A Belgian choreographer is really bucking the trend by accusing the pop star of infringing a copyright to her choreography. How claims over choreography compare to ones made over music, film, and yes, maps.

Pop star Beyoncé is currently defending herself against charges of plagiarizing the work of the Belgian choreographer Anne Teresa De Keersmaeker in the music video, "Countdown."

Since the choreographer went public with charges that Beyoncé plundered movements from two films, Rosas danst Rosas and Achterland, the film's lawyers have contacted Sony about alleged similarities, and there's been tremendous chatter in the press and on blogs about whether the singer is really in legal jeopardy.

But take two steps back, shake your hips, and consider for a moment just how exceptionally rare it is for a choreographer to make a legal move over a dance move.

Yes, choreography can be copyrighted. The U.S. Copyright Office says as much, provided that works are "fixed in a tangible medium of expression from which the work can be performed."

Since dance is a performance art, much of the expression perishes before our eyes. Only those choreographers who have attempted to figure out some sort of notation method to describe the movements or have recorded video of their work are eligible for copyright protection.

Not that many choreographers have tried to get it.

Each year, the Register of Copyrights tracks the number of copyright registrations and publishes a report about the types of activity being submitted to the Library of Congress. The report last came out in 2009, and among the 424,427 works registered with the Library, just 545 of them were classified as "Dramatic Works, Choreography and Patomimes."

Here's a pie graph representing activity at the Copyright Office, where works of choreography hardly show up amidst books, newspapers, films, music, and other material. Map-making might be a dying art, but there are about twice as many maps copyrighted these days than works of choreography! 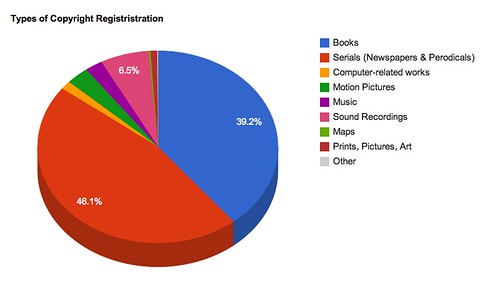 Moreover, most choreographers seem less interested than ever in getting legal protection for their dance movements. Ten years ago, there were actually 22,528 works of choreography registered with the Copyright Office. The most recent annual figure, as stated above, was just 545 works, representing a 98% decline. Hollywood studios are going to the Copyright Office more than ever. Despite the bad ink about the fate of the publishing industry, copyrights over books and periodicals are mostly holding steady. The music industry may really be in trouble, but that's nothing compared to choreography, which despite the success of So You Think You Can Dance and Dancing With The Stars, is showing up less frequently than ever on copyright records. 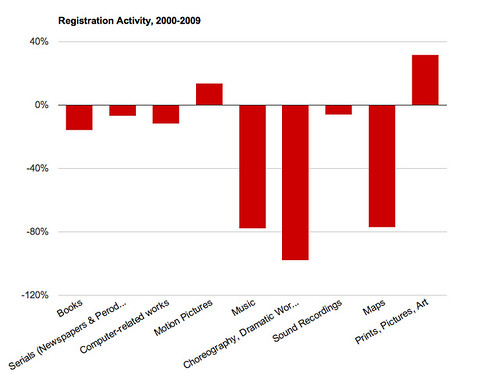 So what's going on? Have all the good dance moves already been taken, is dance as an art form in a state of decline at large, or have choreographers preferred to go outside the copyright system to rely on an ethical approach to being original, where small communities judge honor outside of making copyright claims?

Whatever the answer, it's clear that De Keersmaeker is bucking a trend.

If she does sue over choreography, though, she won't be the first. It's been extremely rare, but there have been disputes in court, such as Horgan v. Macmillan where a judge was asked to figure out whether a book of still photographs could infringe the work of the chief choreographer of the New York City Ballet. In these disputes, maybe because they've been so infrequent, the judges have been mostly fascinated by the question over scope of protection.

Because De Keersmaeker had a film and Beyoncé had a music video, the medium may not be an issue as a prospective judge could look at a comparison of videos -- as many have done for themselves on YouTube (see below) -- and determine whether De Keersmaeker's movements were original and whether Beyoncé's movements showed substantial similarity.

But that doesn't end the case.

Beyoncé will likely claim that even if the choreography was protected by copyright, she had fair use to it. Did she really misappropriate a substantial amount? Did she threaten the market value of the original work? And so on...

The singer is already setting up these arguments, defending "Countdown" as being inspired by many artists.

"My biggest inspirations were the ’60s, the ’70s, Brigitte Bardot, Andy Warhol, Twiggy and Diana Ross,” said Beyoncé in a statement. “I’ve always been fascinated by the way contemporary art uses different elements and references to produce something unique.”

Sounds like a defense that the music video was transformative. These things are judged on a case-by-case basis, and certainly there have been decisions of late that haven't been favorable to artists claiming "fair use" (See the recent cases involving Mr. Brainwash and Rihanna for instance) But lots of artists, from Quentin Tarantino to Dr. Luke, get way with being inspired by historical precedent, so if De Keersmaeker manages to beat Beyoncé over choreography, it will be truly unique. Our guess is that this dispute either settles or just goes away. Does anybody besides us even remember the hullaballoo over Beyonce's underwear video?