Those who have seen A Christmas Story a gajillion times on TBS will recognize the character of Scut Farkus as the kid who threw a snowball at Ralphie and got pummeled with Ralphie's fists.

News that the actor, Zack Ward, who played Farkus, is suing Warner Bros. for misappropriating his likeness in a figurine had us scrambling to find those prized objects in question (as well as the complaint). How exactly did Ward, who was 12 years old when he appeared in the 1983 film, manage to one-up his fellow actors by purportedly retaining the right to his image in the film's merchandise?

Well, according to the complaint filed in U.S. District Court in California:

"It's a generic face on the figurine, and not the actor's likeness, and has been that way since 2006," says a Warner spokesperson in reacting to the lawsuit.

We think we managed to track one of those figurines (pictured below) on eBay. Current bid? $17.95. Seems like a good deal. Could be a rare collector's item soon. 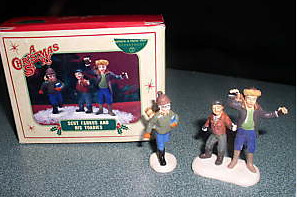