From Star Trek: Discovery‘s fantasy world to For All Mankind‘s alternate history of the space race, VFX supervisors of these series, as well as The Crown and Shadow and Bone, share a look at some of their work. 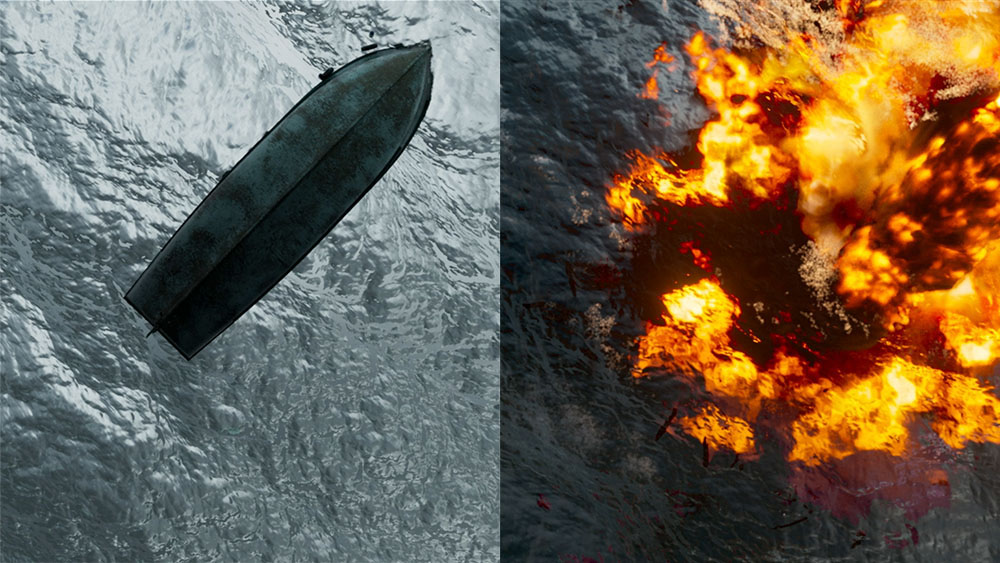 Political events of the late 1970s portrayed in season four of The Crown include the assassination of Lord Mountbatten, by The IRA, tasking the VFX team to create an explosion on a boat, seen from underwater, all in CG. “This required an enormous amount of effects simulations [created in 3D software tool] Houdini, not just for the pyrotechnics and destruction of the boat, but also the swell of the water and interactions with the destruction elements. The result is a violent and dramatic moment in the story, while being sensitive to the history and totally convincing for viewer,” says VFX supervisor Ben Turner.

For All Mankind (Apple)

In this shot from season two, astronauts Gordo (Michael Dorman) and Tracy Stevens (Sarah Jones) are attempting to prevent a nuclear meltdown on the moon. Live action was shot with blue set pieces that were replaced with CG. Additionally, actors on cables and stunt work was filmed at a frame rate of 32 frames-per-second to help create the effect of gravity on the moon. The completed shot includes the CG Jamestown Base and airlock door, as well as the lunar landscape. “The challenge was making sure all the hundreds of minute details were there in 4K — removing the stunt cables, adding 3D cast shadows onto the digital door, seamless transitions from physical to digital set pieces, details in the metalwork, adding highlights on the visors, and the extensive details across the lunar surface,” relates VFX supervisor Jay Redd.

The “Creation of The Fold” flashback involved the use of photogrammetry of a Hungarian palace’s ruins to contribute to the lighting change as dark Merzost particulate overtakes it, relates VFX supervisor Ted Rae of the work on the fantasy series. This shot, created at VFX house Scanline’s Vancouver facility, also involved blending “layers of simulations for the dark particulate itself, the dust and leaves its mass displaces, the ground it ’scalds’ and a foreground tree it shreds and splinters as it rips across the frame. A greenscreen of Ben Barnes being pummeled by air movers served as the shot’s source for what would become The Fold, a scourge that, hundreds of years ago, split the Rakvan countryside in two. Anamorphic flares, halation, distortion and vignetting helped the blend with production photography and to tie the dozens of VFX layers together.”
Star Trek: Discovery (CBS Studios/Paramount+)

“This season on Discovery we ventured more into creature work and on planet set extension and world building,” says lead VFX supervisor Jason Zimmerman. For instance this creature (above) need to be “both scary and at the same time be able to emote at certain key moments to aid in telling the story. We knew we would need to augment the existing creature but as we got more into the process we realized the need to have more freedom in working on the shots, and as such ended up creating a full CG version of the creature and augmenting the original design with various simulations to give it an almost other worldly feel.” The work started with creating a muscle and skeletal system, then adding texture and shading. Other steps involved motion capture for natural movements and adding simulations layers for an “element of mystery.”