Since 2018, lead investigative producer Amy Herdy had been chasing Alison Strickland, a former nanny who had been in Mia Farrow’s Connecticut home on the 1992 day that 7-year-old Dylan Farrow was allegedly molested by her father, Woody Allen. After a series of dead ends in locating Strickland, Herdy had sent a snail-mail letter to the U.K. in 2020, and Strickland finally responded.

It was too late to include Strickland in the docuseries — but it wasn’t too late to interview her for the companion podcast that became an audio hit for HBO, reaching No. 2 on Apple’s film/TV charts.

“We were so lucky to be able to include it and lots of new content,” Ziering tells The Hollywood Reporter. “There was so much to mine, and it was interesting to have a different temporal clock ticking and not worry about all those constraints you have with film.”

Podcasts have been a red-hot commodity for years, spawning such mega-deals in 2020 as Spotify’s $100 million pact for exclusive rights to The Joe Rogan Experience and SiriusXM’s $325 million purchase of distributor Stitcher. Now the trend attracting studios and networks is that of the companion podcast, which offers a new way for creators to diversify IP assets.

“Every company wants to capture as much market share as possible and every lane available,” says Topic Studios head Maria Zuckerman, who oversees film, docs, TV and podcasts for the studio behind The Mauritanian and Missing Richard Simmons.

Creating podcasts for an existing fan base is a plus. “You have a built-in audience hungry for more content,” Zuckerman adds, “but you want to offer them a deeper dive or a different lens.”

Podcast listenership is one of the fastest-growing and most diverse demographics in the entertainment sector despite its largely male and white early origins. According to The Infinite Dial 2021, a media habits survey, 80 million Americans are weekly podcast listeners, a 17 percent increase from 2020.

HBO is heavily invested in the space following its Chernobyl companion podcast, which paved the way for Allen v. Farrow and others and is its most successful so far. Craig Mazin, who created the Emmy-winning Chernobyl miniseries, had more story to tell, and a podcast allowed him to delve into the history-based narrative. For now, some HBO filmmakers aren’t being compensated for their companion podcasts, with the work falling under their marketing commitments. But that’s likely to change as the subgenre blooms.

Netflix also has dived into the space, with fare like The Crown: The Official Podcast and its Behind the Scenes series that tackles everything from Stranger Things to The Witcher. 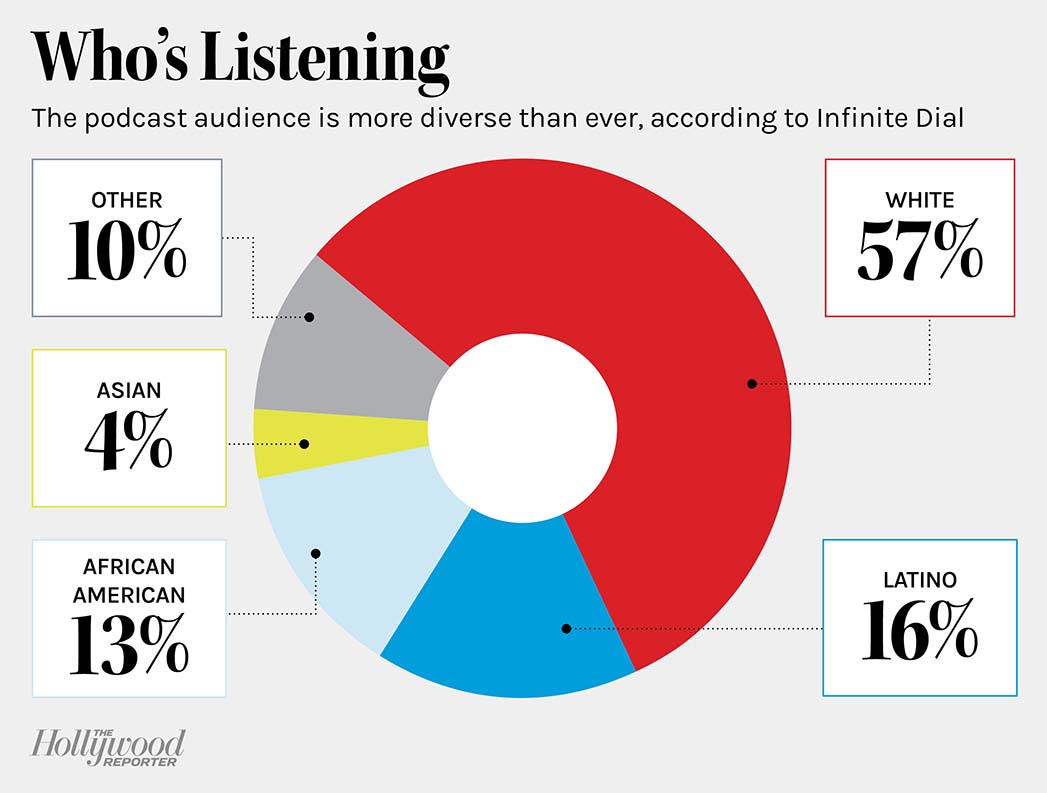 “People want to spend more time thinking and talking about the shows that they’re watching, whether they’re binge-watching it or watching it once a week,” says HBO director of podcasts Michael Gluckstadt, who oversees more than 20, including an upcoming Batman: The Audio Adventures with Jeffrey Wright that ties into sibling Warners’ DC Universe. “It’s on their mind, and it’s a platform that really complements their watching experience.”

HBO enlisted Lovecraft Country staff writer Shannon Houston to work on that series’ podcast, which she hosts with Ashley C. Ford. “There are so many big themes and strange things happening [on the series] that I realized there was a way to do this that isn’t just a recap,” says Houston. The podcast has used episode arcs from the series, which sets horror and supernatural themes in the Jim Crow South, to discuss everything from imperialism and representation to self-exploration as therapy. “It’s meant to spark dialogue.”

Since plenty of hit podcasts have no attachments to underlying IP, Zuckerman says the companion craze cuts both ways, with audio projects (think Serial) now being spun off for TV and film. Topic is adapting Dan Taberski’s Surviving Y2K podcast — which was part of the trilogy that included Missing Richard Simmons and the Peabody-nominated Running From Cops — as a TV series with Taberski, John Lyons and Jay Roach.

Pineapple Street Studios, which has become the go-to shop for Netflix and HBO, produced and co-created The Chernobyl Podcast, Lovecraft Country Radio and all of Netflix’s Behind the Scenes seasons and produced Missing Richard Simmons, Surviving Y2K and Running From Cops. Pineapple also consulted on Allen v Farrow.

“The future is bright for podcasts because people are getting into the habit of listening, and they have the luxury of listening however and whenever they want,” adds Zuckerman, who spends about 25 percent of her workday on podcasts. “There’s more competition but also more buyer and audience appetite and more opportunity for producers than ever.”