The year is 2055. Earth is seemingly headed for environmental catastrophe. Humanity’s hope of survival is an mass exodus, and the last ship is about to leave. That’s the premise for Last Flight Out, the upcoming Dark Horse comic from veteran TV writer-producer Marc Guggenheim and artist Eduardo Ferigato.

The Hollywood Reporter has the first trailer, which reveals the scientist behind Earth’s salvation ships has 24 hours to find his daughter and bring her aboard before the ship leaves forever. Guggenheim cites the ship from the 2008 Pixar film Wall-E as inspiration for the premise.

“I figured at some point that ship had to leave Earth and everyone got on the ship,” Guggenheim tells THR. “And I started thinking what if someone didn’t? What if someone missed the boat?”

How The CW's 'Crisis on Infinite Earths' Is Jumping to Comics

2020 was already going to be a transitional year for Guggenheim. Arrow, the CW show that he helped blossom into a TV universe, was ending, and he was itching to work on a creator-owned comic. Then the coronavirus pandemic upended the world and Guggenheim found himself at home rather than in production for the first time in quite awhile.

He decided to self-fund the comic, paying his collaborators out of pocket and delaying finding a publishing partner until later. He happened to have a general Zoom meeting with Dark Horse’s Mike Richardson and Keith Goldberg. Guggenheim wasn’t intending to pitch Last Flight Out, but the title came up and the Dark Horse team seemed enthused.

For Guggenheim, who counts HBO Max’s upcoming Green Lantern on his schedule, there was something freeing about escaping into comic book writing. He speaks fondly of his CW days but also acknowledges its challenges.

“When you are doing 22 episodes a year, you have five episodes in progress at any moment in time,” says Guggenheim. “That translates to a pretty major deadline every three days. That’s crushing.”

Last Flight Out was a more relaxing schedule.

“I love telling stories and the medium of comics. There’s a certain structure and almost math to the number of panels to the page. The use of page turns and the use of double pages turns. You just have all these narrative tricks that are built into the medium that you can play with.”

The first installment, which launches Sept. 8, is six issues. Guggenheim found that once he finished, the ideas just kept flowing.

Says the writer: ” It’s weird to be thinking about an idea for so many years, and only once I start writing it do I think of ways of continuing the story.” 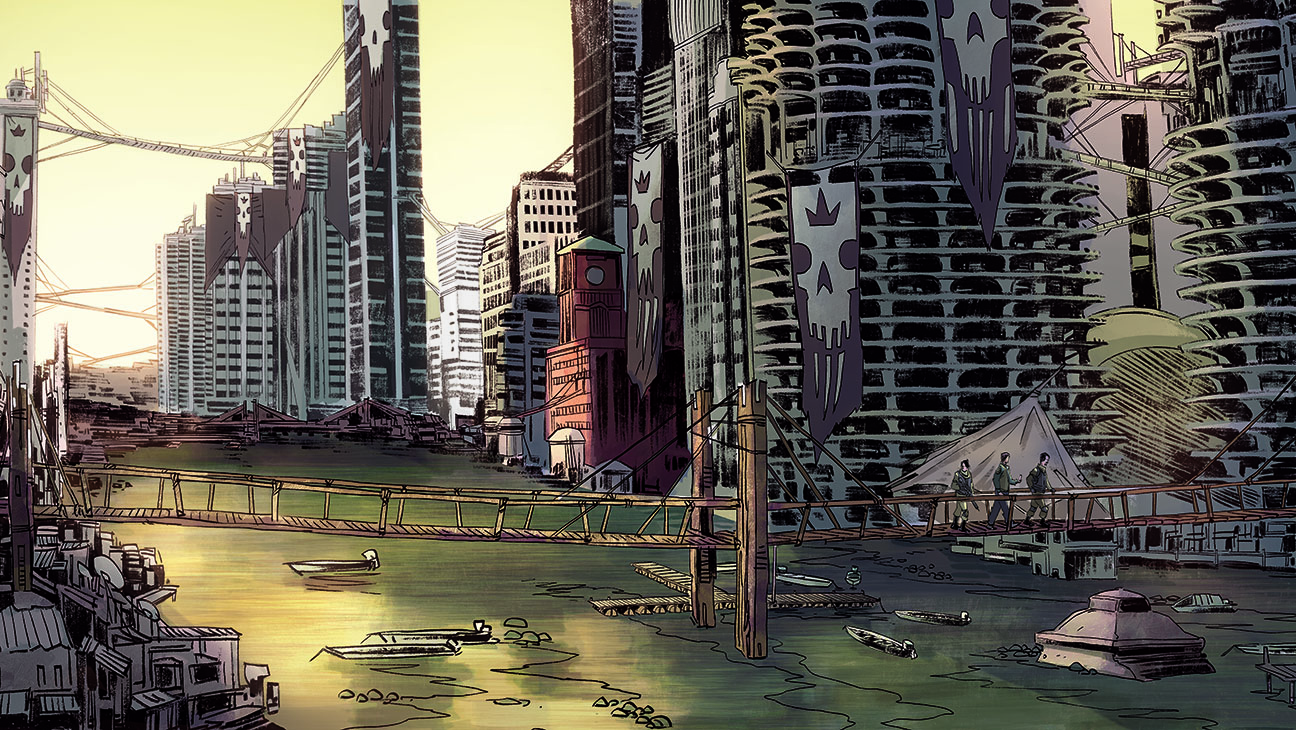