In July, I interviewed Stephen Colbert as he was preparing for live telecasts of CBS’ Late Show for the political conventions. He was still less than a year into his tenure as David Letterman’s replacement, and both ratings and buzz remained far behind the frontrunning Tonight Show on NBC. A hot rumor at the time was that his slot would be flip-flopped with his lead-out, James Corden. In conversation, Colbert was more upbeat than the public narrative would suggest. But criticism about his performance — “I’m a human being. Yeah, I care,” he said at the time — clearly was wounding.

What a difference eight months and the election of a reality TV star makes.

As I sit with Colbert in early April in his 12th-floor corner office above the Ed Sullivan Theater in New York City, he has just notched his ninth consecutive week as the most watched late-night show on television. He’s animated, focused and much more relaxed, like a man who has rediscovered his purpose. “What a privilege to be on TV right now,” he says.

In February 2016, several days after a huge post-Super Bowl audience watched an awkward and rambling Late Show, CBS chief Leslie Moonves invited Colbert to dinner at the 21 Club. The host was ushered into a private room where Moonves and Glenn Geller, the network’s entertainment chief, were waiting for him at a small, round table. “It looked like I was going to be assassinated,” recalls Colbert. “I said, ‘This really feels like a scene from Goodfellas. There’s no plastic on the floor, is there?’ “

Moonves came prepared with specific notes, and one that still stands out for Colbert was a critique that a bit with Will Ferrell was too long. “He goes, ‘Two-thirds would’ve been enough.’ And I said, ‘You’re two-thirds of a genius.’ ” Moonves also insisted that Colbert hire a showrunner to help manage the enormous workload of a five-day-a-week broadcast program, and a few weeks later, Chris Licht, then executive producer of CBS This Morning, was brought in.

Licht’s stabilizing influence was felt by the staff immediately, but it wasn’t until the conventions that the audience started to perceive it. “The live shows forced all of us, every part of this operation, to start firing on all cylinders because there’s no room for error, and they gave the show a certain sense of urgency,” says Licht, who encouraged Colbert to be his genuine self onstage. 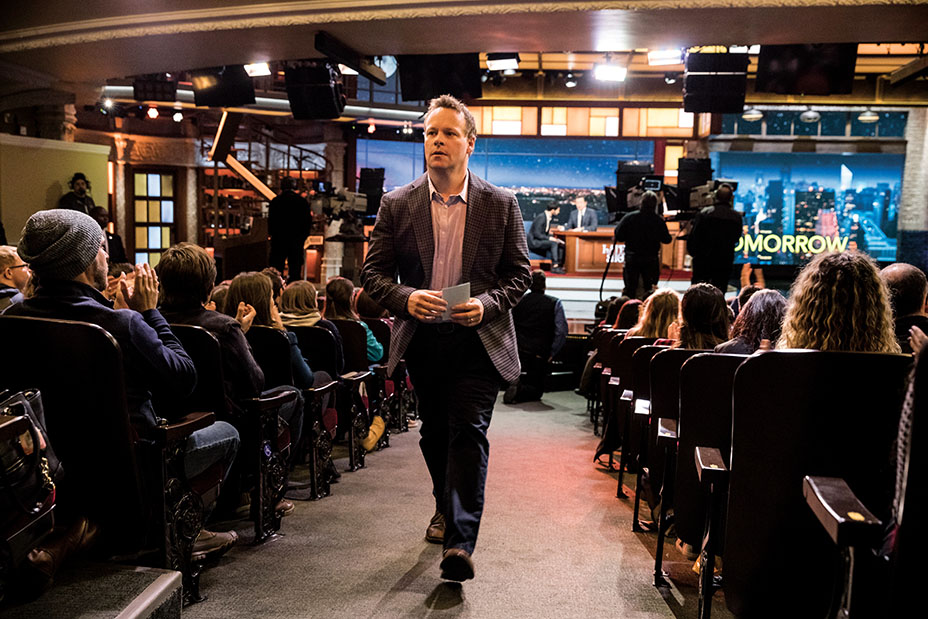 Since then, Colbert’s monologue has become a nightly deconstruction of the existential angst his audience is feeling about Trump’s presidency. The comedy bits, too, have become much more topical and biting; several have featured cameos from pal and executive producer Jon Stewart.

By the first week in February, shortly after Trump’s inauguration, Colbert had edged out the apolitical Jimmy Fallon (who wasn’t helped by his widely mocked tousling of Trump’s hair during the campaign) by 20,000 viewers, the first time The Late Show topped The Tonight Show since Colbert’s massively hyped premiere in September 2015. Though Fallon retains a narrow edge among viewers 18-to-49, Colbert’s streak now stands at 10 weeks. In the first quarter, Late Show averaged 3.29 million viewers a night compared with The Tonight Show‘s 3.02 million, a 17 percent year-over-year jump for Colbert and a 17 percent sag for Fallon. “All those naysayers who were writing him off — not fair,” says Moonves. “I knew there were growing pains. Was I concerned? Of course. Was I worried? No.”

Trump may have been the catalyst. “We were ready for something that galvanized people’s attention and changed their priorities,” says Colbert, 52. But during the course of our hourlong interview in his Ed Sullivan office, he also was characteristically modest: “You think you know what you’re doing, but until you do it, you don’t really.” 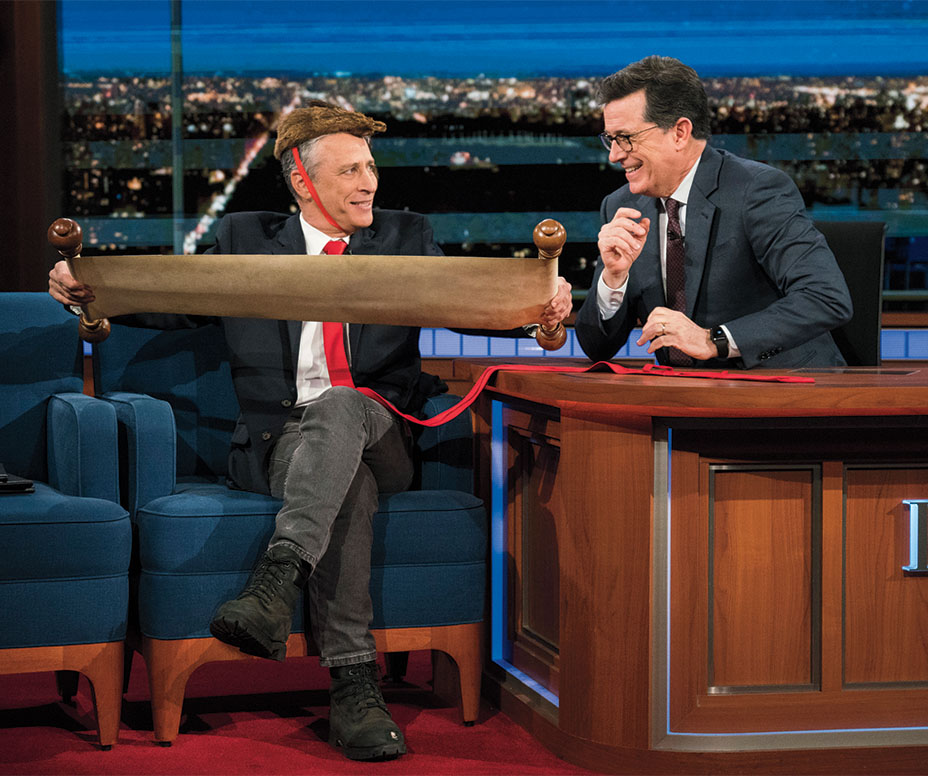 So how do you feel?

I feel great. The last time you were here, we had just put our foot on the accelerator. Chris had been here for a few months, we’d kind of defined everybody’s lanes, gotten our ducks in a row, for want of a dirtier metaphor. And that changed everything. We got ambitious. It did the trick for us. We just said OK, we won’t stop. We will just maintain that level of urgency and that pace. That prepared us for when the unthinkable happened.

Election night was quite a night. You were live on Showtime as it unfolded.

Yeah. That night is sort of a separate beast. But that urgency that we captured in those two weeks [in July] changed everything for us. It reminded us [that] there’s a whole other level to play at. 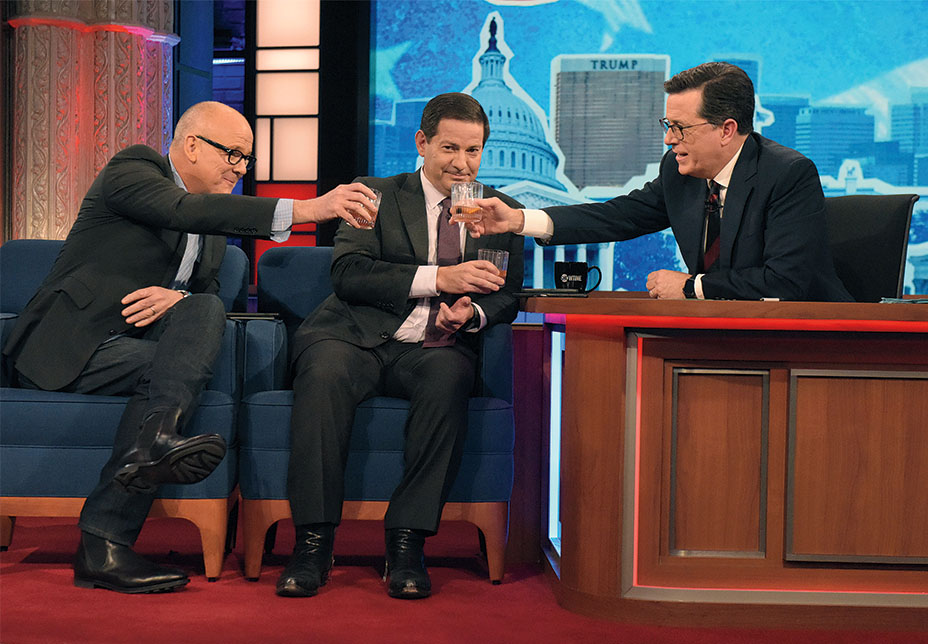 I could see it on your face as you were sitting there and it began to dawn on you — on all of us — that Trump was going to win.

We had a framework for four different shows that night: Hillary wins, and we know it; looks like Hillary’s going to win, but we don’t know it; Trump wins, possibly, but it’ll be a long time before we know because the path is so narrow and Alaska is going to have to come in and who knows. Then the fourth one is that Trump wins, and we know it. We just said: “Well, don’t even write that fourth one. Because I’m not saying it can’t happen, but let’s just say if it does happen, I’m going to be speaking to an audience that are like villagers who’ve been dragged into the soccer stadium in Chile to watch people be executed.” It’s going to be the darkest room you could possibly [imagine]. And I said (knocks on his desk), “Knock on wood we won’t have to do that.” I said, “Look, man, we’re really going to be in trouble if he wins, because we have no plan, and then we will be forced to just be raw. We’ll find out who the f— we are.”

We all found out who the f— we were that night.

Exactly! The election felt a little bit like somebody dying because you suddenly have an unreal feeling. It’s unreal and yet absolutely as real as possible at the same time. You feel very raw and very base, very awake and dreaming at the same time. We’re about 20 minutes into the show — we did an [80-minute] show — and there’s an hour more with no material, and I’m just talking to people who are catnip to trolls because they’re seeing us publicly upset. We had no commercial breaks. I’m like, “I’ll just start talking and see what happens.” And Chris and I were like, “OK, so that’s the show now. The show is me absolutely not hiding at all how I feel about this and just raw.” That was what that night was for us. I wouldn’t wish it on anybody. (Laughs.) Hardest f—ing thing I ever did.

Now Trump is in the White House, and you’re beating Jimmy Fallon. What did you do the first time you beat The Tonight Show?

We bought pizza for the staff. And we’ve bought pizza every week. How about that? And that’s great, but we’ve [always] got another week of shows to do. Honest to God, it’s like, “Hey! Pizza! But remember: Maybe next week, no pizza. But it doesn’t mean we’re not doing great.”

Do you owe Donald Trump a thank-you note?

(Long pause.) No. I would trade good ratings for a better president. How about that? The interesting thing is that when we were prepping all that time, we weren’t waiting for Donald Trump. We were waiting for something that everybody cared about. Do you know what I mean? Donald Trump is epoch-making; he changes everything. And so we were ready for something that galvanized people’s attention and changed their priorities. The thank-you note is to my staff for being ready — that’s the thank-you note. Because if it’s not Donald Trump, it’s something else. There will be something else that we care about, hopefully happy, possibly tragic. But we’re ready to talk about what just happened, whenever it happens now. And that’s what we’ve learned. And so my thank-you note is not to Donald Trump. He can go with God.