“I felt it immediately,” says Tyler Perry, tapping his heart with a fingertip. “I knew this is where I had to be.”

He’s behind the wheel of his white Bentley Bentayga, giving a tour of his 330-acre studio at the old Fort McPherson Army Base on the southwestern edge of Atlanta. Perry, 47, bought the property in 2015 for $30 million; he won’t say how much he’s spending to turn it into his new state-of-the-art production complex — except that it’s “a lot.” Winding the SUV past earthmovers and through mud puddles, he pulls up to four still-under-construction, 20,000-square-foot gray concrete soundstages. Eight more will sprout up before the end of this year, for a total of 12, including one behemoth 60,000-square-foot stage with a built-in water tank. When it’s completed Tyler Perry Studios will be five times the size of his old studio on the other side of Atlanta (which he left last year). Indeed, it’ll be twice the size of the Warner Bros. lot in Burbank.

“I call it Tyler Town,” says Oprah Winfrey, whose HBO movie The Immortal Life of Henrietta Lacks was shot on pre-existing structures on the property (which, ironically, served as a Confederate Army base during the Civil War). The current season of AMC’s The Walking Dead shot exteriors here, as well. And inside the “dream building” — which houses the corporate offices and several floors of sets — Perry is producing six of his own series; five shows for Winfrey’s OWN network (The Haves and the Have Nots, If Loving You Is Wrong, Love Thy Neighbor, For Better or Worse and, bowing next year, The Paynes) and one for TLC (Too Close to Home).

Not bad for a poor kid from New Orleans who spent his 20s performing his own plays on the so-called Chitlin‘ Circuit (a term he embraces). His onstage characters — particularly a certain loud-mouthed grandma named Madea — attracted a huge following, especially in the South, before Perry came to Hollywood and landed a deal with Lionsgate to adapt his stage play Diary of a Mad Black Woman into a 2005 film. Within a year, he was expanding into TV, with the syndicated sitcom House of Payne. In the years since, Perry has produced 945 episodes of television and made 18 feature films (his most recent, Boo! A Madea Halloween, which also was shot here, grossed $73 million, bringing the franchise total to $448 million). All in all, you’re talking about an entertainment enterprise that so far has raked in more than $2 billion. 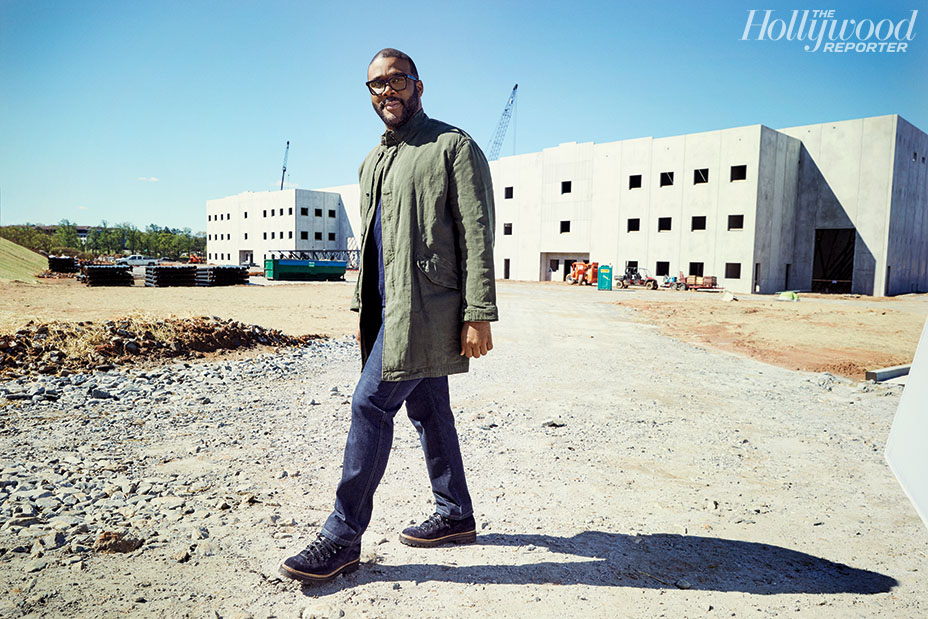 Output, however, even on this humongous scale, isn’t the only reason Perry is THR‘s TV Producer of the Year. There’s also control. TV might be a producer’s medium, but few others have his near-total autonomy. For starters, he writes virtually everything himself — usually from his compound in the Bahamas (he also has homes in Los Angeles and New York’s Tribeca, where his longtime girlfriend, Gelila Bekele, and their 2-year-old son live). And he has final creative say about what appears on the screen. “I don’t get notes,” he says bluntly. Not even from Oprah. (“I started out in the beginning asking to see the scripts,” says Winfrey of working with Perry on his shows for OWN. “That didn’t work out so well for me.”) Perry also directs his own shows, something few other producers or writers do — and does it faster than just about anyone. Most network dramas take a week to 10 days to complete; Perry shoots an episode a day, saving millions from production budgets. “I direct every scene,” he says. “There’s nobody else helping me. I’m doing it all.”

After driving around his new complex for about an hour, Perry sat down with THR in his cavernous office and talked about everything from his career role models (he still has a soft spot for Bill Cosby) to the time he worked as a used car salesman (the job didn’t last long) to how the characters he creates seem to have minds of their own. As he puts it, “I’m just hearing them tell the story.”

How do you manage to have so much control over your productions? It’s a very un-Hollywood way of operating.

Because I know my audience. And I think that if more artists were free to just be raw, some of the stuff that would show up would be phenomenally successful. But if you’re telling me some notes about “change this word” or “don’t do this” or “she can’t wear that”; there’s no way I could operate in that system. Because you’re talking to a guy who has performed 300 performances every year, who was seeing 30,000 people every week in arenas, laughing, listening, hanging on every word. It was my college and my education. So I don’t think you can tell me this is a better way for this story if you’re trying to reach my audience. 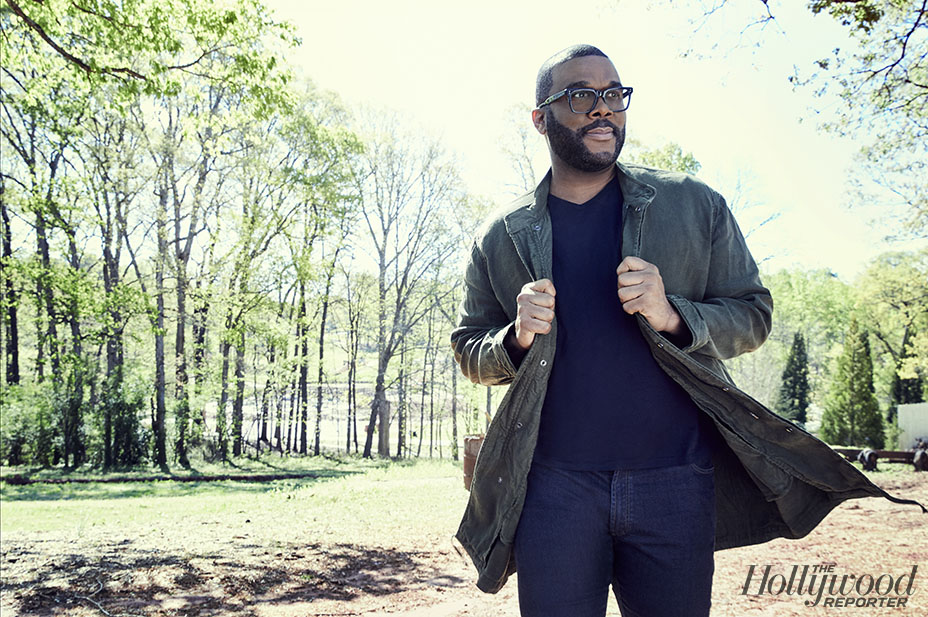 Who was the first person who ever took a chance on you in the industry?

It would be Mike Paseornek at Lionsgate [which produced and distributed Perry’s first feature, 2005’s Diary of a Mad Black Woman]. I was famous among my audience. My shows were selling out. I couldn’t walk down the street [in Atlanta]. People are yelling out of cars and chasing me down the street. And I go to L.A. [to pitch Diary] and nobody knew who I was. And I’m like, “OK, fine. I’m not doing this anymore.” But my agent calls and says, “Listen, I want you to take one more phone call.” So I’m on the phone with Mike, and I say, “Listen, I’m not changing anything in my script! And this is what I want to do, and it’s got to be done like this!” And at the end of the conversation, he says, “OK.” I was like, “And I’m going to pay for half of it!” He says, “OK.” “And I need to own it!” “OK.”

Who were your role models in the business?

Hands down, Cosby and Oprah. Because we had the same color skin. It let me know that it was possible. I could look at Steven Spielberg, whom I admire, and I’m blown away by what he does, but at that time, I didn’t think I could be Steven Spielberg. That wasn’t an example that was set for me. But seeing someone with my same color skin make it, be successful, own their product, own their show and have their own path made me go, “OK, there’s something here, and you can do it, too.”

Did the revelations about Cosby change how you feel about him?

It’s such an awful situation. It’s so sad; you have all of these women saying all of these things. … All I can say about it, it’s heartbreaking at so many levels.

Is there a piece of advice that Oprah gave you early on that has stuck with you?

Yeah. Sign your own checks. Watch your money. But she wasn’t even talking to me then, it was an interview with Toni Braxton or someone. Every month on the 1st and the 15th, I’m sitting right there at that desk with a box full of checks. And at this point, it’s probably about 2,000 checks. Some people, they’re in show business, but they’re all about the show and nobody’s paying attention to the business. 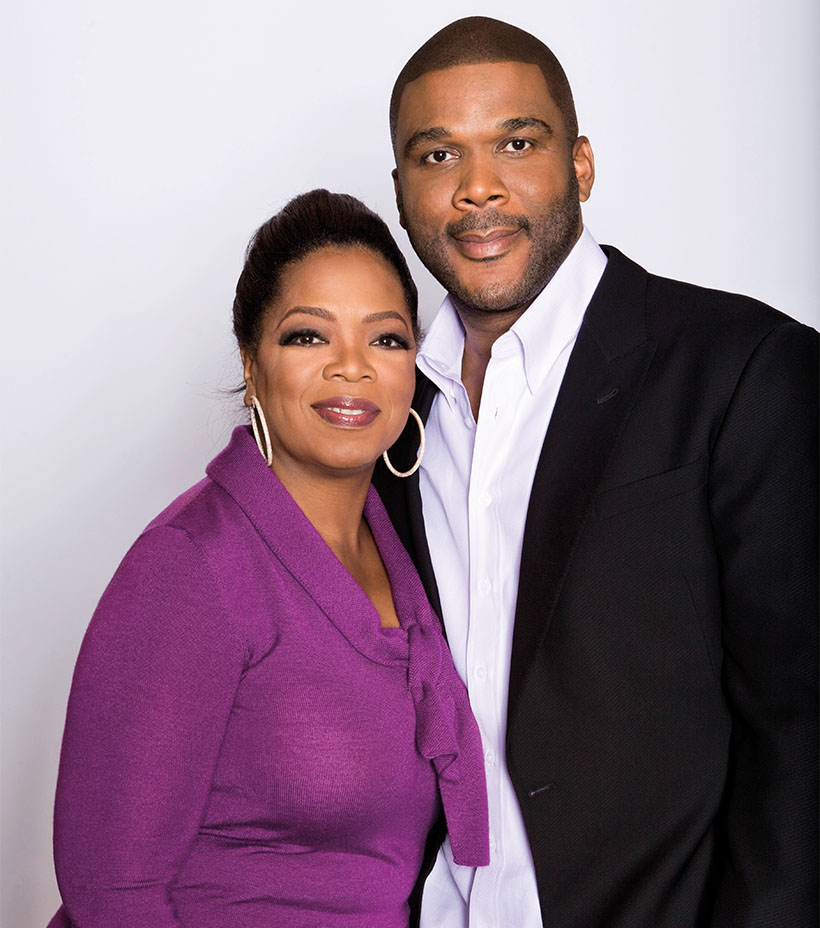 At what point did you realize you had a head for business?

When I was young, my father worked as a subcontractor. He would build these houses and he would come home so happy with $800. But then I watched the man that he built the house for sell the house and make $80,000. I always wanted to be the man who owned the house and not the man that he paid to help build it. I’ve made mistakes. I paid for college 20 times over in mistakes that I’ve made in learning how to run a company, how to be a leader.

Do you use writing as a sort of therapy?

Yes. All of these characters in my head, they allow me to be as crazy as I want to be. You know, they can do anything in these shows, which is fun and free. I can disassociate from everything else and hear these [characters] talking. I’m just hearing them tell the story. And then I go back and see if it makes sense and try to form it into something. I have a place in the Bahamas. That’s when I get most of my writing done. I just turn off and I’ll go down for four or five weeks at a time and just write and write. There’s no internet — unless I want it. Nobody’s calling, it’s just me out in the middle of nowhere.

There often is an inverse relationship between popularity and critical buzz. Do you wish you had more of the latter?

I don’t give it much thought because if I let that stuff get to me, oh boy. It would shake my foundation, have me thinking outside of my own narrative, which is scary in the sense of that’s when you’re giving other people power.

But does the criticism bother you?

Yeah, absolutely. But I walk around here [the studio] and go, “OK.” 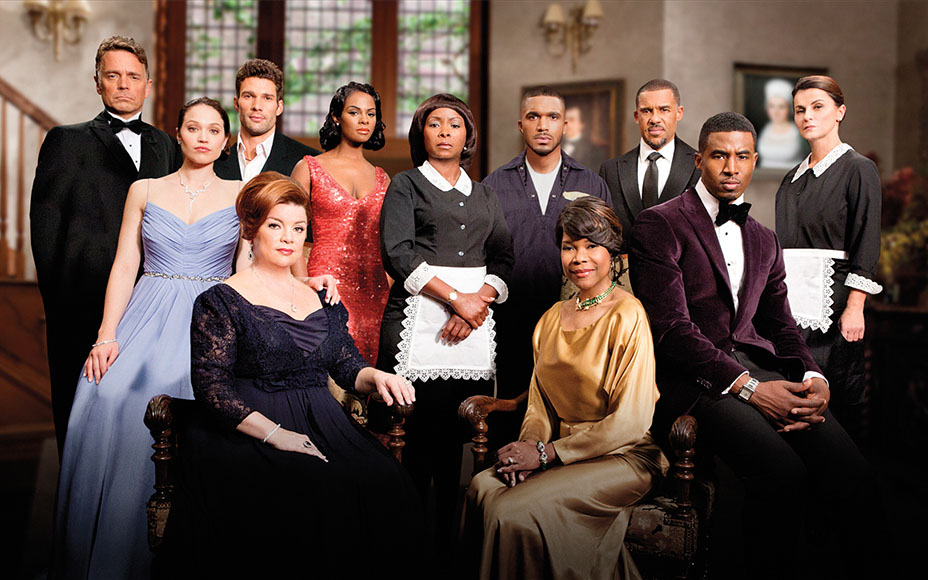 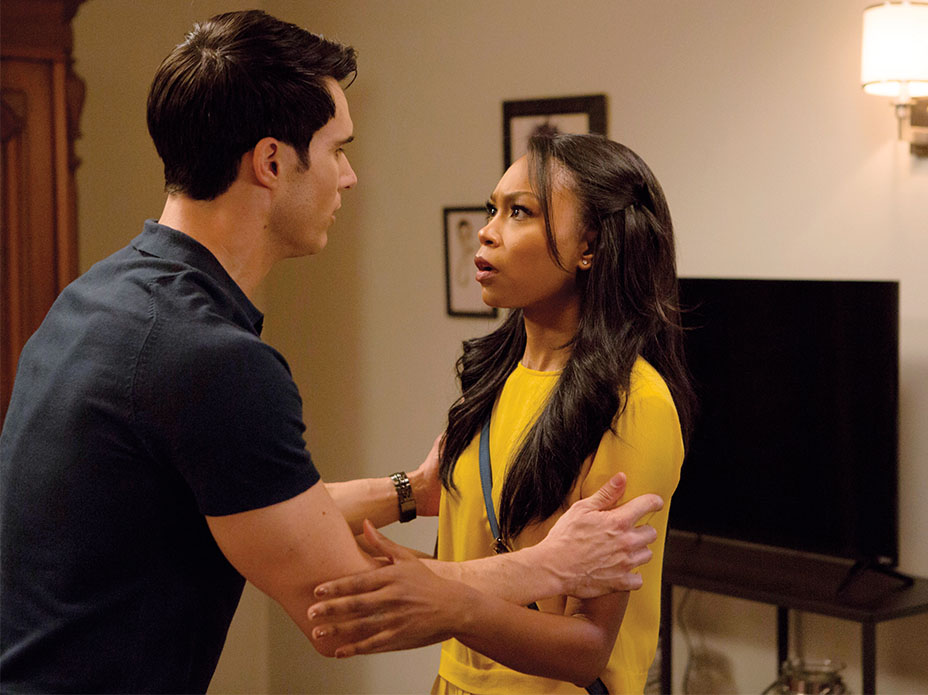 You said in 2009 after the election of Barack Obama that he was judged on the “content of his character, period.” So now here we are in 2017, and race is an issue again — do you feel that we’re going backward?

No, I feel that everything that was under the surface is showing. There is anger in the country that is just finding a voice and finding a way to sprout and grow. And it’s dangerous. And you have to be very, very careful when you start walking that path.

Do you think that Hollywood has respect for the African-American audience? 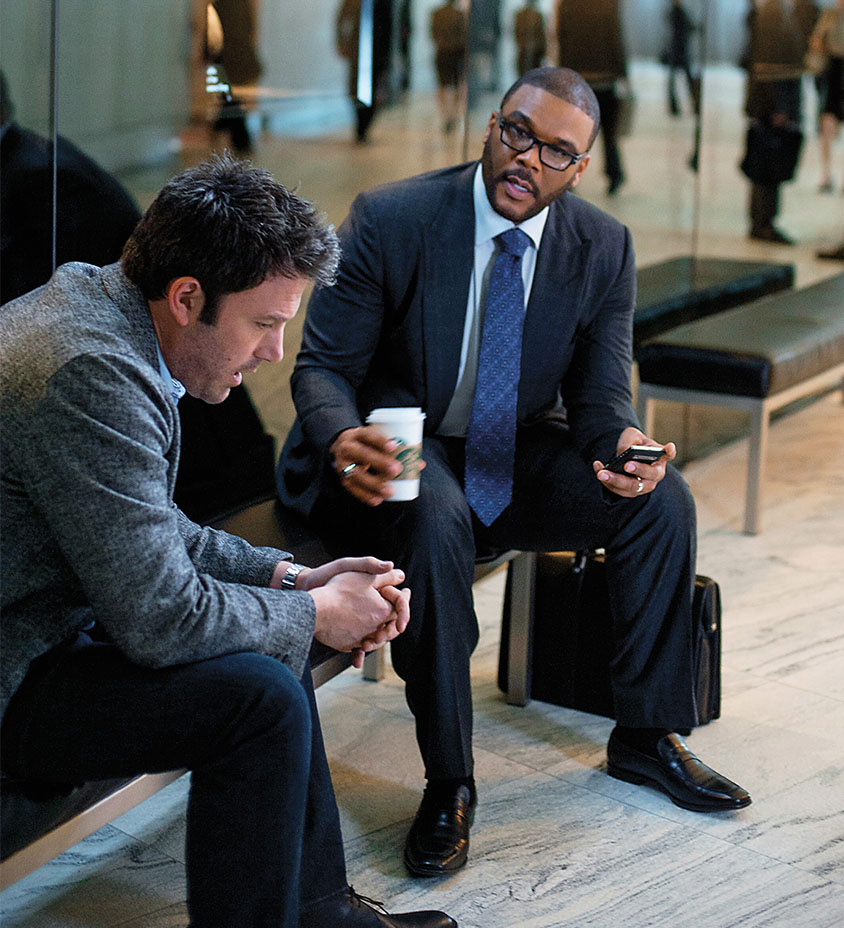 What was the worst job you ever had?

Used car salesman because I couldn’t dupe people. I just wasn’t good at it. [I was in my] early 20s; it was in Atlanta. I’ll never forget this schoolteacher; she had saved all her money and she wanted this car, and I knew it was a bad car, and I was trying to talk her out of it. And my manager gave me a ripping for it.

What’s an average day like now for Tyler Perry?

I’ll come in at 6 in the morning, and we do our spin class in the morning. We’ve got our own instructor; it’s a good thing for the crew to get them started. We’ve got about 25 bikes down there. And then I shower, breakfast and I’m right on to set. I try to be out of here by 10 and in bed by 11. 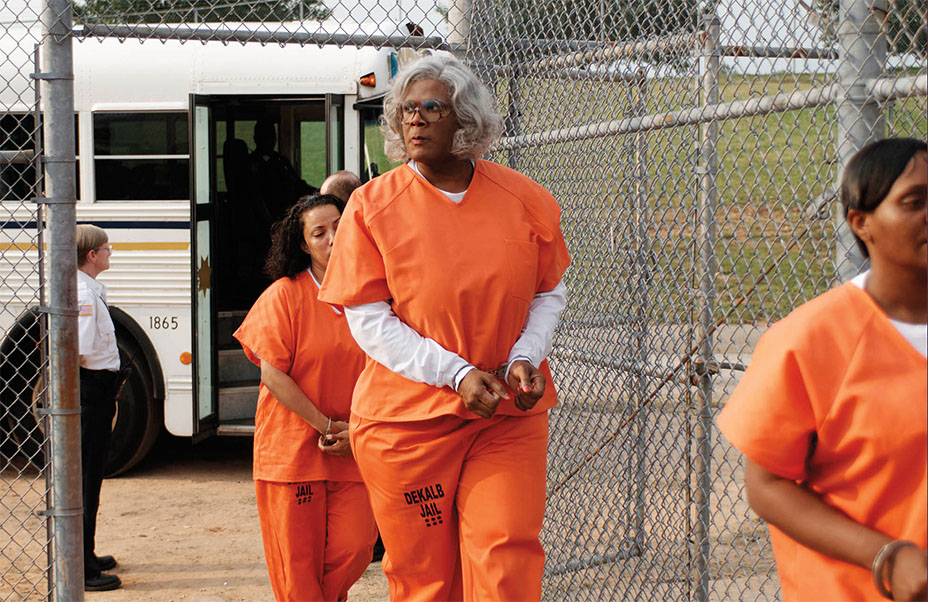 At one point in your past, before you became successful, you were living in your car. Is all of this still a little surreal for you?