“For a girl who’d just moved to Los Angeles, Western Costume was like the Willy Wonka Chocolate Factory of Hollywood,” says Oscar-nominated Black Panther costume designer Ruth E. Carter of the 120,000-square-foot “treasure trove” in North Hollywood that includes a dedicated library, milliner, cobbler and 2.5 million costumes worn by stars from the Golden Age onward. “As you walked around, you’d hear on the loudspeaker names of designers being paged,” adds Carter, who asked the costume supplier to make the split-toe boots of the Marvel best picture contender’s Dora Milaje warriors. “Hearing that [A Clockwork Orange‘s] Milena Canonero or [The English Patient‘s] Ann Roth was in the building, you kept hoping they were in the next aisle. It’s this magical place where not only stars came in to be fit, your heroes were doing their artistry.”

Whether it’s Oscar winners like 1939’s Gone With the Wind or recent popcorn fantasies like both Fantastic Beasts films, chances are the clothes adorning the characters have been loaned, replicated or custom made at Western Costume. (Only costume designers, costumers and stylists on working productions can browse and rent without an appointment.) “What makes us stand out from our competitors is that, over the last 30 years, I’ve bought 11 companies that were costume rental companies,” says president Eddie Marks of the comprehensive collection that experts say remains unrivaled by such Los Angeles costume houses as Palace Costume, American Costume Corporation and Motion Picture Costume Company. A former costume supervisor, Marks is also the father of Branden Marks, a costume supervisor on CBS’ S.W.A.T. (who of course uses his dad’s company).

Founded in 1912 by L.L. Burns, a trader of Native American goods, and originally located downtown — then in a building adjacent to the Paramount lot — the cavernous space allowed Oscar nominee and costume designer Mary Zophres to source the perfect wide-brimmed cowboy hat for Netflix’s The Ballad of Buster Scruggs. Costume designers — and makeup artists, hairstylists and even fashion designers — peruse the library, stocked with books, catalogs, out-of-print magazines and show bibles filled with illustrated materials and notes put together by the likes of costume designer Janie Bryant for Mad Men, the meticulously accurate 1960s AMC series. Or they might reference the growing Star Collection of vintage pieces, from the Oscar-winning creations that Irene Sharaff did for 1961’s West Side Story to Marilyn Monroe’s costumes for 1959’s Some Like It Hot by Orry George Kelly (aka Orry-Kelly). Each item at Western Costume, from weapons to waistcoats, costs a set amount to rent (fees range from $150 to $700 for a complete outfit or weaponry), but contracts stipulate that borrowers have to pay up to 10 times the fee if they return a damaged piece.

“What’s really depressing at the end of a film is you walk away from the costumes and it’s like walking away from your children,” says Sandy Powell, who this year boasts Oscar nominations for both The Favourite and Mary Poppins Returns (the latter of which was sourced from Western). “I quite like that there are some pieces that are preserved.” 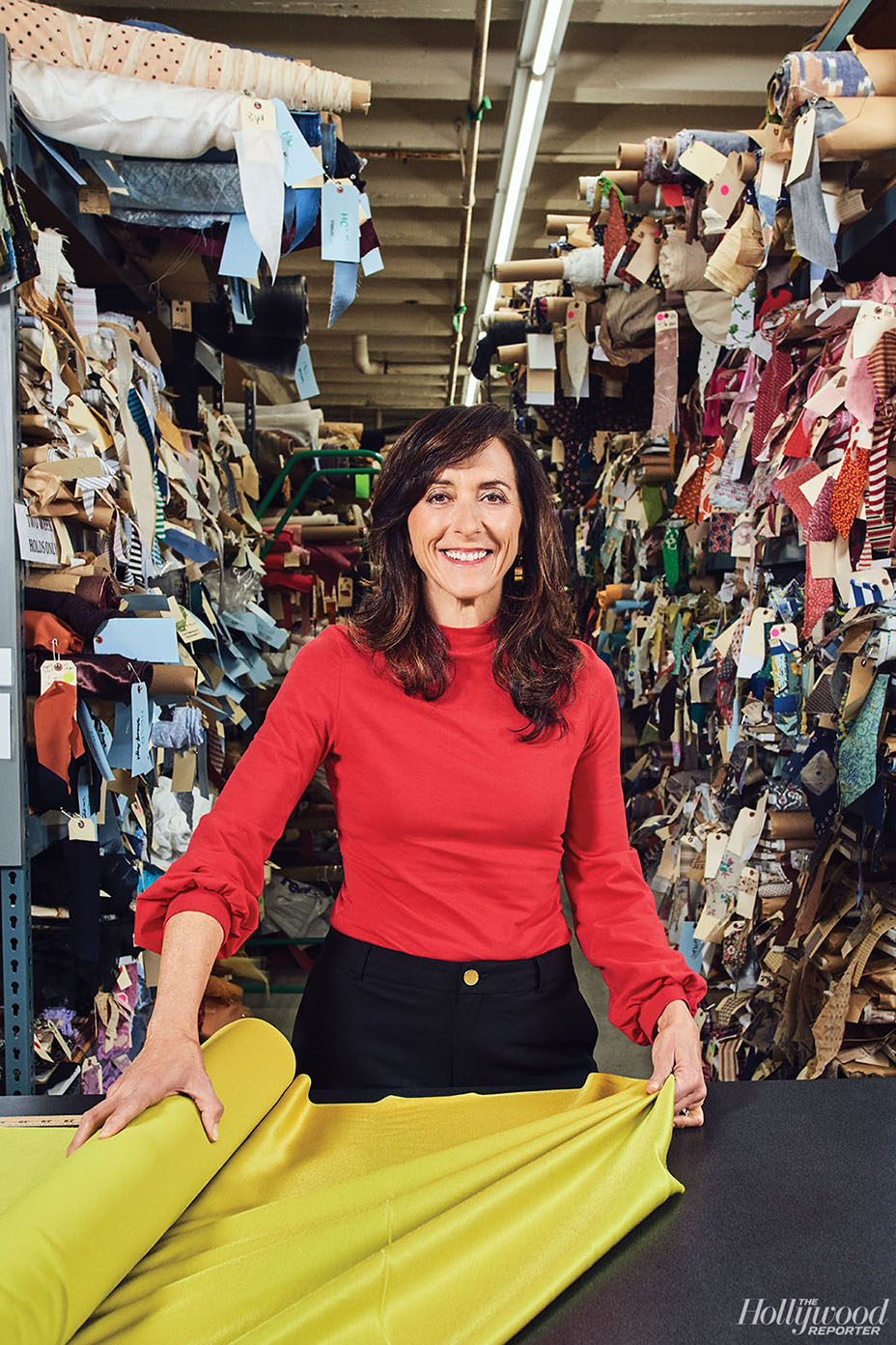 Receiving queries and tips from sellers and clients, Western Costume president Eddie Marks focuses on building up the inventory of vintage clothing, patterns and fabrics before they disappear. “It is important to see how garments were made at a certain time period — the sizing, etc.,” says Mad Men costume designer Janie Bryant of the value of period-accurate togs, because “it makes the actor hold themselves differently if the rise in the trouser is higher than what men wear today.” 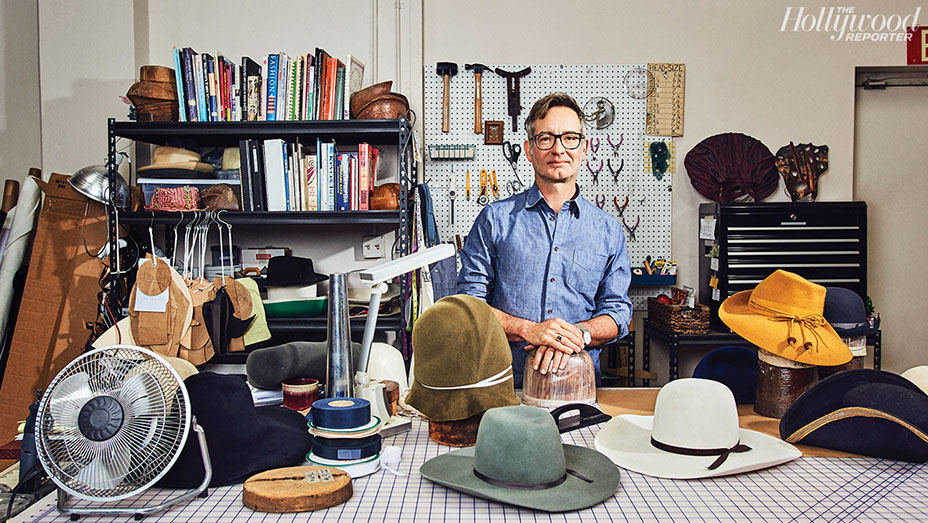 Hatmaker Patrick Rogers and his assistant create headwear that includes the complicated — it took costume designer Paco Delgado seven weeks to create Reese Witherspoon’s headpiece for A Wrinkle in Time — to the absurd: “fun and futuristic” and like “a Russian cosmonaut” is how Rogers describes the hats he made for costume designer Albert Wolsky’s upcoming astronaut film with Brad Pitt, Ad Astra. 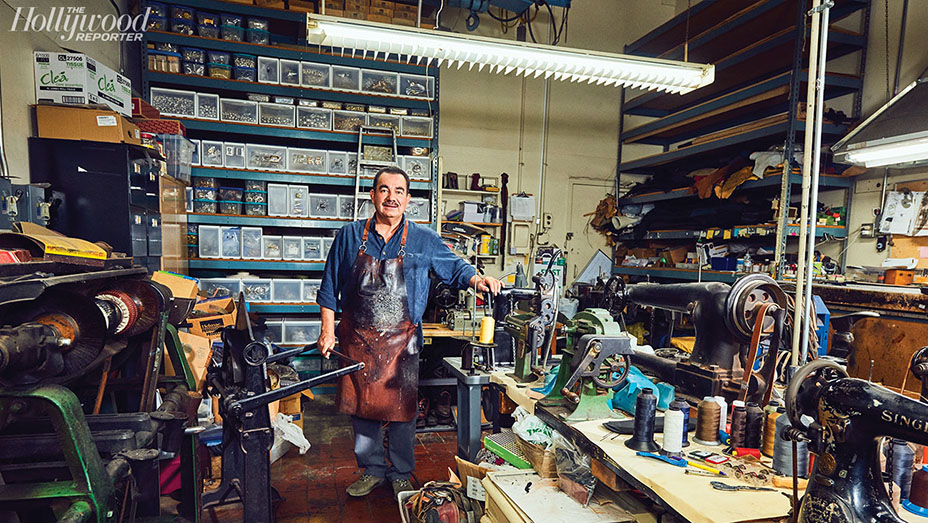 Mauricio Osorio, the grandson, son and brother of shoemakers, has had a hand in creating some of Hollywood’s most unusual footwear during his 40-year tenure, from Michael Jackson’s boots to the shoes of The CW’s Supergirl. Showing the different sizes of molds for footwear worn by Reese Witherspoon and Shaquille O’Neal, he says, “What we do here is not what you find in the market.” 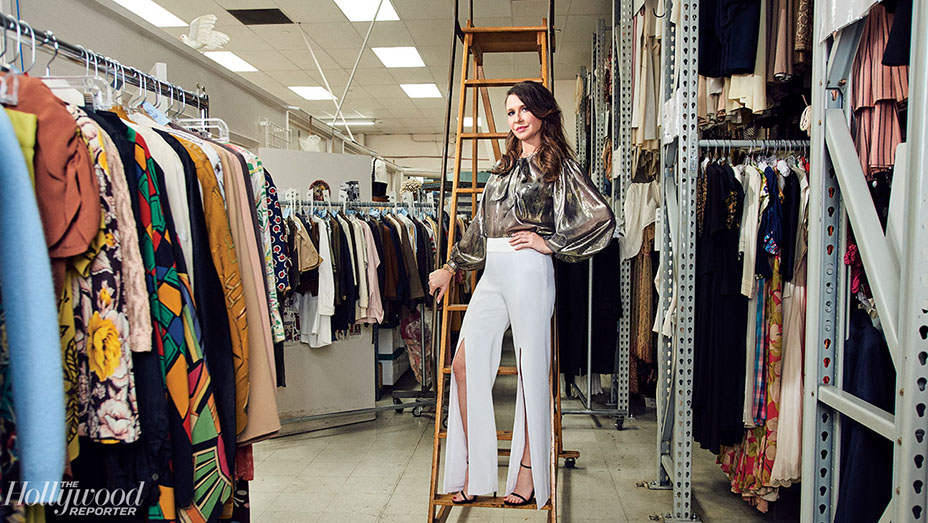 Western’s mission to collect iconic items to preserve in its temperature-controlled, 2,000-square-foot Star Collection began with identifying 3,000 pieces of value. Leighton Bowers, Western’s director of research and archive, says that the collection now contains upward of 5,000 items. Mishaps can ensue with costumes that are not properly documented: A tailcoat labeled only “Christopher Plummer” was almost dismissed as not being from The Sound of Music. Bryant, some of whose Mad Men pieces are preserved, says that finding a bow tie labeled “Gregory Peck” on the floor while pulling costumes for HBO’s Deadwood made her more diligent with labeling. 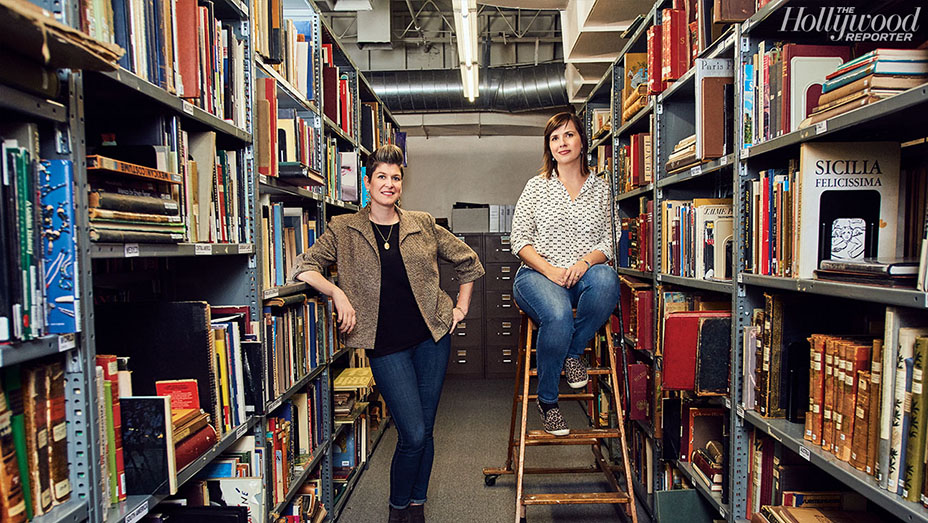 “Costume designers use so much research because they want to be authentic,” Marks says. In the old days, because of budgetary or time constraints, designers would put zippers on pants although the fastener hadn’t yet been invented in the time period in which the TV or film project was set. Around the 1970s, the craft began to be taken more seriously and it became common for costume designers to “look into how things were made in the period that they were [depicting],” he says.

Carter turned to Western’s library to look into “anything they had about the ancient indigenous tribes” of Africa when she and her team researched what would become her Oscar-nominated costumes for Black Panther. “Our library caters to anything related to dress,” says Bowers of the 30,000 books, catalogs, clippings, notes and periodicals that cover “clothing, uniforms, film, sewing, fashion, military, photography, culture, travel.” They also include “swatch books dating as far back as the turn of the century, as well as truly one-of-a-kind photos and drawings of uniforms for the police, hotel employees, federal agencies, medical workers [and] all kinds of occupations over the past 100 years.”

Most popular checkouts? Back issues of Sears and JCPenney catalogs, because, Bowers says, unlike fashion magazines, their clothes “were available throughout the country, to people of various means.” 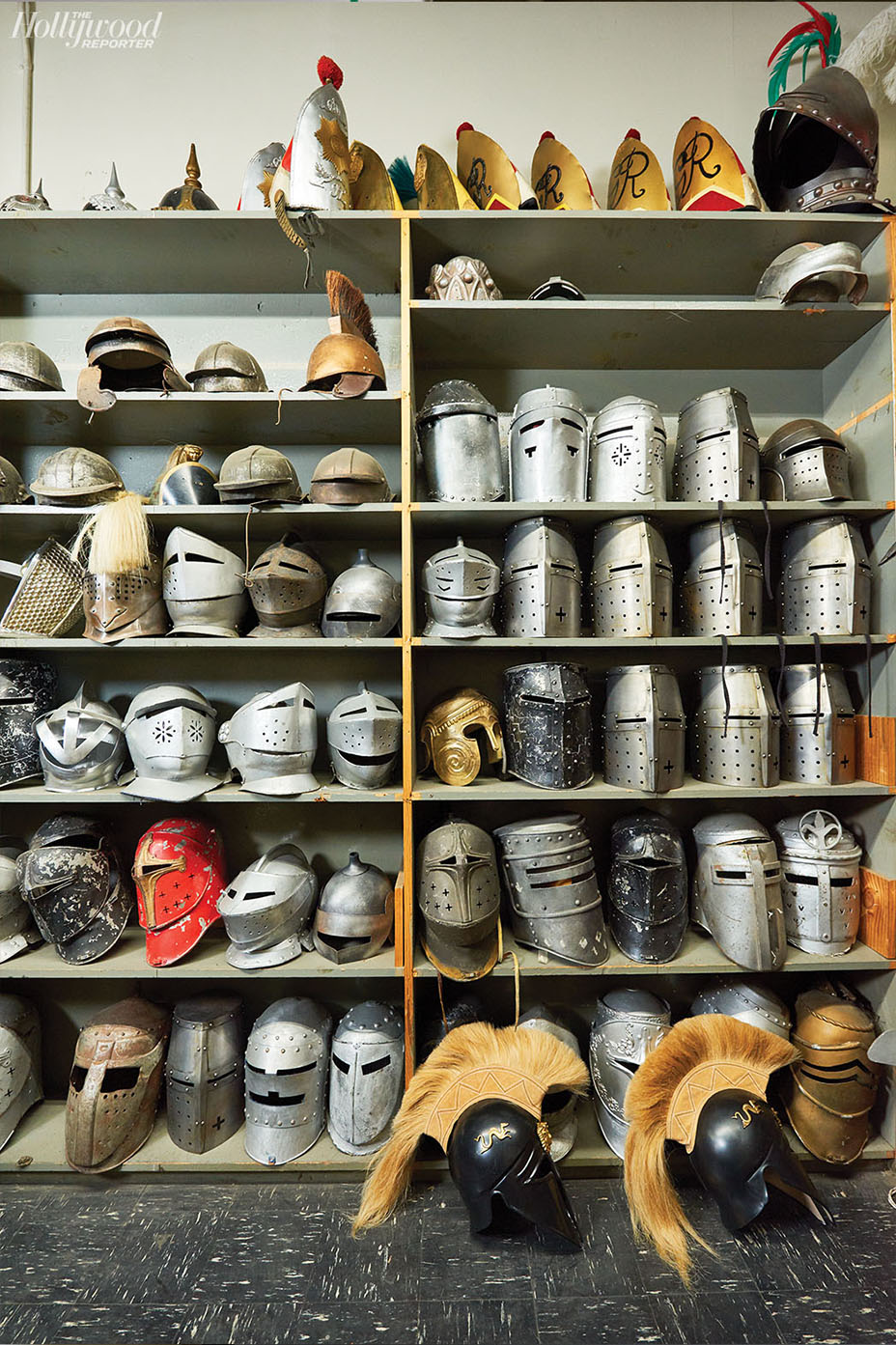 Plotting a coup? Western Costume’s Armor Room can outfit any character preparing for battle throughout the ages, with thousands of helmets, chest plates, chin and wrist guards in Roman, Greek and sci-fi styles. (Swords and shields live in the prop room.) “Sometimes it’s fun to get grungy in the Armor Room, [which is in] the bowels of the building,” says Zophres. 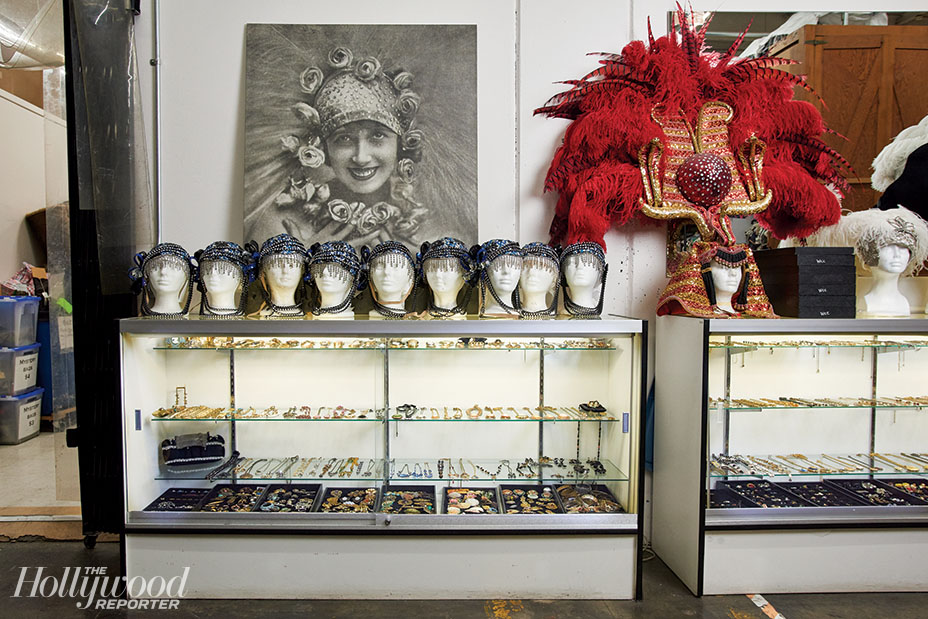 Western’s jewelry selection encompasses every era of bling, including some of the crowns Carter sourced for Black Panther. After perusing Western’s Egyptian-themed jewelry to research details such as gem placement, veteran costume designer Marlene Stewart deployed 3D printing and gold plating to create a custom neck piece for Ben Kingsley to wear as pharaoh Merenkahre in the 2014 Night at the Museum installment. 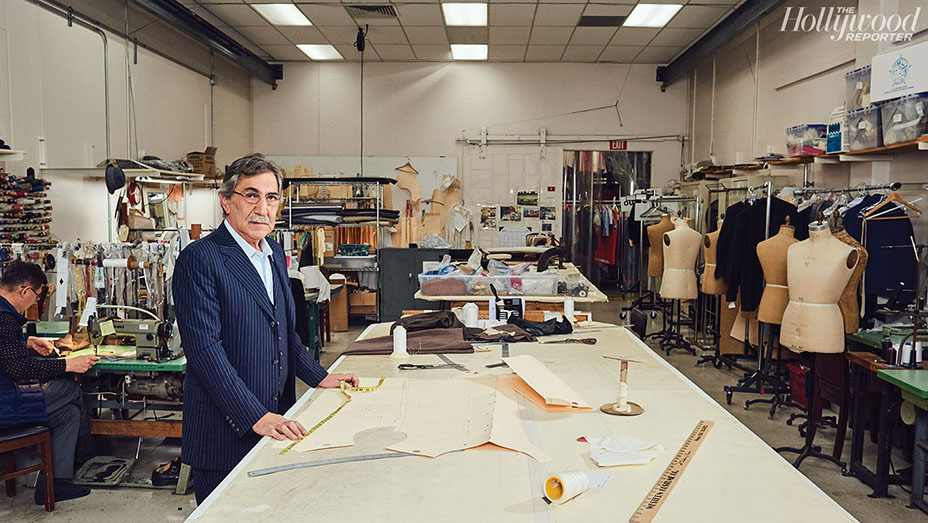 Under the supervision of department head Jack Kasbarian, the men’s tailoring section of Western Costume has stealthily made dapper duds to the tune of 100 to 200 suits per year (in addition to uniforms, frock coats, tailcoats, tuxedos and period costumes) for Hollywood leading men from Harrison Ford to Ryan Gosling. “It takes about 40 hours to make one suit because it’s all hand work, no machines,” Kasbarian says while wearing a suit of his own creation.

“There are not too many shops left that do that,” says Bryant, who enlisted Kasbarian’s team to build the iconic designs for all the Mad Men, including Don Draper. Heimann, who worked with the department on the red-and-black replicas of the Copacabana nightclub jackets and actor Mahershala Ali’s suits for best picture nominee Green Book, commends Kasbarian’s ability to execute drawings and sketches. In fact, Kasbarian’s skill set is so on-point that he’s become Ryan Gosling’s personal suit maker.