[Warning: This story contains major spoilers through the season four finale of The CW’s The 100, “Praimfaya.”]

“It is happening again.”

Those four words were liberally applied in the lead-up to last week’s Twin Peaks revival, but they actually hold new meaning in the very different context of a very different show: The 100, the sci-fi series about disparate groups of men, women and children fighting with each other and against each other to survive in a virtually uninhabitable Earth.

The world of The 100, already fraught with global and personal disaster, became an even harsher realm in this week’s season four finale, “Praimfaya,” thanks to the arrival of the so-called Death Wave, the nuclear disaster making its swift march across the world all year long. The Wave finally arrived in the finale, and the question of how our heroes would survive has finally been answered — and it involves a veritable reboot of the series.

In the finale, Clarke Griffin (Eliza Taylor) and her friends embarked on an improbable mission to blast off into space and return to the Ark, humanity’s longtime home that was abandoned all the way back in season one. The mission was a success, but only after Clarke sacrificed her own place with the team in order to physically operate a satellite on Earth’s surface. The brutal decision meant Clarke was left on Earth without shelter from the nuclear storm. One of the last images we see is the Wave passing through the land, as Clarke stumbles into a facility, covered in irradiated boils…

…and then the series jumps six years and seven days forward in time. Clarke is fine, thanks to becoming a Nightblood earlier in the season, allowing her body to reject radiation. She has a new haircut and a new friend named Maddy, several years her junior. What’s more, with the bunker filled with 1,200 Skaikru and Grounders completely inaccessible thanks to the Wave’s destructive path, and with the rest of her friends hopefully still alive somewhere in the stars, Clarke and Maddy just might be the last two people on Earth.

That is, until a spacecraft belonging to an as-yet-unknown party called the Eligius Corporation descends from the skies, promising all-new characters and conflicts for the season to come. Showrunner Jason Rothenberg spoke with The Hollywood Reporter about how the time jump and the new circumstances on the board serve as something of a reboot for The 100, what to expect from season five, and more.

'The 100' Renewed for Fifth Season at The CW

In the past, season finales of The 100 have often given an indication of where you plan to take the show in the following year. With that said, what did you want to set up with the season four finale’s time jump?

We wanted a reveal that Clarke survived and that her Nightblood kicked in, and she’s now essentially — or so we think for the first couple of minutes of that final pop-out at the end — the lone survivor on the planet. Her friends… we know they made it to space, but she doesn’t know whether or not they made it. We also know there’s a group of 1200 led by Octavia (Marie Avgeropoulos) in the bunker, but Clarke is the lone survivor on the planet. And then we reveal she’s found Maddy, this Nightblood child. Clearly, there’s a maternal connection between the two of them when we reveal her in the end. That’s something that’s very exciting for me to think about, how season five will unfold with that emotional and really powerful story. They have been together for years when we first see them. She’s been with Maddy alone for a number of years; longer than she was ever on the ground with anybody. So it’s going to be a very powerful bond and a huge part of season five.

I’m preemptively shaking my fist at you, because clearly you’re going to kill this character and break all of our hearts.

(Laughs.) Well, you know, we’re not averse to killing children. That sounds terrible. (Laughs.) We’ve done it before! But I’m not saying that’s where this story is going.

Regardless, it was important to me to also bring in the new threat as well. That prison ship that appears at the end clearly is going to be a problem moving forward that we’ll deal with in season five. In some ways, think about it as coming full circle. The kids in the pilot of The 100 were criminals coming to the ground and realizing they weren’t alone. Now, these new theoretically prisoners — if that’s what they are — when they land, will come out and find a world that perhaps they think is not habitated and populated, and will find out that there’s somebody there in Clarke.

The spaceship boats two new names: Eligius Corporation and Gagarin Prison Transport. How much time should fans spend in the off-season reading into concepts like Saint Eligius, patron saint of goldsmiths and coin collectors, and Yuri Gagarin, the first man in outer space?

The fans will definitely read into things, and should. These names are not randomly selected. How about we leave it at that. 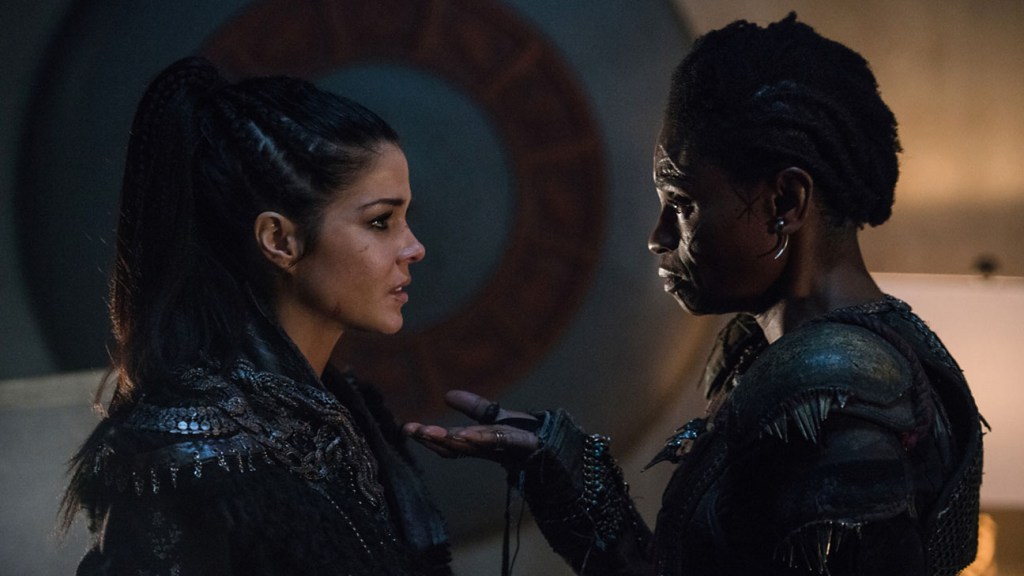 Six years and seven days have passed. Do you have designs on flashbacks to fill in the gaps of what we’ve missed with the characters who have been off-screen for so much time?

We’re in the room breaking season five now. We’re working on episode two already. Yes, flashbacks are definitely part of it. It’s a color in our crayon box that we go to in our show. There’s certainly a lot of intense story to be told about a group of 1200 Grounders and Skaikru living together in that bunker situation. Obviously, as Clarke says in the end of the finale, they tried to dig them out, but there was too much rubble from the destruction of Polis. So they’re stuck under there. It’s six years later, and they’re still not out. That’s going to be a very intense story. I would like to see some of that. You can imagine flashbacks, for sure. Likewise, on the Ring, there’s six years of story that we will have missed. Some of it is probably pretty intense and interesting. We’ll definitely consider seeing some of that in flashback, too. But really, the point of a time jump is to see how things have changed, and to try to fill in the blanks hopefully in a way that makes sense going forward, not going backward.

In sending so many characters back up to space, and you also have this new threat descending from the sky, do you feel that season five is almost a return to the roots of The 100, where that hard sci-fi element is back in place?

Yeah, absolutely. For sure, there’s a big space component. That’s hard sci-fi. It’s a full circle, like I said before, with the prisoners on the ground, only now they are hardened criminals who were sent on this mining mission, perhaps. Now we, Clarke in particular, are the Grounders. It’s a full circle, shoe-is-on-the-other-foot perspective switch. Now our characters who are in space are going to have to figure out how to get down and all of which is great sci-fi.

How much longer do you see The 100‘s story going for? Do you still have years of story to tell, or is season five moving us into endgame territory?

Unfortunately, those decisions are above my pay grade, obviously. I love these characters and I love this world, and certainly this reboot of a [six-]year time jump provides us with a springboard that could go forward for season upon season. There’s no reason why it should have to end. If it does have to end, the finale — which is weird to talk about, the finale of season five! But it’s epic, and it could perhaps serve as [an ending]. I hope it doesn’t. Hopefully they’ll give some indication as we’re working through as to whether or not it is, so I can give the coming finale the weight I think it would deserve if it was a series finale. Unfortunately, as you know, so many of these things are business decisions that are made financially and not creatively.

Are you prepared for it?

Am I prepared for it? I mean, emotionally, I would not be prepared for it! (Laughs) I love this show. I love these characters. I want them all to continue. But I have had the endgame in mind. Every finale could have kind of served as a series finale, if you look back on them. We just keep getting to tell the story. Hopefully we’ll get to tell part six as well. But that’s going to be up to the fans, for sure. That’s up to them, how much they want it, and how badly they want it.

What do you think of the new direction for The 100 as the show moves forward in time? Sound off in the comments below.