For many teenagers, high school is a challenging time, and for some, it is traumatic. It’s why 13 Reasons Why, Jay Asher’s best-selling novel about a 17-year old girl’s suicide, has resonated with millions of young people since its publication over a decade ago. With its unflinching depictions of the hurt teens can go through — anxiety, bullying, assault, depression and suicide — it helped lift the stigmas young people increasingly experience growing up today.

'13 Reasons Why' to Address Suicide Controversy With New Warning Video

So when it came to turning the book into a TV series, our goal was to shed light on these same issues, helping teenagers understand they are not alone and don’t have to suffer in secret. At every step, including for every script of the series, the writers and producers worked with psychiatrists, experts in sexual assault as well as bullying, school counselors and teachers to ensure that even the most challenging scenes were grounded in reality. And just as with the book, we’ve heard from people all around the world that the series gave them the courage to talk about issues they’d struggled to discuss before, including with their own families.

The show’s positive impact has been observed in numerous independent pieces of research. In one study, the vast majority of respondents who’d admitted to bullying before watching season one said that they had changed their behavior afterward. Another study showed that viewing 13 Reasons Why gave college students a better understanding of suicide but did not increase suicidal thoughts or behavior. In 2018, the show won a Mental Health America Media Award for encouraging conversations “between parents, students and mental health advocates on the epidemic of teen suicide, depression and bullying.”

Dr. Rebecca Hedrick has experienced these positive effects firsthand working as a psychiatrist at Cedars-Sinai Medical Center in Los Angeles. She has found that virtually all her patients who watched the series said it not only reflected their experiences at high school, but also helped to start conversations with their parents. In particular, they felt heard and understood in a way that they had not before — sparking hope and leading them to seek help.

Yet doubts about 13 Reasons Why and its impact on teenagers persist, in large part due to concerns about suicide contagion. However, as psychologist Christopher Ferguson showed in a review published last year, the studies to date do not support the theory that fictional media (as opposed to coverage of real-life suicides, especially by celebrities) creates suicide contagion.

Critics have pointed to spikes in crisis call-center activity, internet searches and posts online to argue that the series has driven suicidal behavior. This ignores the way the show actually encouraged people who were struggling to reach out for help. After the launch of season one, Crisis Text Line says that nearly 70 percent of those who contacted them for the first time cited 13 Reasons Why as the impetus to seek help, with 65 percent admitting to sharing something they had never talked about before.

As The Los Angeles Times recently reported, a new study using Centers for Disease Control data claims to show a correlation between 13 Reasons Why and an increase in teen suicide. However, the research failed to substantiate the author’s own hypothesis: that when the show launched on March 31, 2017, young females would be most affected, because it’s a girl whose suicide is depicted onscreen. In fact, there was no increase in suicide rates for adolescent girls that spring — and for boys the increase started before the show even launched. As you can see from the chart below, which is based on the same government data, suicide counts for adolescent girls over the last decade have been much more stable than for boys, which have risen consistently. The highest recorded month for girls was November 2016, well before anyone had ever watched 13 Reasons Why. 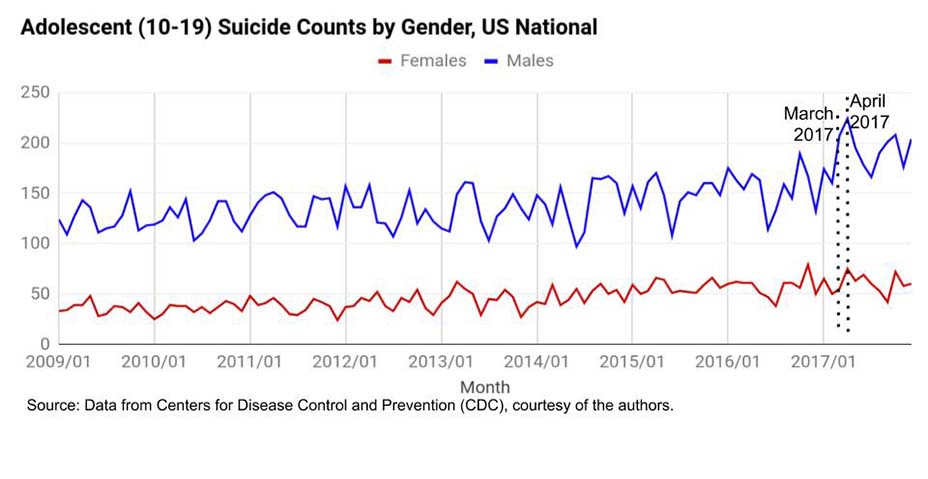 It’s always hard to understand correlation with these types of studies, given that you don’t know who watched the show or heard about it in the news. Experts also agree that many factors contribute to people taking their own lives. As the authors of the recent study themselves explained, this “limits our ability to draw any causal conclusions between the release of 13 Reasons Why and increased suicide rates in young people in the U.S. There may have been other events or unmeasured factors that occurred during the study period that might be associated with increased suicide rates.”

The suicide of Aaron Hernandez in April 2017, for example, was widely covered by the media. And in her 17 years practicing psychiatry, Dr. Hedrick has never observed political debate having such a detrimental impact on her patients’ mental health, especially people of color, as she has today. If you compare the data for 2016 and 2017, suicides went up 48 percent for Hispanic boys — double the rate for white boys. Suicide attempts among white youth declined from 2016 to 2017, while they increased among youth of color.

Depression and suicide have been on the increase for many years, so it’s important we keep the conversation going to avoid the taboos that stigmatize people and prevent them getting help. 13 Reasons Why is not the first show to take on these hard topics, nor is it the first to be graphic in its storytelling. But we believe it was the honest, unflinching way the show looked at bullying, rape and suicide that helped get the world talking — and for the better.

Brian Yorkey is the creator and executive producer of 13 Reasons Why. Dr. Hedrick is an assistant professor in the department of psychiatry at Cedars-Sinai Medical Center and an adviser to the show.

'13 Reasons Why': 9 Burning Questions for Season 3