[This story contains some spoilers from the third season of Netflix’s 13 Reasons Why.]

13 Reasons Why exploded onto the pop culture scene as a teen suicide drama in 2017. Since then, the divisive Netflix young adult breakout has aimed to redefine itself — and the newly released third season takes the biggest swing.

Originally developed as a one-off, the Paramount Television series from showrunner Brian Yorkey was renewed for a surprise second season after a celebrated run. The second season kept Jay Asher’s book material in its rearview mirror as it expanded the story beyond protagonist Hannah Baker (Katherine Langford) and her suicide. The third season (released Friday) forges ahead well beyond the source material that defined the series to tackle a range of hot-button social issues.

13 Reasons Why now binds together the Dylan Minnette-led ensemble’s issue-driven storylines with a whodunit web. The first season, while critically praised out of the gate, also labeled the series as a controversial one for courting backlash over the graphic depiction of Hannah’s suicide (which, more than two years after its debut, was edited out of the series). The second season prompted a similar contagion concern when the 2018 episodes, which launched the same weekend as the Santa Fe High School mass shooting, ended with a thwarted school shooting at the show’s fictional Liberty High.

By pivoting the story to center around a murder mystery, the third season defines itself as being about the murder of series villain Bryce Walker (Justin Prentice). “Who killed Bryce Walker?” is the question that was asked by show marketing and promotion going into launch, and the mystery continues to drive every episode until the answer is revealed in the season finale. After two seasons of controversy, the shift returns the series to being a YA drama — not a teen suicide drama, and not a drama about a high school shooting.

Still, the third season holds onto narrative elements familiar to the series. The narrator is new student Ani (Grace Saif), who comes to town when her mother is employed by Mrs. Walker (Brenda Strong). As viewers get to know her and her burgeoning relationships with both Bryce and Clay Jensen (Minnette), among other core cast, whether or not she is a reliable narrator remains a concern. The season opens eight months after Clay and Tony Padilla (Christian Navarro) led the cover-up of Tyler Downs’ (Devin Druid) attempted school shooting at the Spring Fling dance, but the events unfold in flashbacks. Both seasons one and two played out through timeline jumping, while this season employs a new effect. The present storyline plays out in a widescreen darker color palette, and the past scenes are vibrant and in fullscreen.

Viewers see a complicated exploration of Bryce as the season unfolds. Bryce was revealed to be the high school student who raped Hannah in season one and in season two, with the help of Jessica Davis (Alisha Boe) coming forward during a public trial, the privileged teen was outed as a serial rapist who helped foster a culture of sexual assault and abuse at the athletic department of Liberty High. Though he was convicted, Bryce only received a slap-on-the-wrist punishment when he was sentenced to three months probation in prescient commentary for the #MeToo era.

The third season unveils the dysfunction of Bryce’s upbringing to show how he comes from a line of abusive men and neglected parenting, while also spreading out to show how all of the main characters have been hurt in his wake. In doing so, the series tackles everything from mental health to suicide and depression, violence and bullying, sexuality, drug use, trauma and PTSD, sexual assault, abortion and immigration. 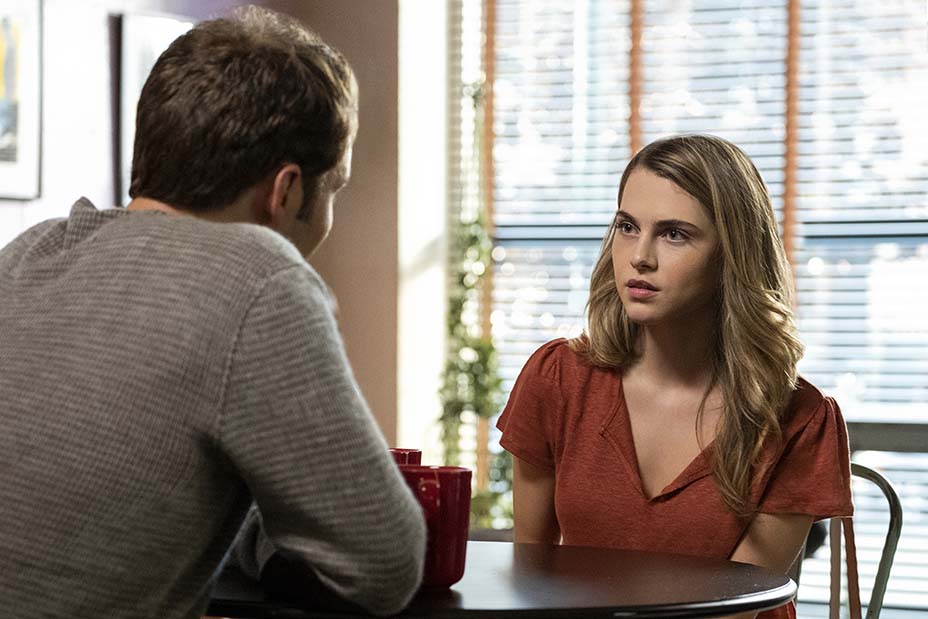 Another cliff-hanger of season two was the reveal that Bryce’s girlfriend Chloe Rice (Anne Winters) was pregnant with his baby. A beginning arc of the second season reveals that Chloe never told Bryce, who now attends a nearby private school, about the pregnancy and decides to get an abortion. But she only made up her mind after heeding Mrs. Walker’s warning that someone like Bryce should never father a child.

Though Chloe lied on the second-season’s witness stand to protect her boyfriend, the third season sees her coming to terms with the fact that she, too, was a victim of Bryce. The second episode spends time with Chloe as she visits more than one clinic and is confronted by a graphic protest threat. The episode sits with her feelings both during the procedure and afterward to deliver an authentic depiction of a woman and a sexual assault survivor making a choice about her body as restrictive abortion laws are being reviewed in courts throughout the country.

Chloe and Jess show two different roads survivors can experience. Chloe eventually leaves school and aims for a fresh start, which effectively wraps her storyline in a short but powerful way; whereas Jess’ storyline is a major one throughout the season.

After exploring Jess as a rape victim in season two, the new episodes track her journey as a survivor in a nuanced and evolved way that, across this many hours of television, is rarely shown. Jess doubles down on her activism when she leads her student body as president and starts a club for fellow sexual assault survivors. She funnels her rage into a pivotal Homecoming Game protest and she rails against administration about her plan to abolish the rape culture that has long been fostered at the school. She confronts her rapist, Bryce. And she explores intimacy with Alex Standall (Miles Heizer) and Justin Foley (Brandon Flynn) as she successfully reclaims her own body and enjoys having consensual sex. 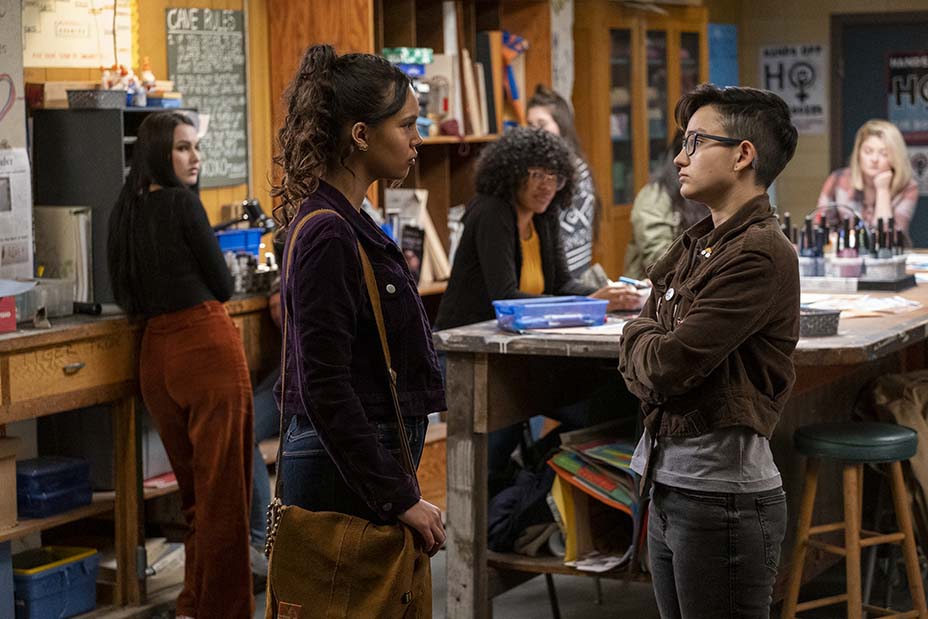 One of the most impactful scenes of the season comes in the penultimate episode when Jess speaks at a school assembly and prompts her fellow students to come out as sexual assault survivors. The many admissions from her peers — both female and male alike, and including more than one main character — put faces to the jarring statistics about sexual assaults. Every 92 seconds an American is sexually assaulted and every nine minutes that victim is a child, according to RAINN (Rape, Abuse & Incest National Network). The season, which opened with a cast PSA, ends each episode with a prompt to the series resource website https://13reasonswhy.info/, where viewers can find crisis hotlines and discussion guides on everything from suicide and depression to sexual assault and healing.

Exploring the complicated past of a convicted rapist has the potential to be controversial. One of Bryce’s most redemptive actions, which opens the door to the season’s even bigger swing, is his desire to help Tyler after he learns of his brutal sexual assault at the hands of friend and closeted gay football star Montgomery de la Cruz (Timothy Granaderos). Going into the third season, none of the characters knows what drove Tyler to want to attack his schoolmates at the Spring Fling dance. Tyler suffers from depression and bullying and considers ending his life, but his ability to ultimately speak his truth frees him from the darkness. The new episodes gradually explore Tyler’s specific journey as a survivor in powerful contrast to Hannah’s tragic ending, but the arc of the potential school shooter is sure to prompt debate.

Another area where the season leans into a hot-button issue is with the immigration storyline surrounding Tony. The new season continues to cast mystery around the oft-mysterious character, but everything shifts into focus once it’s revealed that the Walker family, acting on information dug up for the trial, prompted the deportation of Tony’s family.

Unbeknown to Tony, who was bringing his boyfriend over for dinner to meet his parents, the Walkers had reported the Padillas to ICE (Immigration and Customs Enforcement). The heartbreaking sixth episode again spends time to detail the realities of the current crisis, showing how someone can have their family ripped away from them in an instant. When Tony arrives at his parents’ house, the stove is still hot and the dinner table is set. It takes days before Tony receives a call from his father, who had been sent to a different immigration detention center than the rest of the family. Though Tony rounds up enough money for a lawyer, his family is promptly sent back to Mexico. Tony, unable to be a caretaker for his youngest sister, sends her to live with family states away.

“I dedicate my performance this season to the thousands of young people in this country and others, who are separated from their families and feel hopeless. No human is illegal,” Navarro wrote on Twitter over the weekend. 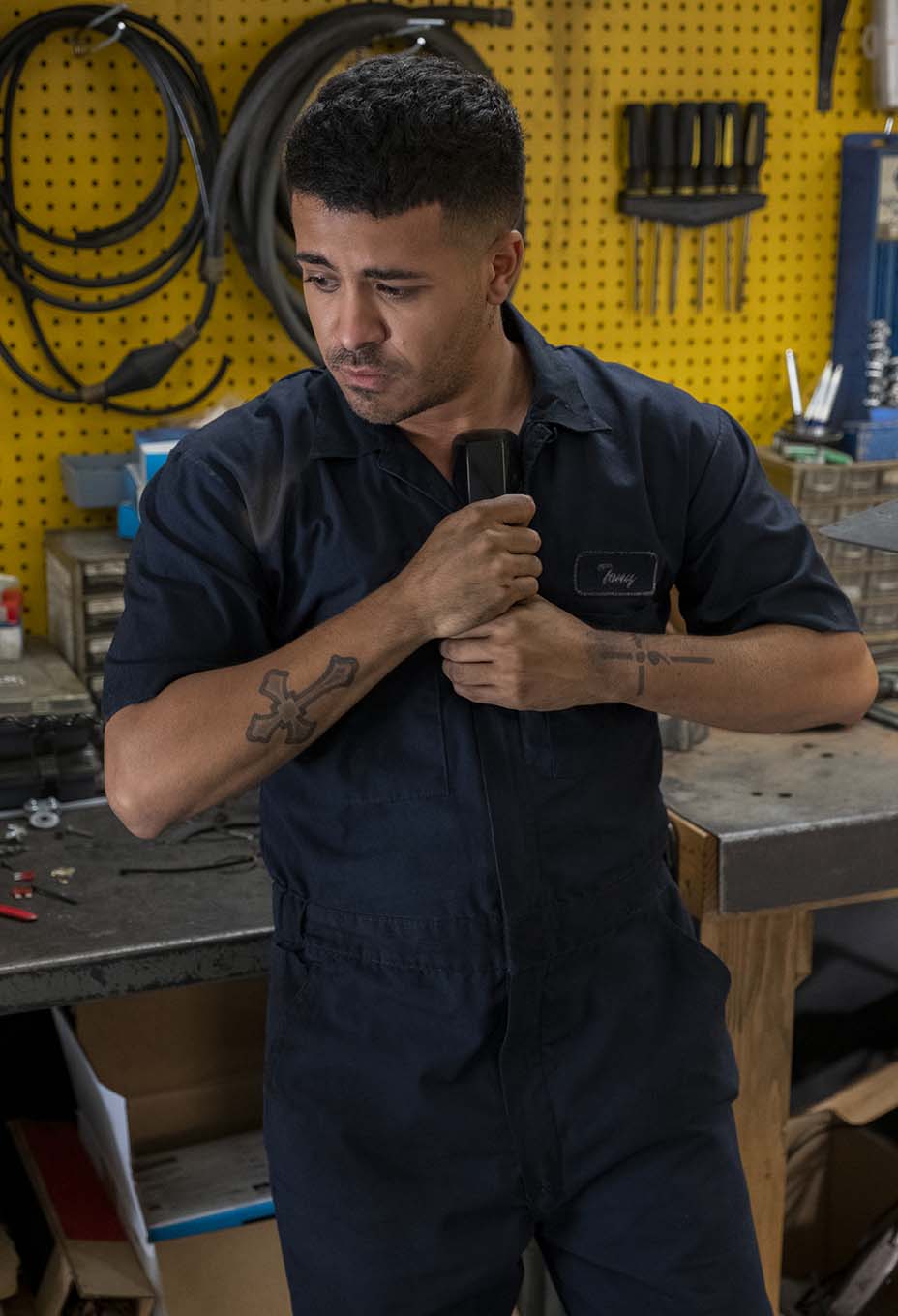 Though the season wraps the Padilla family’s story on a warmer note when they reunite over FaceTime on Thanksgiving, the third season’s whodunit ending (head here to read about the ending) propels the series into its fourth and final season. Netflix handed out the early renewal earlier this month and Yorkey and his team of writers are already at work on wrapping up the series. The final season, which does not yet have a return date or episode count, will pick up shortly after the events of season three and is set to feature the core cast’s graduation from high school. The resolution of the death mystery plot provides enough collective ramifications to explore in the show’s final run, as the series seems poised to once again shift into becoming a true ensemble story.

The third season of 13 Reasons Why is streaming on Netflix.