[This story contains spoilers from the 24: Legacy season finale on Fox.]

The silent clock. It’s a ritual with roots as deep as the first season of Fox’s 24, in which Jack Bauer’s (Kiefer Sutherland) wife Teri (Leslie Hope) is played off the stage with a soundless ticking clock. Since then, whenever a beloved character meets their maker, 24 honors their passing with the silent clock — an honor that now extends into 24: Legacy territory.

On Monday’s season finale of Fox’s new incarnation of 24, former CTU director Rebecca Ingram (Miranda Otto) survived one incredibly deadly situation, only to die in another. Earlier in the episode, Rebecca is nearly executed during a public broadcast, but survives long enough to become a bargaining chip in a hostage negotiation. The deal goes bad, and Rebecca throws herself in front of a bullet in order to save Eric Carter (Corey Hawkins). The two share a touching final moment in an ambulance, and shortly after she arrives at the hospital, Rebecca succumbs to her wounds. Naturally, the silent clock is there to mark the occasion.

For more on the finale and the tragic death scene, Otto spoke with The Hollywood Reporter about her experience working on 24: Legacy, what it was like to keep her character’s fate a secret, her thoughts on Rebecca’s ending and why she’s thrilled to have no idea what’s coming next.

Was this a difficult secret to sit on, the impending demise of Rebecca Ingram?

It was difficult to keep these things a secret. I’m in Australia now, and the show is also on the air here, but particularly in America, people were asking me all the time if the show was coming back, and what’s happening next season; asking me all kinds of questions. I would have to be so cagey in what I’d say to people, trying not to let on what’s going to happen in the story. That’s one of the fun things about the show: They really do shock you sometimes with what they’re going to do. The whole point of killing a character like mine is you don’t expect it’s going to happen. You don’t want to spoil that for people. It’s really hard, with friends and family, talking about what you’re doing and when’s the show going to start up again. (Laughs.) I had to be very careful.

How did you learn about Rebecca’s death?

There were a few hints along the way toward the end. We saw more of her story being told. [Executive producers Manny Coto and Evan Katz] rang me up and told me before we received the final script. They like to keep things close to their chest. I think they don’t fully make their decisions until they’re absolutely committed to shooting it. They like to be able to change things until the last [moment]. So they didn’t really tell me until right before the end.

What was your reaction to the way Rebecca’s story ends?

I thought it was interesting, that there was a moral conflict in what she had done. I thought that was a very interesting way to go in the show, that she was in a position along the way where she made decisions that perhaps she regretted, and that she became so involved in what she was doing, that she chose to move things in certain ways that had become not the right way to do things. I thought it was interesting that it wasn’t a cut-and-dried thing within this world. What’s the right thing to do? Do the ends justify the means? Over time, she had made decisions that were questionable. It made everything more complicated, which made it more interesting, rather than just being heroic.

Some of Rebecca’s final words come in the ambulance ride with Eric, when she talks about how everyone has the capacity for darkness, and how for the people in their line of work, it’s both a gift and a curse. “It can eat you alive if you don’t deal with it,” she says. In your interpretation, where was Rebecca with that equation in that moment? Had she reached some form of peace with her own dark actions?

I think at that point, she doesn’t know she’s going to die. What’s happened is she and Carter have, through forced circumstance, become even closer. She’s able to articulate in that moment that there are sometimes things where you have this incredible forced intimacy because of what’s happened in your life, that you haven’t been able to tell anybody, or haven’t even been able to understand yourself. In that moment, I don’t think she thinks she’s going to die. I think she thinks it’s going to be OK. It’s a shock for everybody when she does actually die. So, at peace with it? I don’t know if that’s the right explanation.

It’s more acceptance. It’s an understanding of herself and who she is, and that it probably wouldn’t have played out any differently any other way. It’s not that you regret things you’ve done, but you understand the fate of your circumstance, knowing the character of who you are, and ultimately, this is where things were going to go. Because of who you are, you wouldn’t have made different decisions. It’s not like there’s this alternative life where you made different decisions. The character of who you are always would have pulled you in this direction. This was always your fate in some way. It’s a fatalistic thing. That’s what she’s saying to him in some way. You’re going to have to accept who you are. Whether you’re here tomorrow or it’s going to take another 10 years, you’ll end up in this line of work, because that’s who you are. You’re going to be driven into doing this. 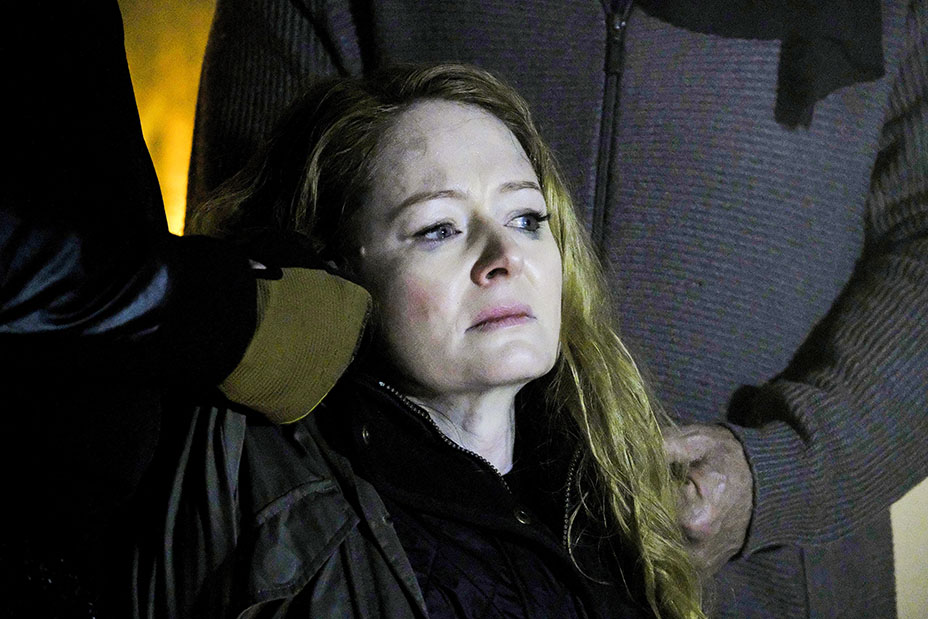 What do you remember about shooting Rebecca’s death scene in the hospital?

We had some people who were real nurses and could explain things to us. In the ambulance, we had people there who had been in these situations where people have been shot or stabbed or in this kind of critical situation. They could give us advice on how things should be. We were a tight-knit group, so it was sad to shoot that scene. We were shooting until two or three in the morning, maybe even later, and it was sad … with [Jimmy Smits, who plays Rebecca’s fiancé and presidential candidate John Donovan] and Corey at the end of the day, and thinking that this is the end of these people’s story together. It was confronting. There was a whole technical side of it, and [director Stephen Hopkins] was shooting it and he’s so great. We sorted it all out and did a lot of rehearsal, and then we just did it and let it be messy, an almost improvisational quality to it. At the end of the day, it was sad.

What was the final scene of the series that you shot?

I think it’s when I got shot. That was my final night, me trying to stop Corey from getting shot, and then me getting shot, and all of the pieces of that. We were trying to get the shooting right, working out how the bullet would hit you. We were working backwards in some ways, since we already shot the scenes in the hospital. It was really nice that it ended up being a scene where Corey was there, because we started this whole thing together. He’s a really fantastic person to work with. He was such a great team leader for all of us actors. I was glad we ended up on that last night together.

Earlier in the episode, Rebecca is in great danger, as the terrorists broadcasted what was supposed to be her execution. Was that an intense scene to work on?

Yes, it was. And it took us a long time to get that. It was difficult to get that right, to get the whole look of it and the story of what’s actually happening there. It took us a long time before we actually got started, before we got it to feel right in that scene. I found it quite emotional on some level, that I was going to be executed. The connotation of what that means in the world today. On some level, it was very dark to shoot that stuff. But on another level, we tried to have some fun. We would say, “Oh, let’s order a pizza tonight.” (Laughs.) We were trying to lighten the situation when we weren’t shooting, because when we were shooting, it was so dark and heavy, the whole storyline at that stage. The idea of what Rebecca had done in the past, that she could be executed by these people … it was a very dark scenario in the end.

It doesn’t work out for Rebecca, but let’s consider the alternate timeline where she survives the finale. What would you have wanted to see happen next with the character?

How about for you? What’s next, now that you’re moving away from 24?

I’m not sure what I’m doing next. There are a couple of things I’ve been talking about with people, but I don’t know. I never know what I’m actually looking for until I find it, the right thing to do. I imagine it will be quite different. Having done two shows in the intelligence world [between 24: Legacy and Homeland], I imagine I’ll choose something very different next time. I’m not sure what that is yet. I had a moment when I was finishing up on the show when I just wanted to start the next thing. Now I’m having a moment of wanting to take a breath. It’s been pretty busy over the last few years. I want to really think about who I want to inhabit next and what kind of world I want to put myself into.

Maybe a comedy. You’ve earned it.

Yeah, maybe a comedy. (Laughs.) Moving onto some lighter world.

'24: Legacy': Carlos Bernard Reflects on 16 Years With the Real-Time Thriller

What are your thoughts on how Rebecca’s story ended? Let us know in the comments below, and check out THR.com/24Legacy for more news and interviews.

'24: Legacy': Carlos Bernard Reflects on 16 Years With the Real-Time Thriller