[This story contains spoilers for the third-season premiere of 911 on Fox.]

Buck (Oliver Stark), still off duty while recovering from injuries he suffered in the season two finale, is (mostly) enjoying a day with Eddie’s (Ryan Guzman) son, Christopher (Gavin McHugh), on the Santa Monica Pier. Just as the episode ends, they notice a huge wave gathering offshore. As Fox has teased in promos for the series, a tsunami is about to hit the coast.

“The earthquake stuff was super successful for us creatively, and I think for the network and the audience. So we were casting around for ideas, like, what can we do that’s not the earthquake but that is a great event? Because I have become the Irwin Allen of network television,” showrunner Tim Minear told The Hollywood Reporter, referring to the producer of 1970s disaster movies like The Poseidon Adventure and The Towering Inferno.

The giant wave is a digital effect, but 911‘s cast and crew also spent weeks in Mexico, building sets to replicate the pier and other parts of Santa Monica and filming in the massive water tanks James Cameron used in the filming of Titanic.

The next two episodes of the series will focus on the tsunami and the rescue efforts. Minear spoke with THR about the decision to film in Mexico, the upside of practical effects and how the show will deal with the aftermath of the disaster. Photos from the production in Mexico are also below.

Was the tsunami that’s going to hit Santa Monica an effort to top the earthquake story?

One of the feelings was, “Well, what’s a place where we can have a lot of different characters interacting and all end up in different emergencies because of this disaster?” And the Santa Monica Pier just seemed like the right idea. Actually, before we even got to the idea of a tsunami, we had talked about wildfires or a fire moving close to the Hollywood sign, and what would wildfires in the middle of Hollywood look like? And actually what it looked like was fires, and that’s hard. And then somebody in the room said, “Let’s have a tsunami.”

The first question was: Is it even plausible that a tsunami would hit southern California and, in fact, it is plausible. And there is a whole early warning detection and there have been tsunamis that have hit the West Coast throughout the last hundred years — not huge ones but significant.

And so [then] the real question was, can we even produce this? Because what I didn’t want to do was go to somebody’s swimming pool and pretend like there were some flooded streets. We needed to top the scale of what we had done the year before on the earthquake. 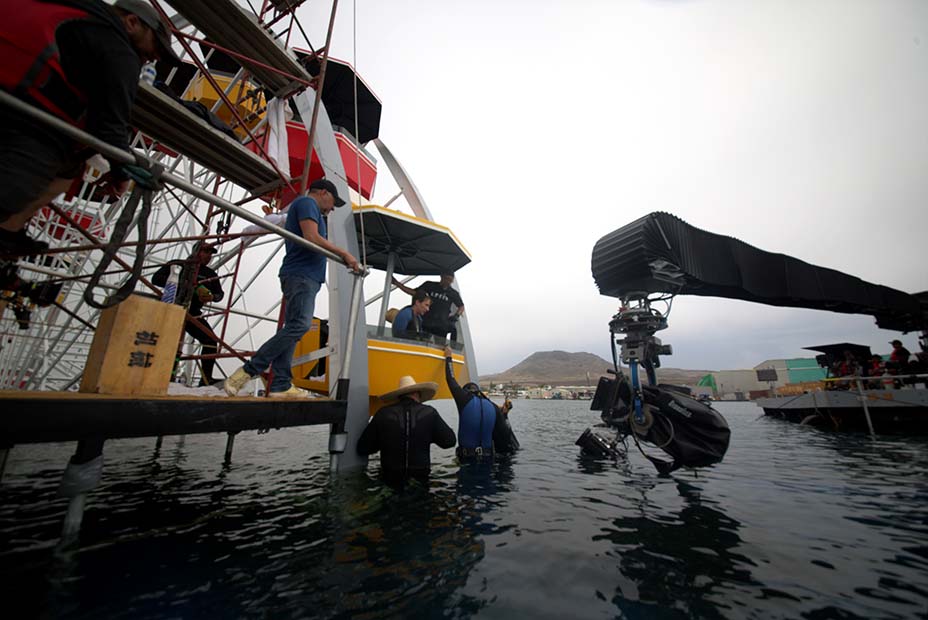 Filming in the Titanic water tanks in Mexico, were you able to build things to scale?

These tanks are huge. We built city streets in these tanks. And when you look at some aerial shots from the drones, you see in one corner of these enormous tanks are city streets, and then a lot of water, like a mile of it, and then there is a Ferris wheel sticking out of the ocean. Those are the tanks that we used.

It’s to scale in a sense. In other words, we built the top parts of streets so that when you flood it with 42 inches of water, and you have your actors being pulled down 42 inches of raging rapids, it looks like it’s seven feet or 10 feet or whatever of flooded street because we built the tops of the streets. But they are interacting with reality.

This does not sound inexpensive.

Are you going to have to do a bottle episode or something like that later in the season?

The trick with this show is to try to spread the wealth in a way that you keep the quality high and you can tell stories that are the brand of the show. Remarkably, we’re not actually over budget yet.

But there will be smaller-scale episodes. There is an episode coming up that was probably one of the most inexpensive episodes that we’ve ever shot, but we didn’t produce it for that reason. It’s an intimate story about Athena’s [Angela Bassett] beginnings with period ’90s story happening along with present-day story with Athena, and it’s a much more focused, smaller-scale episode in that way. But look, I’m just a smart producer. 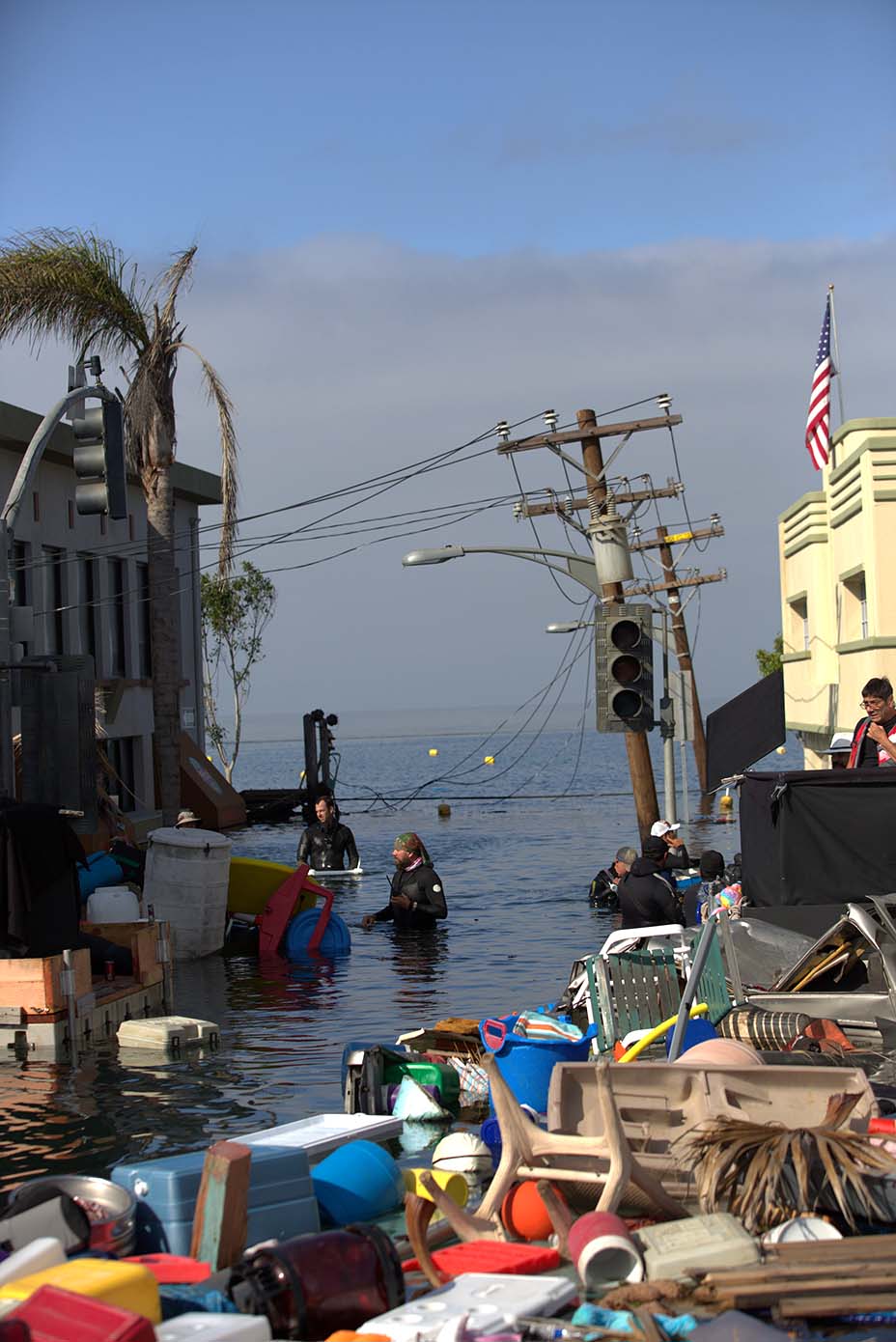 What are the upsides of doing big, practical effects like this as opposed to doing more with green screens and CGI?

I don’t think you can beat doing things practically if you can. I mean, it’s the actors literally scaling this Ferris wheel, it’s Oliver Stark in some raging rapids going down a city street, climbing onto a submerged fire truck. You’re just in there. It’s real. I think it aids the performance, I think it aids just the visceral feeling as you’re watching it. And I think it was super exciting for the cast and the crew to pull off something like this.

This was a very ambitious thing that we did, and we did it in such an enormously quick turnaround. In a feature film, it would take you months and months to prep something like this, and we’re doing it really in a matter of weeks. We talked about it a couple of months before we started it and Giles Masters, our production designer, was extremely excited to do this. So he just came in prepared. He came in with ideas.

Every time I thought I was asking for too much, [line producer] Bob Williams or Giles Masters would come to me and say, “But can the Ferris wheel collapse into the ocean?” And I’m like, can we do that? So they were actually giving me more than I even dreamed asking for.

Did you all learn any lessons from the large-scale effects you did last season that you could apply here?

I’ll tell you what I think it did. Because even the earthquake last year seemed like too much for a network TV show.  … When I ask can we tilt the W Hotel, can we rebuild the hotel on the stage and actually have it be canted at a 30-degree angle, can we do this? Can we put a hotel suite on a gimbal? Can we have a piece of a freeway collapse? Can we do these things on our show and not have it seem like an episode of TV where somebody is shaking the camera and dropping some foam bricks in front of the lens?

I really wanted it to feel like some scale to this thing. And we ended up pulling off something that was so good that it wasn’t even planned to be two episodes. I was getting the material back, I was seeing dailies, I was seeing some sequences cut together, which then inspired me to cannibalize from the earthquake episode and then write another — plus it was coming in long and I didn’t want to throw any of it out, so I sort of cannibalized some of that and then wrote a part two to go with part one. 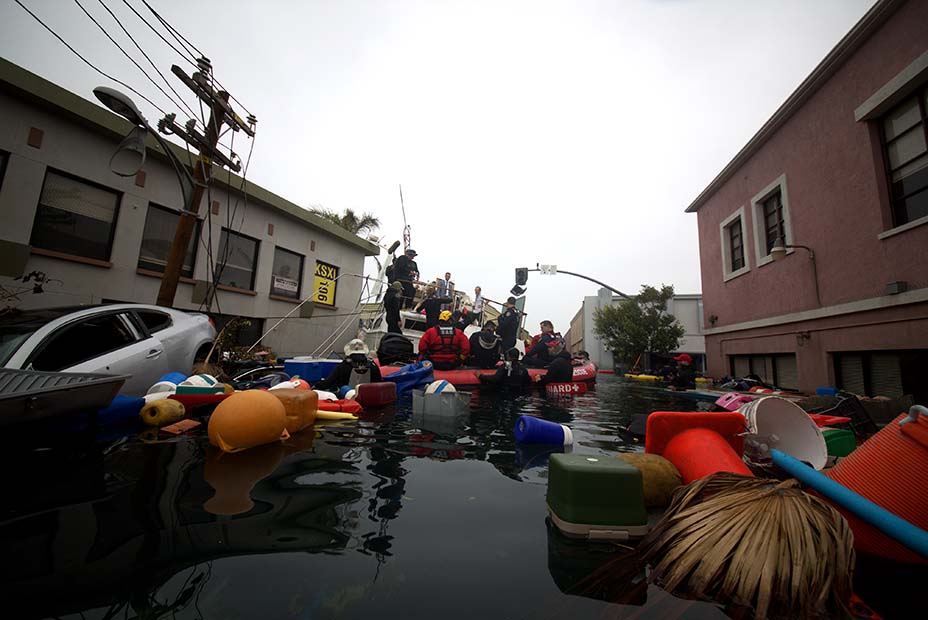 And they were two very different episodes, right? The first one was extremely disaster movie and then once everybody was trapped in different places and we came into the second part, it felt different. They were smaller, more contained, more claustrophobic and more emotional stories in the second part.

The tsunami has worked out the same way where it’s big in scope, it’s big in disaster-movie thrills in the first part, and then in the second part, once that water recedes, people are separated, you don’t know who lived and who died, people are desperately searching through the rubble to find their loved ones and to survive that night when suddenly you’re standing in water that could go up in flames at any moment.

Following the earthquake arc last season, it seemed like that story very much faded into the background aside from the occasional reference. How do you treat a huge event like this that will obviously still have aftereffects for a long time?

You don’t want to forget about it, but let me ask you this, how often do you think about the 7.9 earthquake that happened on the Fourth of July?  Now thank God, for those of us living in Los Angeles, it didn’t really hit Los Angeles. But it did some substantial damage out in the desert areas. But that was a 7.9. And I think, look, it’s a TV show and we don’t want the rest of the season to be about what it’s like to clean up post-tsunami debris, but we’re not going to forget it.

I think what you’ll find, like in episode five, I think, there’s some collateral damage that happens during a rescue that is a result of what had happened in the tsunami. So I think that’s how we approach it.