Skip to main content
February 28, 2019 7:00pm
Logo text
[This story contains spoilers from the season one finale of ABC’s A Million Little Things.]
The season premiere of ABC’s A Million Little Things established an emotional puzzle-box mystery in its opening moments, as Jon (Ron Livingston), a successful and beloved real estate titan, abruptly committed suicide, leaving his close-knit circle of friends shattered. In its 16 episodes to date, the drama has gradually unravelled clues as to what may have driven Jon to take his life, while also taking pains to emphasize that suicide rarely has a single cause.
Still, Thursday’s season finale delivered the closest thing to a definitive answer, revealing a trauma that Jon kept hidden from everyone in his life. On Sept. 11, 2001, Jon was booked on Flight 11 out of Boston, one of the planes that was hijacked during the 9/11 terrorist attacks. While he missed the flight by seconds, his then-best friend Dave did not, leaving Jon with a case of survivor’s guilt from which he never fully recovered. The long-mysterious Barbara Morgan (Drea de Matteo) was not only a friend of Jon’s, but Dave’s girlfriend, and the two lost contact in the painful aftermath of what happened. Since Jon had not yet met his wife Delilah (Stephanie Szostak) or any of the show’s central ensemble, he was able to keep the painful secret hidden for the rest of his life. “I think ever since what happened, Jon felt like he had to justify still being alive,” showrunner DJ Nash tells The Hollywood Reporter.
Below, Nash discusses how the Flight 11 storyline developed, why Maggie (Allison Miller) was never in real danger despite her grim cancer prognosis and his plans for season two.

'The Good Doctor,' 'A Million Little Things' Renewed at ABC

Was Flight 11 always planned as the final piece of the puzzle in Jon’s story?
It was. It’s something I played around with as a reveal for the end of the pilot. It was too big to be in the pilot because it would have just changed everything. My original thought was that all of these guys were supposed to be on that plane and missed it. I realized that would inform everything, and that it would have come up at the eulogy, so it would have been too much. But I held onto it, and on the first day the writers got together, someone asked me, “What do you think broke Jon?” I was always very careful — and have become more careful since talking to our consultants — about the fact that it’s not just one thing. There are some famous stories of people who missed that flight and went on to not have that affect the rest of their life negatively, but Jon was predisposed in some ways. I pitched the idea on that first day with the writers, and for the whole season we’ve been driving toward that.
Was there anything else you changed from your original idea?
We also had Jon and Delilah meeting on Sept. 11, just after he missed the flight. But it didn’t ring true for us, because we felt like that would be so much a part of their story that we would have heard about it. Even though these are fictional characters who are going through depression, suicidal thoughts, cancer — or in this case, grieving for 9/11 — there are real people who have gone through the same thing. We wanted to make sure that we were being authentic and sensitive to that. Having Jon and Delilah’s meeting be on a different day seemed more sensitive to the community that lost people on that day.
So what broke Jon? If you’re looking at it in terms of there being an answer, is it survivor’s guilt?
Yes. One thing I’ve loved doing this season is giving two different people a similar struggle. Survivor’s guilt is what Jon is dealing with, and you have Rome whose life was spared because of that phone call about Jon in the pilot, so he also has it. Now that Linda has died from cancer, both Gary and Maggie are dealing with a little of it themselves, so survivor’s guilt on different levels is something that all of them are struggling with. As we go into season two, that theme will still be present. I talked a lot about this with our consultant, Dr. Barbara Van Dahlen, and I asked her if Jon’s behavior is consistent with someone who has survivor’s guilt — the fact that he never mentioned it to his family, his wife, his friends. And she said it’s exactly consistent, it’s like a hot stove and you can’t touch it any more. He may have tried to visit with Barbara a few times, but the pain was too much and he couldn’t keep those promises. 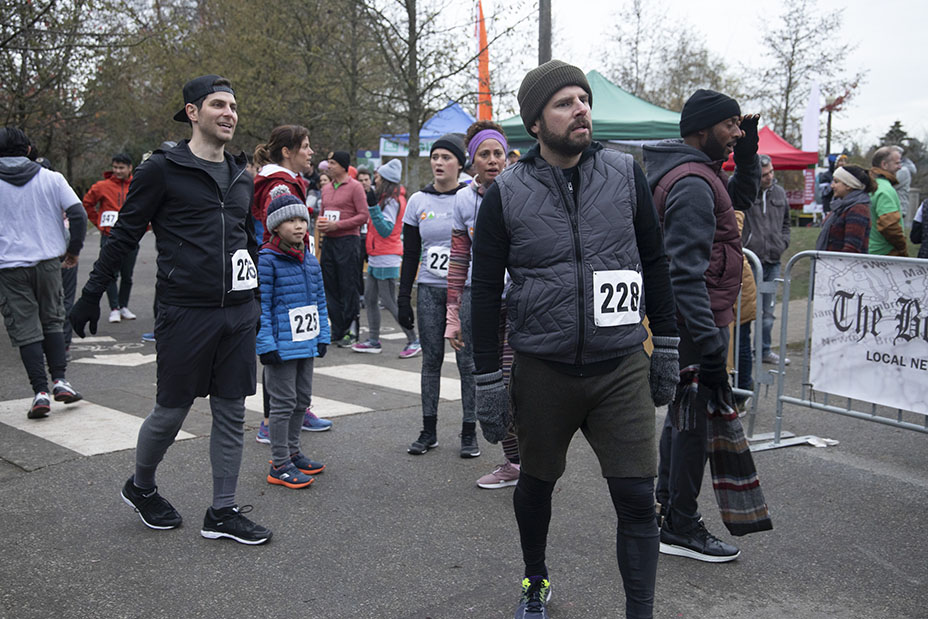 What kinds of conversations did you have about evoking a real event, particularly one as sensitive as 9/11?
Give An Hour, Barbara’s charity, came out of 9/11. She wanted to be there for first responders. When the characters did their race in episode 11, and we did our real race in L.A. to raise money, I asked ABC to let us make it a real charity [in the show], and make it a race for Give An Hour. At first they said no because you can’t give away things for free, and I get that, but then I went back to them and said, “Given where we’re going at the end of the season, I really think we should do this.” They changed their mind. Same thing with the card at the end of the episode. As a guy from Boston who lived in New York, I don’t walk through airport security at Logan [Airport] without being reminded of it; it’s just ever-present. There was a lot of discussion about how do we do this and be sensitive to the community. We didn’t want to hit the 9/11 topic too hard — you don’t see the footage or don’t hear the audio; we just see Jon’s reaction. It was the day we lost our innocence, and I think there’s something also thematic about that within our show, which is the season started with the day the group lost their innocence, and to evoke that at the end of the season was really powerful for us and hopefully for the viewer.
A lot of the season has been about dismantling the mythology of Jon. The finale suggests that his devotion to his friends was a reaction to not being able to save Dave.
He felt like, “If i can just justify me surviving.” At one point in the original finale script, we were going to pop to clips of all these things Jon did for his friends — Jon with Gary in the chemo lab, Eddie saying Jon was the one who got him to quit drinking, Regina saying Jon’s the one who got her out of this restaurant lease — and we didn’t need it, but that’s very much the takeaway. Ever since what happened, Jon felt like he had to justify still being alive.
Maggie’s prognosis has been bleak through most of the season, but she goes into remission in the finale. Did you ever consider having her not make it?
Absolutely not. Alison and James are so good together. As a showrunner trying to make 22 episodes next season … you don’t pull a player from a game when you need to get points on the board! But it was amazing to me from talking to people during the season how many really thought she was going to die. It speaks to how unfair cancer is. You can say you don’t want someone to die from cancer, but we don’t always have that choice, and it’s why we had Linda die this year. I told the network that we have Maggie, Gary and Linda who have cancer — one of them has to die. And they agreed. But in terms of Maggie’s story and the arc, we knew from the beginning that [she would be OK]. I’ve lost three people who are really close to me to cancer, and if I could change the ending of those stories, I would in a second. This is the one I had the control over, and what’s most exciting about writing this show is I can take stories that I have such personal emotional investment in, and write the endings I wish had happened. You can see that with the Eddie and Katherine storyline, as a kid of divorce myself. 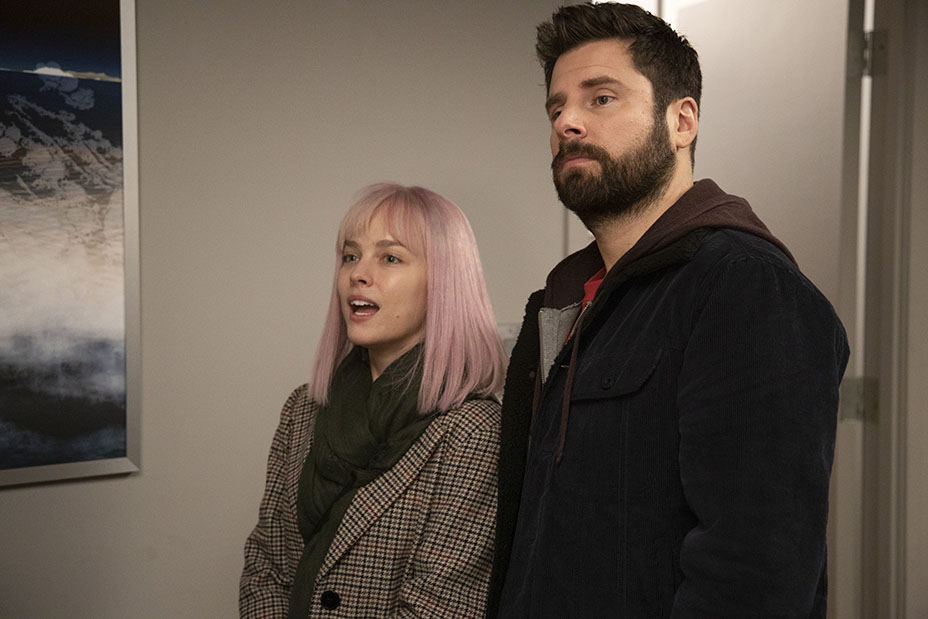 Viewers have been rooting for them to get back together but the last scene of the finale — when Eddie tells her he is the father of Delilah’s baby — throws their future into doubt again.
He was all but home and the thing he did was be honest with her. He could have kept this secret, he could have not been true, and the fact that the baby is his and not Jon’s is not new information, it’s just a new thing to her. The only reason it’s coming out is that he’s being honest with her. We, by design, have put her in an impossible situation of wondering if she is going to push him away for being honest.
The finale also reveals that PJ (Chandler Riggs of The Walking Dead) — the teenager who connected with Rome’s screenplay — is Barbara’s son. How much will that play into next season?
I’d love it to be a big part of the season. Barbara asked Mitch, her boyfriend at the time, fiancee, to lie to their son. Instead of saying that Mitch adopted him, the pain of losing Dave for Barbara was so much that she doesn’t want her son to grow up under the cloud of that, so she has rewritten that story. And for Mitch, if the first move with your son is to lie to him, that’s really hard. Initially in the episode when you see Mitch be either aggressive or potentially violent, you wonder what’s that story, but really it’s a dad who is heartbroken at the idea that this secret he’s kept may get out. What we will see over the course of season two is that relationship, and how do you deal with the discovery that the person you thought was your dad may not be your dad — which obviously juxtaposes with the secret that Eddie and Delilah are keeping.
What kinds of reactions have you encountered from viewers?
The support has been phenomenal, and the response from our fans who have, I guess, felt like the things that they’re struggling with have been, they’re feeling noticed and not invisible. It’s been really rewarding. We took a couple big swings this year, and thanks to the studio and networks’s support we were able to fully swing. For instance, the episode with Regina and what had happened to her [being sexually abused by her uncle] really resonated with people. As recently as yesterday, I had this incredible conversation with someone who said the same thing had happened with her uncle, and it was just beautiful, it was exactly why you create something. You hope it resonates with people, and it seems to be, so that’s wonderful.
This interview has been condensed and edited for clarity.