After 33 combined seasons of The Bachelor and The Bachelorette, ABC has cast its first black lead, a source close to the situation tells The Hollywood Reporter.

Rachel Lindsay, a Texas attorney and current contestant on Nick Viall’s The Bachelor, will be announced as the next Bachelorette on Monday’s Jimmy Kimmel Live! The star of the next cycle is usually announced after the current season wraps, but ABC is breaking tradition by revealing the news weeks before the finale.

The network declined to comment. News of Lindsay’s casting was first reported by the Reality Steve website.

Lindsay is becoming the Bachelorette after years of controversy surrounding the long-running reality dating franchise. ABC executives have come under fire over the series’ lack of diversity, as the starring roles have almost exclusively gone to white leads on both The Bachelor and The Bachelorette.

ABC Entertainment Group president Channing Dungey, the first African-American woman to run a broadcast entertainment division, told reporters at the 2016 Television Critics Association’s summer press tour that the issue lies with booking more diverse candidates from the start of the show, since the Bachelor or Bachelorette is usually a popular contestant picked from the previous cycle.

“It’s worked very well for us because the audiences feel really engaged [in choosing] that candidate,” she said of the process. “What we’d like to do is broaden that. We need to increase the pool of diverse candidates in the beginning. That is something we really want to put some effort and energy toward.”

Viall also became the first Bachelor or Bachelorette in 15 years to give the coveted “first impression” rose — usually a precursor to either winning or becoming a finalist — to a black contestant when he handed Lindsay the night-one trophy.

On the current season, which airs its next episode ahead of Jimmy Kimmel Live! on Monday at 8 p.m. ET/PT, Lindsay is still in the running. Her appointment not only breaks race barriers for the franchise, but it is also the first time ABC has announced its next star while she or he is appearing on the current cycle, essentially spoiling part of the ending as to whom Viall ultimately picks. 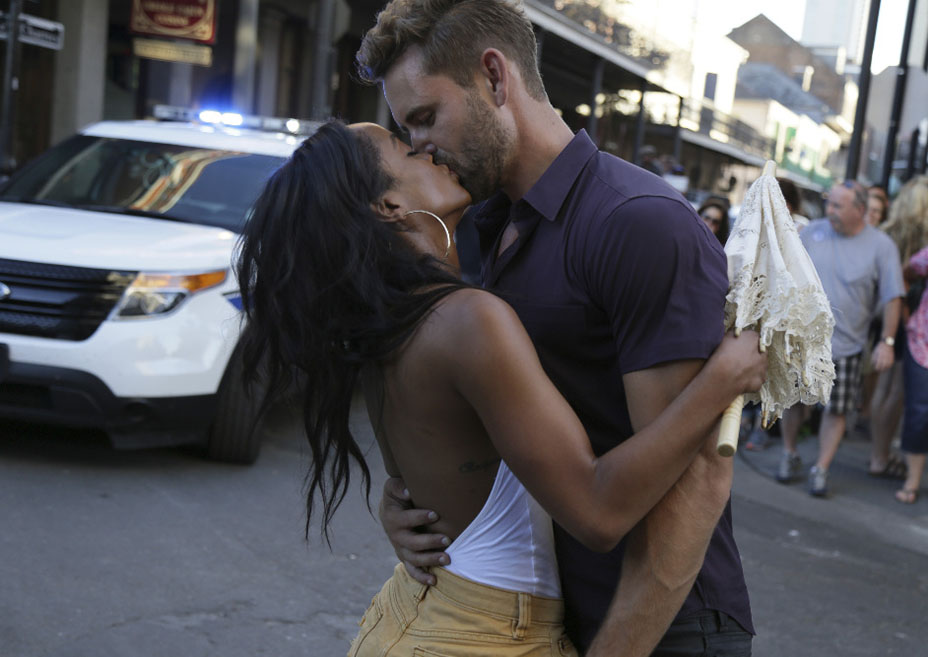 The network similarly announced Viall as the Bachelor while he was still appearing on the franchise. However, he was starring on the summer spinoff, Bachelor in Paradise, which features multiple couples in its finale.

In the weeks leading up to Monday’s announcement, Bachelor creator Mike Fleiss had heavily teased a “historic” announcement on his Twitter feed.

The Bachelorette seemed poised to cast its first Asian lead last season when fan-favorite contestant Caila Quinn, who is half-white and half-Filipino, was spotted with a film crew in her hometown. In a last-minute decision, however, the franchise went with JoJo Fletcher, whose mother is Iranian and whose father was born and raised in Tennessee.

Though 2014 featured the only diverse Bachelor in the franchise’s run, with American-born Venezuelan Juan Pablo Galavis, The Bachelorette has inched ahead of its male counterpart when it comes to featuring diverse contestants. Fletcher’s group included 21 white and six nonwhite contestants to start, whereas the previous Bachelorette with Kaitlyn Bristowe featured four nonwhite men.

The series continues to enjoy an exceptional season in ratings, topping its broadcast competitors with another 2.3 rating among adults 18-49 for the Feb. 6 episode.