The Actor’s Key, the most prominent and busiest casting workshop firm in Los Angeles, has gone out of business after the City Attorney’s office brought predatory labor charges Feb. 9 against its owners, manager and several casting professionals who were employed there.

“As a result of these circumstances, we have found that there is no realistic alternative to closing the business, and commencing bankruptcy proceedings under Chapter 7,” the business wrote in an email blast to its teachers and acting students on the afternoon of Feb. 14. It continued: “Although we are hopeful that those of you [who have paid for unused workshop] credits and/or claims for refund will get at least a small dividend from the bankruptcy case, it is too early to tell whether that will be the case. The Chapter 7 Trustee will determine if and to what extent there will be any payments to creditors.”

On Feb. 13, The Actor’s Key told The Hollywood Reporter that it had purposefully begun marking its future workshops as “full” in order to keep people from signing up for them. “We want to do our best to ensure that payments are not made for classes that we do not expect to be held at this point in time,” a spokesperson explained.

The firm’s owners, Kristen Caldwell and Katherine Shaw, and manager, Jessica Gardner, will be arraigned in March, each on multiple counts. Casting professionals who have taught at the Actor’s Key — Nancy Foy (Paper Towns), Ricki Maslar (The Bronx Bull) and Rachel “Maggie” Bacharach (Heartbeat) — will each also face one misdemeanor charge for violating California labor code.

The Actor’s Key was one of five workshop firms named by City Attorney Mike Feuer as part of his crackdown, an unprecedented enforcement of the Krekorian Talent Scam Prevention Act. (More than two dozen individuals were charged.) Another firm, Your Studio Productions, shut down the day after the charges were filed. Pay-to-play auditions have emerged as a cornerstone of Hollywood’s labor market, THR found in an investigation 10 months ago.

“I want to underscore what the rules are,” Feuer said at a press conference announcing the charges Feb. 9. “It’s unlawful to charge any performer for an audition, even if that supposed activity is disguised as a workshop.” Added Duncan Crabtree-Ireland, general counsel for SAG-AFTRA, who also took the podium: “These workshops prey on the hopes and dreams of people that want to work in this industry.”

See the email below. 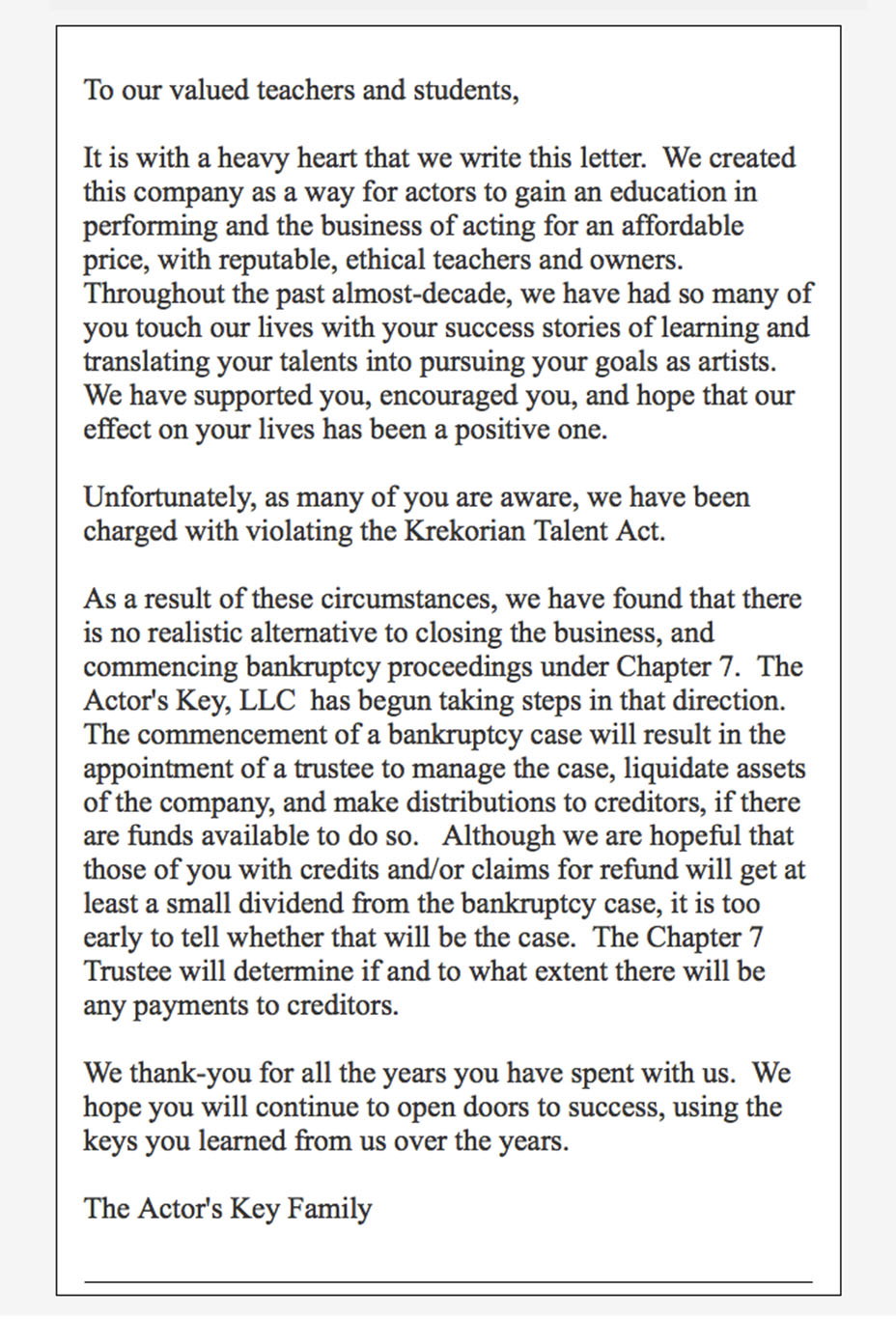