It hasn’t been that long since the Golden Globe best actress field was thin enough that the HFPA could be swayed into oddball nominations like Callie Thorne for Necessary Roughness or Piper Perabo for Covert Affairs. Well played, USA.

It’s only been a few years since the SAG Award for female actor in a drama could go to Maggie Smith for five minutes of expert sarcasm on Downton Abbey. Well, everybody loves a Dame.

Now, as a winter of award nominations looms, it’s the best actress fields that are clearly the most competitive on the TV side, the categories most likely to be simultaneously packed with A-list powerhouses and yet still exclude a chorus of the medium’s finest work.

There’s little worry that Hulu’s breakthrough The Handmaid’s Tale is going to be excluded. Although Globes voters love to be the first to coronate a new show, they’ll be hard-pressed to resist this Emmy darling, especially star Elisabeth Moss. The all-too-realistic dystopian adaptation of Margaret Atwood’s revered novel sports a cast made for the SAG ensemble field, one that could also fill the supporting actress category with names like Alexis Bledel and Ann Dowd and Samira Wiley, were it not for the Globes’ peculiar insistence on lumping all supporting performances — comedy, drama and movie/miniseries — into the same field. 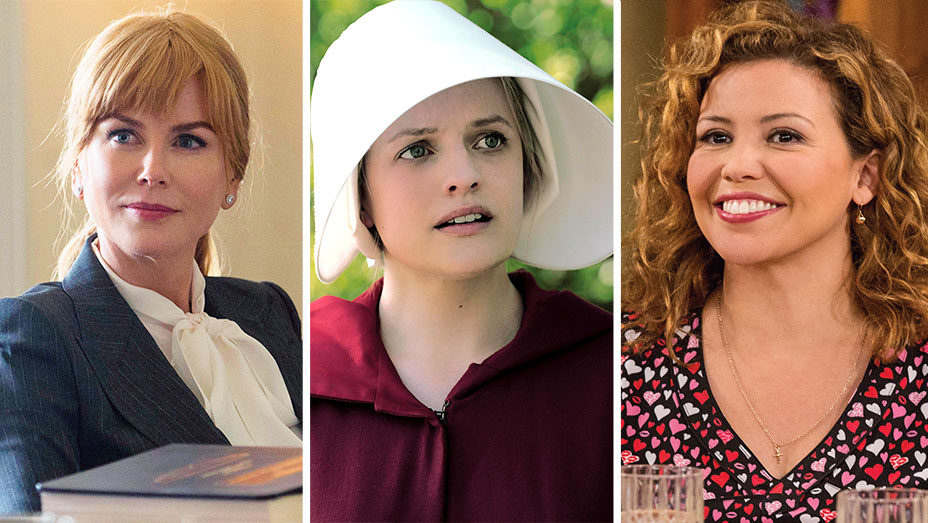 Moss will probably be part of one of this award season’s biggest trends, namely actors seeing double and I’m not talking about the likelihood that James Franco and his co-star James Franco could both be nominated for The Deuce.

Now bear with me, because this is going to get complicated: In addition to The Handmaid’s Tale, Moss will probably get a movie/miniseries actress nomination for Top of the Lake: China Girl, where her competition will probably include Nicole Kidman for Big Little Lies, but Kidman is also impressive in a supporting role in Top of the Lake: China Girl and could be nominated there, but only if she can beat out Big Little Lies co-stars like Shailene Woodley and Laura Dern, who has a stiff rival in Laura Dern from Showtime’s reboot of Twin Peaks. Facing off against Moss and Kidman in the movie/miniseries field will be Kidman’s Big Little Lies foil Reese Witherspoon and a pair of other co-stars in Jessica Lange and Susan Sarandon from FX’s Feud: Bette and Joan, another limited series that could handily fill a supporting actress category with names like Jackie Hoffman and the Globes-friendly Catherine Zeta-Jones, who are both more likely to get squeezed out.

Also eligible, but unlikely to pull the deuce, not to be confused with strong awards contender Maggie Gyllenhaal of The Deuce, is critical darling Carrie Coon, who may have to settle for another Fargo-only nomination, though a Leftovers nod would give the HFPA a rare chance to “discover” a show after three seasons.

Since the shows premiered after the Emmys, Globes and SAG will also get the opportunity to be early adopters for star turns like Gyllenhaal’s down-and-dirty Deuce work, Sarah Gadon in Alias Grace, Rachel Brosnahan in The Marvelous Mrs. Maisel and Laura Linney in Ozark. And after years of being overlooked, the SAG ensemble category feels tailor-made for the perfect cast of Halt and Catch Fire, led by individually worthy Mackenzie Davis and Kerry Bishe. It’s never too early and it’s not too late.

The comedy side lacks a new juggernaut like The Handmaid’s Tale, but that doesn’t mean there aren’t ascending actresses champing at the bit for exposure, especially with awards groups that the incredible Julia Louis-Dreyfus hasn’t dominated to quite her Emmy extreme.

Is Netflix’s ’80s-set wrestling comedy GLOW ready to enter the ring? Even though she’s been well known since her Community days, Alison Brie is exactly the sort of star-on-the-brink the Globes like to champion and the deep cast of relative unknowns is, like GLOW EP Jenji Kohan’s SAG favorite Orange Is The New Black, a textbook ensemble.

Is One Day at a Time breakthrough Justina Machado in the Globes wheelhouse, while her co-star Rita Moreno fits better with SAG voters and their love of acclaimed veterans? Either way, the Netflix multi-cam is one of the year’s unsung treasures.

Pamela Adlon didn’t make the Globes or SAG cut last year, but the Better Things mastermind is also worthy of recognition from the Directors Guild and Writers Guild and pretty much any assemblage of craftspeople who want to recognize excellence.

A surprise nomination could help make the name of a DeWanda Wise from She’s Gotta Have It or a Logan Browning of Dear White People, or maybe award voters are just going to return comforting names like Megan Mullally and Debra Messing of Will and Grace.

Expect men to also be nominated for Golden Globes and SAG Awards.