How’s this for an introduction: In Seth MacFarlane’s new Fox dramedy The Orville, Kelly Grayson (Adrianne Palicki) is caught cheating on her husband (MacFarlane’s Ed Mercer) with a humanoid blue alien. In true MacFarlane fashion, the scene culminates in an ejaculation gag that leaves the unfaithful wife spattered with blue liquid.

“That was one of my big fears coming onto this,” Palicki told The Hollywood Reporter of the show’s premiere episode, which initially paints her character in a distinctly unflattering light. “Initially I’m like, ‘How do you get out of being this character?’ You immediately hate this woman, right?”

“Hate” may be too strong a word (at least for some), but it certainly presented Palicki with an uphill battle in getting audiences on board with her character. Luckily, the Friday Night Lights alum who counts a recurring role on ABC’s Marvel drama Agents of SHIELD is a likable presence onscreen, and Kelly is redeemed early on. “The arc of even just the first episode, by the end [she’s] kind of a hero,” Palicki says.

Palicki’s role on the series came about partially because of her close friendship with MacFarlane, whom she’s known for nearly 10 years. After meeting with the Family Guy creator and falling “in love” with the script, she signed on to play his ex-wife and sometimes-nemesis, who is awkwardly assigned the role of Mercer’s First Officer aboard the Orville.

When it comes to the show’s visual style, fans of Star Trek (particularly The Next Generation) will note an abundance of similarities to that beloved franchise. (It’s worth noting that several critics have deemed it too similar.) That of course is intentional on the part of MacFarlane, an avowed Star Trek superfan who pays homage to his inspiration in strikingly overt fashion. Palicki doesn’t exactly share his enthusiasm for Gene Roddenberry’s vision, however.

“I have to be honest with you. I would watch [Star Trek], but it wasn’t necessarily my, you know — I was not Seth, if you will,” Palicki says. “He was obsessed with it. I have a respect for it, and I think that we do a nice nod to the franchise. … So I respect that, but I genuinely growing up was not — it wasn’t my thing.”

“I think there’s going to be a lot of people who think it’s just a straight comedy, but I think that it’s — I’m hoping people will be pleasantly surprised by the fact that it is so much deeper than that,” says Palicki, who noted the series will continue to deal with political issues going forward. “I don’t think it’s touched on in a ‘wag your finger’ kind of way. I think it’s touched on in a very interesting, ‘make you think’ kind of way. Which I think will also be shocking to people.”

As for the more traditionally shocking humor MacFarlane has made his brand on, Palicki said gags like the one seen in the opening moments of the pilot won’t be a constant component of the series. Still, the man who once dumped fake semen on Mark Wahlberg has a hardcore fan base whose expectations run to the gag-inducing. “There are [gross-out] moments there that are necessary,” says Palicki. “Because I think there’s an audience, too, that needs to be catered to.”

Catering to fans (or at least attempting to) is a concept Palicki knows well. In 2011, she was famously cast as Wonder Woman in NBC’s ill-fated David E. Kelley pilot, which was ultimately abandoned — though not before many fans and critics voiced their discontent when a first-look image was revealed of Palicki in costume. So how does she feel now that Gal Gadot has made the role her own in Patty Jenkins’ blockbuster film version? 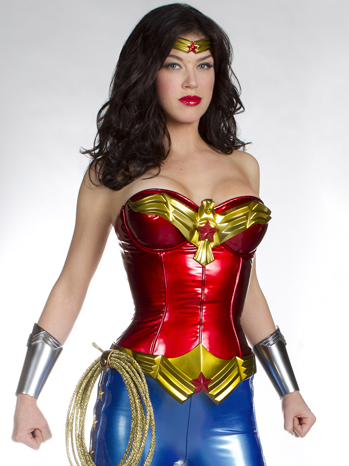 “I was devastated when the pilot didn’t go,” says Palicki, who hadn’t yet seen the movie at the time of this interview. “But I also look at it, like, I got paid to wear that costume. And that is one of the coolest moments of my life running down Hollywood Boulevard. Like, that was so cool. And I was — how lucky am I. And you know, everything for a reason. It led me here. You know what I mean? So as dark as those moments were back in the day, I’m happy and so glad that somebody else gets to wear that costume. I’m so glad that [Gadot is] rocking it.”

Speaking of costumes, Palicki is keen on Gadot’s more muted iteration of Wonder Woman’s classic red-and-blue duds (“It’s real badass. It looks heavy,” she said) while implying that hers was less “dark and cool” owing to its small-screen origins. “Mine was probably more of a TV version,” she admitted. Not that she’d trade outfits with Gadot at this point in the game.

“Eh, I think I’d [rather] be wearing the Orville costume,” she laughed.

The Orville airs Sundays on Fox.