[Warning: This story contains spoilers from episode “408” of Showtime’s The Affair.]

Alison Bailey’s (Ruth Wilson) life had been filled with enough tragedy, heartbreak and loneliness to make her demise seem inevitable. But that demise coming before the end of The Affair‘s penultimate season only adds to the shock that one half of the titular extramarital coupling that started the Showtime drama won’t be there to wrap up the intense series when it ends next year.

In episode eight of The Affair‘s 10-episode fourth season, rivals Cole (Josh Jackson) and Noah (Dominic West) are drawn together for a road trip to search for their MIA ex-wife. It’s an unexpected pairing that includes some welcome, but even more unexpected, levity and bonding, until it all ends with the shocking, but perhaps ultimately inevitable, news that Alison has died by suicide by drowning herself near her home.

Below, The Affair co-creator and showrunner Sarah Treem talks with The Hollywood Reporter about when — and why — it was decided Alison would die now and how her story is far from over.

'The Affair' Renewed for Fifth and Final Season on Showtime

To be clear, Alison is dead? That is Alison’s body Noah saw in the morgue?

Was this always the plan for Alison from the very beginning?

No. It was always a possibility for Alison. When I was coming up with Alison, I was thinking of this character we were going to meet right after her child died. As any parent would ask themselves in that terrible situation — even hypothetically as you do sometimes — would you be able to survive it? So that was always a question that I had for the Alison character as a kind of an existential question. How does a parent survive it? And would this character ultimately be able to? That is a question that she was asking herself when we first met her, before she met Noah. And in so many ways the impetus for the affair from Alison’s perspective was trying to outrun that pain. It was always a possibility for Alison somewhere in my mind that she wouldn’t ultimately survive.

At what point did you decide Alison would die this season? And why at this point in the story?

Ruth wanted to leave the show. That was a request, so that was decided basically before we started writing. It wasn’t a discovery of any kind. That was very deliberate. And actually, we shot all of her work first. Her whole storyline was shot before we shot anything else. 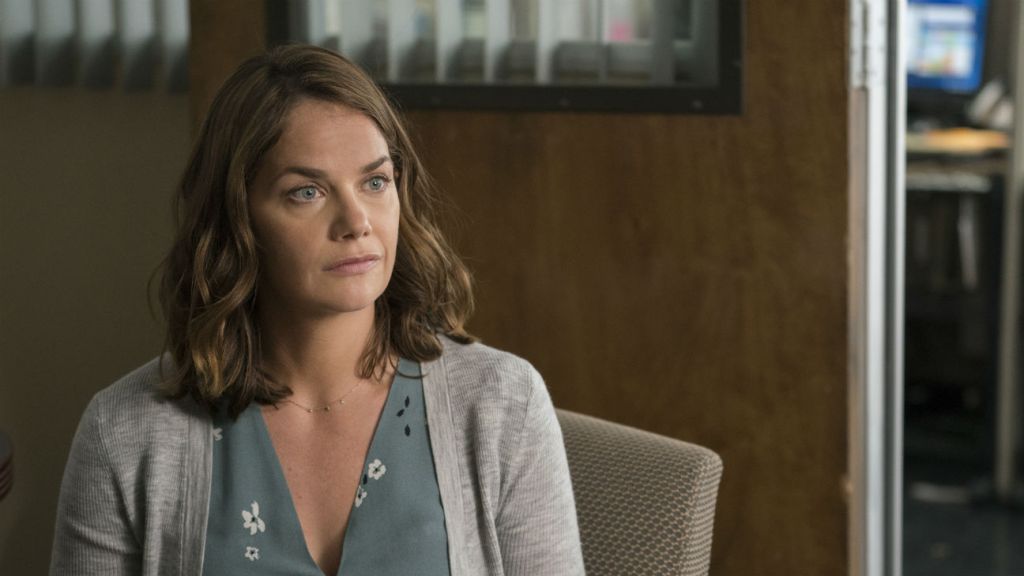 Viewers have been privy to more pain in Alison’s life since the show started. She just had that talk with Helen (Maura Tierney) at the end of “406.” And it seemed so pivotal to Alison. Someone she had wronged told her she could and should change her life. She could demand that men treat her with respect. This was an important revelation to her.

The stories we tell ourselves are important, they’re necessary for survival through the traumatic time, which applies to Alison as well. In order to try to make sense of what happened to her son, and even before, what happened to her, not having a father, her mother was always absent  … she had to tell herself the story that she just wasn’t worth anything, that she deserved [the pain] somehow, that she wasn’t worth being loved in a way that other people are worth being loved because if she had been, then why would her father have left? Why was her mother never around? Why did this happen to her son? We tell ourselves these really dysfunctional stories in order to survive. They keep us going, they make sense of things that don’t make sense. But at a certain point, the stories are old, and we’re just hurting ourselves by telling them again and again. That’s what Helen is trying to say to Alison. “The story’s old and now all that’s happening is you keep telling yourself it so you’re making it through.” That is the tragedy of Alison’s death; it’s exactly at the point when she finally learns that lesson that she dies.

And she really did appear to take that message to heart. Which suggests something else must have happened after she left California, for her to be back in a psychological state where she would end her own life.

You don’t know the whole story at the end of [this episode].

You recently tweeted that these next few episodes are some of the most “intense” of the show and that they play out like a trilogy. Is Alison’s story continuing?

Though we learn that Alison dies in this episode, “408” is largely Cole’s story …

It is a tour de force for Josh.

It feels like all these characters see this tragic end for Alison as inevitable. Is that how they all saw her, especially in terms of her relationship to them?

Yes, in general, but mostly, specifically, with Cole. Part of the tragedy of the Cole-Alison relationship is that they did get stuck in a dynamic in which he felt she was so fragile that she was going to disintegrate at any given time. Ultimately part of what happened to their relationship was that he always treated her like she was about to break, and was so afraid of her breaking that he wouldn’t just let her breathe. There was this dynamic that he talks about a little bit in episode “405” where he was so afraid of her pain because I think he thought it would break her. I also think it reminded him so greatly of his own pain, because Cole really is a big denier. In that way that parents sometimes do with children, he tried to keep her from her pain by basically not letting her feel her pain. Then she couldn’t be honest with him, and she felt like she was always disappointing him by not being happy. And so even though they loved each other so much, there was no freedom in their relationship. They were always trying to, in some ways, control each other. Or he was trying to control her, and she would escape it. I do think Cole’s love for Alison is absolutely undeniable, but I don’t think he, in some ways. was ever able to move on from the death of their child either. Their relationship basically got stuck there. I do think in some ways that Cole always thought he was going to lose her from, basically, the very beginning of the series. And even though he doesn’t want to believe it in [this episode], as soon as he walks out of that conference, he thinks she’s dead. Or he’s afraid she’s dead.

Cole’s personal tragedy within this is that he just went on this big self-discovery journey during which he finally got clarity on his relationship with Alison. He figured out he still loves her and wants to be a family with her and Joanie. And he was just days late in telling her that.

It’s interesting because these characters go through so much, and there have definitely been times over the years where people have been angry about that. And they’re like, “Oh you must hate these characters.” And it’s like, are you kidding? I love these characters more than anything, and that’s why they suffer so much, so deeply, because I’m trying to put them through the entire range of human emotion. Characters you didn’t love or didn’t believe in, you wouldn’t care enough to invest with this tragic journey with them.

Cole and Noah for the first time really spend significant time together. Was this a meeting you always wanted to happen?

Absolutely. The women had experienced it, but not the men, and that felt like it was going to take a lot more to get the guys together. I tried in previous years, but it never really felt like the right circumstances. I couldn’t figure out the circumstance in which they would really ever honestly interact with each other, except if it was going to be over her. As soon as I knew Alison was going to die, I knew that this was going to happen. We tease it from the very beginning of the season. I love that argument where Noah thinks that Alison needed to be freed from these very patriarchal, small town, oppressive circumstances that she was in. And Cole thought that she was a grown woman who had chosen to be there, and that Noah was terribly presumptuous to think otherwise. And honestly, this is how I treat The Affair in general: I think both are true. I don’t believe that one of the men is more right than the other. I do think that Alison was yearning to get out and saw Noah as a way forward, as a fresh start, as somebody who saw her differently … I think the Alison in the second season is very much a fish out of water. She comes to New York with him, she’s trying to create a life, but she ultimately wants to go home. And so Cole’s right about that. They’re both right. 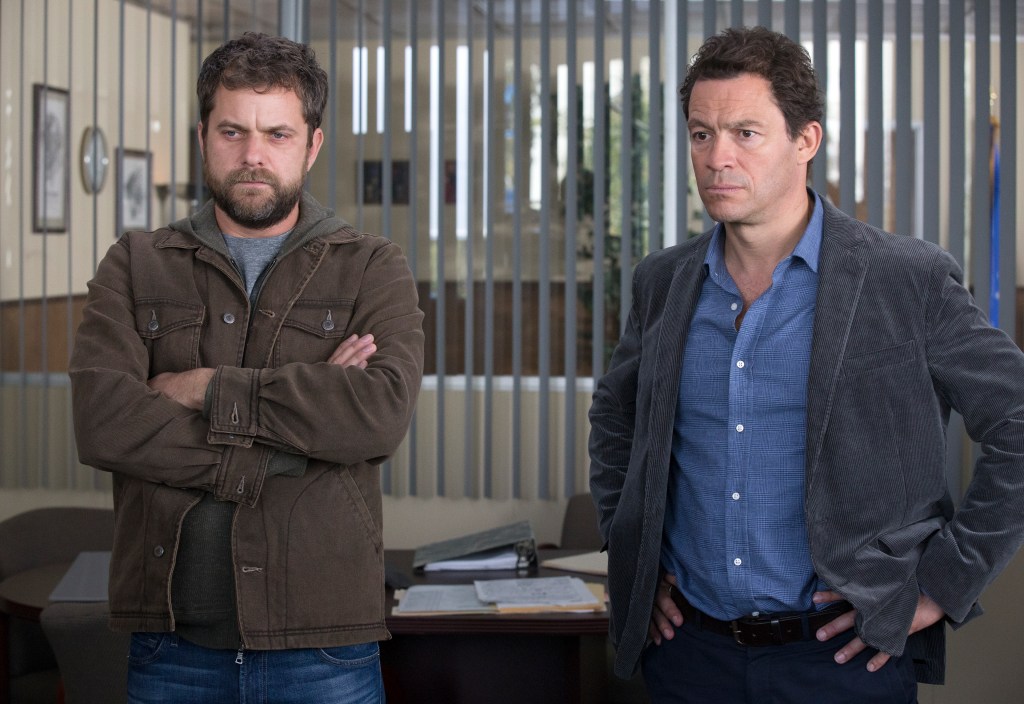 James yells out when Athena tells him Alison is dead. He came into her life suddenly and asked her to donate a kidney. Her death means that option is gone. Is there any genuine sadness for the loss of Alison or was that completely a reaction to his own loss of the chance for a transplant?

The thing that’s always true about The Affair is that it’s all coming from perspective. And so in my mind … James didn’t necessarily ask Alison for a kidney in this. You just don’t know. He’s specifically playing a character who is not necessarily the same character as the man that Alison met. That was filtered through her own perspective, so yes, I do believe that there’s genuine feelings and there’s genuine loss for James in that moment. I think this James is a more complicated character than the one Alison met, who’s basically an incredible user and sort of evil.

And then there’s Ben. The episode ends with police ruling Alison’s death a suicide. Cole doesn’t believe that. He doesn’t believe she would do that to Joanie. And with every interaction Cole has with Ben in this episode, including at the hotel at the conference, he seems to have some intuition about Ben that something isn’t right or isn’t as Ben says it is. What can you say about the situation with Ben and this feeling that Cole has?

I would say that there’s a couple of weird things about Ben over the course of the season. That if you’re paying really close attention, he’s strange. Besides the fact that he’s married; that’s the least of our problems. The fact that Ben’s screwing around on his wife, that basically just means he’s a character on the show. [Laughs.] But beyond that … you definitely don’t know the whole story at the end of “408.”

What did you think of The Affair‘s surprising decision? Sound off in the comments section, below. The Affair airs Sundays on Showtime.