[This story contains spoilers from the first season of Netflix’s Altered Carbon.]

If you thought San Francisco had elevation issues before, wait until you get a load of Bay City.

In the future-set universe of Altered Carbon, the new Netflix science-fiction series from executive producer and creator Laeta Kalogridis, mercenary Takeshi Kovacs (Joel Kinnaman) wakes up after several centuries in a strange new body, wandering a strange new world. The drama, based on a novel of the same name by Richard K. Morgan, sees Kovacs and the other denizens of this far future holding access to all kinds of spectacular technology — from the ability to swap one’s consciousness into a new body via “stacks” and “sleeves,” to high-rise buildings that give all-new meaning to the word “skyscraper,” to ocularly implanted smartphones, just as a few examples.

'Altered Carbon' Creator Laeta Kalogridis: How I Made It in Hollywood

The team responsible for bringing Altered Carbon into such extensive, expensive and expansive existence includes visual effects supervisor Everett Burrell, who relied on numerous resources and inspirations to establish the unique aesthetic of 10 ten-episode series. Speaking with The Hollywood Reporter, Burrell opens up about how he and the other members of the Altered Carbon team joined forces to bring one of the most ambitious fictional worlds in modern television history to stunning life. 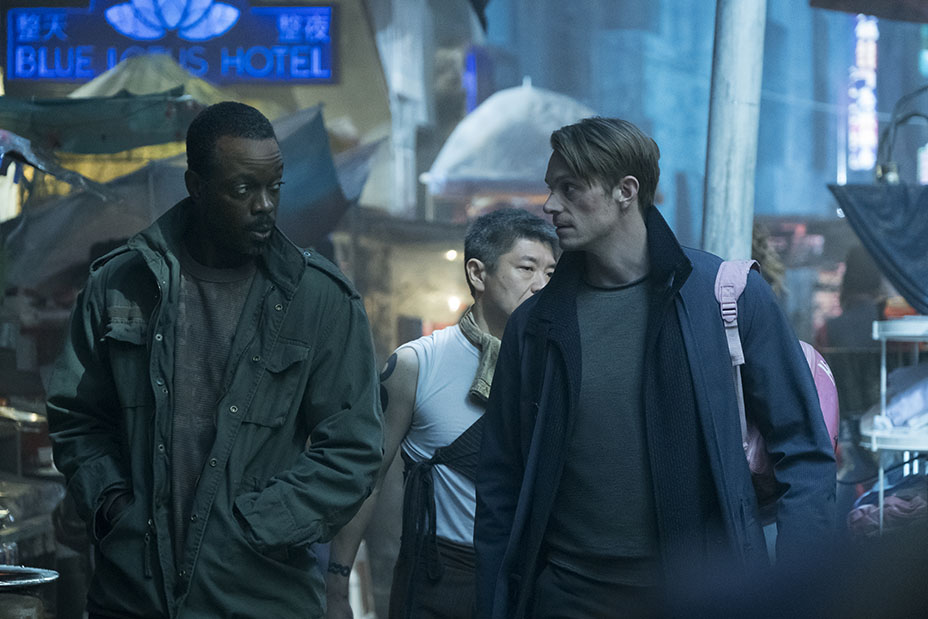 How did you start the process of imagining the expansive universe of Altered Carbon, set hundreds of years in the future? Was there a conversational starting point that helped you develop visual themes?

Absolutely. I started in May of 2016, and it was myself, [production designer] Carrie Meyer, [executive producer and creator] Laeta Kalogridis, [executive producer and writer] Steve Blackman and a few other department heads who sat around a table and started plowing through amazing references. Carrie had gathered great architectural reference from around the world… brooding, gaudy, all of this amazing artwork. I brought in all of my science-fiction inspirations I had at home. We plowed through everything. You name it, from Fritz Lang’s Metropolis all the way through Blade Runner.

We knew we would very much be compared to Blade Runner, because the book was written by Richard Morgan, who admitted that Blade Runner was an inspiration for Altered Carbon. We knew going into this that we would be compared to it, so we tried to embrace it, but not be a copy; to try and give it our own spin. We went through hundreds of books and magazines and references online in order to really define the different looks of the different parts of our world. We broke it down into different sections for our city, which I think is apparent on our show.

That city is called Bay City, which is a re-imagined San Francisco several centuries into the future. It’s a multi-layered setting. How did you plot it out?

We had three different levels: “the grounders level,” which is the very low-rent district, the seedy part of Bay City; then we had “the twilight area,” which is sort of middle class and filled with people on the rise; and above all of that, there was Arium, which is where the [show’s wealthiest individuals, known as] Meths live. That’s Bancroft’s tower. The super-ultra rich built these buildings so tall that they can’t be touched. It’s symbolic as well as visual, that Bancroft (James Purefoy) has truly built himself an ivory tower to get away from it all. And then there’s the question about the technology. How can a city build these buildings so tall? In reading the books and doing some research, we figured out that they are using this “elder tech,” which is an alien technology that humans have been using to power their flying cars. The stacks are part of the elder tech. Bancroft’s building has an elder technology that keeps it standing 8,000 feet in the air. In order to keep something that tall from collapsing on itself, it has to have something special going on. The elder tech is weaved throughout the city. You’ll see structures weaving throughout the buildings, structures that aren’t normal, and that’s part of it.

There are smaller, subtler science-fiction flourishes found throughout Altered Carbon — such as the ocular implants Ortega (Martha Higareda) uses to make phone calls, as one example. These details are easy to miss, but really help in creating this cohesive world.

The ONI — the ocular neural interface — is like the futuristic cellphone. There are different models, too. You’ll see Ortega has more of a military ONI. Kovacs has a high-end almost Rolex-style ONI. There are others, too — like Elliot, who has something a bit more low rent because he doesn’t have a lot of money to spend on an ONI. We tried to design each of these interfaces to suit the financial whims of the person wearing it. The ONI has different levels of blocking. If you don’t block all of those ads — like, for example, when Kovacs first puts his ONI in and doesn’t know how to use it properly, he sees a million ads popping up in his face and all around the buildings. It would make your brain freak out! There was definitely a level of figuring out how much you can see, how much you can control it. If you’re new to it, you can have this mental overload, which is what happens with Kovacs in that Bay City scene. We talked a lot about these design elements. We worked with a lot of great designers to help with the interface, including Rushes in the U.K., who work with [visual effects company] Double Negative, who were our main vendor. We went through quite a few different iterations to make something unique and cool, but also keep it common to the interfaces of today. 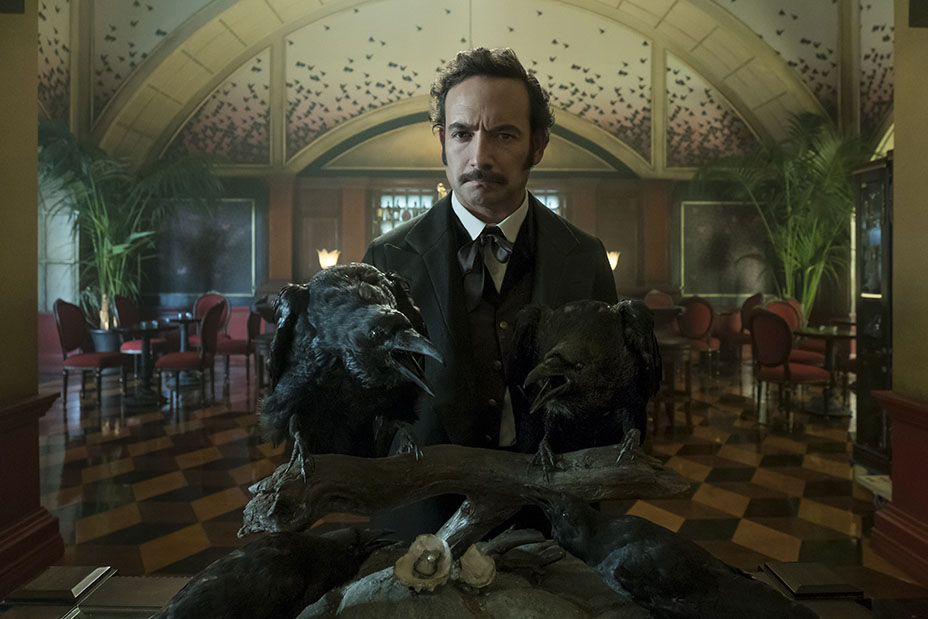 Virtual reality plays a massive role in the world of Altered Carbon, whether we’re talking about AI characters like Poe (Chris Conner) and his work as the proprietor of the Raven hotel, or the virtual realms where Kovacs and others are tortured. How did you define the difference between the look of the “real world” versus the virtual one?

Every time you enter a VR world, we used a very special VR camera. It has I believe eight different camera lenses, and then we flatten that image out so you have a 360-degree view when you’re entering the VR world. Automatically, it’s something unique we haven’t seen before in any film. Normally when you shoot with a VR camera, it’s meant to be used with a VR headset. We basically took that VR data and flattened it out, to represent it in our flat and 2-D world. It was very cool, but definitely a challenge. Every VR set piece had a very special look designed by our colorist Jill Bogdanowicz. She did this amazing job helping us pinpoint these different unique looks. Lizzie [Hayley Law] has a different VR look than, say, the torture scene for Kovacs. Every little cool VR thing had its own look and they would all pulsate with almost a heartbeat within the world.

'Altered Carbon': Inside the Drama's 15-Year Road to Netflix

Altered Carbon is remarkably action oriented. It feels like there’s at least one major fight scene per episode. Does one stand out to you as more challenging than the others, in terms of the complexity of the effects?

There’s a very memorable action sequence with Ortega: a sword fight between her and [Dichen Lachman’s Rei], where they’re wearing next to nothing — or pretty much nothing at all! That was a really difficult sequence, obviously because of the situation the actors were in, not having clothes on. That’s a tough scene to navigate around, keeping it cool and action oriented while also not revealing too much. We don’t want to get an X rating. That was a challenge, keeping it amazingly well-choreographed while also being prudent about the nudity. All of the fights had their own unique challenges. 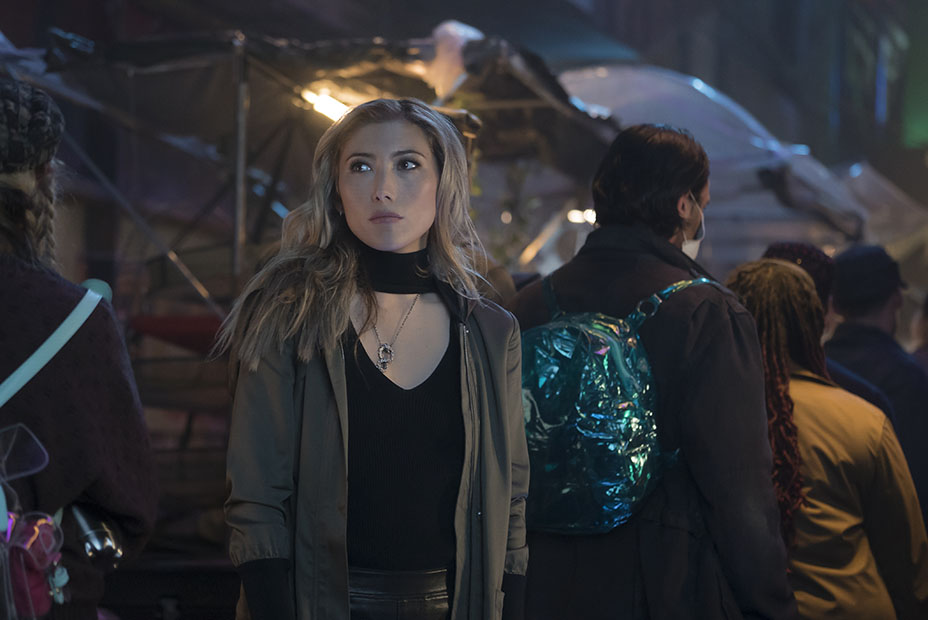 Are there any other elements from Morgan’s novel that you wish you could have translated to the screen?

There are a few things that we simply couldn’t do, just from a shooting sense. Having 10,000 naked Miriam (Kristen Lehman) clones on a beach [after she and Kovacs fly off on vacation together] would have been very difficult to do. I thought the solution we came up with was pretty effective. Just from a practicality sense, there were a few things we couldn’t do. But we really tried to hit most of the big beats.

Are you already thinking about worlds from the Altered Carbon universe we could see in a second season?

Definitely. The elder tech and getting into that — who the elders are — we sort of hint at it. In fact, you see an elder artifact hanging on a wall in the last episode, the skeletal remains of an elder. Getting into that in the [future] seasons should be interesting — and definitely other planets and areas. We mention a few. But we hit a lot of what’s in the original book. Laeta really tried to nail everything that was talked about in some way. We either showed it or we hinted at it.

What impressed you most about the first Altered Carbon season’s vast world? Sound off in the comments below and keep checking THR.com/LiveFeed for more coverage of the series.