After a 15-year path to the screen, Altered Carbon will officially launch Friday on Netflix.

The 10-episode drama, based on Richard K. Morgan’s 2002 novel, has taken what could generously be called a meandering route to the screen. Although the film rights were optioned by Warner Bros. and producer Joel Silver the same year as its publication, the project remained in development purgatory for nearly a decade.

Only after the studio’s option expired did it find a savior in Laeta Kalogridis, the screenwriter whose muscular filmography includes such films as Shutter Island, Terminator Genisys and the forthcoming manga adaptation Alita: Battle Angel.

For Kalogridis, the book’s premise of a world where human consciousness has been digitized — thereby allowing it to be transferred from body to body — represented a world of possibility in the grand cyberpunk tradition of William Gibson and Philip K. Dick. Like any true science-fiction fan, she also knew that doing it halfway wasn’t going to cut it. “The edict at [Warner Bros.] was to make a PG-13 movie out of it, and I was just like, dude, I have no idea how you do that based on the source material,” Kalogridis tells The Hollywood Reporter.

Clearly, Warners didn’t either. After the studio’s rights to the title lapsed, Kalogridis dialed up Morgan to pitch him on her “hard R-rated” vision for the adaptation. While the author was immediately sold, Kalogridis encountered a sizable roadblock when trying to get the drama (a co-production between David Ellison’s Skydance Media and her own Mythology Entertainment) set up. Namely, studios weren’t exactly scrambling to bankroll an R-rated, thematically complex sci-fi film not tied to an existing franchise. Shoehorning the novel’s intricate framework into a two-hour running time posed an additional challenge.

“I started imagining what would happen if you tried, for economic reasons, to take a Lawrence of Arabia and put it into two hours instead of the four hours that it is,” says Kalogridis. “It would never have functioned, right? I thought, ‘Maybe I am trying to make this conform to a form that it isn’t really naturally suited to.'”

As the feature version continued to flounder, the rise of ambitious, close-ended TV series like FX’s Fargo caught the attention of Kalogridis and Skydance chief creative officer Dana Goldberg, who ultimately brought the IP to Netflix vp originals Cindy Holland. Unlike the major studios, the streaming giant wasn’t scared off by the material’s bleak dystopian vision, and a deal was eventually made based in large part on Holland’s championing of the project. 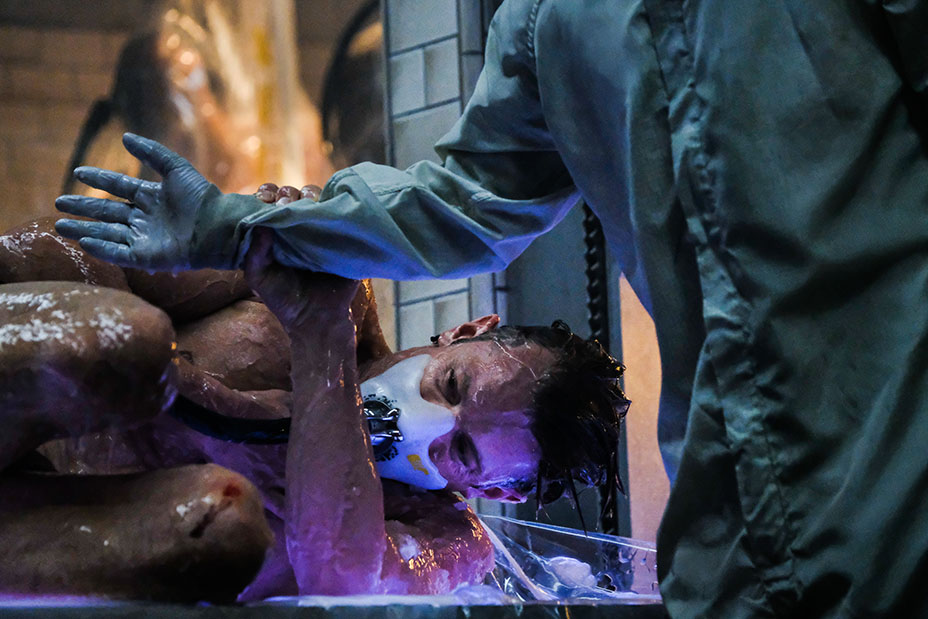 “Bleak” is perhaps an understatement, as Altered Carbon is about as bloody and disturbing as sci-fi gets. In a nutshell, it depicts a 25th century world in which the wealthy (known as “Meths”) live for hundreds of years by placing their digital consciousness (aka “stacks”) into new and improved bodies (“sleeves”) once the old models begin to wear out. Not only that, but they engage in barbaric forms of entertainment; in one scene from the series’ third episode, a lower-class couple fight to the death in a zero-gravity chamber as the rich and powerful spectators cheer.

As the series opens, a former elite military fighter turned mercenary named Takeshi Kovacs (Chinese-American actor Bryon Mann) is subdued and killed, only to be “re-sleeved” 250 years later into the body of Elias Ryker (Joel Kinnaman). He later learns that he’s been called into service by a recently murdered Meth named Laurens Bancroft (James Purefoy), whose stack survived the attack thanks to a cloud-like system that remotely stores the consciousness of those wealthy enough to afford it. Still, he retains zero memory of the alleged crime, as his original stack (think of it as an iPhone) was destroyed just 10 minutes before it was due for an update.

The plot isn’t the only thing that’s complex in Altered Carbon. Its racial politics are also thorny, and the series has already been charged with whitewashing in its concept of an Asian man (played in his original original adult form by Korean-American actor Will Yun Lee) literally waking up in the body of a white guy. Kalogridis, who worked on the script for Ghost in the Shell before Scarlett Johansson was cast, is nothing if not sensitive to the issue, and she said she understands the concerns of those critics even if she doesn’t agree.

“Of course I worry about whitewashing and I feel very strongly that whitewashing was, is and continues to be a problem in entertainment,” says Kalogridis, who was herself critical of Johansson’s casting. “And I wanted as much as possible to try and mitigate those concerns. But I want to be really clear that I can’t be the arbiter of whether or not I succeeded. The audience will have to see how they feel about it.”

In attempting to avoid charges of whitewashing, Kalogridis greatly expanded on Kovacs‘ backstory in the scripting stage, taking what amounted to “a couple of sentences” in the novel and substantially fleshing it out. This change, she says, offers an emotional window into the character that wasn’t present on the page.

“By creating the story of Kovacs as he grew up … I was able to create a part for an Asian man in a leading role in this television show where he becomes emotionally as important as Joel, [and] is represented as opposed to talked about in the past,” says Kalogridis, who points out that this storytelling choice provided roles for three different actors of Asian heritage. “So a whole different and much richer … storyline that has a lot of meaning and a lot of emotion and informed every single thing that happens in the present day, you see Will Yun Lee embodying that part. … Very significantly, I didn’t want to erase Kovacs‘ Asian heritage. I wanted to play it up and to mine it.”

No doubt, Kalogridis is wading into some potentially dicey territory here, and a few early reviews have criticized Altered Carbon‘s pervasive depiction of sexualized violence against women, many of them sex workers. Indeed, some critics have suggested that in tackling themes of objectification, the show has itself become guilty of objectifying its female characters.

“First of all, I think that it’s incredibly important for artists to be called out for that kind of concern, so I actually welcome people’s readings of it,” says Kalogridis. That said, she clearly disagrees with the critics in question. “The nudity and the violence are absolutely equal opportunity,” she continues. “Full frontal is male and female in the show, and the worst violence is visited on Joel. Nobody else gets their legs burnt off while they’re still alive with a blowtorch.”

The scene Kalogridis is referring to here — in which Kinnaman’s Kovacs is brutally tortured in a virtual space that allows victims to be revived over and over after being killed — represents a distinct change from the novel. In Morgan’s version, Kovacs is tortured in the body of a premenstrual woman (i.e., a more “vulnerable” form) as a means of increasing his suffering. In the Netflix take, Kovacs is tortured as himself, which Kalogridis notes “is a conscious change from the book.”

What seems clear is that Kalogridis thought through the material’s gender politics in ways a man would have been less likely to do. For one thing, she beefed up a number of the novel’s female characters, including the doomed Lizzie, merely a plot device in the book who is given agency here (she also cast a woman of color, Riverdale‘s Hayley Law). “I was interested in personifying the cost of the way the Meths consume and Lizzie is that personification,” she says.

Mixed notices aside, the show’s eye-popping visuals are undeniable. The series not only looks impressive but expensive, and it has been suggested by some that Altered Carbon represents the costliest first season of television ever (and certainly the costliest on Netflix). But when pressed for an actual number, Kalogridis remains tight-lipped — though she did emit a hearty guffaw when pressed that some estimates have the series costing more than $7 million an episode. “That number is really funny,” she says with a laugh. “I feel comfortable saying that that number is not correct.” But is it wildly incorrect? “I would say it’s inaccurate.”

Whatever the cost — which was unquestionably substantial — Altered Carbon stands apart as a big-budget sci-fi series created by a woman in a genre traditionally viewed as the purview of men.

“To be believed in at that level as a female showrunner, working in … a genre that frequently is associated more with male showrunners, I feel like that’s the part that I am most proud of,” says Kalogridis.

As for the show’s more controversial elements, she indicates that any ensuing blowback will be worn as a badge of honor.

“This kind of art, the dystopic future kind of art, is designed to make you uncomfortable,” she says, steadily. “And if I have made people uncomfortable about the questions I’m asking them to examine, I don’t regard that as a failure.” 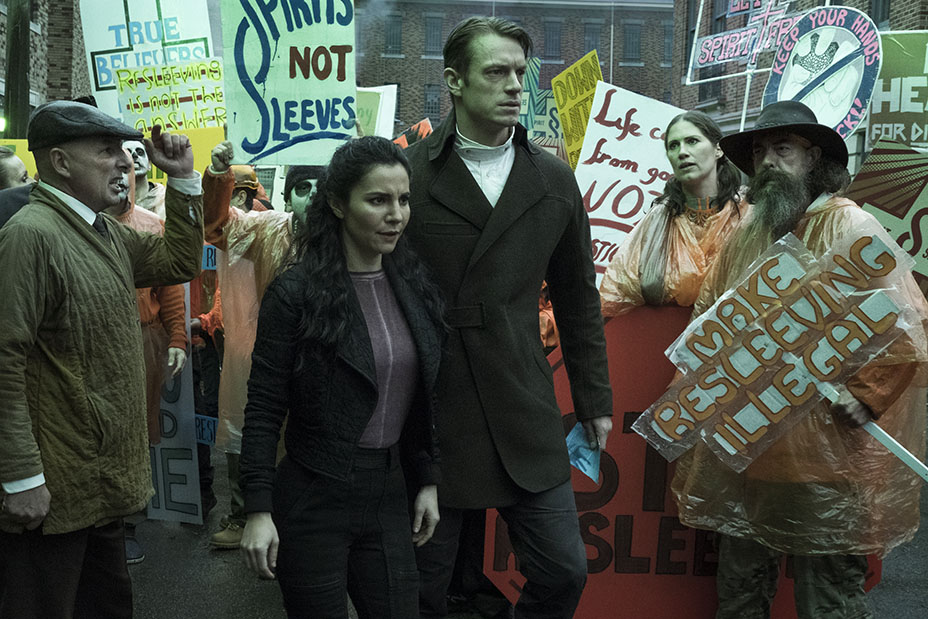