Two years ago, Altered Carbon came and went. The first season of Netflix’s sci-fi thriller, based on the Richard K. Morgan book series about a future where human consciousness can live forever over the course of countless bodies (called sleeves), ended in dramatic fashion: a bloody showdown between Takeshi Kovacs (Joel Kinnaman) and his sister Reileen (Dichen Lachman), hardened by time and circumstance. Forced to kill his own sibling, Kovacs ended the season by tossing away his Kinnaman sleeve and moving forward into an unknown future.

After years on ice, the answers to Kovacs’ next steps arrive in an eight-episode second season of Altered Carbon, dropping Thursday on Netflix. This time, Marvel Cinematic Universe veteran Anthony Mackie steps into the role Kinnaman left behind. Season two sees Kovacs with a new body, but on familiar turf: Harlan’s World, his home planet, where he’s once again thrust into the middle of a high-stakes murder mystery, albeit one that brings him closer to the love of his many lives — legendary rebel leader Quellcrist Falconer (Renée Elise Goldsberry), potentially still alive after all of this time.

On the face of it, Altered Carbon presents as somewhat anthological in nature, with a new prominent face taking on the lead role of Kovacs from season to season. (At least thus far; a third season is not yet renewed and, as such, there’s no word yet on a third actor set to embody the Kovacs role.) In actuality, the second season closely follows the first season’s fallout — particularly emotionally, as Kovacs not only searches for his long-lost love, but also searches for redemption after facing the unspeakable act of killing his own sister in the first season.

Below, season two showrunner Alison Schapker speaks with The Hollywood Reporter about the continuity between iterations of Altered Carbon, the benefits of having a new actor embodying the Kovacs role and the ways in which the drama continues exploring individuality in a world of immortality.

What did you want to accomplish with Altered Carbon, heading into season two?

When I came on board, [creator] Laeta Kalogridis was already mapping out season two. The idea was that this was going to be an anthology series but one that also had extensive continuity and rewarded viewers on a season-by-season basis as far as Takeshi Kovacs’ journey. In season one, we saw him walk out of the Raven on a search for Quellcrist Falconer. It felt like a promise was made to the audience, that he was going to find her, and that she may be out there in a new season. There was very much a sense that Quell was a ghost in his mind in season one. We wanted to explore what it might mean for her to be embodied in season two, and what it would mean to come face to face with someone you’ve carried around in your consciousness for hundreds of years. What does time do to your memory and to your relationships?

The goal of Altered Carbon is every season serves a new mystery and a new sleeve and a new planet. We were interested in exploring a more personal side of Kovacs in season two. The fact that Quellcrist Falconer was part of the equation meant the mystery would be more personal, and by going to Harlan’s World, the planet is more personal, too. We saw it as turning inward and a deepening of our understanding of Takeshi Kovacs — who he is, and what’s his history. What’s his past, and how does that illuminate the present and the future?

The series deals with a world where immortality has been commoditized, but ghosts from the past very much remain…

And ghosts are operative across the board. If you live on forever, think about the amount of baggage you bring with you. That baggage also goes on forever. Imagine the regret and the demons that pile up in one lifetime. Now think about multiple lifetimes. The reckoning gets all that more overdetermined. It’s the idea that we all have to make peace with things we did in the past. It’s relatable to everyone, but in Altered Carbon, it’s literalized. Sometimes, your past self or people from your long ago past actually exist and are angry and externalized and are coming to get you. 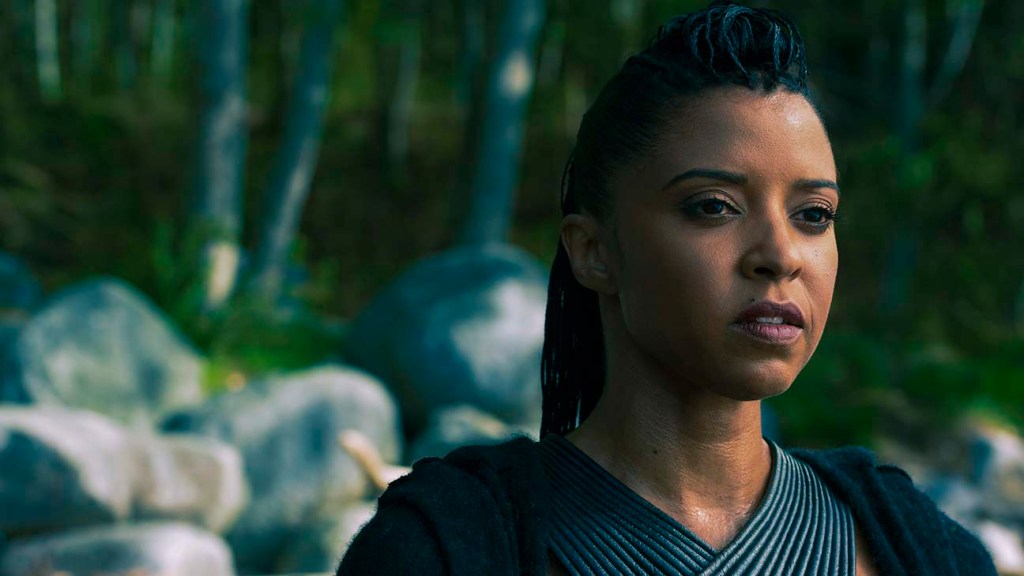 There are ghosts Kovacs carries forward from season one, notably his sister, whom he killed in the first finale. How does that recent past weigh in on him?

That was a huge action Tak took at the end of season one. It was not going to go down easily. It’s not something you just digest. In season one, he carried Quell around as this figment in his mind. Reileen was present in the world. In season two, here’s Quell back in the flesh, and Reileen is haunting him. Kovacs has to reckon with the climax of season one, killing his sister. It felt very moving to all of us, and certainly to me. It’s this unfinished business he has with himself. It’s going to haunt you. What are the things that haunt us? That’s certainly something that haunts him.

It’s a chance you don’t get often. It’s rare, even as a viewer. I think a lot about pleasure when I’m watching television. Part of the pleasure of TV is you’re inviting characters into your living room. You spend so much time with them. Week after week, even in the Netflix model, you’re bingeing so many hours with them. You come to know them and you develop real identifications and attachments. I love that about television. It’s part of the reason why I wanted to become a television writer. I think Altered Carbon asks some things that are challenging. On the one hand, OK, you love Takeshi Kovacs. You loved Joel Kinnaman. Now, this season, it’s Anthony Mackie. There’s a transfer where a new actor has to embody the same character.

The questions the show is asking — what makes you you, what’s the relationship between your mind and your body, what exists of you over time — it’s almost demonstrating that right in front of your eyes through Kovacs, season to season. I think by going on that journey, you’re actually living the question on a very visceral level. You go, “Wait, that’s not my Kovacs.” But then maybe you develop an attachment to Kovacs by Anthony Mackie. And if we do our jobs right, and we get to have Kovacs played by another actor and then another actor and then another actor… what makes this character Takeshi Kovacs? What makes a person a person? How much of us is our body, and how much of us is our soul and our actions and our choices and what we’ve lived through? I hope the show demonstrates those ideas. It’s not just about comparing actor performances, although that’s fun. I think Joel is amazing. Anthony is amazing. I could not be more thrilled. But on a structural level, it’s asking audiences to experience feelings you’re not always feeling when you’re watching television. I think that’s fun and stimulating and exciting.