Roxane Gay and Amber Tamblyn brought their “Feminist AF” reading series back to Vulture Fest in Los Angeles on Friday, where the Django Unchained actress read aloud from her upcoming essay collection Era of Ignition and America Ferrera gave her first live reading of a personal story from her 2018 essay collection, American Like Me.

Gay and Tamblyn, who created the series in 2014, this year invited actress and producer Ferrera (who edited American Like Me: Reflections on Life Between Cultures), poet Ada Limon (this year’s National Book Award finalist for The Carrying and 2015’s Bright Dead Things) and author Carmen Maria Machado (2017’s National Book Award finalist Her Body and Other Parties). Past “Feminist AF” events have spotlighted Rachel McKibbens, Attica Locke, Randa Jarrar, Amy Poehler, Eileen Myles and Lidia Miles, among others.

For her part, Tamblyn recently published her first novel, Any Man, and in 2019 will release Era of Ignition: Coming of Age in a Time of Rage and Revolution, an essay collection about her political awakening. This year Gay has published the memoir Hunger: A Memoir of (My) Body, the short-story collection Difficult Women and the graphic novel Black Panther: The World of Wakanda.

Gay kicked off Sunday’s edition of the series by reminding the room that 110 women had just been elected to Congress in the midterm elections. She then read her story “Be a Good Boy,” from the 2012 collection Their Peculiar Ambitions: Forty-Four Stories About Our Forty-Four Presidents. The story begins with John F. and Jackie Kennedy kissing in the their bedroom in the White House as John ruminates on how the residence doesn’t feel quite like his home. When he tries to initiate sex with Jackie, she tells him, “There, there, Jack, be a good boy”; when he suggests they run away, she repeats the phrase.

Limon followed with several poems, the first, “How to Triumph Like a Girl,” explaining why the narrator enjoys watching female horses. “As if this big / dangerous animal is also a part of me, / that somewhere inside the delicate / skin of my body, there pumps / an 8-pound female horse heart, / giant with power, heavy with blood,” Limon read.

In the Virginia Quarterly Review-published poem “The Vulture and the Body,” a woman notices roadkill on her way to and from fertility appointments, considering, “What if, instead of carrying a child, I am supposed to carry grief?” The poem “Wonder Woman,” from Limon’s 2018 collection The Carrying, saw the poet considering invisible pain, from which she suffers, she told the Vulture Fest audience. Her final poem, “A New National Anthem,” offered a prolonged critique of the song.

Machado shared “The Husband Stitch” from her collection Her Body and Other Parties. The story — whose title refers to the stitch that women sometimes get after childbirth if they have torn the skin between the vagina and the anus during labor — recounted a woman meeting her eventual husband, having a child with him and, eventually, the husband betraying her. “Someone said this is my hit single, so now this is what I like to play when I go onstage,” Machado joked before diving into her story. 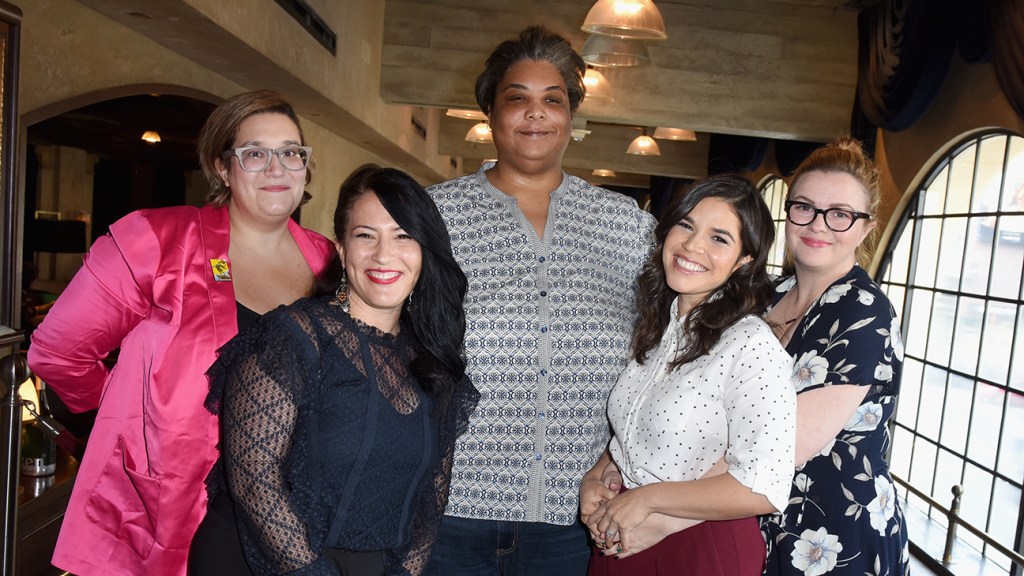 After, Ferrera read her contribution to American Like Me, a story about the actress’ accidental visit to her absent father’s grave on a trip to Honduras. “I’ve never read this out loud so I don’t know what’s going to happen,” Ferrera presaged her performance.

Over the course of the story, Ferrera recalled how her immigrant parents separated when she was little, and how she didn’t understand why her father would move back to Honduras from their home in the U.S. after. “I had come to think of Honduras like the fate I had been spared from,” Ferrera read. As an adult, Ferrera decided to reconnect with her father, but learned just 36 hours after she began writing him a letter that he had died. During a trip to Honduras with a U.S. women-empowerment organization, Ferrera visited his grave and an old woman who helped raise him. “I know I will come back,” the piece concluded.

Tamblyn, the final reader of the afternoon, shared an essay about the 2016 Election Night from her upcoming release Era of Ignition. The essay recalled 2016’s presidential election night, which Tamblyn spent with Ferrera and comedian Amy Schumer in New York’s Javits Center while several months pregnant. She and her friends wore matching white pantsuits to signal their support of Clinton, “looking like the cast of some new primetime medical drama,” Tamblyn joked.

As the night wore on and it became clear that Clinton was facing a steep challenge to the presidency, “I swigged some more Zantac, and my baby shoved her foot into my ribs, as if to foreshadow the paint that was yet to come,” Tamblyn read. Her line “Katy Perry anxiously chewed on a celery stick” drew some laughs. When Clinton’s director of strategic communications informed Javits Center attendees that Clinton would not be speaking, Tamblyn came to a grim conclusion: “A dark realization swallowed me: I was going to bring a baby into this world. And not just any baby: a girl.” Tamblyn recalled imagining if she should give her baby away to Canadians or Swedes.

At a subway station the following day, Tamblyn read, she began experiencing pain and shortness of breath, which caused her collapse on the stairs. She recalled a “homeless man” saying, “Oh shit, it’s going down!” and offering to cut her umbilical cord with beard scissors if she went into labor. Ultimately, Tamblyn learned she was just having a panic attack.

“’How can I keep her safe?’” Tamblyn recalled asking her doctor on a visit about the attack.

The 2018 Vulture Fest in Los Angeles, which this year features speakers including the Dirty John cast, Constance Wu, Nick Kroll, Fred Armisen and others, concluded Sunday.

Roxane Gay on Body Positivity and Her New Pop-Up Magazine