The Walking Dead, the biggest-ish show on TV, returns on Sunday night with its 100th episode and the start of its eighth season. AMC reminded viewers of that with a consumer-oriented email alert on Thursday night, one that doubled as a not-so-subtle jab at a streaming outlet.

This barb did not come out of the blue. AMC was left out of Hulu’s skinny bundle of channels in its new Live TV service that launched in May. There were discussions to include the prestige cable outlet in the package, but neither party is said to have found the suggested partnership financially appealing. It’s also worth noting that Hulu poached one of AMC’s top executives in May. Hulu named longtime AMC and Sundance TV originals president its new chief content officer, as it continues to ramp up originals after the success of Emmy darling The Handmaid’s Tale.

An AMC spokesperson gave The Hollywood Reporter a statement clarifying their motivations on Friday: “We have enormous respect for our partners at Hulu, with whom we share an extensive programming relationship. With an expanding array of providers delivering live television to consumers, we think it’s important to make our fans aware that this season’s The Walking Dead premiere, as well as subsequent episodes, are available everywhere except Hulu.” (When asked for a rebuttal, Hulu had no comment.)

While AMC and other AMC Networks aren’t part of Hulu’s Live TV package, the streamer is not without AMC content. Hulu houses episodes of spinoff Fear the Walking Dead and recently ran Sundance TV critical favorite Top of the Lake: China Girl — already gaining awards buzz after its first outing as an anthology in 2013, one that won a Golden Globe for star (and Hulu frontwoman) Elisabeth Moss.

The Walking Dead, still TV’s highest-rated series among adults 18-49 if you don’t include the gross viewership for pay cable and streamer HBO’s Game of Thrones, returns for a new season after a year that brought all-time highs and some substantial dips. Season seven ultimately averaged 16.4 million viewers, a stunning 10.3 million of them in the key demo of adults 18-49. Still, those represent year-to-year losses of roughly 15 percent on both counts. 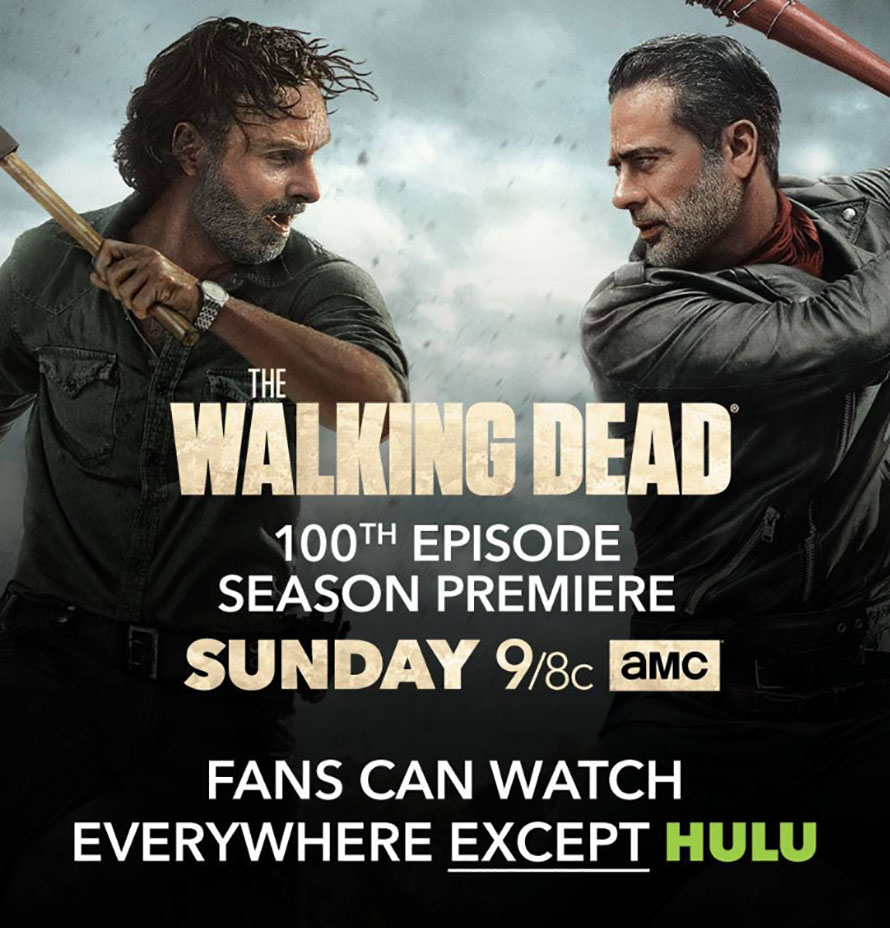