[This story contains spoilers through the third episode of Starz’s American Gods.]

Three episodes into its run, Starz’s American Gods has proven itself a faithful adaptation of the Neil Gaiman novel on which it’s based, presenting scenes straight out of the source material. The third hour, called “Head Full of Snow,” is no exception, including Shadow Moon (Ricky Whittle) and Mr. Wednesday (Ian McShane) pulling off a clever bank robbery, complete with the snowy magic trick from which the episode earns its title.

Then there’s the 10-minute sequence culminating in a literally and figuratively fiery sexual encounter between a young Middle Eastern man named Salim (Omid Abtahi) and a taxi-driving god, which is lifted directly from Gaiman’s text.

The scene begins with Salim, who originally hails from Oman and recently moved to New York City to pursue a new life, experiencing an unsuccessful day in his new job as a salesman. He decides to take a taxi ride back to his hotel, leading to a conversation with his driver (Mousa Kraish), a man who just so happens to be from Oman as well, and indeed is more than just a man: Je is a Jinn, also called an Ifrit, a mythical creature born from fire.

The two forge an immediate emotional connection, and it soon becomes a physical one after Salim invites the Jinn upstairs to his hotel room. In the novel, as they have sex, Salim imagines “the desert on [the Jinn’s] skin,” and the Starz series adapts this passage visually by showing Salim and the Jinn turning into towering creatures in a faraway desert, having sex atop sand dunes, ending with a blazing climax. When Salim wakes up the following morning, the Jinn is gone, his forms of identification and car keys still lingering. Salim takes these possessions as his own, and embarks on a new life as a taxi driver.

In the novel, Salim’s story is one of many that was designed to explore the central theme of immigrating to and finding new life in America, sitting alongside episode two’s Mr. Nancy (Orlando Jones) sequence as well as the series premiere’s violent Viking vignette. For his part, executive producer and co-showrunner Bryan Fuller believes that the Salim and Jinn scene was important to include in his American Gods adaptation for another reason. 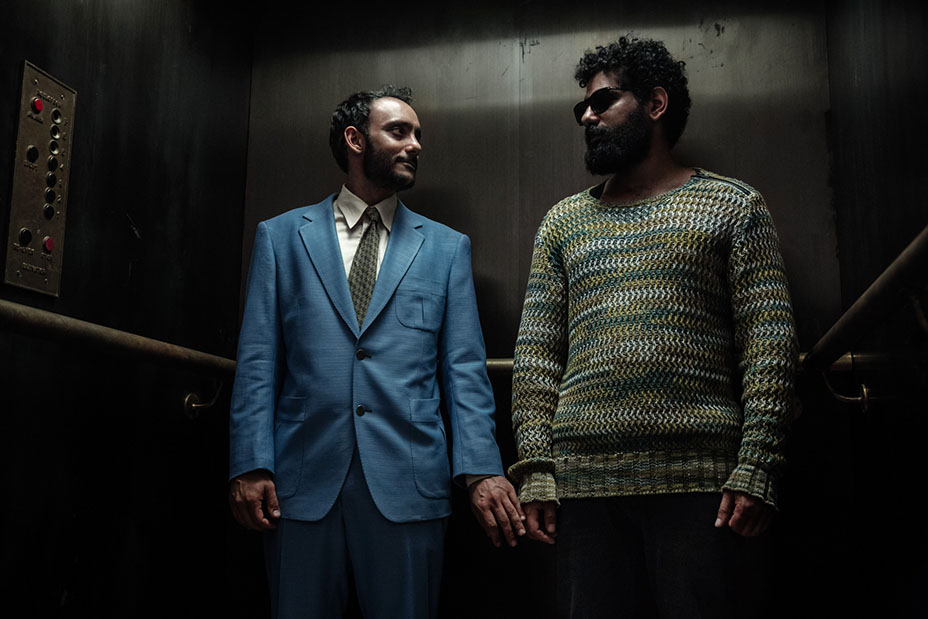 Speaking with THR, Fuller says the sexual content of American Gods is designed to explore “in a sex-positive way the human relationship to our own sexuality” and “what it is to bond and join and physically become one with another human being, and leave our individual sense of self behind and become something greater than what we were before we were penetrating or being penetrated or entwined in whatever respect we were going to be entwined with another.”

In approaching Salim and the Jinn’s sex scene from that very personal perspective, Fuller felt it was important to change one aspect of the encounter from how it was originally written in the book.

“To portray Salim and the Jinn in a way that’s sex positive for a gay man who comes from a country where homosexuality is punishable by death and you can be thrown off of a rooftop,” he explains, “it was very important to us to look at Salim’s story as a gay man from the Middle East whose sexual experience was probably relegated to back alley blowjobs and didn’t have an intimate personal sexual experience. In the book, Salim blows the Jinn in the hotel, and then he’s gone. It was important for us in this depiction to have Salim drop to his knees and prepare to achieve sex the way he’d been accustomed to, and the Jinn lifts him off of his knees and kisses him and treats him much more soulfully and spiritually to change his perception of who he is and what his sexual identity has become. That felt like it was empowering in a different way, showing a protagonist as the one who is being penetrated. That comes with all sorts of preconceptions of gender roles and what it is to be a gay man at the same time.”

“What we wanted to achieve there is for an audience who might not necessarily be accustomed to seeing two men having sex, to recognize it as a beautiful thing,” the writer continues, “as opposed to ‘Ooh, Alec Baldwin is kissing that old man!’ Or, ‘Whoopi Goldberg is touching that woman’s hand, what does it mean?’ I’ve been seated in that audience as a gay person, and resented the cringing and cajoling and jeering of audiences, and wanted to show a Middle Eastern gay kid who might find this [show] somehow and see that scene and realize there are people out there who don’t think he’s an abomination.”

Fuller believes that the violence of American Gods would still be possible if the series was airing on a network, given what NBC allowed him to display in the visceral Hannibal, as an example — but what about the scene between Salim and the Jinn?

“They wouldn’t have let us show penises and acts of sexual content because America has a very f—ked up relationship with sex,” he says. “You can kill somebody, but you can’t make love to them. That’s a greater issue that we won’t be conquering in probably either of our lifetimes.”

Let us know your take on the latest American Gods episode in the comments below, and keep following for more interviews and coverage of the show.