The truth is out there — like, way out there, according to how Gillian Anderson describes the process of becoming David Bowie.

The erstwhile Agent Dana Scully takes on two new familiar faces in the latest episode of Starz’s American Gods. She stars in Bryan Fuller’s and Michael Green’s Neil Gaiman adaptation as Media, a new god created through the worship of — you guessed it — media. Her forms are many, as Anderson repeatedly appears under the guise of different icons from media history. In her first scene onscreen, she came in the form of Lucille Ball, speaking to series protagonist Shadow Moon (Ricky Whittle) through a television set. In this week’s episode, Anderson adds two new roles to the Rolodex: as the aforementioned Bowie, sitting in a limousine and chiding fellow god Technical Boy (Bruce Langley), and later appearing as Marilyn Monroe in full-blown “happy birthday Mr. President” regalia.

Speaking with The Hollywood Reporter, Anderson opens up about the bizarre process of becoming Bowie, why she was more comfortable in Marilyn’s skin, and what it means for a show like American Gods to be airing at this moment in time.

In playing Media, you’re inhabiting the worlds of some truly legendary people. I have to imagine it’s a delicious opportunity for an actor.

It would be enough of a process to fully research one iconic person to the point where you feel comfortable turning them into a character. Here, you’re playing three iconic figures, at least so far. What’s that process like for you?

It all depends on the time frame. I can’t remember…I think it took us two hours to shoot that Bowie scene. I flew in and went to set on the same day, went into hair and makeup, and that in and of itself took a few hours. I had maybe two hours to do that scene, before getting on a flight back to London. So whatever happens prior, in my own world and my own house and my own mind, prior to filming? So much of that is also dependent on what happens when we show up, when you have such restricted time. You’re relying on a crew, you’re relying on a director, you’re relying on so much. The Bowie set was probably about 110 degrees with no air and nobody could get in. They had to tape it up from the outside, and I had a fan hidden behind me. I have to imagine that all of that also contributes to whatever research I may have done, and anything I prepared. Circumstances always have impact on performance. Even though I looked at hours of interviews and footage for each of them, and worked on voice and mannerisms, etcetera, I’m always surprised at what falls away and what stays and what is left once you’re in front of the camera and you’re on a set with people standing around watching, and all of the time constraints, and all of that stuff. It always feels like that crap shoot is part of the process and the final product, as much as anything I may have prepared.

What was your feeling the first time you saw yourself as David Bowie?

The weird thing was that I was wearing a flowery dress that day in the makeup trailer. The first pictures I took of myself in the mirror…the hairpiece was already on, and my response to the makeup guy was like, “Oh, my god, it’s getting close, but I still have this flowery dress on!” The juxtaposition was just a bit disturbing. (Laughs.) There was something about it that was just weird. And then I ended up having some time in my trailer while they were shooting another scene. Time was counting down, and I can’t remember if I was out of the dress yet, but as I was continuing to work, I looked up from the chair and caught myself in the mirror and I had a really strange reaction. I think it’s probably the first time in my life I’ve been dressed as a man, so to speak. It was more to do with that than seeing something that resembled another human being I was familiar with. It was more about gender. All of a sudden, I just did this photo spread — just on my phone, I haven’t sent them to anybody — but I started staring at myself in the mirror and taking pictures of the person I was seeing. It wasn’t necessarily Bowie, but it did not even feel like it was me. I was so focused on this person in the mirror who was not me. It was a very, very curious experiment. It was fascinating. 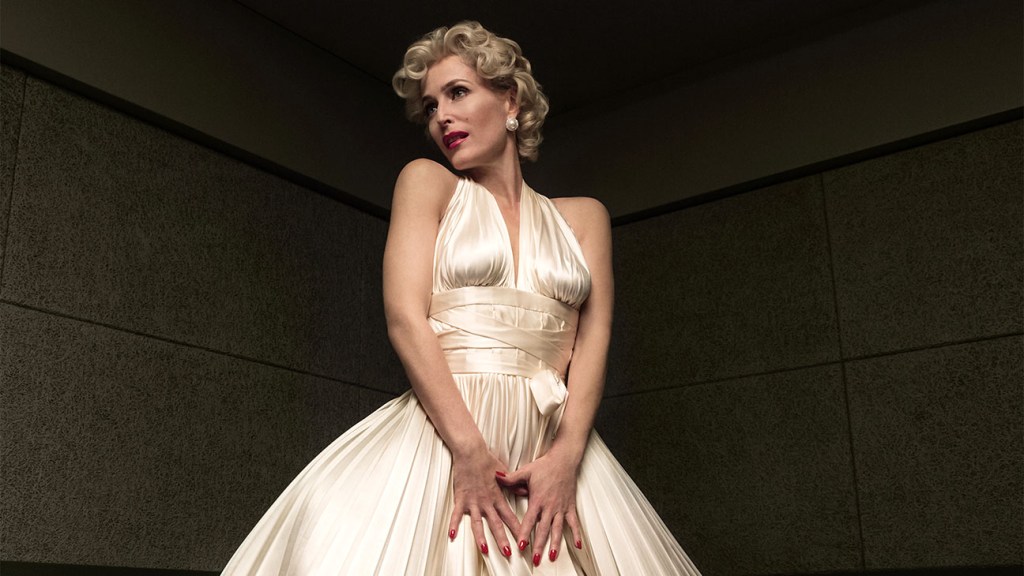 How about seeing yourself as Marilyn Monroe? What was your reaction to that?

I think because I had less fear around it and less judgment of myself over whether I could pull it off with Marilyn…she was just a lot of fun. It was easier to get into her particular tone. It was a lot of fun to play her. There’s a joy that she exudes. It’s part of her persona. There’s a light. That was fun to replicate. It was a very different experience than the intensity that Bowie warranted. It was a very different experience, obviously. And there’s this whole remote-controlled contraption I was standing on when I was Marilyn that was blowing wind up my skirt. I was on that machine for a good half of the scene, and it was taken out in post, but it helped. Someone else was controlling me, making me enter the room and spin around while I was doing my thing. That’s all stuff that’s new information that comes in on the day when you show up to shoot. (Laughs.) She was so much fun to play. It was also fun interacting with more people in the room.

When you’re playing a character like Media, who appears and acts differently every time we see her, is it hard at all to find a through line? How do you ground the character?

Media has an intention and a darkness to her, that doesn’t necessarily show up in the other characters. There’s a throughline of that that seeps through sometimes. But aside from that throughline, it’s whatever it is that continues to be familiar about me, in a sense. I think probably the easiest grounding point is the element that’s recognizable in me and myself. I don’t know necessarily what that is.

American Gods explores themes of immigration and the power of belief. What do you see as the impact and importance of a show like this in the context of our world today?

I mean, there’s something anarchic about it. I think that’s a little bit how people are feeling right now. There’s so much uncertainty, a feeling that nobody quite knows what the future holds, what their lives will entail, what is real and what is not real, what is fake and what is to be relied upon, and this world of these old and new gods speaks to that. There’s something very anti-establishment and politically punk rock about the whole thing that’s appealing to a populace that doesn’t know what the f— is going on. (Laughs.) That’s what I would say.

Watch Anderson’s turn as Marilyn Monroe in the following clip.

What did you think of Anderson’s Media transformation? Sound off in the comments below.