“There are those who will see the first four episodes and say we were being true to the book — and then we threw it in the trash for a little while.”

That’s how executive producer Michael Green assesses the possible backlash to the latest episode of American Gods, the moody fantasy epic based on Neil Gaiman’s novel of the same name. Green, who oversees the series alongside fellow executive producer Bryan Fuller, is referring to the fourth episode’s focus on Laura Moon (Emily Browning), whose death in the premiere episode pushed protagonist Shadow (Ricky Whittle) into the middle of an underground war between gods.

In both the book and the series, Laura’s death is just the beginning of a new life, as she miraculously returns from the grave with an eye toward reconciling with her estranged husband. Laura has a lot of explaining to do, of course, apart from the obvious question of how she’s still alive-ish: Shortly after her death, Shadow learns that Laura was sleeping with his best friend Robbie (Dane Cook) over the past several years, a devastating blow on a few different levels.

Through three episodes, American Gods has proven almost slavish in its adherence to Gaiman’s text, bringing life to stories and scenes that other adaptations may have left behind. (Here’s looking at you, Bilquis and Salim.) Episode four marks a divergence from that approach, as it focuses entirely on Laura and the life she lived leading up to her death.

The episode, structured as a flashback, reveals how Laura and Shadow first met. She was a card dealer at a casino, where Shadow was attempting to pull off small cons, while Laura was simply struggling to survive a depressing day-to-day existence. Despite finding each other, Laura remained empty, flirting with suicide at points, eventually resorting to drastic action to finally find feeling: asking Shadow to join her on a mission to rob the casino. After the plan’s failure, Shadow gets sent to jail, leaving Laura alone yet again. In her solitude, Laura seeks emotional and physical comfort in Robbie, carrying on an affair while Shadow remains behind bars.

During their final night together before Shadow returns from prison, Laura and Robbie have one last sexual tryst, leading to the horrific car crash that takes both of their lives. From there, Laura travels to the great beyond and back again, cheating death. When she returns to the mortal realm, it’s with a renewed strength, literally — in the sense that she’s so strong she can kick people’s spines clean out of their bodies. (Indeed, an extravagant action scene reveals that Laura is the one who saved Shadow when he was hanged by the neck in the series premiere.) She also finds that her love for Shadow has been renewed, as he becomes the only sense of warmth and feeling in her cold and dead world — hence he’s found her sitting at the edge of his motel room bed. To be continued on that front.

While Laura served an important role in the book on which American Gods is based, it was on the fringe of the main narrative, rather than in the thick of things. With “Git Gone,” Green and Fuller created all-new scenes and stories built around Laura, which might feel familiar to book readers, even if they’re entirely unique to the Starz series.

“We took a character who didn’t have nearly the same screen time as Shadow and Wednesday did [in the novel], but certainly captured our hearts and imagination,” says Green. “We wanted to make her a co-lead when people thought they figured this show out and who they knew it was going to center on. Then comes an episode to people who might not have read the book and might have thought was in there. Perhaps an even bigger compliment would be, people who have read the book might go back and think, ‘Wasn’t that in there?’ For anyone who has read it in the last six months, they’ll know it wasn’t. But if it’s been 18 months or more since you read the book? That would be a compliment.”

For even more on the episode, read on for what Emily Browning tells THR about playing Laura Moon. 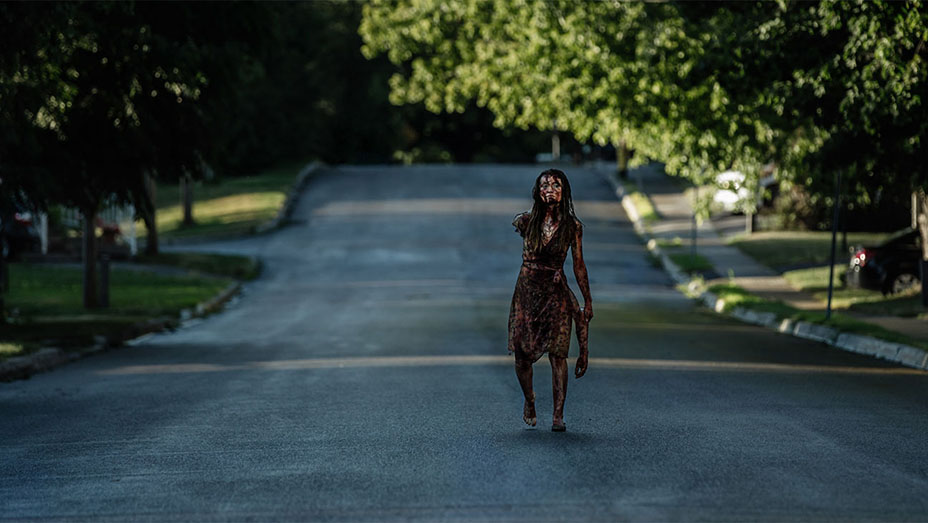 How do you describe Laura Moon?

She’s not a god. A few people have referred to her as a zombie. We never called her that. There’s a line later in the season when somebody asks: “What are you?” And she says, “I’m an abomination.” That kind of sums it up for me.

She might have even used that word to describe herself before her death, given what we learn about her state of being in this flashback episode.

I’d say so! (Laughs.) Or other people may have said that word about her, but it’s something afterwards that she realizes she’s dealing with. Obviously the character in the book is very cool, but she only exists in relation to Shadow. What I loved about this series is that we get to delve into Laura’s backstory and learn a little bit about her. She does a lot of morally questionable things. I don’t think learning about her history necessarily justifies those things …

But it adds context.

Yeah. It helps people to empathize with her to a degree. I think when we meet her, she’s lost and confused and doesn’t really understand what she wants out of life. She just knows she doesn’t want the life that she has. She’s interesting. She’s a tricky character. She’s very crass and kind of out there. But she’s also unapologetic, which is really, really fun. As someone who is a people pleaser, to play a character who just really doesn’t give a shit of what anyone thinks of them? That’s really satisfying.

'American Gods': Everything to Know about the Starz Drama

This episode is all Laura, all the time. It must have been an incredible way to get to know this character.

Absolutely. I was so lucky that our director on that episode was Craig Zobel, who I completely fell in love with while we were working together. He’s the coolest guy ever. He was pushing me to go deep with her. We had so many discussions about her. He came on board and was like, “I’m the least technically savvy director among this group, and I’m nervous,” but I think that was important for that episode, because it’s the least spectacular episode and the most human story. So that was super important: We have to keep the viewers’ attention after these amazing first three episodes. We needed to keep people interested in essentially the story of — the first half, at least — the story of a girl and her mundane existence.

And she’s somebody who is already submerged in darkness, before she’s literally condemned to darkness. That’s where she lives, even before she dies.

Yeah, if anything, I think it was Bryan or Michael who originally said this: Dying is the best thing that’s ever happened to Laura. I think that’s true. It frees her completely. There’s nothing to be afraid of. Laura is not an outwardly fearful person. I think all of that malaise, or whatever it is, that feeling of, “I’m not sad, but I’m not happy. I don’t know what I want.” That kind of frustration that’s bubbling under the surface … it comes essentially from a fear of wasting your life. The fact that she dies and comes back and goes, “Oh! So death is not an issue for me, I suppose.” She’s completely free of all of that fear. It doesn’t make her a better person in any way. If anything she becomes more Laura-ish. (Laughs.) Once she meets Mad Sweeney [in episode five], they were the most fun scenes for me to film, because they hate each other. They’re truly awful to one another. And it’s fantastic! It’s so much fun. But she finally has a purpose. She realizes she didn’t appreciate this unconditional love Shadow had given her in her life, and she realizes that that’s what she cares about most and what she wants. She has a drive. Failure is not an option.

Inside the Vast and Violent 'American Gods' Premiere

This is a remarkably violent show when it wants to be. Laura kicks someone’s spine clean out of their body in this episode, for instance. Does the content of the show ever give you any pause? In the sense of, “How are we pulling this off?”

I honestly never really thought about it. I think we’re so saturated with violence anyway. We’ve been having this conversation in relation to the fact that people seem more concerned with sex and nudity than they are with violence, that you’ll get a higher rating if you have more nudity, which is just bizarre to me. I have more of a problem with violence, obviously. Bryan and I were just having this conversation about how we all need to accept that every single human being is beautiful and every single human being is disgusting. We’re all very gross. Bryan comes at it from this [perspective], maybe not as a surgeon, but what makes people up. … Obviously, if you have seen Hannibal, you know it’s something he’s interested in, and I’m fascinated in it as well. I don’t see it as gore porn. I don’t see it as gratuitous in that sense. I just think it’s a fascinating thing for us to explore. It’s kind of campy sometimes.

When I first got to set the day we were filming Laura’s big fight scene [in episode four], I arrived to rehearse some of that fight. The first thing I saw was Ricky’s stunt double, so he was far away enough that it could have been Ricky. He was in Shadow’s clothes and everything. I saw him hanging from the tree. It shook me up so much. I was like, “OK, we’re doing this. This is really a lot.” It made me very emotional. But it also made me think: “OK, as a viewer, stepping back, the guys who did this to him? I want to see them torn to f—ing pieces.”

They deserve to get their spines kicked out.

Exactly! That’s what I want to see. They’re weird and faceless. That scene felt incredibly satisfying to me, because there’s really a reason for it. When I watched that scene in episode one [where Technical Boy tasks his cronies with hanging Shadow to death], I watched it with an audience, and I was blown away by the scene. And the moment Shadow gets hanged, you could feel everyone in the room tense up and go, “Whoa.” There was a part of me when I was watching it — when the rope breaks, I just wanted to shout out to everyone: “It was me!” (Laughs.) That’s sort of redemptive for Laura. She did not appreciate Shadow. She didn’t love him, not really. She thought she did, but not really. But suddenly something changes, and it’s the moment she sees him hanging there, essentially. She’s like, “Oh my god. I love this person. I need to save him.” And if that means ripping a guy’s spine out? Sure. I think that’s great.

What did you think of Browning’s breakout episode? Let us know in the comments below, and keep following for more coverage of American Gods.