The first moment of American Horror Story: Cult is chill-inducing.

“I am running for president of the United States!” announces Donald Trump.

“I am running for president of the United States!” echoes Hillary Clinton.

No matter what side of the aisle, the flashback footage of the actual 2016 presidential campaign is an eerie place-setter, a reminder of how far away that moment in history feels in today’s divided America.

As promised, the seventh season of Ryan Murphy and Brad Falchuck’s FX anthology series kicks off with a minute-long ramp-up to 2016 election night. Using real footage of then-candidates Trump and Clinton, highlights down memory lane include mentions of Trump’s wall, Clinton’s emails and a growing “palpable fear” as protestors on both sides clash. “I could stand in the middle of Fifth Avenue and shoot somebody and I wouldn’t lose any voters, OK? It’s like incredible,” Trump says. The statement, so attacked at the time, now serves as a reminder that hindsight is 20-20.

Kai Anderson (Evan Peters) is sitting on the edge of his basement couch listening to Fox News as the chuckling anchors declare Trump the 45th president of the United States, winner of the most “unreal” and “surreal” election America has ever seen.

“The revolution has begun,” Kai says softly. He then humps his big-screen TV, his blue hair thrusting in the air. “Fuck you world!” he screams before chanting “USA! USA!” 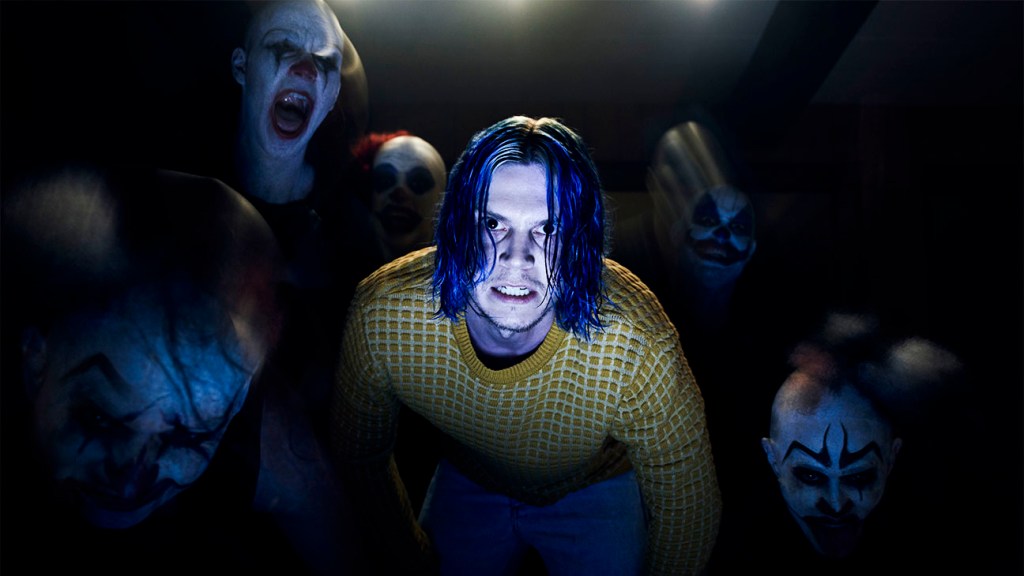 Over at the Mayfair-Richards’ house, Ally (Sarah Paulson), her wife, Ivy (Alison Pill), young son Oz and their liberal-leaning friends are holding out hope, glued to MSNBC. “I won’t believe anything until I hear Rachel Maddow say it, she’s the only one I trust,” says Ally before Pennsylvania is called. “It’s the politics of fear, it always works,” says her stunned friend, the Asian-American head council member in the show’s Michigan-set town, population 10,000.

When MSNBC announces Clinton’s concession phone call, Ally watches with tears in her eyes as Trump takes the stage, horror music at full swell. “Go to hell Huffington Post! Fuck you Nate Silver!” screams Ally as she falls, debilitated, to her knees. “Oh God, how could they have been so wrong about this!” 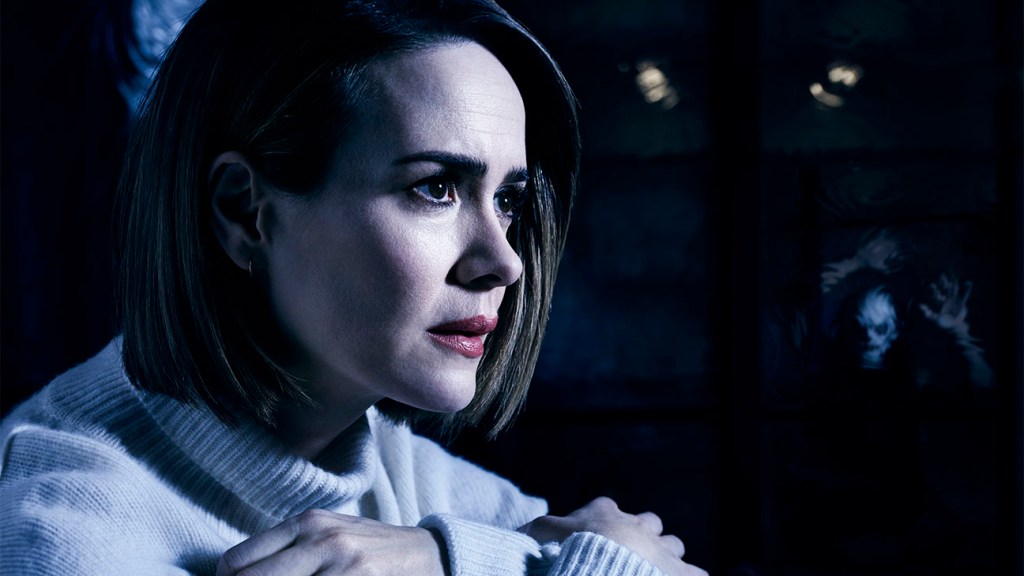 Later, it will be revealed that much to Ivy’s dismay, Ally quietly voted for Stein — Murphy shining his season-seven spotlight on one parcel of American voters forced to face their own complicity in the election results. The council member also screams at his wife for not voting: “Look at our friends on the couch and tell them that they might not be able to maintain their rights as a married couple because you were too busy playing on Etsy to go vote!”

Kai, meanwhile, is busy mashing up bags of Cheetos in a blender, using the crumbs as orange makeup while he practices his “yuge” impression of Trump in the mirror. His sister, Winter Anderson (Billie Lourd), devoted her college semester to campaigning for Clinton. “She was supposed to win, is this really happening?” the depressed coed tells a friend before being interrupted by Kai. He then asks her to link pinky fingers. “I’m just so scared now,” she says. “Everyone is,” he replies with a smile.

Then comes the opening-credits sequence — the mashup of phobias, Trump and Clinton masks and the franchise’s theme song with a patriotic twist ends with two hands, pinky-swearing, in handcuffs — and Cult truly begins.

“How the show begins on election night, pro or con, I think everybody can relate to the feeling of that evening, and that was the launch of the season,” showrunner Murphy said at a recent press event, attended by The Hollywood Reporter. On Sept. 1, when Clinton was the presumed winner, Murphy decided to use the election as a jumping-off point to explore how the cult of personality and leaders such as Charles Manson rise up within a disenfranchised community. After Trump’s stunning win, when Murphy and his writers began to plot the season in December, they changed the opening scene. “It was very easily switched because pro or con, either candidate, Evan’s character, who plays somebody who rises up because of anger in our country, was always the same.”

'American Horror Story: Cult' Isn't Only for a Liberal Audience

Murphy went on to explain that despite what many people may think — including the show’s conservative fans who have tweeted at Murphy that they plan to quit watching — Cult is not about Trump, or Clinton.

One thing the season is about is a “growing sense of anxiety in our culture,” something Murphy explores through Ally’s range of irrational phobias, which are re-triggered after the traumatic election night similar to when she was nearly crippled by her anxieties after 9/11. She has a fear of clowns — triggered by her son reading a Twisty the Clown comic book — blood, holes and confined spaces, to name a few. Later in the episode, when Oz sees a gaggle of clowns murdering their neighbors, the council leader (Tim Kang) and his wife, it’s unclear if he suffers from the same phobias as his mother, or if a Purge-inspired gang of killers is truly on the loose in this idyllic suburb. [At the end of the episode, Ivy reveals the name of their neighbors to be the Changs. Roanoke viewers will remember the Chang family — providing an Easter egg and perhaps the second clue, in addition to Freak Show‘s Twisty cameo, that Cult is indeed within the AHS universe.]

“One of the things that I personally experienced after this election was a wild increase in my life in anxiety,” said Murphy. “I think a lot of people can relate to that, no matter what side you’re on, because there seemed to be such a painful discourse going on, and everything seemed to be at Mach 4 level. You could feel it in the news. You can feel it now when you watch it. We’re on the brink of nuclear war one week, and then, the next week we’re on to something else equally extreme. I want to lean into the escalation of fear in our culture.”

What to Expect From 'American Horror Story: Cult' as It Shifts Away From the Election

That escalation is embodied in Kai, who delivers a verbose speech to his town’s council on why fear and chaos should reign. His interpretation is deemed delusional by the council. “I’m glad you 4Chan guys feel empowered to join the rest of us in civil society now that Papa Bear Trump is telling you it’s OK,” says that same councilmen from Ally’s and Ivy’s house, laughing at Kai’s emergence from his “parent’s basement.” But Kai has indeed tapped into the pervading fear surrounding them. He baits a group of Mexicans into beating him up, so he can use the scenario to his own political advantage. And he throws a drink on the lesbian couple he encounters on the street, Ally and Ivy.

As the restaurant owners and their white privilege become a target of Murphy’s satire, they also represent the Americans who long for the days of President Barack Obama. “For the first time I was included in the discussion, in the world,” Ally tells her shrink, played by Cheyenne Jackson.

“Our feeling is that everybody lost their shit after the election — Republican or Democrat — and everybody’s still losing their shit, and nobody’s really figured out from either side where to put those feelings,” Murphy explained. “[This season] is about somebody who has the wherewithal to put their finger up in the wind and see that that’s what’s happening and is using that to rise up and form power. Using people’s vulnerabilities about how they’re afraid and they don’t know where to turn, and they feel like the world is on fire.”

Though the season has plenty of satire on both sides — “I think that we’ve been very careful to be fair,” said Murphy, who laughed at Ally fighting her clown demons with bottles of rosé — the showrunner said he wanted Kai’s Cheetos-happy reaction to the election to represent the blindness many in this country had leading up to Trump’s election. (And yes, those were real Cheetos.)

“Evan really put real Cheetos on his face, but it was also meant to be a little bit deeper,” Murphy explained. “The idea that you can make fun of Trump all that you want to, and you can claim that he’s absolutely a ridiculous figure, which many people do, but there is some anger in the country and passion in the country that he has tapped into that elevates him from a cartoon figure to someone to be taken seriously, in my book.”

That anger and how it has the power to manipulate is truly what the season is all about.

“Evan’s character was making that statement and rubbing it into Billie Lourd’s face, that she really was looking in the wrong direction,” he explained. “You felt it leading up to the election with all the liberal news. The laughter and cackling that all of the liberal news shows would have about that group of people in our culture, making fun of them, talking about then in a negative way, which led to the shock of, ‘Oh, they haven’t been taking these people seriously. They’re not jokes. There’s something go on there.’ That’s what that scene is about.”

The premiere sets the stage for Ally and Kai to again cross paths, as the couple hires Winter as a nanny for Oz. Winter and Kai will also continue to reveal themselves in mysterious ways, but after screening the first three episodes, it’s unclear how the characters will seemingly be joining Kai’s yet-to-be-revealed cult.

Throughout the season, Peters will portray six different cult leaders through flashbacks, including Manson, David Koresh, Jim Jones and even Andy Warhol. And Trump supporter Kai elevates himself from running for city council to running for the Senate. “I think he’s really a young genius,” said Murphy. “He has really taken the part seriously, and done a lot of research about cults and the rise of fascism, and what does that take, and how do you speak to crowds, and how do you manipulate people?”

'American Horror Story': Here Is How 'Roanoke' Connected All the 'AHS' Seasons

'American Horror Story: Cult' Isn't Only for a Liberal Audience