American Horror Story: Cult has been unlocking weekly hints about its upcoming seventh season, all leading to a big reveal of the season trailer (above).

For those who were in the dark, the FX anthology series launched another unique marketing campaign in the weeks leading up to the debut of Ryan Murphy’s next horror creation. This time around, the minds behind AHS concocted an interactive, multiplatform journey that has been dropping news and clues about the Cult at the center of the election-themed season over the course of six weeks, all in anticipation to the show’s Sept. 5 premiere.

“This provides us the opportunity to do something different and to have a longform engagement with the viewers as we take them through this experience to premiere,” Jason Phipps, FX senior vp digital media marketing, told THR. Unlike last season, where the title, theme and cast of the sixth cycle were kept a secret until premiere night, viewers will know more and more of what this season is all about as the days unfold. “We really wanted to provide a community and reward the AHS audience for their fandom.”

Viewers who have been playing along have used the show’s website, AHSCult.com, as the “hub” for information and signed up to receive their very own cult identification number. Throughout the six weeks, clues have come in the form of chats via Facebook Messenger, on the show’s social media platforms and through real-life activations, similar to the title reveal at Comic-Con. Now that the six weeks have wrapped, the network might continue to unveil tidbits through the show’s premiere.

The Hollywood Reporter joined the Cult and has been updating this story as new clues “unlocked” each week. Follow along below and head here for more information on what the AHS team has in store.

CULT ID NO. 1438: It’s official, THR has joined the Cult. Initiation week serves as an invitation to “join us” and, in typical Murphy fashion, the courtship seems to be defined by a less-is-more approach. Creating intrigue and playing to viewers’ curiosity, the cult signup is marked official after a variation of a brief chat with one of the cult leaders — as the group is only speaking in the royal “we” for now.

“You were afraid. We are here to remove that fear. We are here to free you,” reads the welcome message via Facebook’s messenger app — similar to the first official promo. Encouraged to ask only one question, their answer to what this is all about remains vague: “You will learn. Now is time to commit. You will be contacted again.” 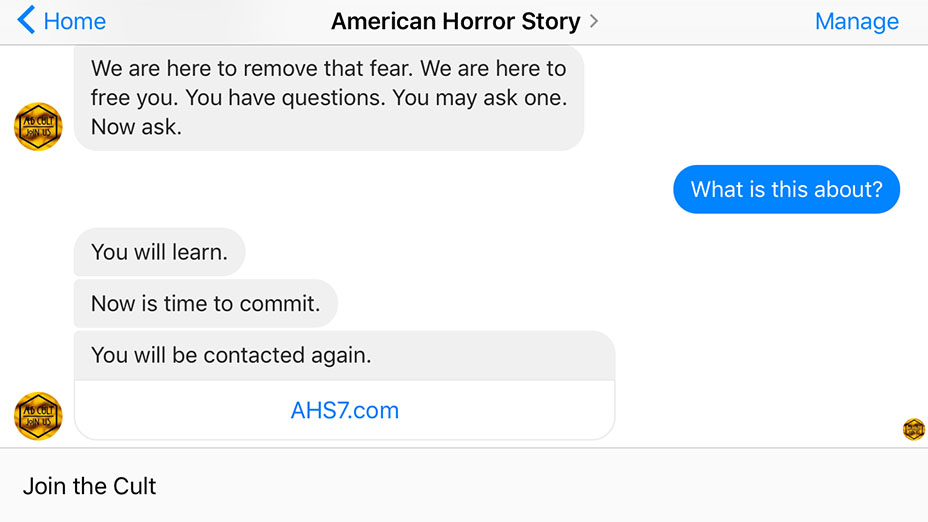 What is known about the 11-episode season is that it will be set in Michigan and that the Trump-Clinton election will be used as a jumping point for a season that plans to highlight “people who don’t have a voice in our culture,” Murphy told THR. Adding, “People who are ignored by the current administration and who are afraid and feel terrorized that their lives are going to be taken away.” Week one provides a first look at those who have felt ignored.

Sometime after the trailer dropped, the AHSCult.com website appeared to be having “technical difficulties.” As of Friday, the site directs to an animated error page that reads “Error 404: This page cannot be found” with a short clip of Peters’ character Kai staring directly into the camera as it zooms in, and finally settles on one of his eyes. The landing page and the links to the different weeks of clues are also gone from the website.