The chaos has won.

It’s the end of the world, but that’s just the beginning on American Horror Story. The eighth season of Ryan Murphy and Brad Falchuk’s horror anthology firmly established a new world with the launch of Apocalypse on Wednesday night.

Though the season arrived with much anticipation — the cycle features the long-promised crossover of earlier seasons Murder House and Coven — it also debuted with much secrecy. Aside from a trailer and brief character descriptions (the episode was not screened ahead of time for press), many questions begged answers from episode one, namely: How exactly will the show’s inner mythology play into the Apocalypse theme?

The setting for Apocalypse is Outpost Three, one of 10 underground havens for the lucky chosen ones — either rich or hand-selected — who survived a catastrophic ballistic missile attack. The fallout shelter, located on the West Coast, was a former boys school that was co-opted by a group called The Cooperative in order to prepare for the attack. The cost of admission: $100 million per slot.

The house is run by Wilhemina Venable, one of the three characters Sarah Paulson will play this season, and functions as a class system with three rules: address her only as Ms. Venable; there is no going outside or reentry, due to radiation contamination; and no unauthorized copulation. Anyone who disobeys is punished or even shot in the head, The Handmaid’s Tale-style.

There are “the Grays,” the workers of the outpost, and “the Purples,” those who were chosen to join. The Cooperative is a “collection of a dozen of the greatest minds mankind has to offer, the visionaries,” Venable tells two Purples, Timothy Campbell (Kyle Allen) and Emily (Ash Santos), who were selected because their genetic makeup made them prime candidates to survive the blast. “It may seem to you a regression, but you’d be dead wrong,” Venable notes of the outpost, which she says is a place where “natural order will restore itself.”

“Technology is what destroyed the world. Social media gave people the illusion they were equal, but that’s all been swept away,” she says.

“It’s all gone. Everything,” Timothy tells the group about the outside world. Outpost Three has enough nutrition to last 18 months and an update from their surviving allies appears to put Venable and Mead on edge. There are no more governments, only rotting mounds of corpses; three outposts have been overrun and, according to the message from a carrier pigeon, the residents of Outpost Three are among the “last vestiges of civilized life on the planet.”

It is later revealed, however, that Ms. Venable and Ms. Mead have been planning a coup. They are playing by their own rules and abandoning The Cooperative. They even killed one guest (Stew) for sport and fed him to the group — as stew. “Strangely satisfying isn’t it, dispensing punishment? I’m not embarrassed to say, it gives me a tingle,” Venable tells Mead.

'American Horror Story': All the Details About the 'Murder House'-'Coven' Crossover Season

Flash-forward to 18 months later, the guests are living on a loop of the same food rations and music inside, still safe from the nuclear winter but tortured by the house rules. Timothy and Emily have fallen in love and are doling out one kiss a week, and the meals have been cut back to one a day.

But just as the house is about to uprise, a key character from AHS lore makes his entrance.

Michael Langdon (Cody Fern), the satanic baby from season one’s Murder House, is now all grown-up. “Eyes like his Dad … Hair like his Mom,” Murphy tweeted in real time about the promised arrival of Michael, whose biological parents are Vivien Harmon (Connie Britton) and Tate Langdon, aka Rubber Man (Peters). Michael was placed in the custody of his grandmother, Constance Langdon (Jessica Lange), after his mother’s death at the end of Murder House. (Tate was already dead.)

During a face-off with Ms. Venable, Michael tells her that three more outposts have been overrun and the remaining three won’t last through the year. He has arrived to evaluate the guests of Outpost Three and select those most worthy of survival. The ones he picks will go with him to another facility, a sanctuary that has enough supplies to last a decade. The season synopsis identifies Michael as a Cooperative representative who is “determined to save society with a secret paradise” and who throws their order into chaos. 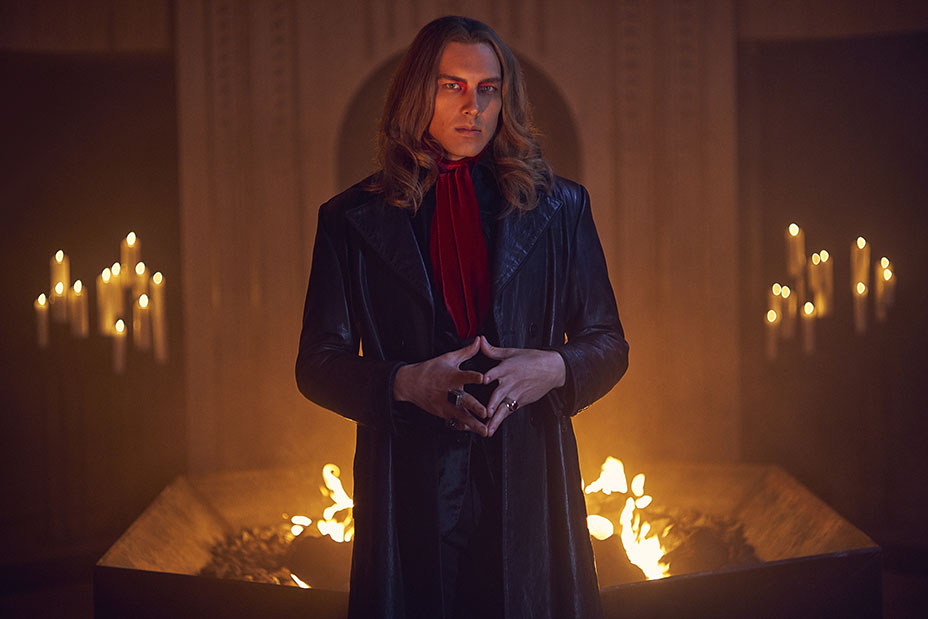 The end of the world was a prophesy made during Murder House when Michael was named the Antichrist. Michael was conceived by a human (Vivien) and spirit (Tate), such a child that medium Billie Dean Howard (played by Paulson) had warned would “usher in the end of times.” It is presumed that Michael has come into his own as the Antichrist and it remains to be seen what role he played in the end of the world.

The premiere episode ended without any mention of the Coven witches. but the trailer for episode two may herald their arrival, along with Murder House‘s Rubber Man (watch that, below). But a mysterious “666” and ghostly voice that briefly haunted Timothy was the first signal that other spirits exist in the outpost. Another clue that more will be revealed about the blast arrived early in the episode, when the anchor on the local Los Angeles news said, “I can’t believe we actually did it,” when telling viewers that a bomb was about to hit the city.

What did you think of the premiere? Sound off in the comments below and bookmark THR.com/AHS for weekly show coverage as American Horror Story: Apocalypse airs Wednesdays on FX.