Continue to The Hollywood Reporter SKIP AD
You will be redirected back to your article in seconds
Skip to main content
April 7, 2017 9:00am
Logo text

Amazon’s new docuseries, American Playboy: The Hugh Hefner Story, dives into the ups (and occasional downs) of the self-made millionaire and Playboy founder.

With the use of archived footage, interviews and reenactments where Hefner is played by New Zealand actor Matt Whelan, the project attempts to pull the curtain back on Hefner’s life and how he turned a $600 personal investment into the Playboy brand.

The 10-episode series comes from the Playboy-owned production company Alta Loma Entertainment, which means exec producers Peter Jaysen and Stephen David had unfiltered access to Hefner, including 20,000 hours of footage from his life. Among other topics, the series explores his relationship to Martin Luther King Jr. (who wrote for the magazine), how Marilyn Monroe became the first-ever cover girl, as well as darker moments like his past struggle with drug addiction.

As Hefner’s son and Playboy chief creative officer Cooper Hefner tells it, in order for these stories to be told authentically, they needed to be approved by one person: Hugh himself.

“His notes would say, “This didn’t happen like this!” It was the strangest details that he remembered,” Cooper tells The Hollywood Reporter.

Speaking with THR, Cooper discussed the series, what’s holding up a Hugh Hefner biopic and Playboy’s “evolving” brand (and why going non-nude was a bust).

How involved were you with producing the docuseries?

We produced it with Amazon. The company that we own is called Alta Loma, which is essentially responsible for adapting short stories at the mag as well as identifying opportunities to tell our brand stories. If you think about The Girls Next Door, The House Bunny, The Hurt Locker was actually a short story that was in the magazine that we were responsible for adapting into a feature film. It really comes from my dad having a love for film and television. For American Playboy, it’s really a 10-hour show about the creation of the company from start to finish.

What was the decision-making behind having this go to Amazon?

The reason why we chose Amazon is because it allows us to tell a story that isn’t safe for work. When one thinks about where the Playboy brand belongs, it is not on a safe for work space. If I were to say what would be our ideal partners, Amazon, HBO, Showtime [and] Netflix would be at the top of our list because [they] can tell the story properly. Ultimately, our brand exists in an adult space.

What might surprise viewers about some of the stories about your father and the brand?

The sheer luck of it all. My dad had a fantastic idea and put everything together, but the most successful people are in the right places at the right times. One of the reasons why I really love the show is it doesn’t just tell the story about sex. It really tells this story of the fight for civil rights and sexual freedoms and, really from a storytelling point of view, communicates everything that my dad fought for. A lot of that is not spoken about today and a lot of that really hasn’t been a focal point for what media outlets have communicated. The fact that the show focuses on the founding of the company and the civil rights fight has a connection to what’s happening in pop culture and politics today. I’m 24 years old and there’s no doubt in my mind that there’s a lot to the Playboy story that a lot of people who are my age do not know.

What demographic do you think the show will attract?

As a fellow millennial, I always make the joke that we’re the first generation that doesn’t have an identity. Whether it’s fashion or lifestyle or music, all these different things that make us who we are are plucked from previous generations. When it comes to politics, we’re very progressive. When it comes to tech, we’re interested in technology that has never been seen before. But other than that, we’re really pulling these pieces from the past. Here we have 63 years of history that people our age are fascinated with. It’s about making sure we’re telling that story. Bridging the past and present is something we think about everyday. This show is an example of that.

Did you personally have objections about what to include in the series?

I provided a tremendous amount of notes to the production team. But really it was my dad. I’m a part of the story, but it’s my dad’s story. I didn’t feel like it was my job to step in and guide him in any way. The script would come from our production team and Stephen David and then get to my dad and there would be just a handful of notes that were scribbled on the draft of the script.

His notes would say, “This didn’t happen like this!” It was the strangest details that he remembered. There was a moment sometime in the mid-’60s where my dad is talking to somebody who wants to be a playmate and one of his notes about the scene was, “She was wearing a cast in this scene! She was wearing a cast on this day in 1964.” For me, I’m sitting here thinking “Well, come on dad, what are you going to say? Do you want them to re-shoot it? Do you want to make a big deal about it?” (Laughs.) When you think about it, it’s his story. If one is in a position where their life is being told and they are a part of the team that’s telling the story, a person has every right to be as specific as they want to be. 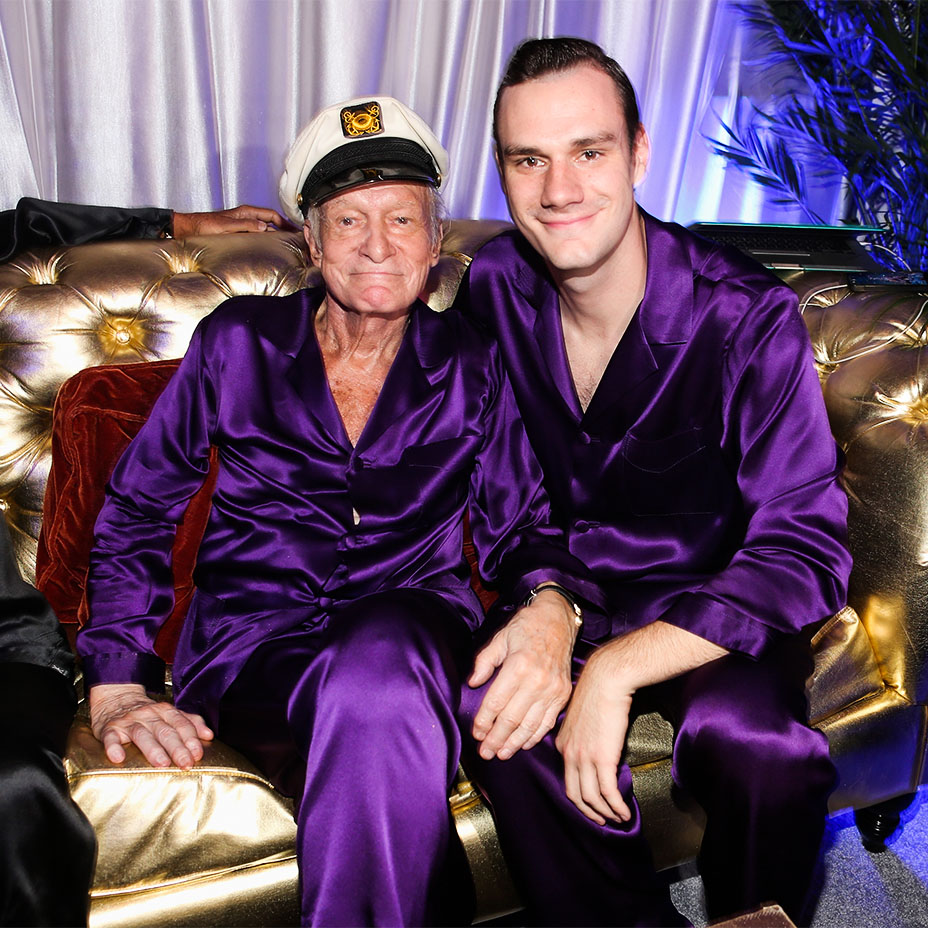 What is his take on how the series turned out?

He could not be happier. We watched the first episodes together and he watched the other episodes following. It’s reenacted pieces of his life with documentary-style interviews. The actual storytelling process is very different than anything that he’s ever done from a documentary and storytelling point of view on his life and the brand.

Did your dad have any notes on the actor Matt Whelan playing him in the reenactments?

They met each other. My dad was a part of the casting process. When my dad saw the first cuts, he said that it was like watching himself. It was a moment where the actor who’s playing my dad felt that that was a nice remark. 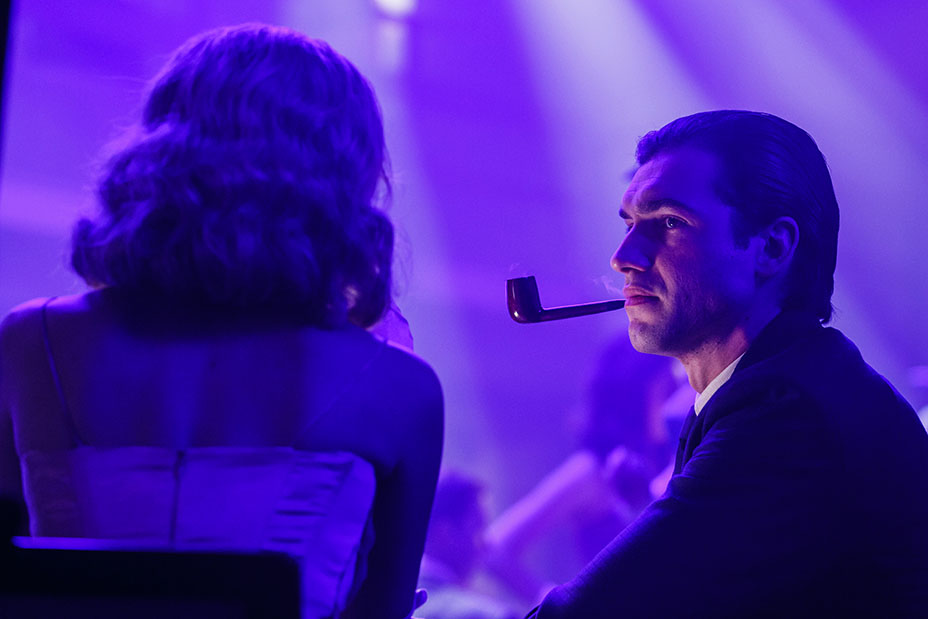 In the marketing and promos for the series, your dad is teased as this real-life James Bond. What parallels do you see between the two?

(Laughs.) I understand why people draw the comparison. You can say, “Why the hell is Hugh Hefner compared to James Bond? He’s not running around with a gun and he’s not a secret agent.” But when you think about what the Playboy philosophy really is it was the argument that sex can be paired with sophistication. In society, we have the point of view that sex and intellect and a sophisticated lifestyle has to be separated from this dirty act. In a lot of ways, that’s sort of the same narrative that James Bond has. That’s why Bond and [creator] Ian Fleming and that story paired so well with Playboy because it was the same story that my dad was conveying. He wasn’t armed with a pistol and he wasn’t British, but he was somebody who said, “Sex should be lived and cared with a little bit of style. It should not be segregated from sophistication.” That’s why Bond elicits the thought of my dad and vice-versa.

What other projects about telling the story of your father do you have lined up?

We’ve been working on getting a biopic made for years. There have been conversations since I was a kid of having so many different directors and actors attached to it. The real problem was that my dad was never satisfied with the way in which his life was told. Stephen David and Peter Jaysen really came together and conveyed his life in this docu-style story that my dad is comfortable with to sign off on. I don’t want to speak prematurely about future projects because we’re still figuring out what the next steps are but we are 100 percent still investigating the best way to make a biopic. Playboy After Dark is something that is on our radar to bring back in the not too distant future.

Does your dad have someone in mind to play him?

I haven’t asked him recently. The challenge is that there’s so much that has happened over so many years that my dad and I have a different interpretation of how to tell it. He wants his life to fit into two hours. One of the scripts that came back a couple of years ago, it was about a week and a half in the Chicago mansion when the Rolling Stones were living at the house. You can identify thousands of different stories like that. That’s what it’s going to come down to. Whether or not my dad is comfortable enough to really identify a moment in his life that he wants to highlight or whether he really wants to compress this and tell this story. That would mean there would be different actors who would play him unless you want to move forward with the prosthetics which always looks weird. (Laughs.)

As chief creative officer of the brand, what plans do you have going forward?

What I have spent the last six months doing is focusing on understanding the media side of the business and finding opportunities to tie our story together. The biggest challenge was that my dad really loves the magazine and will always because that’s what started everything. He wanted to spend all of his time putting that book together. He was very much creatively directing everything else. As he aged he stopped creatively directing everything else and really just focused on the book. What that caused was senior executives and their teams to really interpret the brand however they wanted to. There’s no problem if Playboy is perceived differently outside of the office walls. One of my favorite things that my dad said was that the brand and his life is like a workshop test. People are going to take away whatever their sexual values are. It’s going to say a lot more about them than it is about him. It is a test about what someone’s sexual attitudes and appetite is. That’s fine, but we can’t have that be the case inside of our walls. We can’t have senior executives march in different directions and interpret the brand differently. That’s what was happening. There was a lot of decisions made like going non-nude and some other brand choices that didn’t seem authentic to who we were. I’ve been focused on saying, “How do we make sure we are creating not only a relevant brand narrative, but also how can we make sure that the brand is really communicating the same things?” What consumers will see as they interact with the magazine and our other media channels they will see a brand that’s most certainly evolving, but is absolutely rooted in its past.