[This story contains spoilers from the first three episodes of Apple’s The Morning Show.]

One of America’s most beloved morning show teams is disrupted at 7 a.m. when the male anchor is swiftly terminated over allegations of sexual misconduct. The female co-host left behind delivers the story from behind the trusted news desk.

The premise of Apple’s The Morning Show is sure to invoke Matt Lauer — and Charlie Rose — in the minds of viewers, and that’s because the former Today and CBS This Morning anchors, respectively, who were fired over sexual misconduct claims were the largest names in the morning world who had been sidelined by #MeToo allegations when the drama starring Jennifer Aniston, Reese Witherspoon and Steve Carell (as said male anchor) was being written in April 2018.

“When I was younger I watched morning news shows. Once I was working a lot and I had little kids, I really wasn’t as tuned in to that,” The Morning Show‘s showrunner Kerry Ehrin told The Hollywood Reporter‘s TV’s Top 5 podcast when speaking about the launch of the Apple TV+ flagship drama. Before taking the head job when the show was retooled after the explosion of the #MeToo movement, Ehrin did “a lot” of research and read Brian Stelter’s book that served as the inspiration for the series (Top of the Morning: Inside the Cutthroat World of Morning TV). But she still associated the morning show world with the fallout of the #MeToo era. “In my head, when someone says ‘morning show’ — I just thought: Charlie Rose, Matt Lauer. Sadly! To me, that was what it was about right now. So, when someone was saying, ‘do a show about morning news,’ I said, ‘well, don’t we have to talk about that?’ Because that seemed to be the most huge element of it when I walked in the door.”

The first three episodes of The Morning Show, which released with the debut of the tech giant’s new streaming service Apple TV+ on Friday (a weekly rollout will follow for the rest of the season), introduce Carell’s character as “America’s dad” Mitch Kessler, one-half of the duo that makes up the TMS anchor team with Alex Levy (Aniston) and who has been terminated after multiple allegations of sexual misconduct in a #MeToo scandal for the show and network.

Mitch is fired from the TMS desk after 15 years as one of the most prominent and charming faces in morning TV and, though he had just signed a new contract, he is not going to get paid out because his network (the fictional UBA) has invoked the morality clause. He meets with his business manager about giving up one of his several homes, including a house in the Hamptons where his wife has left him to reside along with the kids. Mitch is asked to publicly put out a statement that sympathizes with his accusers and to apologize, but Mitch is not on an apology tour — his main point of self-defense is that he was a philanderer who had consensual affairs, and that he’s not a rapist, allegedly, like Harvey Weinstein. “I didn’t jizz into a plant in front of somebody!” he screams at his legal team.

Viewers also learn that Mitch had a button under his desk that shuts the door to his dressing room.

Thanks to Ronan Farrow’s explosive reporting for his new book Catch and Kill, Lauer and his former employer NBC are back in headline news. As a result, the parallels between Mitch (helped by the likable Carell) and Lauer loom even larger as news updates continue surrounding the fallout, including NBC releasing former accusers from their nondisclosure agreements just weeks ahead of launch. The Morning Show also exposes a culture of complicity at media network UBA.

But Ehrin wants to make something clear: “[Mitch is] not Matt Lauer. It wasn’t designed to be about him; I didn’t study him. It was about a guy who works in morning news who gets fired for sexual misconduct. That did happen to Matt Lauer. It also happened to Charlie Rose and someone on Fox — it isn’t exclusively Matt Lauer.”

When speaking to The Hollywood Reporter at a recent Paley Center event in New York, Morning Show executive producer Michael Ellenberg explained that the Mitch character is a combination of many men who were accused at the height of the #MeToo era, making the show more of a “composite” of the times.

“Obviously, the show is set in the morning show world. For us, we’re in Hollywood. And what I mean by that is — this time when we were figuring out this character, for Kerry, Mimi [Leder], Reese, Jen, it was a dark time,” he told THR of the developmental process with his fellow exec producers. “The amount of people that went down on these issues — Matt Lauer is obviously the most high-profile; he’s the biggest star. So in this world, he feels like a reference point. But for us, unfortunately and sadly, there were so many reference points. So it’s not just a composite of morning shows, it’s really a composite of this moment.”

When speaking on the TV’s Top 5 podcast, Ehrin said that idea of exploring the nuances of a recognizable #MeToo scandal was her pitch for the project, and it was a tone that was supported by stars and co-exec producers Witherspoon and Aniston from the get-go. “It’s a massive subject and looking at it from a perspective over an industry, this fictional news and entertainment industry [in The Morning Show], and seeing all the fallout and all the politics and all the personal pain, just all those different colors of it seemed like a worthwhile venture,” she said. 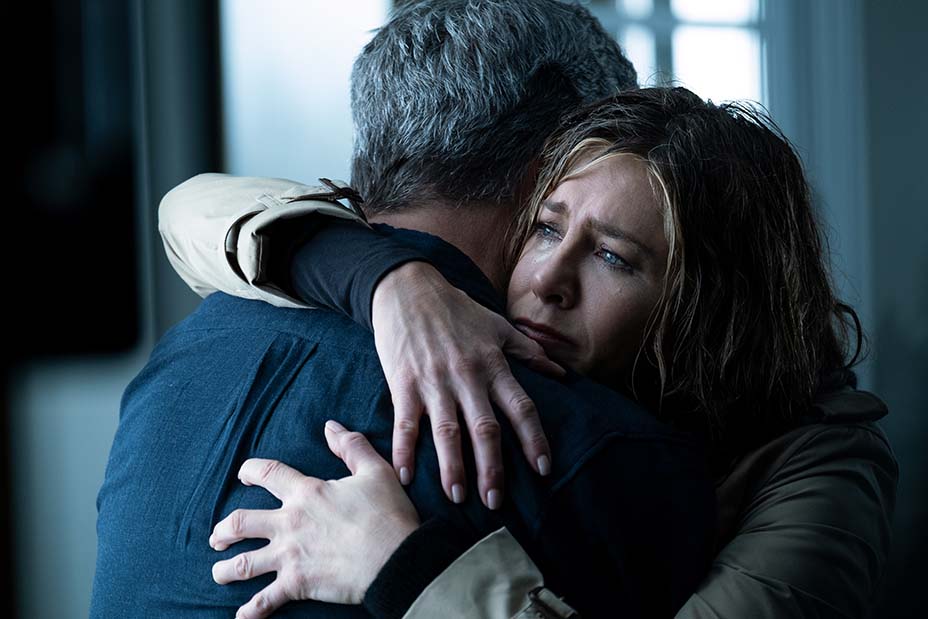 Across the first three episodes, The Morning Show follows Mitch after his departure, presents his viewpoint on the situation and shows the personal fallout he is now facing. Though Mitch has lost his power, he remains a very large part of both the show and the show within a show. When it’s revealed to viewers that his desk is fitted with the sort of button that Lauer and other Hollywood executives have been reported to have, Mitch is far from the TMS studio and yet his presence is felt by Mia Jordan (Karen Pittman), the producer who had an extramarital affair with Mitch.

“The interesting thing is that the scene is about Mitch, but Mitch is nowhere in there,” Pittman told THR at the Paley Center event of the scene where she sits in Mitch’s empty desk, presses the button and the door swings shut. “And if people actually pay attention to what Mia is going through in that scene, you’ll see a moment of triumph. But you’ll also see that moment where she’s trying to figure out what that button meant. If you’re only paying attention to the button, you might miss the moment for that character and what it says about Mitch Kessler that he’s not there. It’s possible for us to tell stories about sexual misconduct in the workplace without the men there at all. They don’t have to be onscreen.”

She then adds, “Do you know how many guys have buttons under their desks?”

Ehrin, who hails from previous long-running shows like Parenthood, Friday Night Lights and Bates Motel, echoed how common it is in corporate America. “I’ve worked with a lot of executives that have buttons that close their doors. It was a normal thing,” she said on the podcast. “It doesn’t lock the door, it just closes the door. So if someone comes in and it develops into a conversation that you don’t want colleagues overhearing, you push the button and the door closes.” 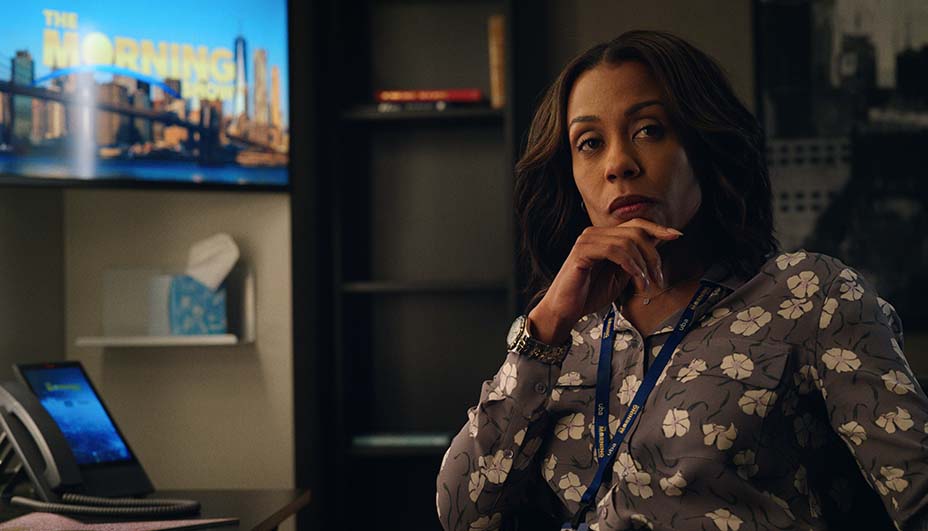 But it’s that emotional reaction exhibited by Mia in the scene that The Morning Show is most interested in highlighting, even if that humanity also extends over to the villain in the series.

“I’m fascinated by the concept of a person who had so much power and who was so protected within the bubble of that power for so many years. I see this all the time in different ways: Hollywood protects what makes it money. So [Mitch] was very protected, to the point where he doesn’t even consciously understand that he can do something wrong,” Ehrin told TV’s Top 5 of continuing to follow Mitch’s story. “He thinks he’s so beloved, so right, so successful. He’s so used to being petted and told ‘yes, yes, yes’ all the time. And he wakes up one day and that bubble breaks, and what does that look like?”

She continued, “It wasn’t written particularly sympathetically. It was really a guy who is pissed and thinks that people don’t really understand what happened. That’s his initial human reaction. I think to have a cast and a show of fully nuanced, complicated and whole characters and then to have one character who is just like a monster wouldn’t have been the same storytelling. And I wanted to tell that story. There’s a larger purpose to this which I can’t say because you have to watch the show — and I would spoil it — but I wanted men to watch the show and recognize themselves. And if you see a guy who is just a monster you’re like, ‘Oh, I’m not that guy.’ It was part of the story we were telling and I think I could have a much better conversation about this after the last episode drops.”

'Morning Show': How the Apple Drama Captures a Media Culture at a Crossroads

The Morning Show is now streaming its first three episodes on Apple TV+. Head here for more info on the streaming service.