Continue to The Hollywood Reporter SKIP AD
You will be redirected back to your article in seconds
Skip to main content
October 30, 2019 1:38pm
Logo text

Jennifer Aniston had met Steve Carell twice before she had to throw herself into the most emotionally demanding scene of the Morning Show‘s first episode.

During her first day on set of the Apple TV+ flagship drama, Aniston had only met her scene partner in the trailer and during rehearsal before she had to film the pivotal premiere moment where her character confronts her co-host of 15 years (played by Carell) about his firing over sexual misconduct allegations.

“It was sort of like diving naked, chest first, into an empty pool — that’s how it felt,” Aniston said with a laugh during a Morning Show panel at New York’s Paley Center on Tuesday. “We had to establish a 15-year relationship and heartbreak and all of that, and it was really big at times, and I was like, ‘How big do we go?’ But once I got that out of the way I felt, ‘Oh, I can take this on now.'”

The Morning Show, a drama about the fallout at America’s most beloved morning show after its starring male anchor is sidelined by #MeToo, demands much from Aniston to play the veteran anchor, Alex Levy, who is left behind at the TV desk to pick up the pieces. In the first three episodes, which release when Apple TV+ launches on Nov. 1, Alex delivers fiery monologues, simmering rage and devastation in silence as she processes the trauma of losing Carell’s Mitch Kessler.

Aniston says she isn’t a “melting breakdown kind of person,” but she understands the appeal of having a public meltdown after being able to play out several on the Morning Show stage. And there are other truths that she brought to the performance — particularly when it comes to her character speaking her mind, without fear of consequence, as she fights for her seat at the table.

“Kerry Ehrin, our writer and showrunner, has just tapped into the brain and into human emotions in the most stunning way, so there was not much that needed to be done but speak her words and relate to it,” Aniston tells The Hollywood Reporter of moments that are sure to leave many female viewers wishing they could borrow some of Alex’s dialogue. “I do have a memory of being in a car on the way to an event, having moments where you just don’t want to get on a red carpet, so [a limo moment in the show] may or may not have happened, but not at the height of hysteria. It probably just made me cry.”

The three-part premiere of The Morning Show launches into Mitch’s downfall while also setting up the relationship between Alex and Reese Witherspoon’s Bradley Jackson, a rising reporter who, without spoiling the details, quickly finds herself inside the Morning Show orbit after Mitch’s departure. As the two women navigate their newfound opportunities, the tone of the series shifts between the big moments and what is lying beneath them, captured by the direction of Mimi Leder.

“It was hard to really crack this world of fast-paced energy and insanity, and I wanted to stop at times and insert into the visual language these private moments,” Leder tells THR of some early standout scenes involving Aniston and Witherspoon. “These shots where I’d push in on their faces and really look into their eyes and kind of see the truth.”

One of those moments comes early on, when the camera lingers on Alex as she sits alone in her dressing room, preparing to go on air. “She’s fucking losing it emotionally,” says Leder. “And what she needs to do is look into her soul and — she’s so angry and so full of multiple emotions — she needs to pull it together and not be that little girl who is full of fear, but that persona that everybody responds to in the morning that needs a safety net. That’s what that show is about. This show is so much about control and people trying to control them and them trying to control the narrative.”

On the panel, Aniston and Witherspoon, who also exec produce the series, were joined by Ehrin, Leder and executive producer Michael Ellenberg as they spoke to CNN host Brian Stelter, whose book Top of the Morning: Inside the Cutthroat World of Morning TV inspired the drama. What stood out most from the stars’ research — which included time behind the scenes at Good Morning America and conversations with real-life anchors like Diane Sawyer — was the anchors’ talent for pulling it all together for the cameras no matter what’s going on in their personal lives.

“Whether you’re going through a divorce or your child hates you or your partner is a sexual predator, they have to just turn the cameras on and be bright and shiny-eyed for America and compartmentalize,” Aniston said. “And to have the drive to continue to do that for as many years as they have, and to love what they do so much that waking up at 3:24 every morning is worth it.” Witherspoon adds, “They are revealing themselves — it’s their real reaction to tragedy or to seeing something lighthearted. They’re sharing so much of themselves, and people know if they are being phony or fake, you don’t last that long in that business. It’s the super genuine people like Diane, Gayle King, who have this gravitas but also this joie de vivre that is this odd cross-section. They’re hyper-intellectual but also want to have fun. That’s a really unique individual.”

Apple's 'The Morning Show': What the Critics Are Saying

The Morning Show was bought by Apple in early 2017 and retooled after the explosion of the #MeToo movement later that year. When Ellenberg was initially developing the show, his reference point was the Fox News sexual misconduct scandal under late chief Roger Ailes, but he was also interested overall in how female anchors are treated in the morning-show world. “These shows that we used to look at as entertainment, over 20 years later, now when something real is happening, that’s where you turn to. And then every three or four years, the high-profile female anchor on these shows would go through some humiliating, very public spectacle,” he said on the panel. “People get fired all the time, but not in this cruel way. And I guess I was curious if there was a nexus of those two things, with trying to represent America and the way women are mistreated on these shows. The Fox News scandal was live, and the Megyn Kelly stuff. All of that was happening. It was a world you thought you knew, and it was becoming clear you didn’t really know it at all.”

Then, while Hollywood was being rocked by sexual assault and misconduct allegations against the likes of Harvey Weinstein, Matt Lauer, Charlie Rose, Kevin Spacey, Louis C.K., Brett Ratner and countless others, Ehrin was putting pen to paper and writing what would become the 10-episode first season (the drama received a 20-episode, two season order).

“I care [about this world] because I’ve lived in the media world as a woman. I’ve had my experiences in corporate settings. I’ve had to be silent about things, and I’m enormously grateful to the women who have spoken up,” said Witherspoon at the event. “In many cases, they have nothing to gain from it. They can risk ruining their reputations, losing their careers, humiliating their families or themselves, and the fact that they have come together and stood together to tell their stories so they don’t have to hide them anymore is enormously emotional for me.” Sitting next to her, Aniston added, “And great change has come out of their sacrifices, for them to throw themselves on the sword so that women, all of us now, don’t have to deal with that.”

When The Morning Show reports on its own scandal in the premiere, it names its fictional network as the only one of the broadcast networks to have yet been hit with a #MeToo scandal, and, after making more than one Weinstein reference, Mitch goes on to classify himself in the “second tier” of men to be taken down by the movement. By setting its timeline beyond the initial #MeToo explosion, The Morning Show explores grayer areas with nuanced characters and storylines as it continues to follow Mitch after his departure. Carell’s likability, especially, adds an added layer of conflict. “It’s all up to interpretation, and there are varying degrees of all of this behavior. And he has done horrible things, but in his mind, the charming narcissist has no idea that what they have done is violated someone’s sacred space in their body,” Aniston tells THR of Mitch’s point of view.

Teasing what’s to come, Ehrin said, “The season is about the fallout of the misconduct scandal, how it affects everybody, how it falls out on everybody, how they have to rejigger the show, how there are different power plays to doing that. It’s a big web, and [Alex and Bradley] are at the center of it, coming at it from different sides but circling around each other and they intersect in the middle.”

“We’re in a really interesting crossroads and culture,” added Witherspoon. “I think we’re all trying to figure out how to behave, where to stand, where to look, what to be, how to act. It doesn’t matter if you work in media or any corporation, I think everyone is sort of struggling with the dynamics that have shifted so radically in the last couple of years. Journalism has changed so much. The emergence of social media and immediacy of so many outlets. But there’s still this morning show — and it still matters! It’s this incredibly huge moneymaking machine, and if you drop in the ratings, you lose $100 million in ad sales in a day. The stakes are so high.”

And those stakes are likely why Ehrin is already looking beyond two seasons and into a “rich” world that Witherspoon agrees has much to explore. “I think it’s a show that could go on for a long time,” she tells THR. “It’s a really fun world to work in, and media is so diverse that it’s just a rich world to explore — gender dynamics and ageism and sexism and Bradley’s rage and her expression of it, modern feminism, old-school feminism. All that stuff. It’s very rich.” 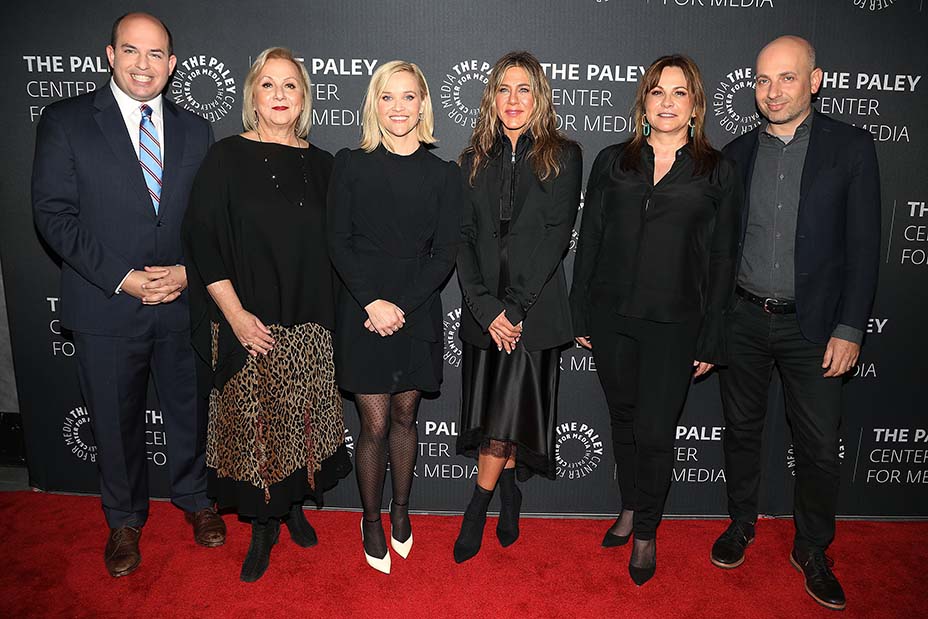