[This story contains spoilers from the series finale of The CW’s Arrow.]

When Arrow premiered on The CW in 2012, its superhero legacy included one long-running drama that purposefully avoided putting its square-jawed hero into a super-suit until its very last episode a year before. The move made sense, considering just how many Superman iterations pop culture had seen to that point.

But Arrow took a lesser-known DC property — the Green Arrow — and very quickly established a universe so full that the series would lend its name to a TV world that includes at least five other shows — The Flash, Supergirl, DC’s Legends of Tomorrow, Batwoman, upcoming drama Superman & Lois, and potential series Green Arrow and the Canaries.

And while the namesake drama came to a close Tuesday night, the world of Arrow will live on. Proof: Oliver Queen himself (Stephen Amell) was killed off for good two episodes before the finale, yet the character managed to remain a larger-than-life presence throughout the show’s final hour.

Executive producers Marc Guggenheim and Beth Schwartz spoke with reporters following a screening of the series finale, which saw plenty of closure for most of Arrow‘s main characters, plus special visits from Oliver’s crime-fighting buddies Barry Allen/the Flash (Grant Gustin) and Kara Danvers/Supergirl (Melissa Benoist) as the Arrow gang said goodbye to their No. 1 hero.

“It was really important to me and Marc to honor all of our characters in this. We spent a lot of time in the room brainstorming endings for all our characters,” said Schwartz, who served as the showrunner. “Whether they were series regulars in season eight or they were series regulars in season one, we really wanted to give everyone a satisfying ending so that you could envision what their lives would be like after the show was over.” 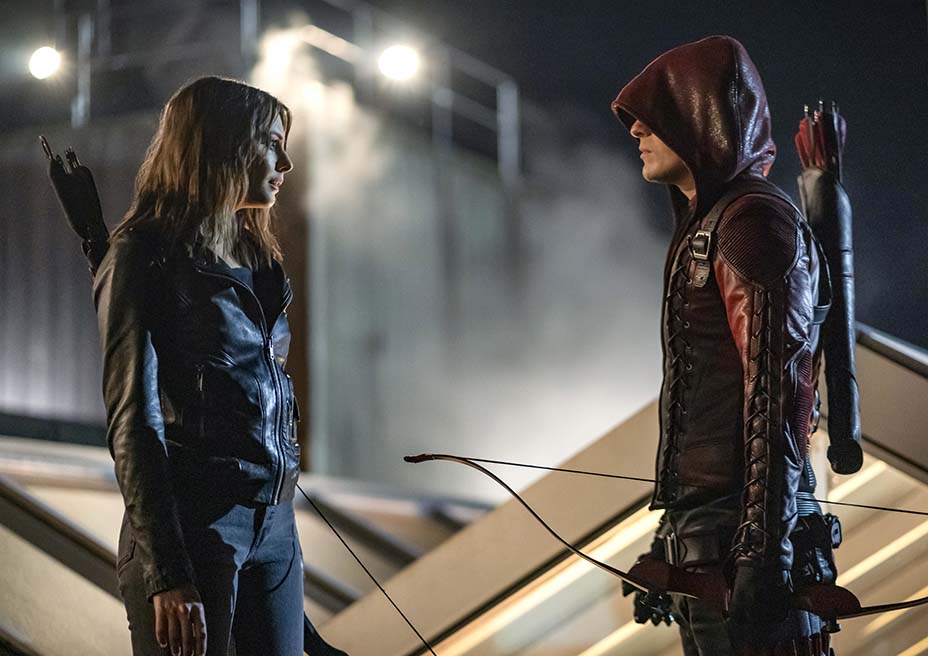 In the ante-pentultimate episode (and the Arrow installment of the mega-crossover Crisis on Infinite Earths), Oliver turned into all-knowing DC hero Spectre before sacrificing himself to save all of humanity, resurrecting some dearly departed loved ones in the process. The penultimate hour, “Green Arrow and the Canaries,” introduced the conceit for the potential female-led spinoff toplined by Kat McNamara (Oliver’s time-traveling, crime-fighting daughter Mia), Katie Cassidy and Juliana Harkavy (both different versions of the DC hero Black Canary). The finale brought back Amell — and other departed cast members — to say goodbye to Oliver Queen and wrap up the storylines for all of the series’ main characters.

The last scene of the series saw a future Felicity in 2040 finally ready to reunite with her true love, stepping through a portal to the afterlife with her beau. It’s a scene that Guggenheim wrote back in June after a particularly fruitful morning meditation session.

“This has never happened to me before or since,” he said. “I came out of the meditation with the entire scene in my head, like literally word for word, exactly as you just watched it. I quickly opened up my laptop, and [mimics typing] ‘I gotta get this down.’ For me it felt so right. And I very excitedly texted Beth, ‘I wrote the final scene, I gotta send it to you.’ Of course the big question was, is Emily coming back to be in it? We were like, well, now she really has to because I really love the scene. And fortunately she did.”

The payoff for the fan-favorite romance was always the plan — “We didn’t even think of another ending,” Schwartz said. “We didn’t have a backup plan at all” — but it did depend on Rickards’ schedule. The original flashback for the episode would’ve involved Oliver, Diggle and Felicity, but was scrapped once Rickards’ schedule dictated that she could only return for two days. The final scene between Oliver and Felicity was also the final scene the cast and crew filmed together.

“It was past midnight. We were all there, including several castmembers who didn’t even work that day. Colin Donnell showed up, Ricky, Juliana,” said Guggenheim, plus many of the writers.

Ramsey, who wrapped his final scene earlier in the day, said he and the rest of his co-stars stuck around until the bitter end. “It was a celebration, but also just surreal.” Ramsey’s story isn’t necessarily over, either, as the finale teased a long-held fan theory that Diggle could eventually become another major DC superhero: Green Lantern. (A Green Lantern show, from Arrow-verse mastermind Greg Berlanti, is also in the works at streamer HBO Max.) 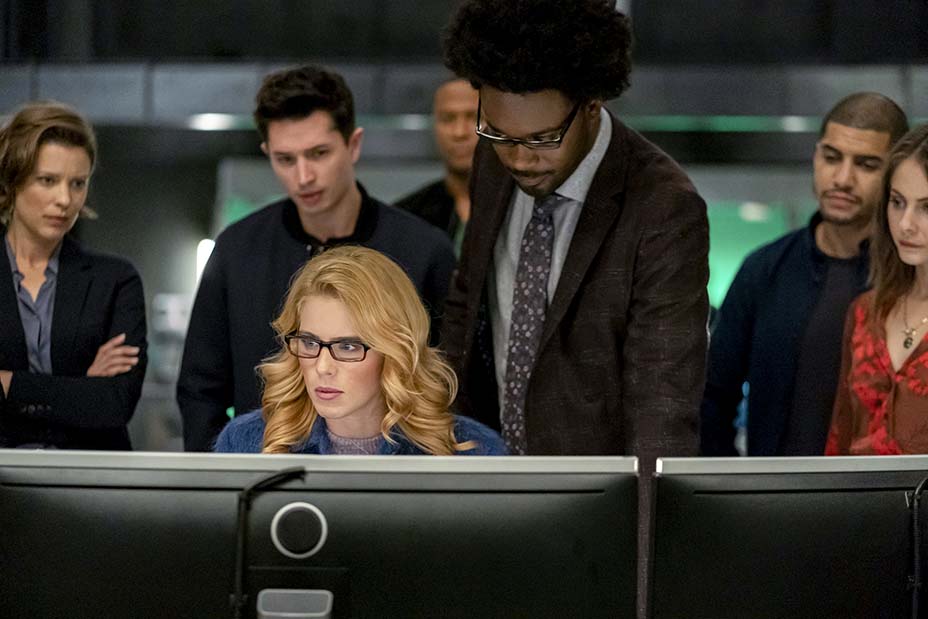 “We’ll still see, believe it or not,” Ramsey teased of the mysterious alien box his character found in his last scene, though neither he nor Guggenheim would comment much further about the intense speculation surrounding the character. Said Guggenheim, “This was something that was worked out over a year ahead with DC Entertainment. We very specifically negotiated and discussed the parameters, and I feel like to say anything beyond what we have showed you would violate our agreement with DC.”

One other major story point for the series finale was a no-holds-barred fight sequence, which Guggenheim dedicated to the hard-working stunt team.

“One of the things that was always one of our checklist items was, we are going to leave it all on the field as far as our action sequences are concerned,” he said. “This is my bugaboo and my hobbyhorse: In seven seasons of Arrow we have not received even a nomination for a stunts Emmy. In fact, when we delivered this cut to the studio and the network, I had post [include a chryon that said] ‘Never received a stunts nomination.’ We don’t even want the award at this point. We just would like this amazing team to be recognized for the work that they’ve done.”

'Arrow' to End With Abbreviated Season 8 on The CW

In a world with time travel, multiple universes and superpowers, no ending is actually permanent, and that includes Oliver’s: Should the occasion arise, there’s always room for Amell to reprise his role, particularly now that the character is technically still a part of the DC canon.

“The whole point of making him the Spectre was just to give us story opportunities, because who knows what’s going to happen in the future,” said Guggenheim. “And the one thing I always say every time a character dies on any of the shows, it’s like, we’ve got alternate realities, we got time travel, we got flashbacks — you name it. We have all these different devices. No one’s ever really gone. I mean, look at Colin Donnell. I mean, Jesus Christ! He’s practically a series regular still in season eight.”

“While I would love to always see Stephen back,” he continued, the circumstances of the character’s return would be pivotal. “If we brought him back in the seventh season premiere of Flash it would probably diminish this a bit. Fortunately, we we have some sway with those folks.”

Quipped Schwartz, “There’s always the opportunity to cut to him and Felicity in the afterlife just hangin’ out!”