With J.J. Abrams being courted for what could be a record-breaking $500 million new overall deal, executives at his longtime home of Warner Bros. Television (and corporate parent WarnerMedia) are pulling out all the stops to ensure that the company retains his services — especially since at least two other media behemoths are looking to sign him.

The courting process for Abrams underscores the ever-widening class distinction that has emerged in the shadow of the fight between the WGA and the ATA over packaging fees: As rank-and-file writers battle it out with the agencies over better representation (and, of course, more money), Hollywood’s top showrunners are landing eye-popping nine-figure overall deals with increasing regularity.

Indeed, the lengths media giants are willing to go to land (or keep) top showrunners is reaching historic peaks. Disney’s 20th TV, for example, may revive Dan Fogelman’s now-defunct 2016 sports drama Pitch as a carrot to entice the This Is Us creator to remain in-house. Abrams and Fogelman — along with Seth MacFarlane (Family Guy), Mike Schur (The Good Place) and Steve Levitan (Modern Family) — are prime examples of the hitmakers who are poised to land mammoth overall deals, each of which would have been the biggest of its kind just five years ago.

So how did things get to this point? It all started with Shonda Rhimes — and, as is usually the case these days, Netflix. The streamer sent shock waves through the studio system when it shelled out $100 million (plus ownership stakes) to Rhimes, with the Grey’s Anatomy creator leaving ABC, her home of 15 years, with time remaining on her contract. Six months later, the arms race for TV’s top talent officially kicked into overdrive when Ryan Murphy (American Crime Story) joined Rhimes at Netflix with a record $300 million deal.

What has emerged is a caste system of sorts, with three distinct tiers of overall deals shaping today’s small-screen economy. The most sought-after writers and producers are also the most versatile — those who have the ability to juggle multiple series and groom the next generation of showrunners: Fogelman, Jonah Nolan (Westworld), Liz Meriwether (New Girl), and Phil Lord and Chris Miller (The Last Man on Earth) fall into this category. MacFarlane, like Rhimes and Murphy before him, is expected to leave his longtime home at broadcast-focused 20th TV for what sources estimate could be yet another nine-figure deal.

The second tier, which has seen considerable activity and financial growth so far this year, consists of hitmakers who limit their workload to one show at a time. This category includes all-stars like Better Call Saul‘s Vince Gilligan (who re-upped with Sony last summer for three years and $50 million) and Levitan. The latter, who has been without a deal since last summer, is expected to remain with longtime exec and travel buddy Dana Walden at Disney’s 20th TV.

The big bucks, however, have not trickled down to the third tier of overalls, which consists of longtime writers fresh off hit shows. This category includes people like Maria Ferrari, who spent a decade on monster hit The Big Bang Theory. Her newly inked three-year, $6 million deal with Warner Bros. is on par with pacts from 20 years ago for writers fresh off of Cheers and ER, as not everyone is able to capitalize on the short supply of proven showrunners amid a higher-than-ever demand for content.

Many of the eight-figure paydays to the likes of Mindy Kaling (The Mindy Project) and Nahnatchka Khan (Fresh Off the Boat) arrive as networks and streamers are looking at the value of a hit show differently. In the past, writers on Friends, for example, would have to wait years to cash in when their backend points (aka a percentage of ownership on the series) would mature thanks to rich syndication deals. Those hits also delivered value in ad sales (a 30-second promo during the Friends finale sold for $2 million in 2004). Now, the value of a series on a streaming platform is less quantifiable and based instead on how many subscribers will pay for the service. So, while Amazon is shelling out $250 million for global rights to The Lord of the Rings with the hope that it drives shoppers to fork over $119 a year for Amazon Prime (with free delivery, naturally), Netflix is hoping Murphy, Kenya Barris (Black-ish) and Marti Noxon (Sharp Objects) will prove to be subscriber draws, too. Those deals — many of which extend beyond the once-rare four-year variety — don’t include revenue from selling the show abroad. Instead, backend buyouts (like Murphy’s deal), advances or bonuses have become the lucrative new normal and are largely what’s inflating these massive upfront sums.

“The magnitude of what we’re seeing here is a reflection of the changing business model where content is being completely exploited in one ecosystem versus being sold in different ones down the road,” Ted Chervin, co-managing director at ICM, says of deals with producers like Berlanti ($400 million at Warners) and Mr. Robot showrunner Sam Esmail ($100 million with Universal).

Traditional studios, meanwhile, continue to court TV’s biggest names with a reminder that the broadcast model still offers the biggest upside potential. Those outlets continue to diversify their portfolios, offering writers the ability to sell to any of their vertically integrated platforms that now include streaming services in addition to broadcast, cable and premium networks, on top of the ability to sell to outside buyers. “There’s no bigger money than broadcast backend. We have to remind people of that,” says ABC Entertainment president Karey Burke.

While there are a limited number of remaining players who could fetch nine figures, insiders don’t foresee the demand for experienced writers and producers cooling until at least one streamer calls it quits on scripted originals.

“I’ve seen this wave before and I’ve also watched it wane — we’re at another peak now, and I’m fairly sure we will see it cycle back down again,” says Burke. Her new boss, Walden, announced four new overall deals with 20th TV in the first week since the Disney deal brought Fox’s Lee Daniels (Empire) and Kurt Sutter (Mayans M.C.) into the fold. Still, adds Burke, “Our studios and all our suppliers are feeling the pressure.” 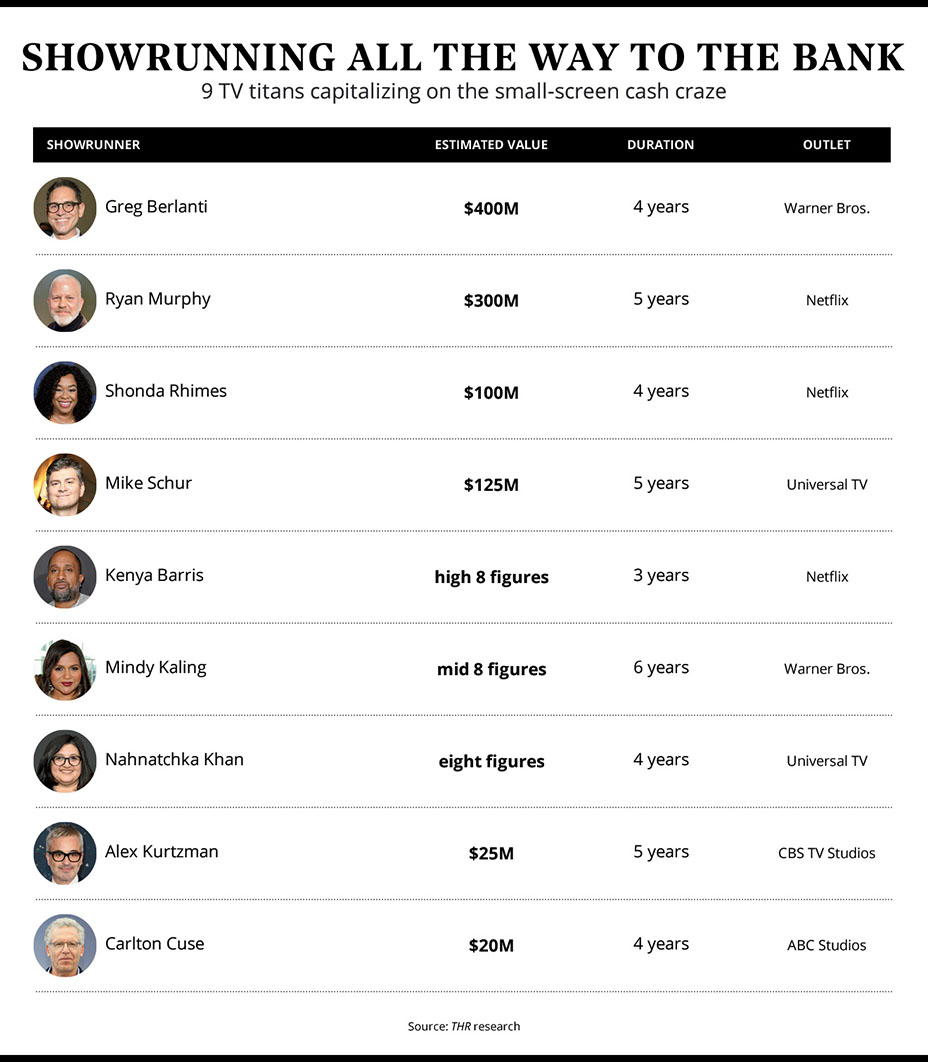