To most people, she is Moana — but in her first on-camera role, Auli’i Cravalho, Disney princess turned star of NBC’s new high school musical drama Rise, is preparing for fans to start recognizing her as herself.

“I do get recognized. It still surprises me today,” the 17-year-old Moana star tells The Hollywood Reporter. “Especially in Hawaii when I’m home, I am Moana. If I hear Moana, I turn.”

Cravalho’s first professional role was in the now-classic Disney animated feature, so being in the public eye at all has taken some adjustment for the high school senior. Her second role — which she landed after her first-ever on-camera audition — is playing high schooler Lilette in Jason Katims‘ Rise, which debuted last week after the This Is Us season two finale. Being on camera is something she’s still getting used to.

“My voice I know. I know how to take care of my voice; I know how to put emotion through my voice. I sing the way that I feel. Sometimes I think we need music to really emote in ways that sometimes we just can’t with our bodies,” Cravalho says. “To be able to transition into acting and to wonder, ‘Am I doing something wrong or right with my face?’ I’ve grown so much over just the course of the 10 episodes that we’ve shot with Rise. I watch my performance in the pilot and in the second and third episode, and I’m like, ‘Why did I do that?’ “ 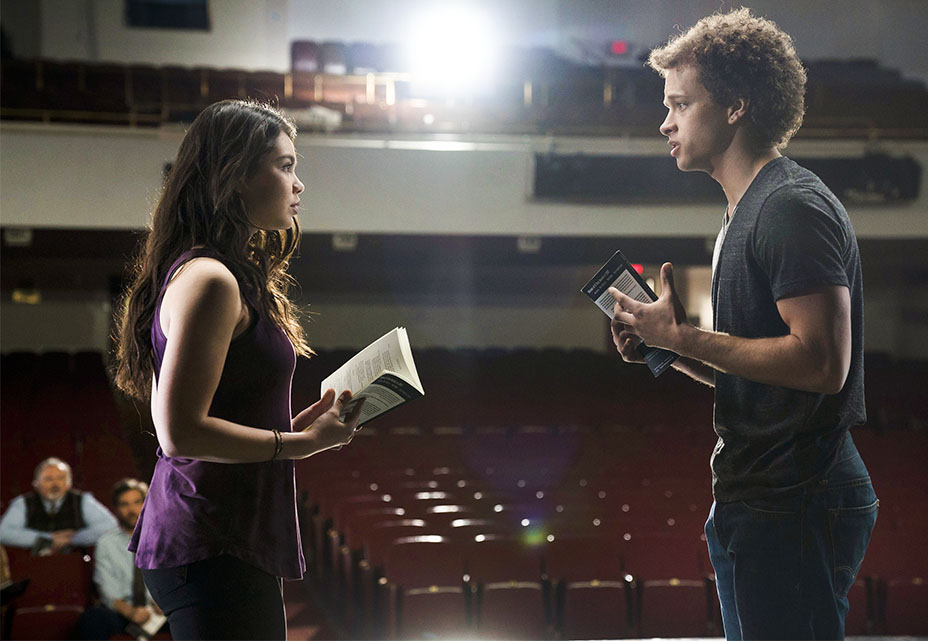 She’s gotten a crash course in on-camera acting from her older co-stars, including Josh Radnor and Rosie Perez as drama teachers Lou Mazzuchelli and Tracey Wolfe, along with her on-screen BFF Ted Sutherland, who plays a religious teen struggling with his sexuality when cast as a gay character in Spring Awakening, the school musical.

“Whether he knew it or not, [Ted] is an interesting and old soul, and I appreciate him for everything that he’s given me. He’s straight and to the point, and he also has a very interesting way of going through his lines and of learning his character. I would watch him from the wings. I would watch how he gets into his character and I would watch what he would do in between takes as well, whether it was just staying solemn or doing push-ups, or just something physical or even non-physical — little hints of tears in his eyes or a small quirk of his smile. I realized he was so into his character that if I called him Ted, I’m not sure if he would respond at first. I appreciate that, and I think he’s one of the best actors I’ve ever seen.”

It’s through that dedicated observation of her co-stars — and plenty of practice — that Cravalho has become more comfortable on screen and with her own acting skills.

“As I got more comfortable with myself, as I got more comfortable with my acting partners, I realized it’s not really about acting — it really is about being in that moment. It was such an epiphany for me when I found that out. It wasn’t necessarily an exact moment that I discovered it, but I realized no wonder it’s not coming across right, because I’m wondering if it is, and I’m trying to make you feel something that I don’t. I’ve learned so much, and I love acting for that — the fact that I can constantly learn and do research on my character, because she’s a living, breathing person just like me.” 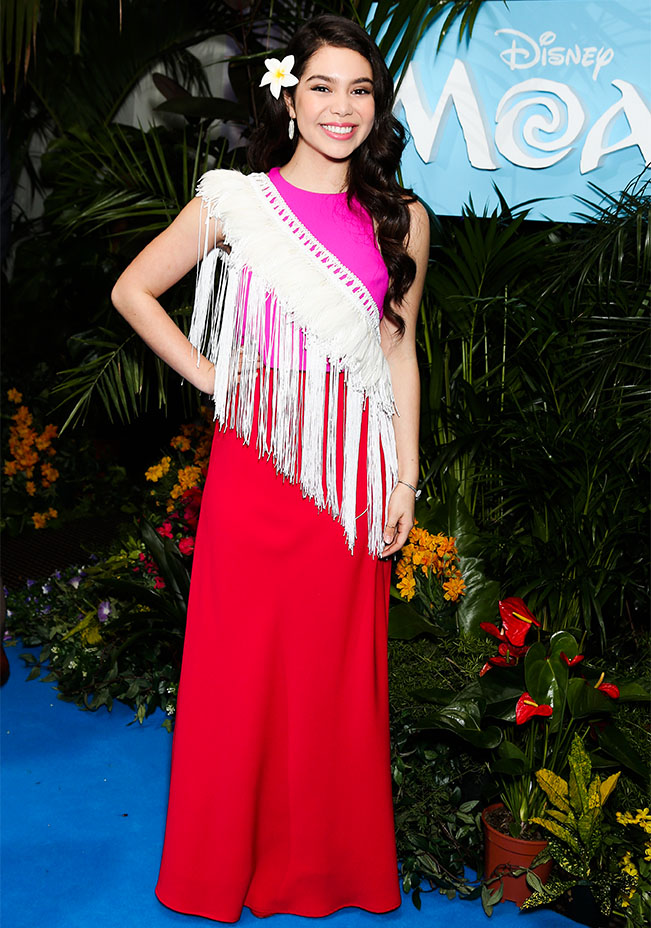 Rise casting director Tiffany Little Canfield, who met Cravalho while the then 16-year-old was in Los Angeles rehearsing for her performance at the 2017 Oscars (watch, below), said she was blown away by the actress’ raw talent: It was perfect for both high schooler Lilette and for 19th century German teen Wendla, the lead in the Rise school’s production of Spring Awakening.

“She was so committed and understood acting on an instinctive level. She has an emotional maturity that is so rare in a girl her age because she’s real high-school age,” Canfield told THR. In fact, Cravalho had a single day to prepare for her Rise audition. “That’s a scary thing, to walk in and know we’re going to be judging her and it’s just going to be her on the camera,” Canfield said. “Whoever’s reading with her is just a disembodied voice, the camera’s just on her, and looking in her eyes and the way she did that, I’m just so proud of her. [By the time she performed on the Oscars] we knew she was one of the stars of our show, and then seeing a 16-year-old pull that performance off — I was crying. I was just absolutely sobbing knowing that we were going to get to work with her on our new show. It was a little bit overwhelming for this jaded casting director here.” 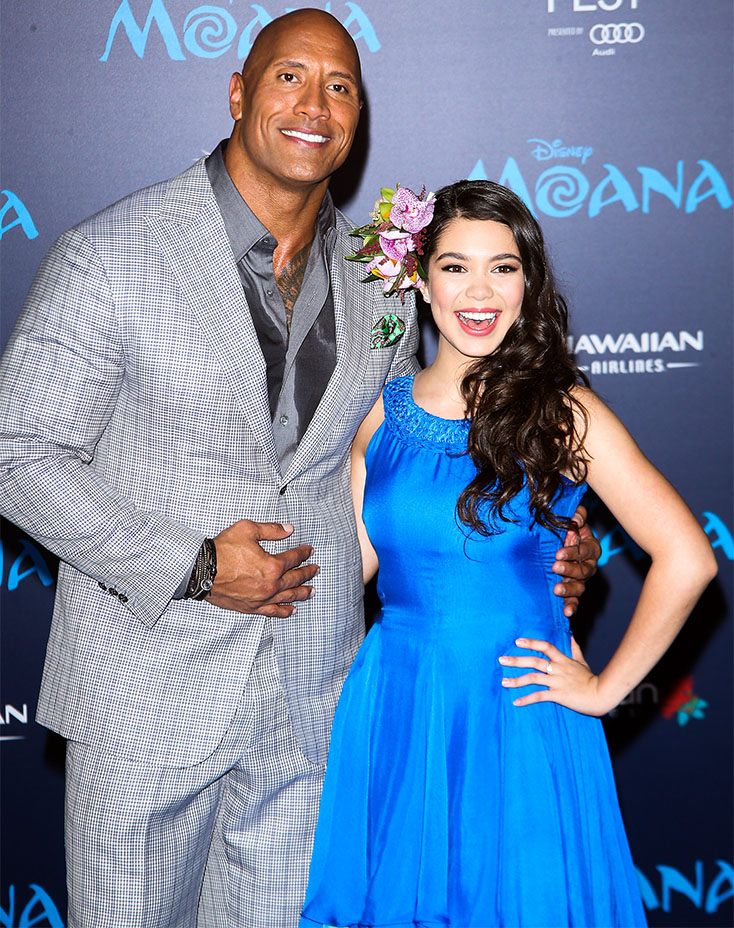 Cravalho cried during the casting process too, because she loved Katims’ emotional script. The project, then known as Drama High (like the book by which the series was inspired), felt like a perfect match.

“I cried because I knew that it was real; I cried because I knew it was relevant; I cried because I had read Spring Awakening, and I thought it was the perfect show to put on. I just loved everything about it,” Cravalho says. “There are some projects where you read a script and you’re like, ‘This is my role, I want that.’ For Drama High, I didn’t feel that. I thought, ‘I want this to be made, and I don’t know who’s going to be a part of it, but I hope the best for it, and I want the best people for it, so I will give my best audition. I will sing the only audition song that I have, and I’ll give you everything I’ve got. But if I don’t make the cut, I’m just really for the hoping for the best for this project.’ That’s what I felt for Rise.”

Katims tells THR it was a no-brainer to cast the young actress, and she’s certainly lived up to his lofty expectations.

“About a week before we started shooting the pilot, we got the whole ensemble cast together to do rehearsals. [Auli’i] walked in and she had just sung on the Oscars a few weeks before that, but she came in and she was the most nervous person in the room because she had never been on camera before,” he says. “It is so amazing to watch. I was in the editing room watching some incredible scenes she did — character scenes between her and her mother that were wrenching to watch. It’s really been an exciting process.” 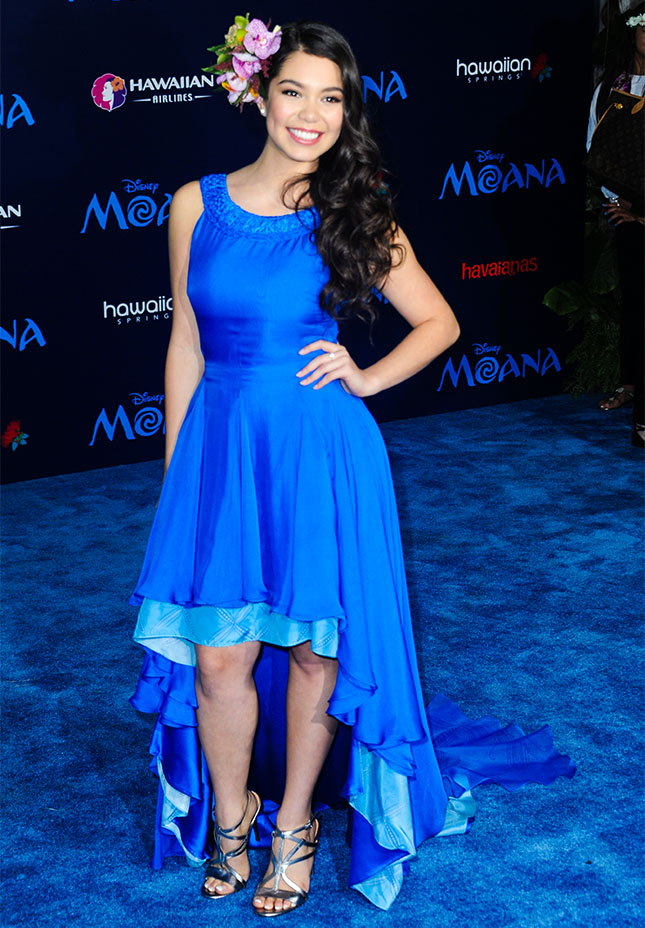 Now, with a full season of a TV series under her belt, Cravalho isn’t quite sure what her next move is. She admires fellow young actress Yara Shahidi (Freeform’s Grown-ish), and she talked technique with Glee grad Lea Michele (who originated the role of Wendla on Broadway) when they performed at the same concert last fall. But she certainly wants to keep learning about acting, singing and herself.

“I think I’ve been looking back so much, but I haven’t really looked forward. I’ve realized, my gosh, I was just a freshman in high school and then all of this happened. I’ve missed dances at my school, and I’ve missed assemblies, and I feel like I’ve grown up so much,” she says. “I’m grateful for everything that has come to me, and I realize the only thing that has really been steady is my mom, and my appreciation for every role that I’ve been given — and I’ve worked hard for it. But I don’t know where I want to go. I want to be happy, and whether that keeps me in this industry or not, I just really want that to be my goal.”