Following sterling presentations at both San Diego Comic-Con and D23, fans are finally getting a taste for the future of the Marvel Cinematic Universe after events of Avengers: Endgame. At last weekend’s D23, Disney revealed that Kit Harington and Gemma Chan were joining the cast of the upcoming Eternals movie as Dane Whitman and Sersi, respectively.

These additions might seem random if you haven’t read some of the lesser-known Marvel comic books, but fans of a certain cult ’90s Avengers run might be noticing a pattern.

“The Jacket Avengers,” as they are often fondly called, first began to appear with Crystal (a member of the Inhumans) and Sersi donning the iconic brown leather jackets in Avengers No. 346. By issue No. 349, the stylish pair are joined in their new sartorial choice by Dane Whitman A.K.A. Black Knight. What can these cool jackets and the 1992-94 run that they came from tell us about the future of the Marvel Cinematic Universe? Actually, quite a lot.

Back in this era, the main Avengers team was made up of Crystal, Sersi, Black Knight, Hercules, Vision and Black Widow, with the latter donning her own full time matching jacket. This core group was often joined by Captain America and Hank Pym, with outliers like Quicksilver, Thunderstrike, and Deathcry even getting in on the action. Marvel’s iteration of the mythic character Hercules — who briefly put on his own jacket in Avengers No. 374 — has long been mentioned by fans as a potential hero for the next phase of the MCU, and the confirmed additions of Sersi and Black Knight seem to hint that those wishes might soon be coming true.

The adventures of the Jacket Avengers often saw them head to space, which fits in with Marvel’s current love for everything cosmic, and the main storyline of the era could potentially hint at where The Eternals might find their big bad. During this run it’s revealed that an alt-universe version of Black Knight known as Proctor is traveling through multiple dimensions to kill versions of Sersi and generally cause some serious inter-dimensional chaos alongside other Avengers doppelgangers known as The Gatherers. The fact that Dane Whitman was added to the roster of The Eternals could hint that Proctor may make an appearance, though there’s always the chance that it could be as simple as the fact that Black Knight has at times been in a passionate romantic relationship with Sersi.

When it comes to the main jacket-loving members, Crystal is the only true unknown quantity here as she was introduced in the short-lived and much maligned Inhumans TV miniseries. With Disney+ and the cancelation of Marvel TV’s Netflix shows such as Daredevil, the rift between Marvel Studios and Marvel TV has never been stronger. There’s no chance Crystal from the Inhumans TV series would pop up in the MCU. Rather, if Marvel Studios head Kevin Feige is determined to use the character, it’s likely he’d recast.

Or he could replace her with a different cosmic female hero, possibly Monica Rambeau, who’s been known to wear a jacket as a main part of her costume in the comics and even received Carol Danvers’ brown leather jacket when she appeared in this year’s Captain Marvel. Monica has also been announced to appear in the upcoming WandaVision series on Disney+. 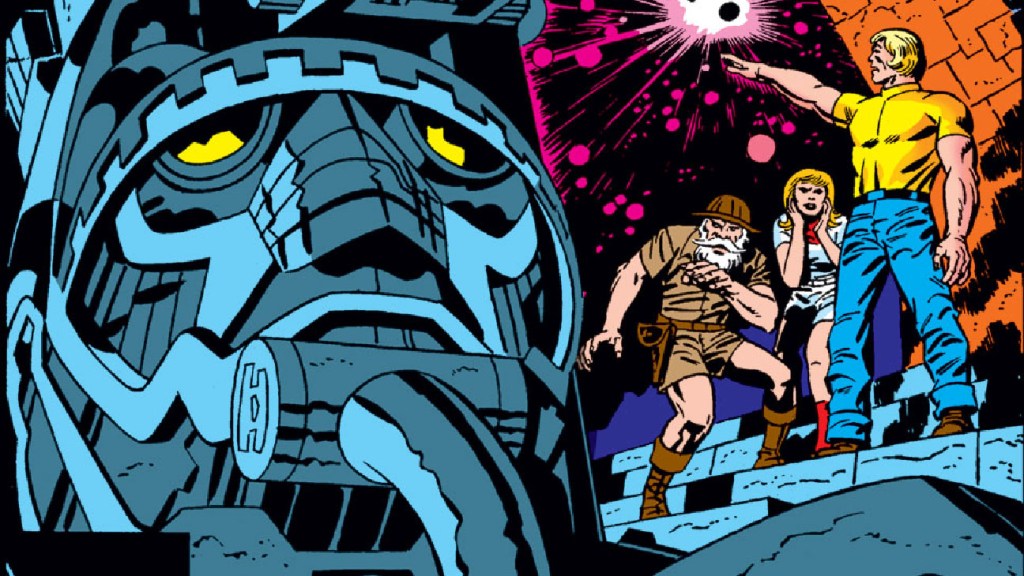 The makeup of the jacket Avengers seems to line up with Marvel’s current plans. In the beginning of the comic book arc, Vision is in his grey phase, which occurred after he was destroyed and brought back to life.Ffans have theorized that Paul Bettany’s Vision could return in that form after his destruction at the hands of Thanos in Avengers: Infinity War, and that concept looks even more likely with WandaVision coming soon. Though we know that Scarlett Johansson’s Black Widow is dead, a new white costume revealed at D23 suggests that her solo film might introduce us to a new character to take on the Black Widow mantle and potentially wear the jacket on this iteration of Marvel’s flagship team. If Natasha is wearing a white costume in the 2020 film, then it makes sense that Florence Pugh’s Yelena Belova might take on the black costume mantle of Black Widow — which she has worn in the comics — making her the perfect replacement for the original Avengers member.

It would be a brave gambit for Marvel to take such an unexpected route filled with deep cut characters, but the MCU seems to be unafraid of change and surprising its fans. Just a year ago many expected a New Avengers-style team led by Captain Marvel, but instead we have the cosmic majesty of the Eternals and a new line of lesser-known heroes heading to screens as Phase 4 begins. Marvel built the MCU on taking C-list characters and making them stars so the big question is… can the studio do it again?