Aziz Ansari has been plagued by questions about a third season of his and Alan Yang’s Master of None ever since the second season first dropped on Netflix in May.

After an Emmy-winning debut season, earning both Ansari and Yang a writing trophy for their eye-opening episode “Parents,” the co-creators raised their own bar for the second round. The ambitious 10-episode journey began with Dev (Ansari) learning how to make pasta and practicing his Italian in Modena, Italy — a payoff from the first season’s finale. The black-and-white premiere served as a cinematic, neo-realist entrance into Dev’s new world. The second episode followed Dev and his pal Arnold (Eric Wareheim) road-tripping to a villa wedding in Tuscany. The pair then returned to NYC to tackle a a range of topics and other character stories, from religion, sex and race to Denise’s (Lena Waithe) coming-out story — and, of course, food.

Then, after an intentionally open-ended finale, which cut to black with Dev getting the girl (Alessandra Mastronardi) — whether the moment was real or a fantasy is still up for debate — Ansari and Yang said they didn’t know if there would be a third season.

Now that some time has passed, Ansari, who is currently unplugging and taking a break from creating new material, told The Hollywood Reporter he does hope to, at some point, deliver more Master of None.

“I’d rather we not end it here,” says the best actor in a comedy nominee. “It’s just not about buying into the machine of cranking stuff out because you have to, or making stuff out obligation and for the wrong reasons.”

Below, in a chat with THR, Ansari explains why he loves the show’s much-debated finale (but still won’t reveal his take) and promises that he won’t be going into exile: “I’ll write something and do something eventually, but I’m kind of content with doing nothing for right now.”

Considering how much you personally poured into making Master of None, and especially this season, how does it feel to be nominated?

You work so hard on the show and this is one of those things where you hope not just me, but that everybody gets recognized in other categories, like editing and casting. You work so closely with these people so it’s nice to see them all get recognized.

Where were you when you found out?

How would you say Dev has evolved from the beginning to the end of season two, especially compared to where he was in season one?

That depends on how you interpret the ending. I don’t want to give away my take on the ending because I want people to watch and have their own. But to me, the first season felt like it was about Dev not knowing what he wants and season two is about wanting what you can’t have. I hope that is the question that character is grappling with at the end: Do I really want this stuff that I’m pining for, or am I wanting it because I don’t have it?

Has there been any feedback about the ending that has surprised you?

What’s interesting is that I just like how it runs the gamut of some people thinking they’re together and that everything is good, and then some people saying, “Oh. They’re going to be miserable” and that maybe it’s a fantasy in Francesca’s (Mastronardi) head. I don’t think any of them are wrong; I think it’s up to you. My favorite endings are ones where when you watch it, it changes as you change as a person and you look at the material and it feels different to you. It’s cool that our finale is something that has such a range.

How much did you guys debate the ending?

We shot a lot of stuff and it really came together in the edit. I played with it forever with editor Daniel [Haworth] and co-creator Alan [Yang]. It took a while to land on that one but in the end, I really liked how jarring it was and how it was open to interpretation.

What would you say is the biggest misconception about Dev?

I’ve never heard anyone say anything that’s totally off about Dev, actually.

What did you learn about yourself as an actor when you got the opportunity to direct yourself?

You’re just worried about so many things as a director that the last thing you worry about is your own acting. I’m so familiar with the material because I’m a writer on the show, so that is almost not as tricky to me. I know what I’m trying to accomplish so I’m pretty aware of what I’m going for. What’s fun is that you’re always surprised by what happens when you’re in the moment, playing off someone like Alessandra. You adjust to those things and how they feel on the fly, and that’s the fun part.

Was there one episode, or scene, in particular that you found most challenging to act and direct in?

The whole thing we did at Storm King Art Center was hard because we had such little time. It had to be this fun set piece for me and her going between those different art installations, and we only had a little time with each one, and we had to find a moment. I was kind of scared and hoping we got it, and then saw it in the edit and was like, “Oh, we got it.” And it all came together. We lucked out with the weather. 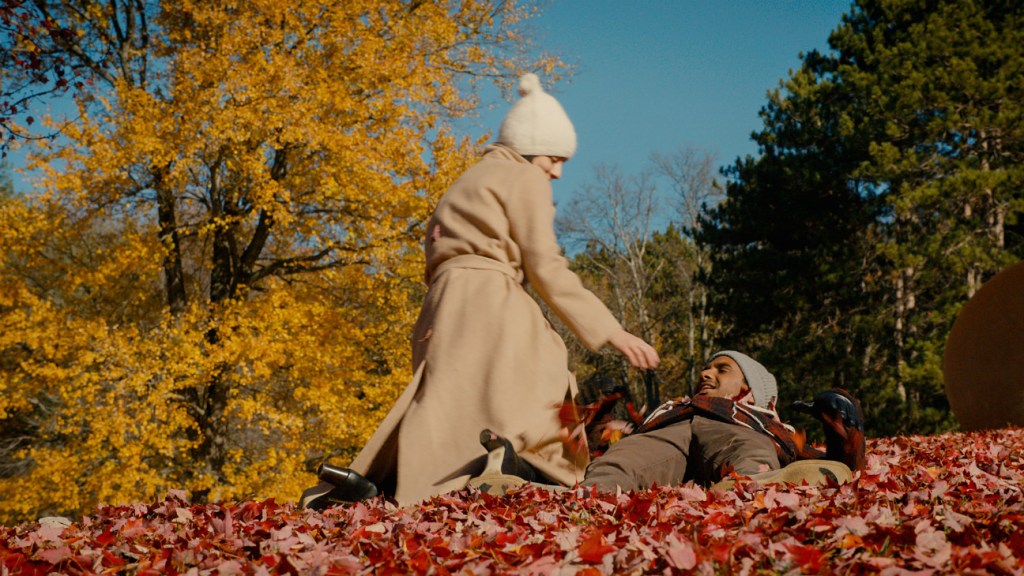 You’re also nominated for writing along with Lena Waithe for the “Thanksgiving” episode. That episode, like some others this season, experiments with you not having the most screen time. How does it feel to get recognition for that risk?

That one was really fun. I’m really happy with how it turned out. The whole time we were telling it, I knew it was special because I kept talking to Lena and she was being really honest and going into specific details about these emotional moments. It really resonated with people. I’m both excited and so happy for her getting nominated, because she put so much of herself into it.

If this were to be the series finale, are you content with the show ending here?

I’d rather we not end it here. I’d rather make one at some point in my life. I don’t know when that is, years from now or whatever. Ideally, I’d like to make more because I love the team of people and the whole process. I’m just happy I could do the show.

Are there still more stories and more to Dev that you want to tell?

There are definitely things that pop into my head, but I don’t feel like I have a full season of operations in my head right now.

Are you still stressed by being asked about the status of a season three?

Yeah, but it’s a very mild irritation. It’s not that big.

Are you enjoying saying “no” professionally at this point in your life?

It’s fun not to have anything to do. I remember reading somewhere that a movie was trying to get Jack Nicholson to do something and Jack said no and said, “I sat under a tree and read a book.” I thought, “That sounds amazing, I wish I could do that — oh, I can!” There’s no reason I can’t sit under a tree and read a book. I don’t want people to think that I’m out living the good life, it’s not about that. I don’t have to make something because I have to, I can make something when I want to and when I feel inspired.

Critic's Notebook: Un-Demonizing Muslims, One Comedy at a Time

You’ve been unplugging since the second season came out. Is there anything you miss?

It’s not a temporary thing — I don’t have any intention to get back on! I’m pretty content not checking in on that stuff. I’m spending time with family and friends, reading, watching movies I haven’t seen. I’m trying to become a little more well read and well versed in my film viewing, and I’m trying to spend my time doing things and getting away from it all.

Usually people would disconnect if their show was getting bad reviews. Since that isn’t the case, what was your motivation?

I guess I’m more along the lines of, I’m not as comfortable with the normal trajectory of the people who take on this stuff and more in the camp of people that kind of go away. Like Daniel Day-Lewis — but I’m not an incredible, incredible actor at his level! Hence, you will see when I don’t win this award.

How important is winning to you?

There’s no question that it’s way better to win than not win. But what I realize about the awards is that 20 years from now, no one remembers who won these awards. Who’s Afraid of Virginia Woolf? didn’t win best picture, but it’s the best picture! It’s amazing! Ultimately, you get these nominations and it’s amazing and helps your career, but in the long term, what really matters is the world you made and that you stand behind it. In my book, we won if in years from now we look back and are proud of the stuff we make. If we win, great. If we don’t, I feel we’ve lived up to my own standards of what we wanted to happen with the second season of the show.

Does your current time-out extend to also taking a break with acting, or just to Master of None?

If someone came to me with something for acting, I’d be down. But I haven’t read anything that has felt that exciting. I’m not going to go into exile. I’ll write something and do something eventually, but I’m kind of content with doing nothing for right now.

If you could have Dev join any other show’s universe that’s nominated – which show would it be?

It’d be pretty great if you could put Dev into the world of The Crown.

Have you had any memorable fan interactions since the season has dropped?

It’s more fun to go somewhere where no one has any idea who I am. But I was in Greece and just walking around and this guy goes, “Hey, I’m a big fan of your show.” And he just gave me a donut. He didn’t ask for a picture or anything. That was one of my favorite fan interactions.

'Master of None': How Aziz Ansari and Alan Yang Infused "Curiosity and Empathy" Into Season 2