Colton Underwood is getting his third shot at Bachelor franchise love in January.

The former NFL player, 26, will be handing out roses as ABC’s newest star of the reality dating series when The Bachelor premieres on Jan. 7. After coming up short on Becca Kufrin’s recent season of The Bachelorette — he placed fourth — and summer spinoff Bachelor in Paradise, ABC announced Underwood as the next lead back in September, and the news was met with some controversy.

The two-time franchise star’s name was plucked out of a handful of other franchise fan-favorites. On top of that, his motives were questioned when he found himself in a love triangle of sorts with Kufrin and her friend Tia Booth, who he would go on to date on Paradise. But after Underwood was eliminated from The Bachelorette shortly after going public with his virginity, he ultimately cemented a starring role for himself that he carried through his stint on Paradise.

Underwood will indeed be the first virgin bachelor to star on the franchise. Sean Lowe, the Bachelor in 2013, was a born-again virgin and remains the only Bachelor star to be married to his winner today (Arie Luyendyk Jr. is currently engaged to his winner, Lauren Burnham). The female leads of The Bachelorette have enjoyed better success rates.

Underwood’s personal choice has since became a talking point both on and off the camera, with franchise host Chris Harrison confirming shortly after his casting that Underwood’s virginity would be woven into the season’s storyline. “How does he deal with it? How do the women deal with this? It’s kind of a great social issue to conquer and tackle this season,” Harrison said. Underwood’s virginity was a big focus of the first season trailer and ABC’s marketing team has already jumped on the bandwagon. “What does he have to lose?” reads the cheeky tagline from the official season poster.

The wait is almost over…for #TheBachelor premiere, that is.
Thanks to @JuddApatow for debuting our other poster. pic.twitter.com/N9QrOsul3F

For his part, when speaking to The Hollywood Reporter before production on his season began, Underwood had hopes that he — with the help of producers — could work at removing the “stigma” around the virginity topic. “The show is known for being romantic and for being intimate and I think the stigma around virginity is that you’re not romantic or sexual. So that’s an interesting topic that, if ABC was ready, it would be something to showcase,” he said.

To further address his upcoming season, The Bachelor will premiere with a live, three-hour special where Underwood will sit down with Harrison for a discussion about the backlash he received after he was announced as the new Bachelor, his readiness to find love and become a husband and how he’ll handle the fantasy suites later on in the season.

Time will tell how ABC and the Bachelor producers handle Underwood’s season — which comes after Luyendyk Jr.’s highly criticized cycle at the height of the #MeToo movement. On Thursday, ABC released the names and pictures of the 30 women who will be vying for Underwood’s weekly, long-stemmed roses. Meet those women, according to their official bios, below.

How 'The Bachelor' Is Evolving Its Vetting Process

“Alex is the proud owner of a successful dog rescue business, which takes her all over the world in search of four-legged friends to save. To date, she’s saved almost 5000 dogs from slaughter. Luckily for Alex, rumor has it Colton is a dog lover, too.” 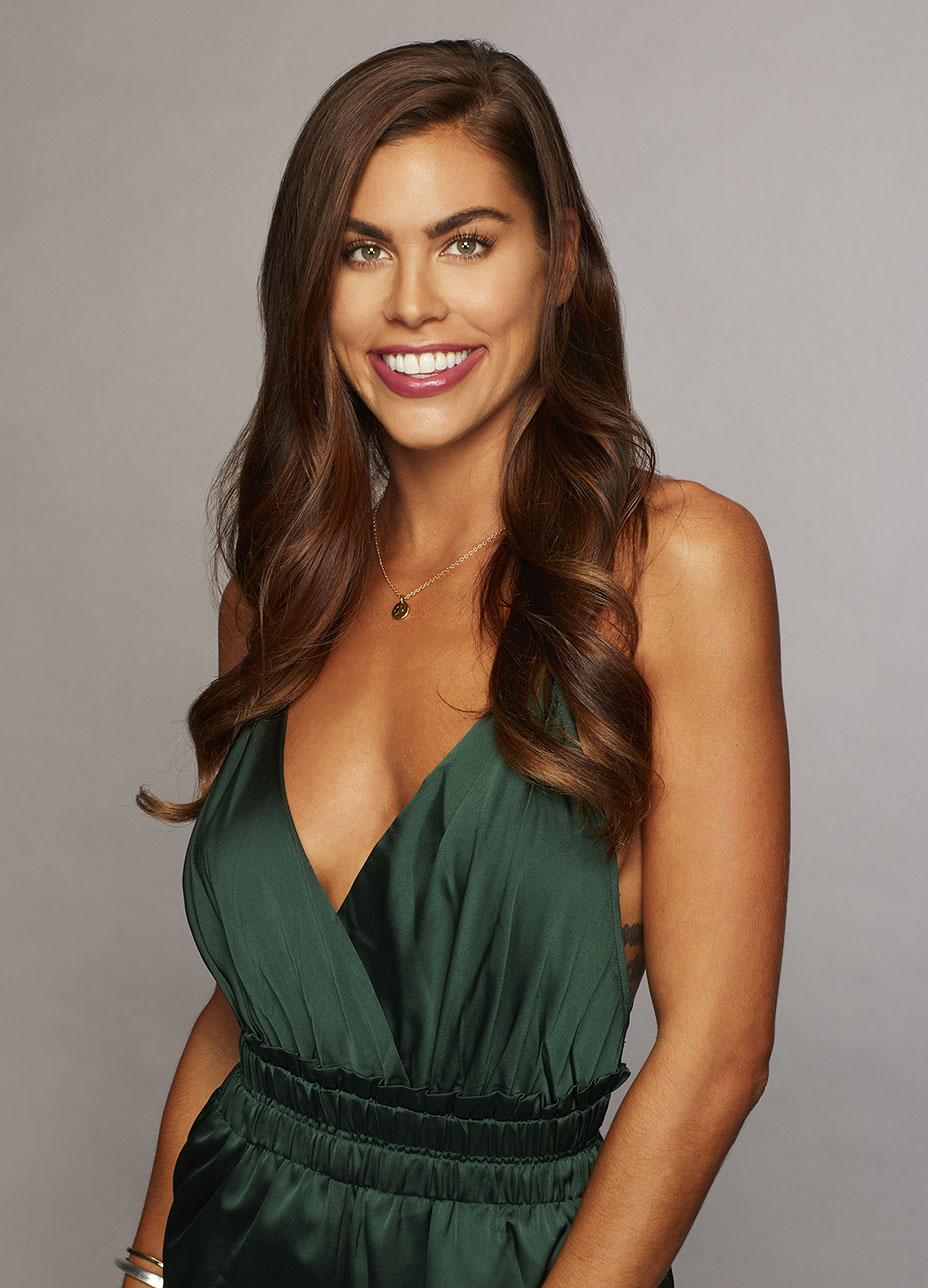 “A New England girl through and through, Alex was born on Cape Cod, went to college at University of Massachusetts and now lives in Boston. When she’s not cheering on the Patriots or the Red Sox, she’s working as an account manager for an IT staffing agency. Alex talks fast, but tends to move slowly … verrrrrrrrrrry slowly.” 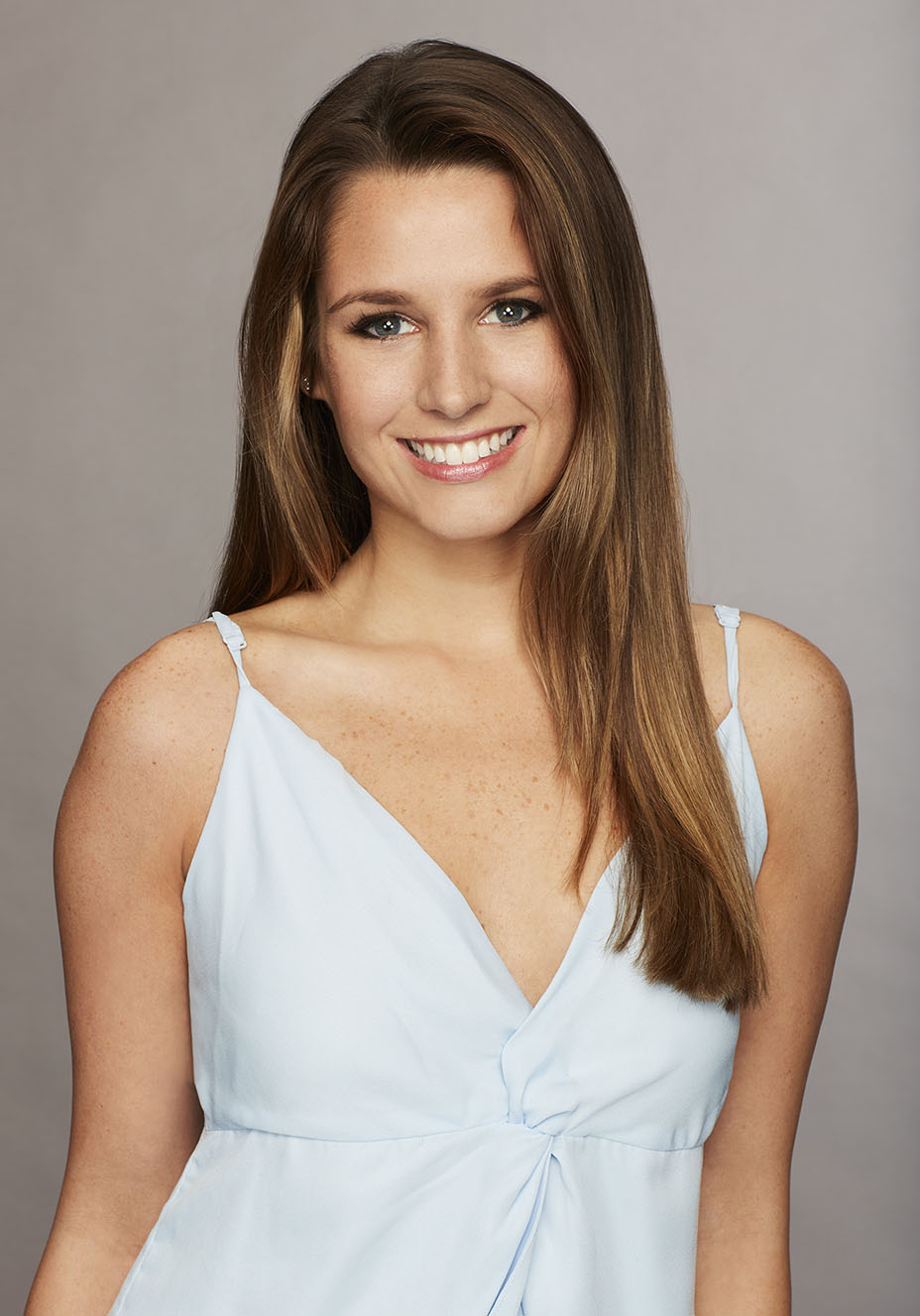 “Angelique is a small-town Jersey girl with a love of corny jokes. Here’s one for you, Angelique: Why did Colton cross the road? To meet you, of course!” 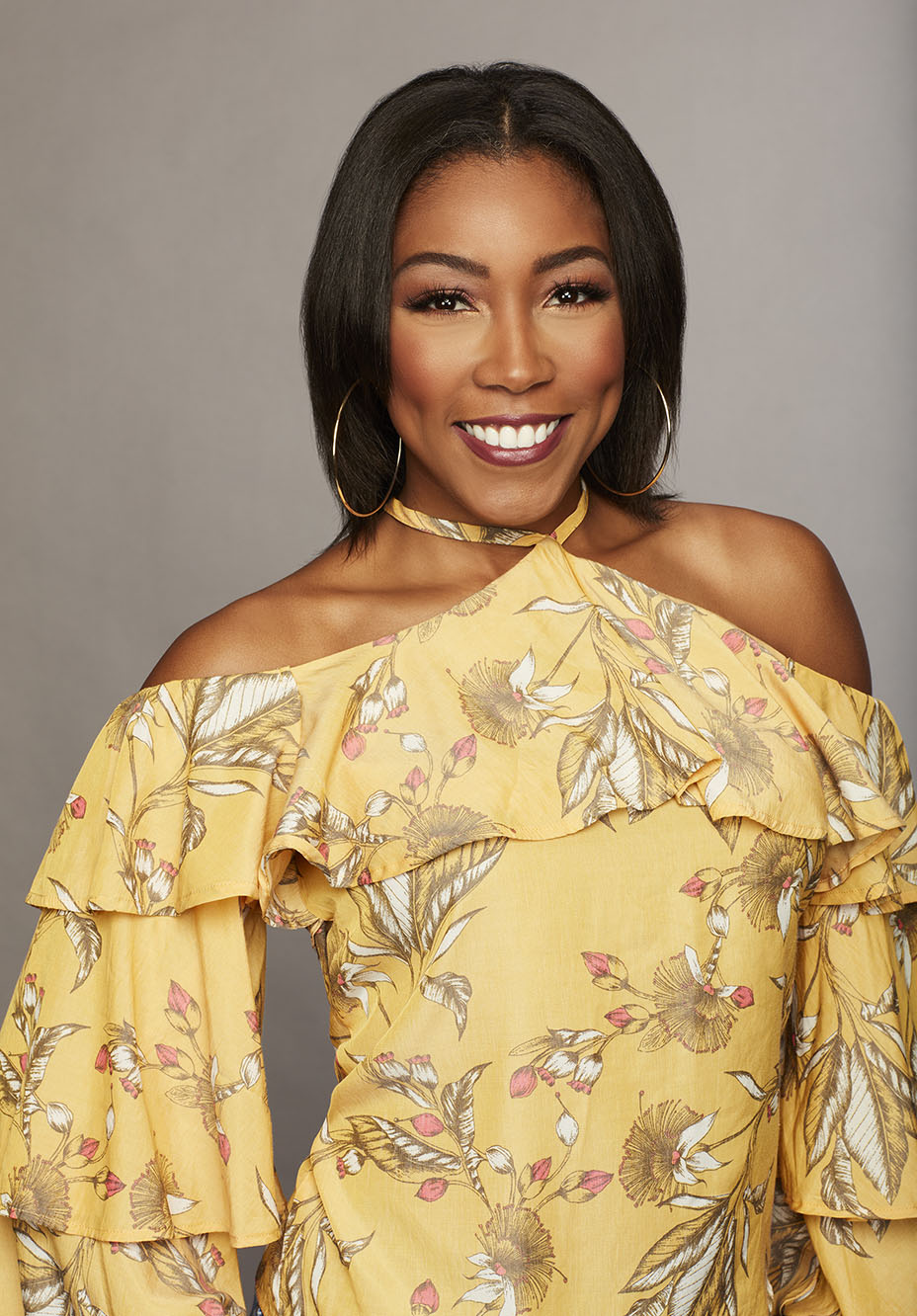 “Annie grew up on a farm in Wisconsin where she learned to ride horses. She competed in nationals for horse riding before attending the University of Alabama to study finance. Annie loves country music and swing dancing. She’s hoping to sweep Colton off his feet!” 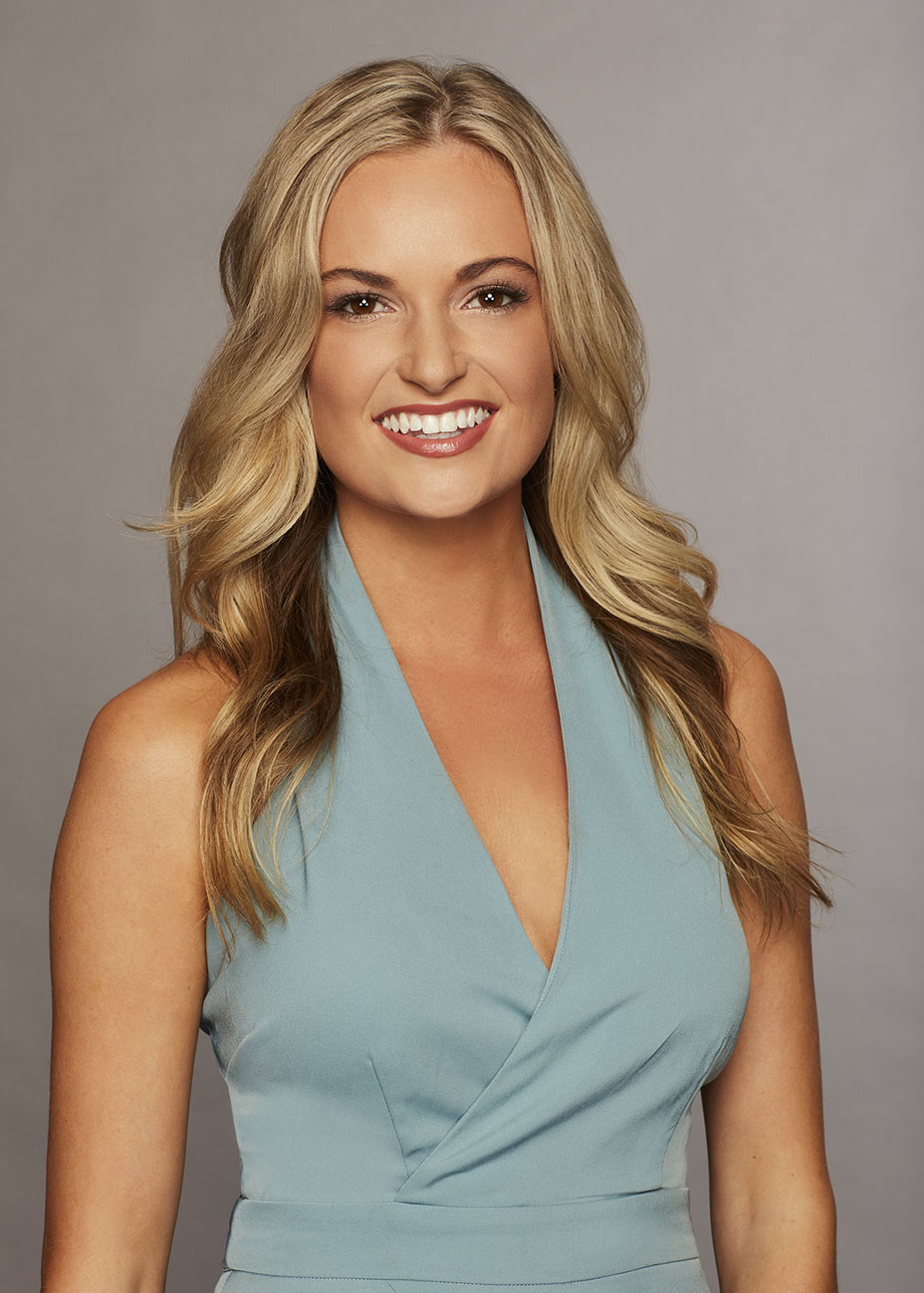 “A model from Southern California, Bri is much more than just a pretty face. She played soccer for eight years, enjoys hiking and camping and loves to hit the snowboard slopes. Her biggest dating fear? Farting too loudly. (Don’t worry Bri, we won’t tell Colton.)” 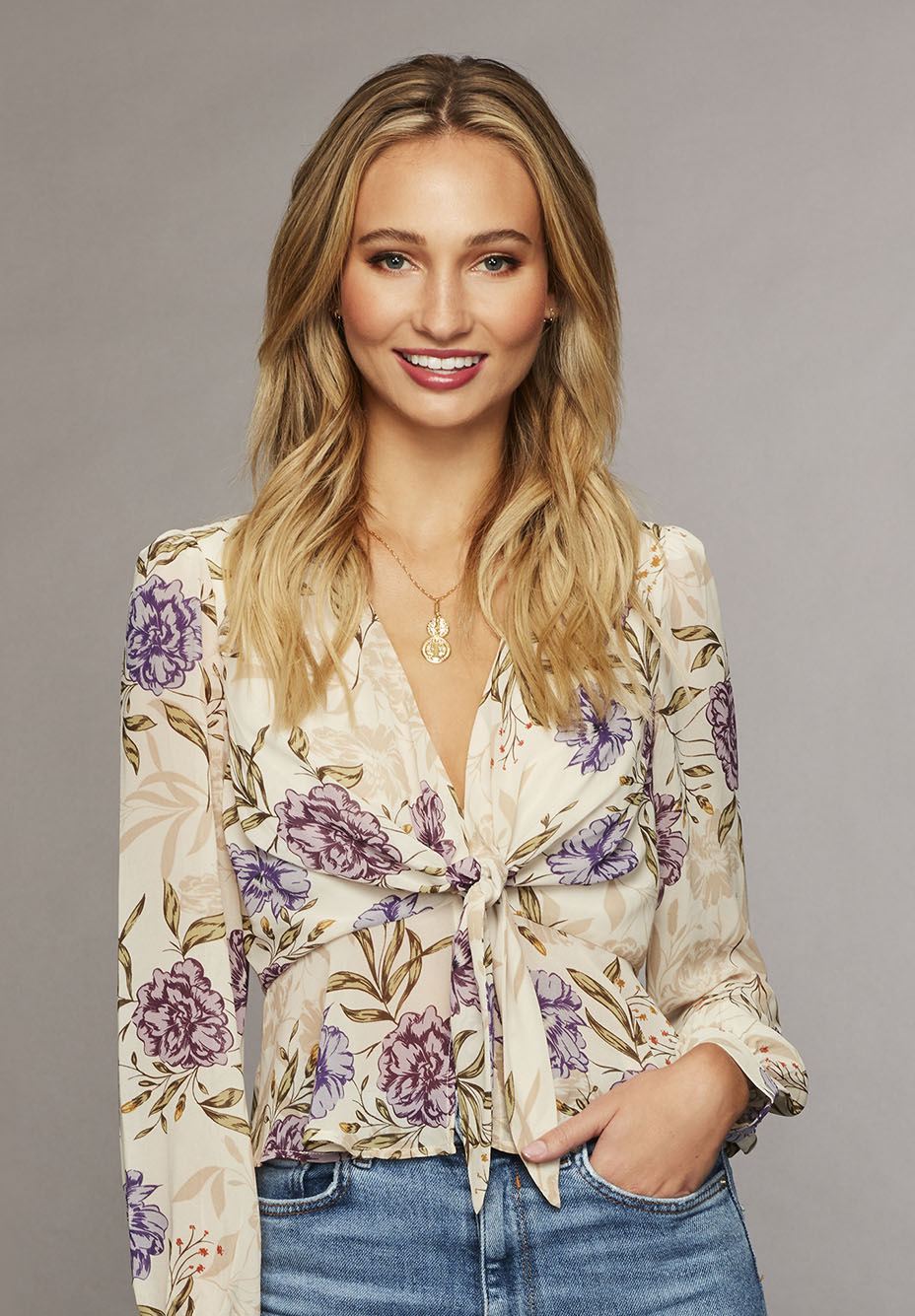 “Caelynn grew up in Fredericksburg, Virginia, and attended Virginia Commonwealth University, where she got her degree in broadcast journalism. She was named Miss North Carolina in 2018 and was the first runner-up at Miss USA. But Caelynn is not your typical beauty queen. She once flew to Japan for a first date! Luckily, she’ll only have to travel to the Bachelor mansion to meet Colton.” 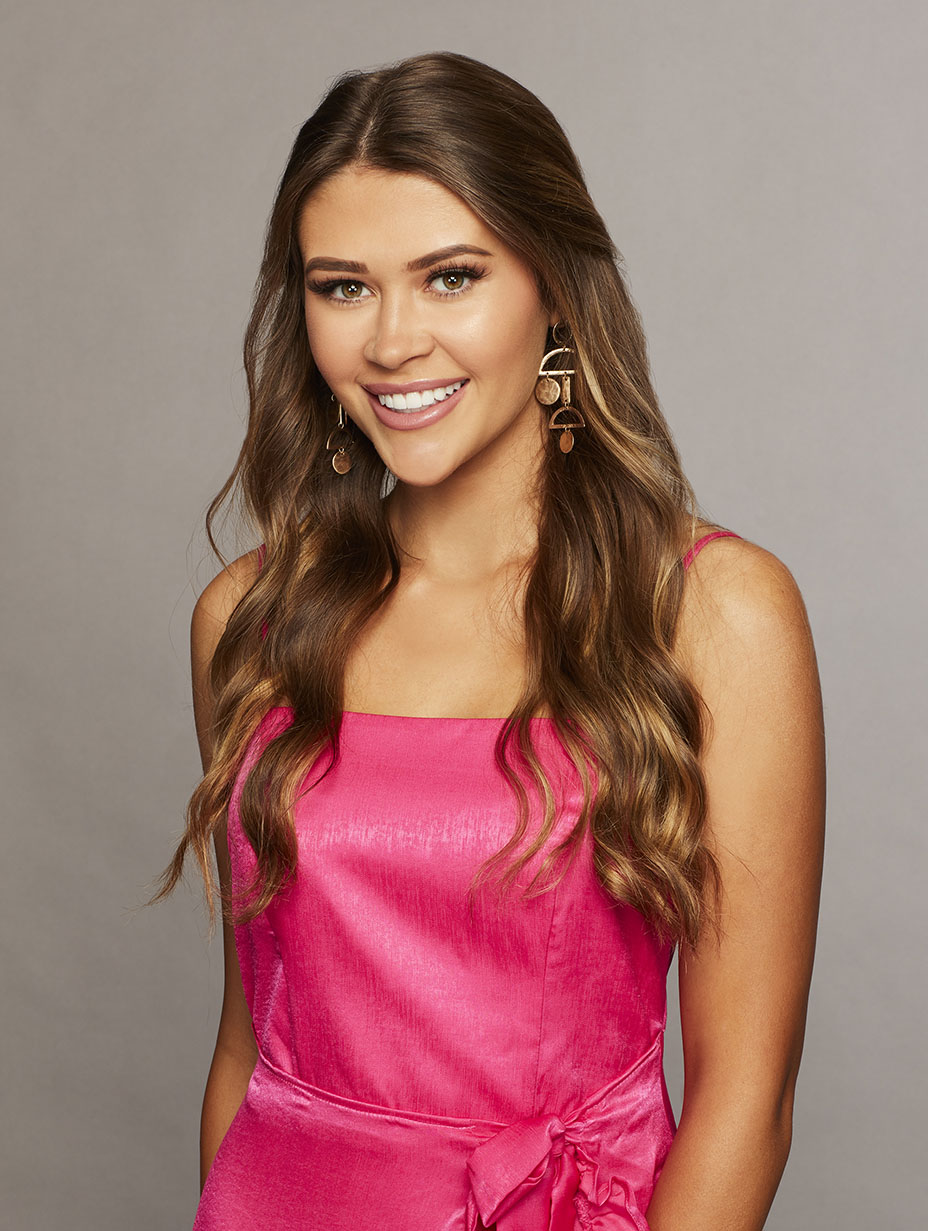 “Caitlin is a successful realtor from Toronto, Ontario, Canada, who enjoys photography, painting and singing in the shower. Here’s hoping she musters the courage to belt out a few tunes in front of Colton … or, maybe not?” 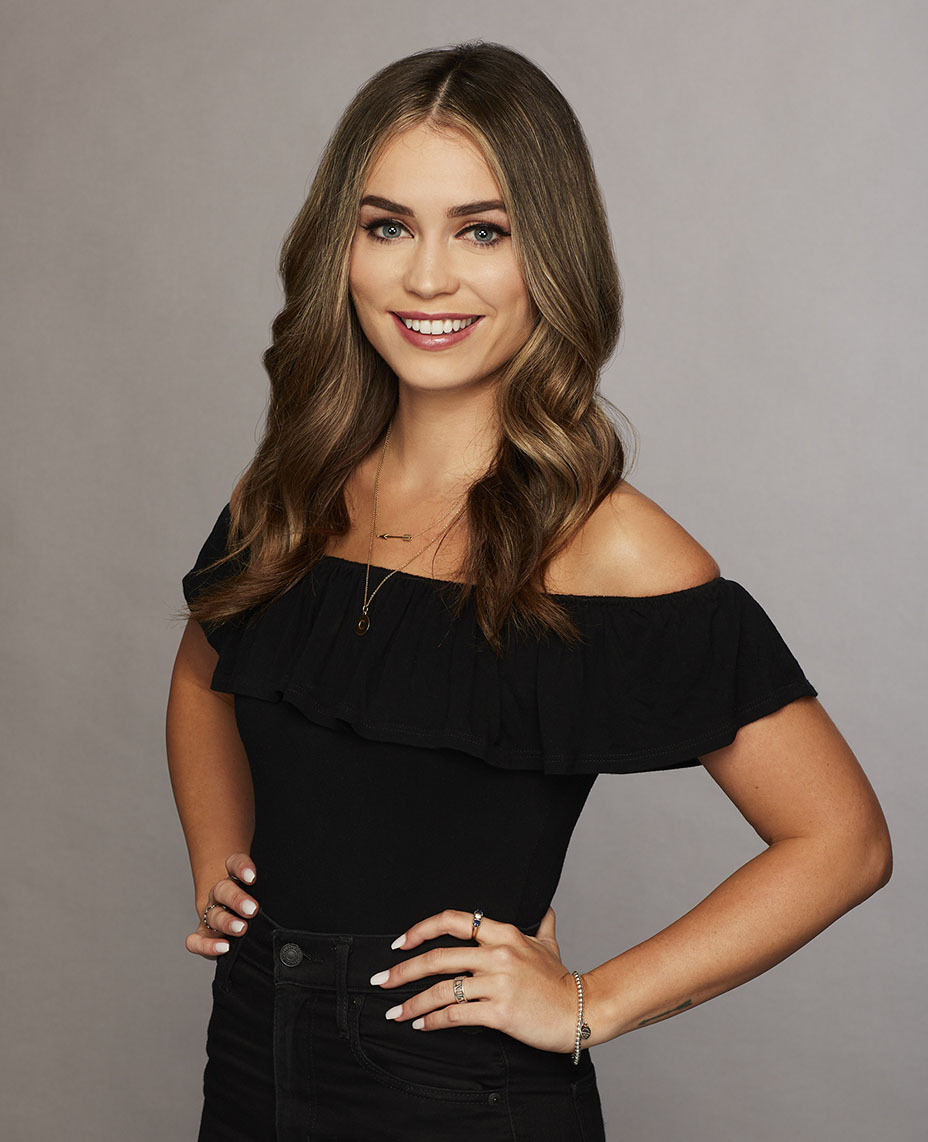 “A true native Californian, Cassie grew up at the beach and is an avid surfer. She is currently completing her degree in speech pathology and hopes to one day open up a private practice to work with kids. Maybe, in the meantime, she can teach Colton the language of love.” 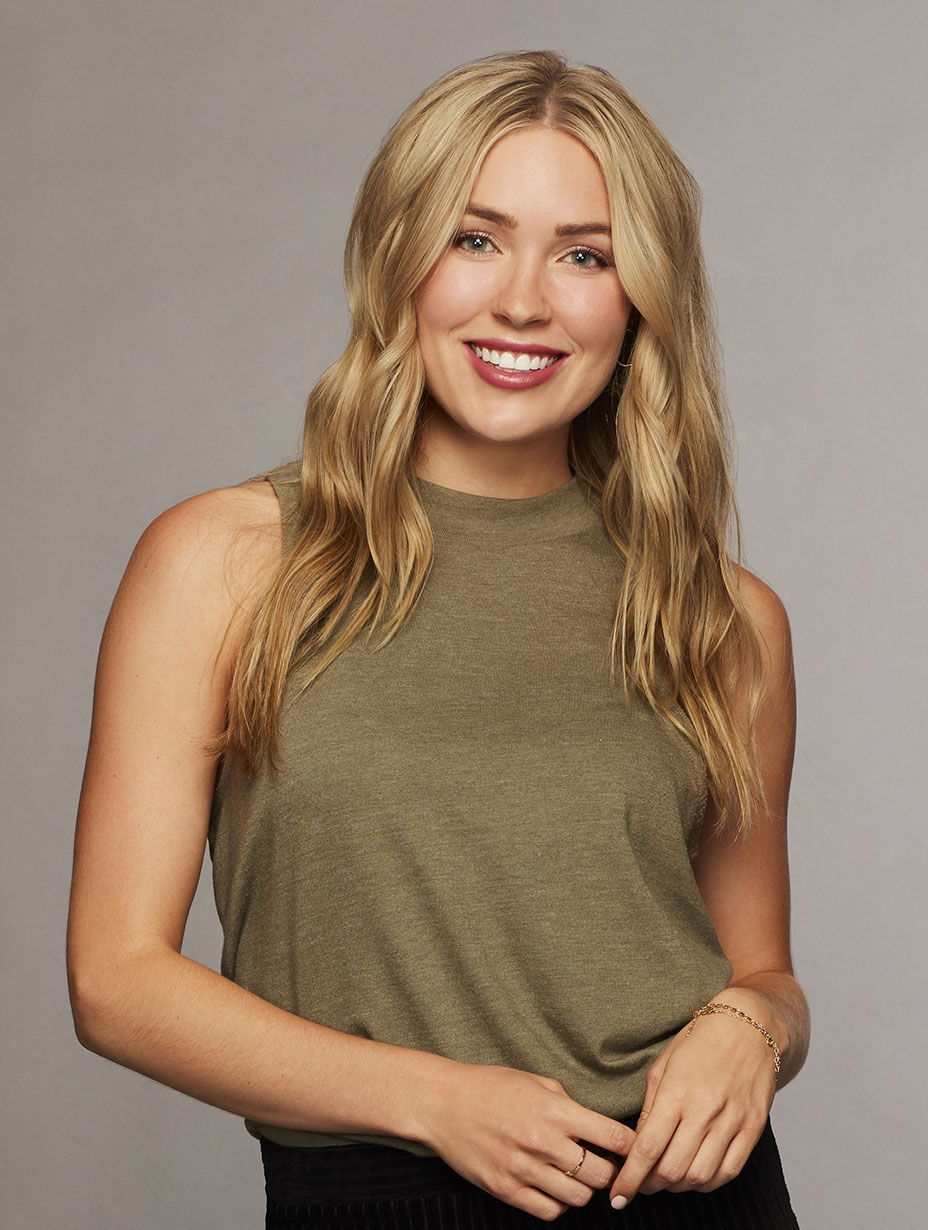 “By day, Catherine is a successful commercial real estate agent. By night, Catherine is DJ Agro — an up-and-coming hip-hop DJ making a name for herself on the Ft. Lauderdale club scene. Along with her dog daughter, Lucy, Catherine is hoping to spin her way into Colton’s heart.” 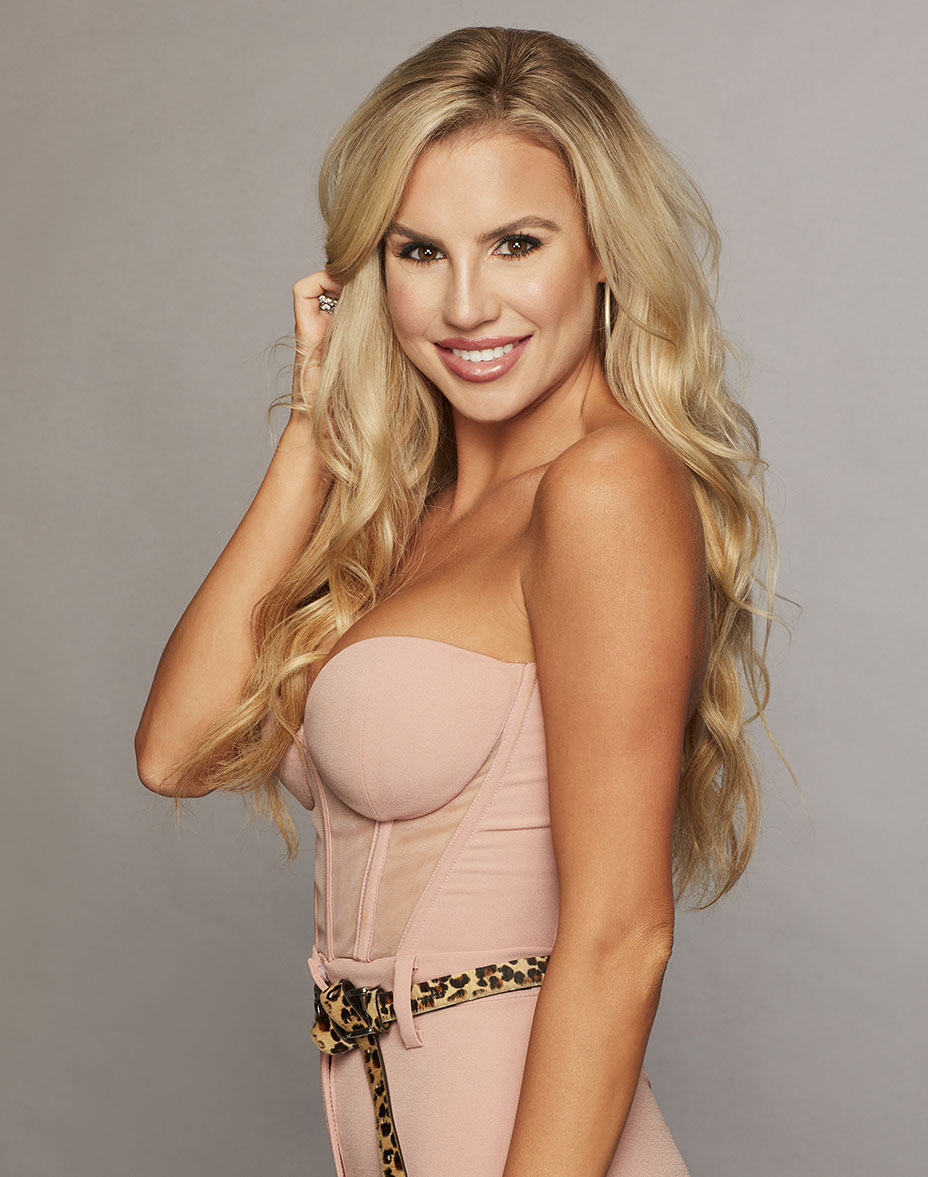 “Courtney was born in Wiesbaden, Germany, but grew up in McDonough, Georgia, with four younger siblings. She turned her passion for food and cooking into a successful catering business, crafting healthy meal plans for athletes. Now she’s just hoping she has the recipe for love with Colton!” 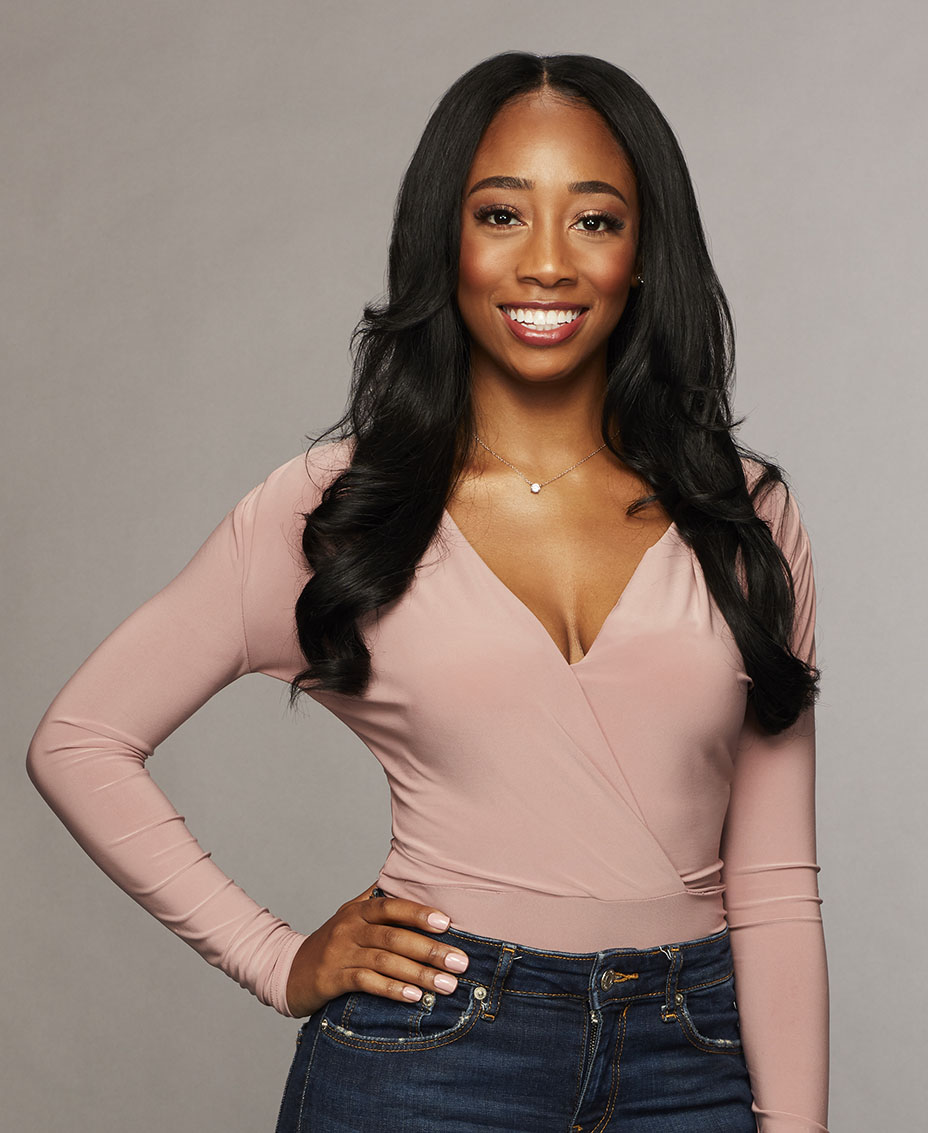 “Demi grew up in rural Texas and is a proud country girl. She loves ATVing, fishing and watching WWE. She can also drive a stick shift. She’s ready to put her pursuit of Colton into overdrive! Keep an eye on this one, Bachelor Nation!” 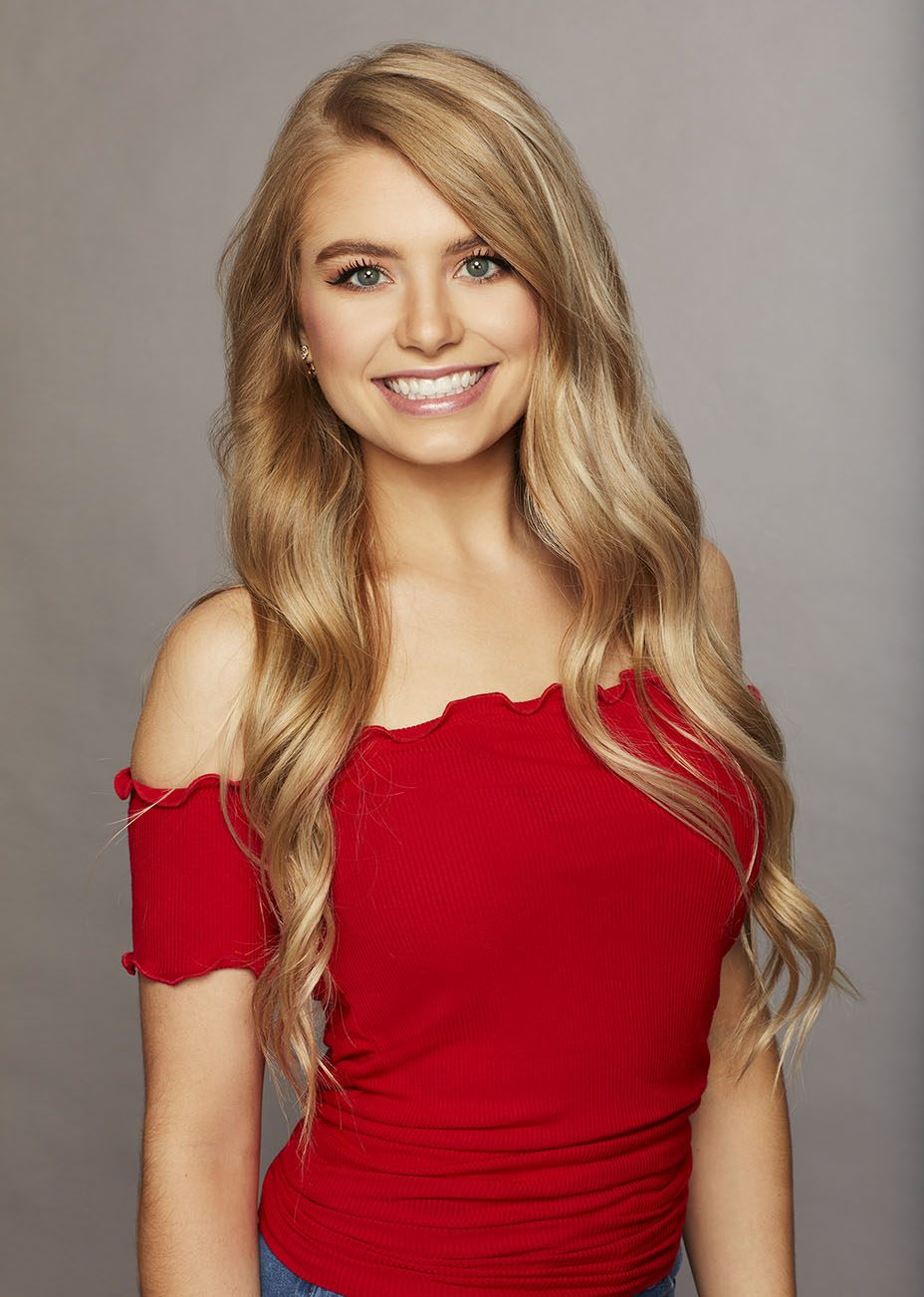 “Devin graduated from Arizona State University with a Master of Arts in sports journalism. She currently works as a broadcast journalist for a local news station in Medford, Oregon. When she’s not reporting, you can find her doing her best sun salutation in yoga class. Namaste, Colton!” 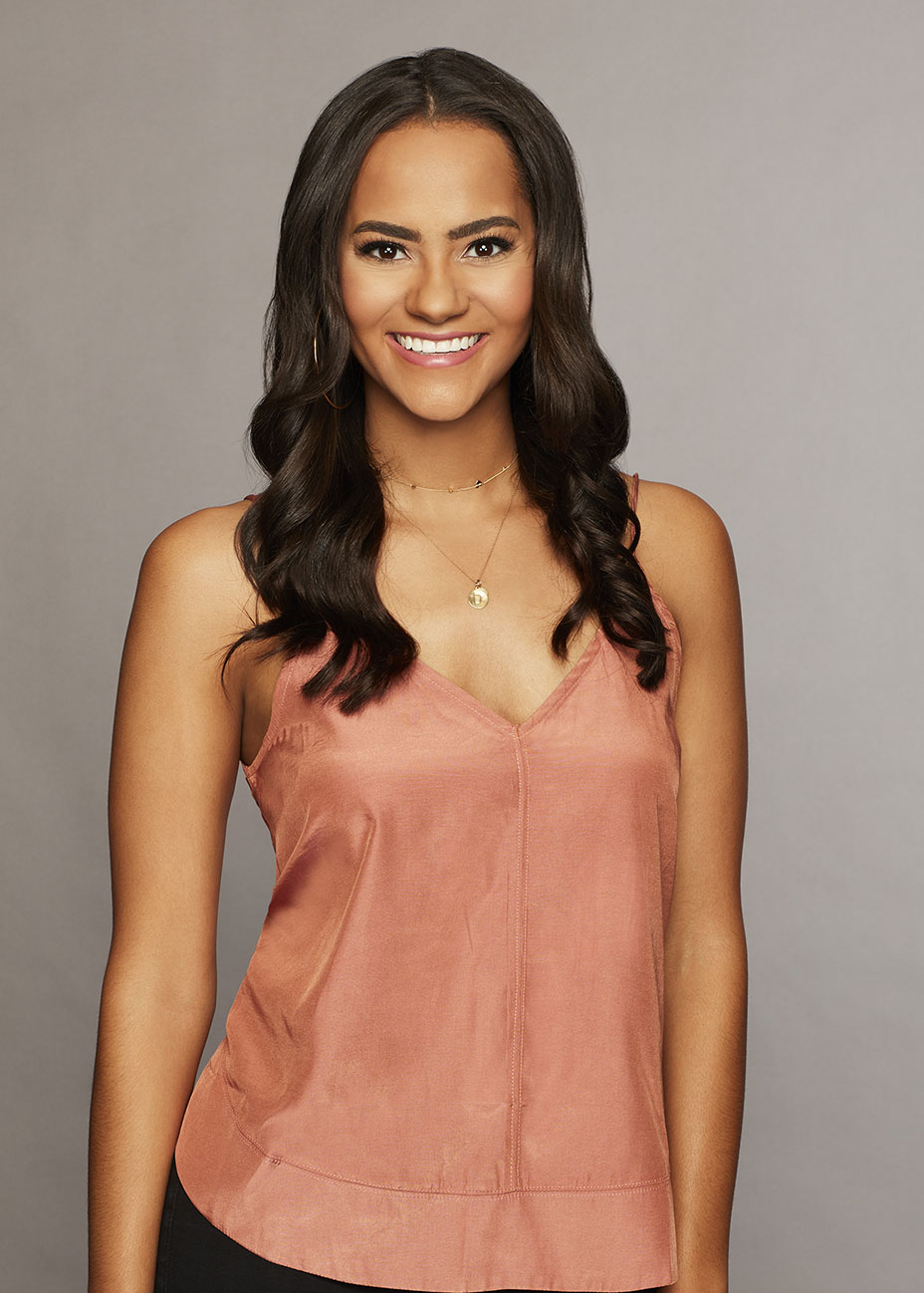 “Elyse grew up outside of Anchorage in Soldotna, Alaska, where she spent her childhood ice skating and snowmobiling. She found a warmer climate when she relocated to Scottsdale, Arizona, where she now works as a makeup artist. She also enjoys hiking, reading and spending time with friends over good food and wine.” 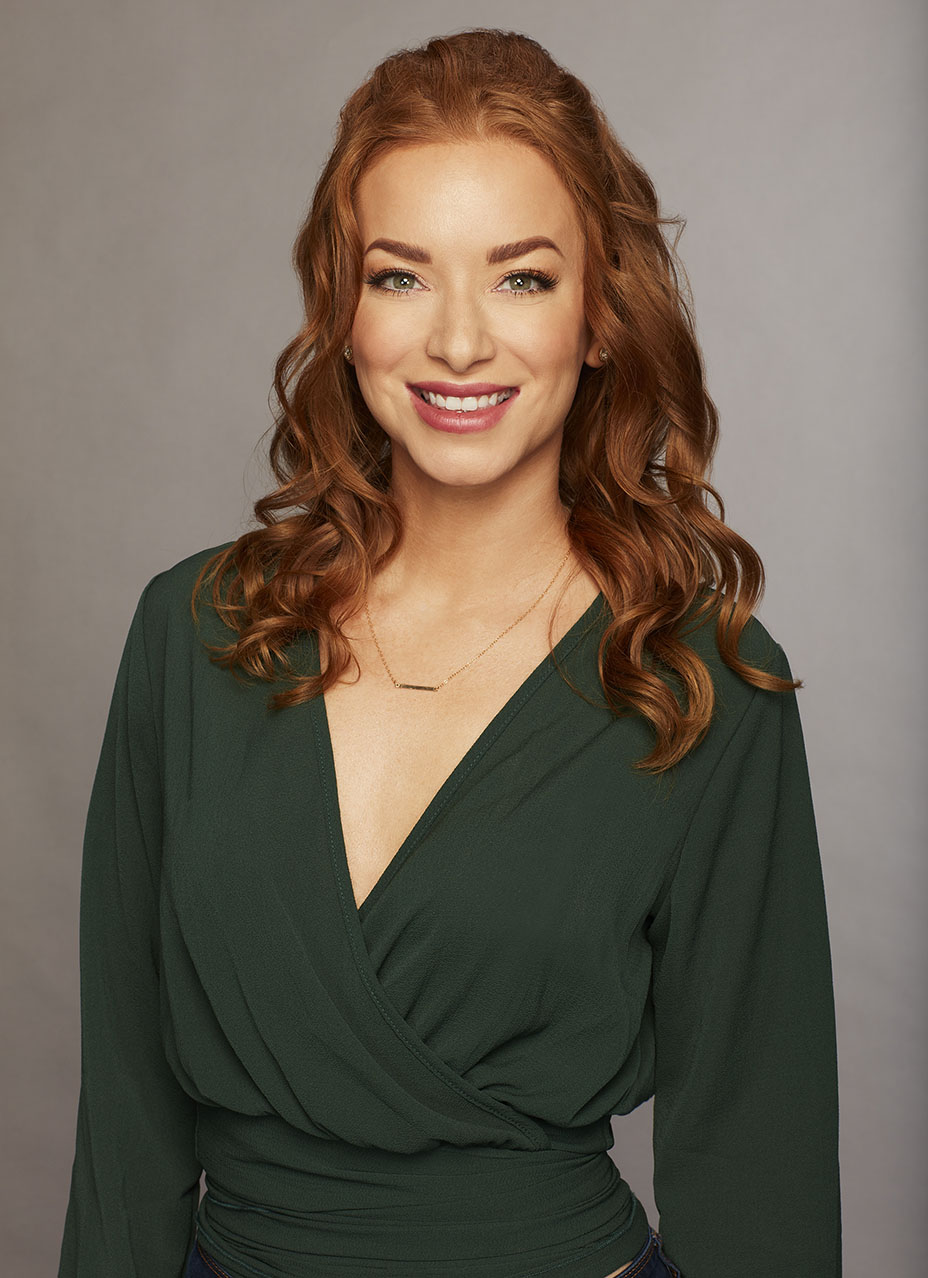 “The Nut,” as she’s known to her friends, is a ball of energy with a great sense of humor. Erika boasts that one of her talents is being able to eat whatever she wants without gaining weight. What’s your secret, Nut?” 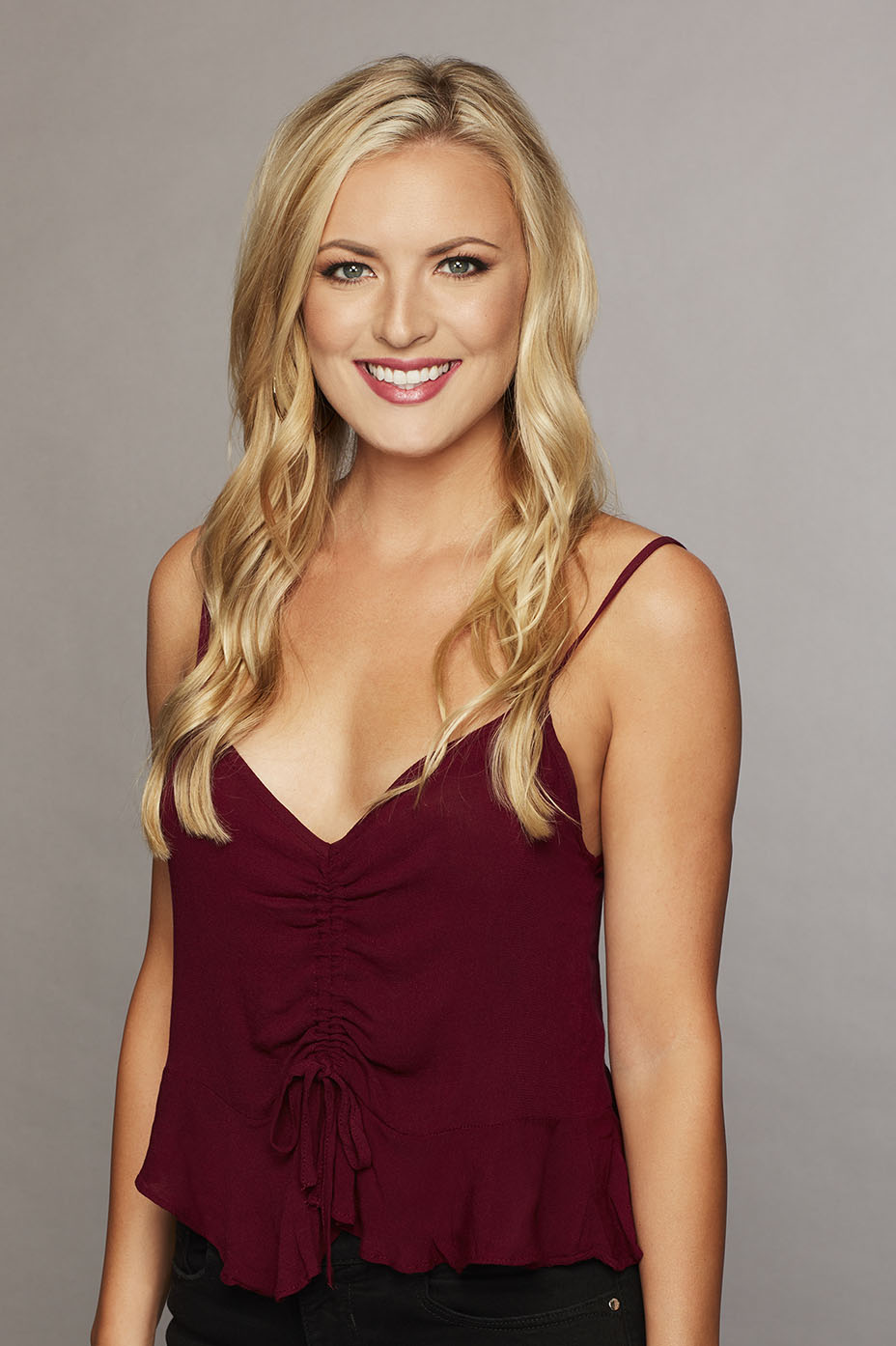 “Erin works full time for her stepmother’s home improvement business. She’s not afraid to get her hands dirty, but cleans up nicely. When she’s not working, Erin enjoys ballroom dancing (as long as it’s not too late of a night). Erin also loves expensive shoes but admits she can do a better job keeping track of them. She loves pumpkin spice lattes.” 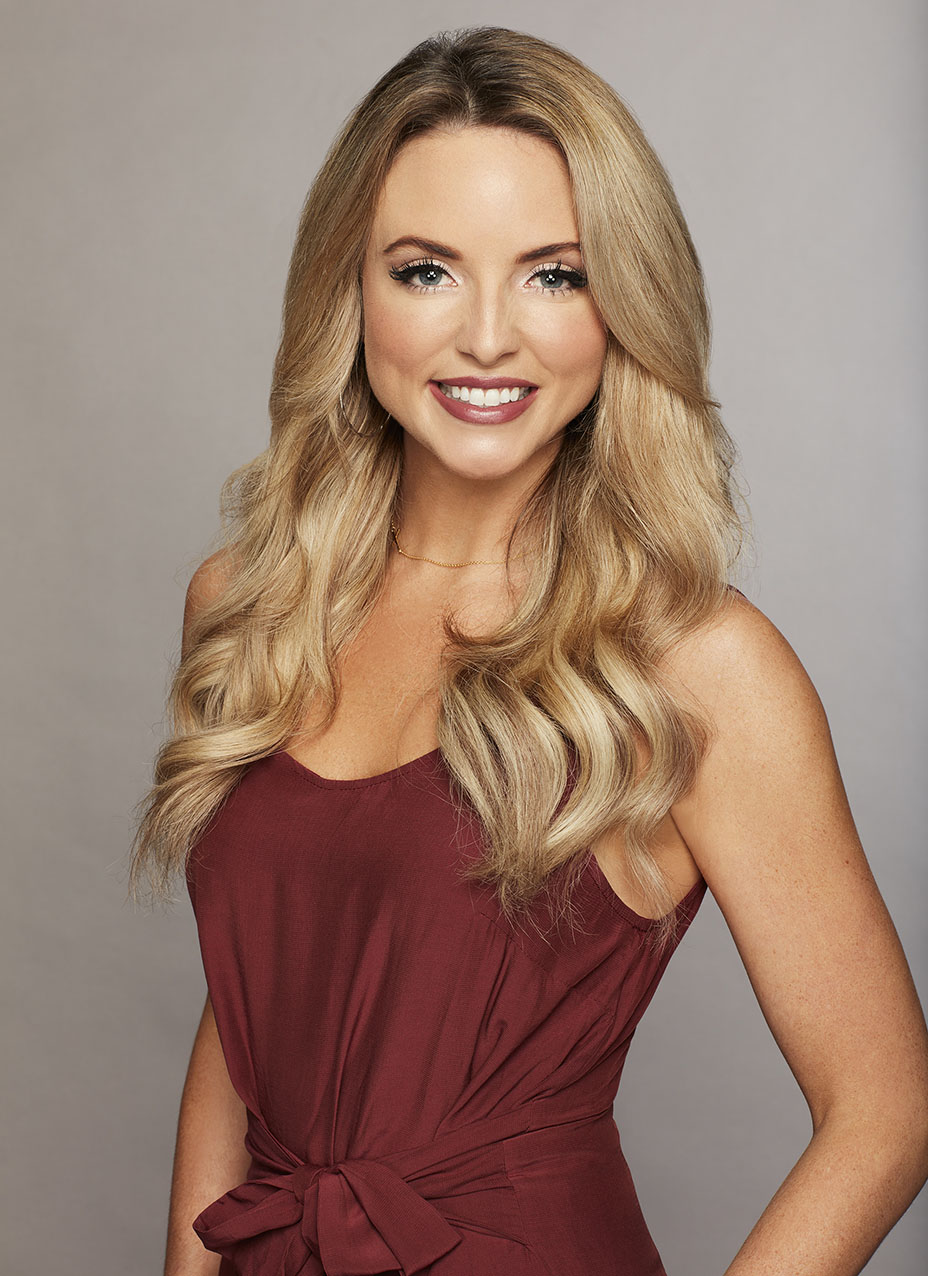 “Born and raised in Tuscaloosa, Alabama, Hannah was bred to be a proud member of the Alabama Crimson Tide. Following in her parents’ footsteps, she recently graduated from the University of Alabama with a degree in communications. She currently works as an interior designer and never misses an Alabama football game. Oh, and in her spare time this year, she won the title of Miss Alabama USA 2018. Roll Tide, Hannah!” 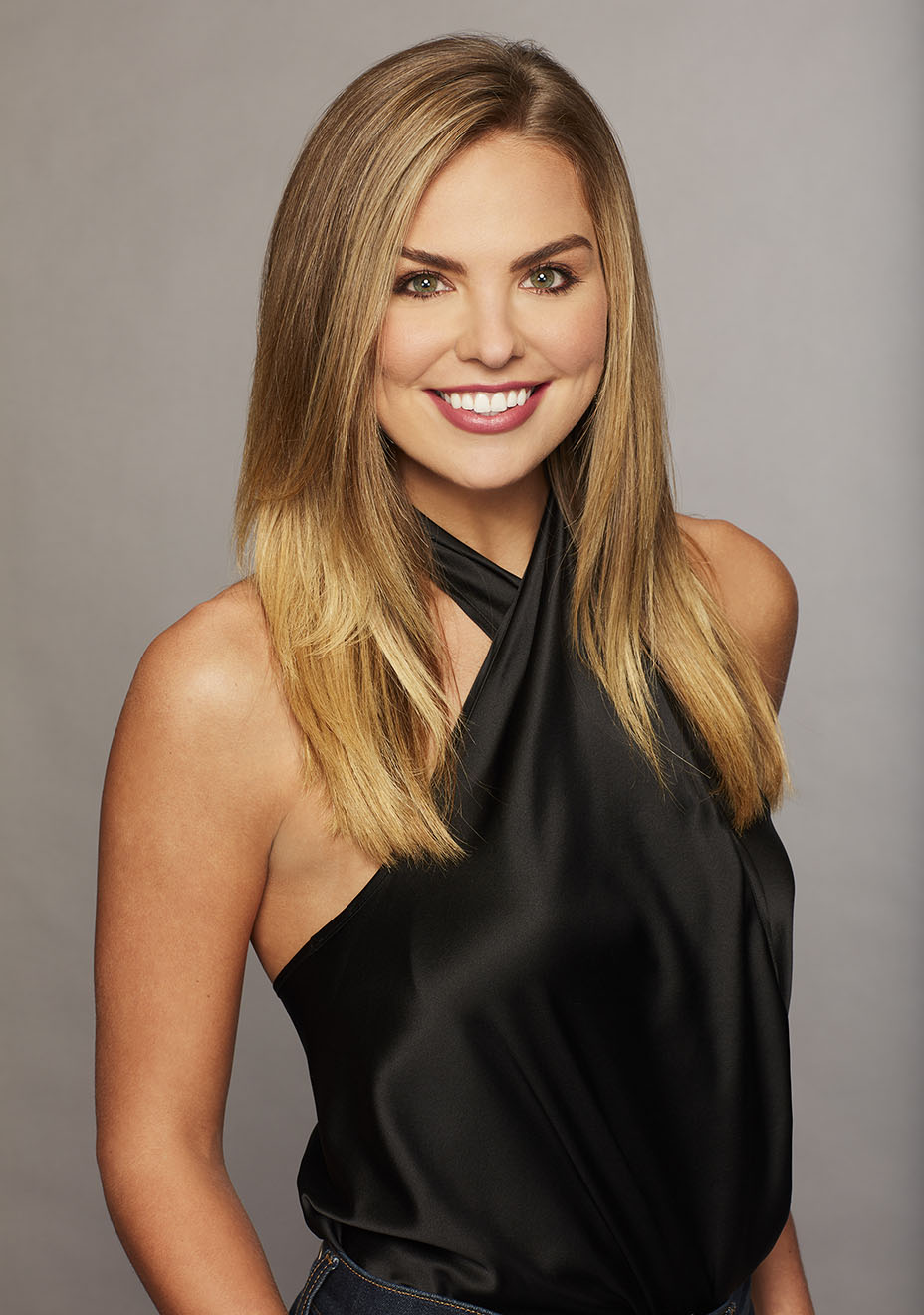 “This sweet Southern belle definitely isn’t camera shy — she’s both the photographer and model for her burgeoning social media business. Apart from planning the photo shoots for her next posts, Hannah enjoys being a foodie and glamping. Hopefully Colton “likes” what you’re putting down, Hannah!” 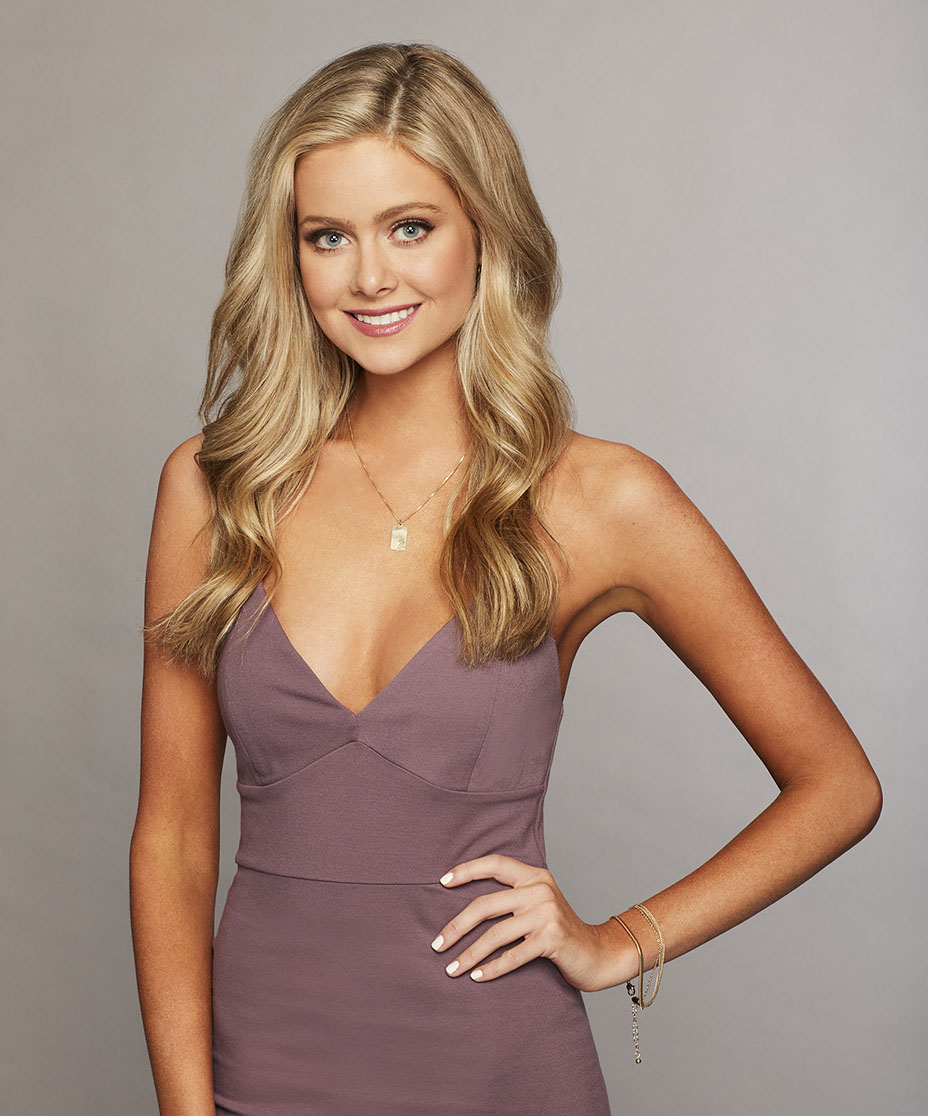 “Born and raised in San Diego, California, Heather is a Southern California girl through and through. She’s a thrill-seeker who enjoys bungee jumping, skydiving and river-rafting. But out of all the thrilling things Heather’s done, there’s still one thrill she’s yet to experience — she’s never kissed a boy!” 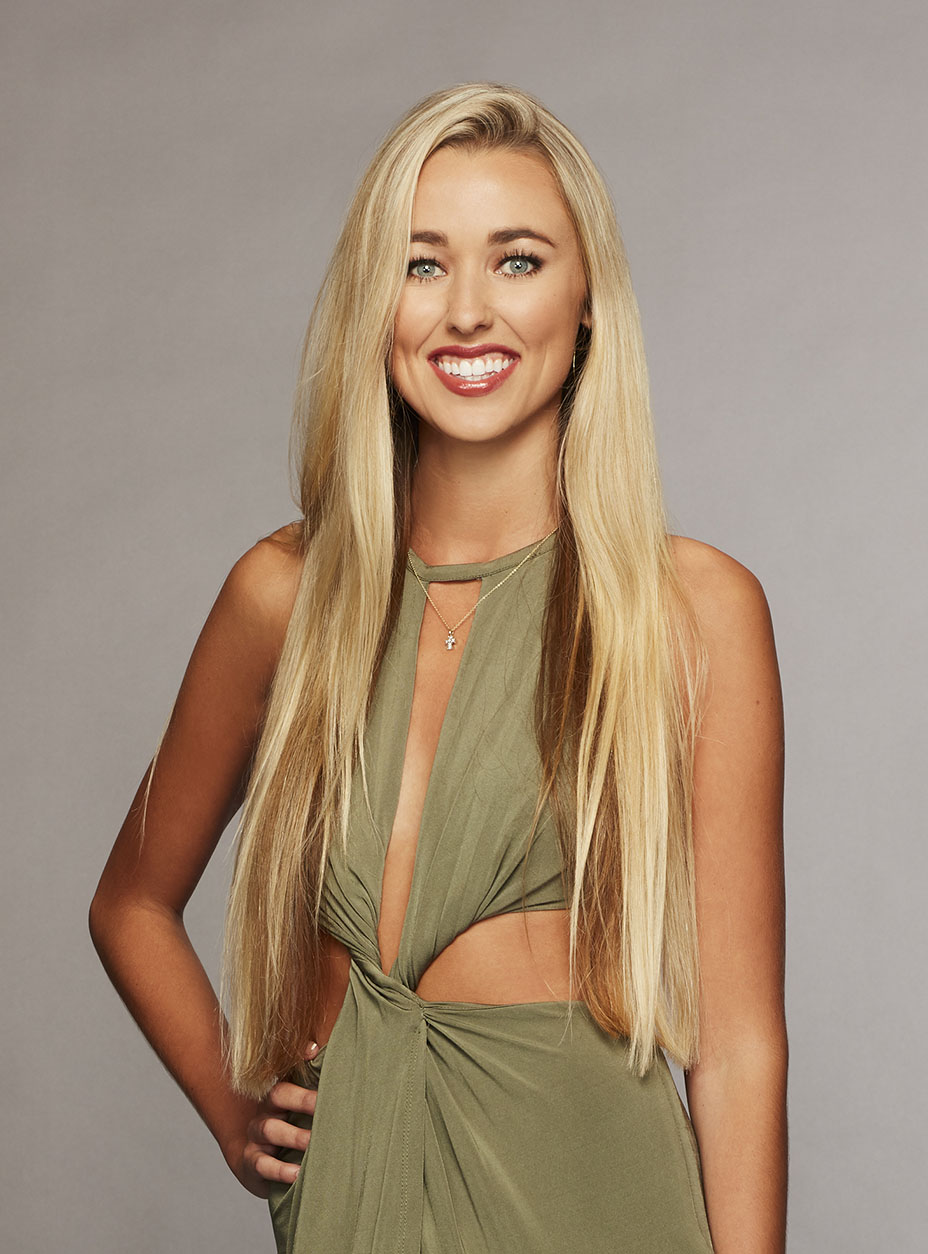 “A native to Los Angeles, Jane is a free spirit with infectious energy. As a social worker, she uses her positive vibes and good nature to help care for seniors at an elderly day care facility. When she’s not at work, Jane loves spending time with her mom and dog, Bella.” 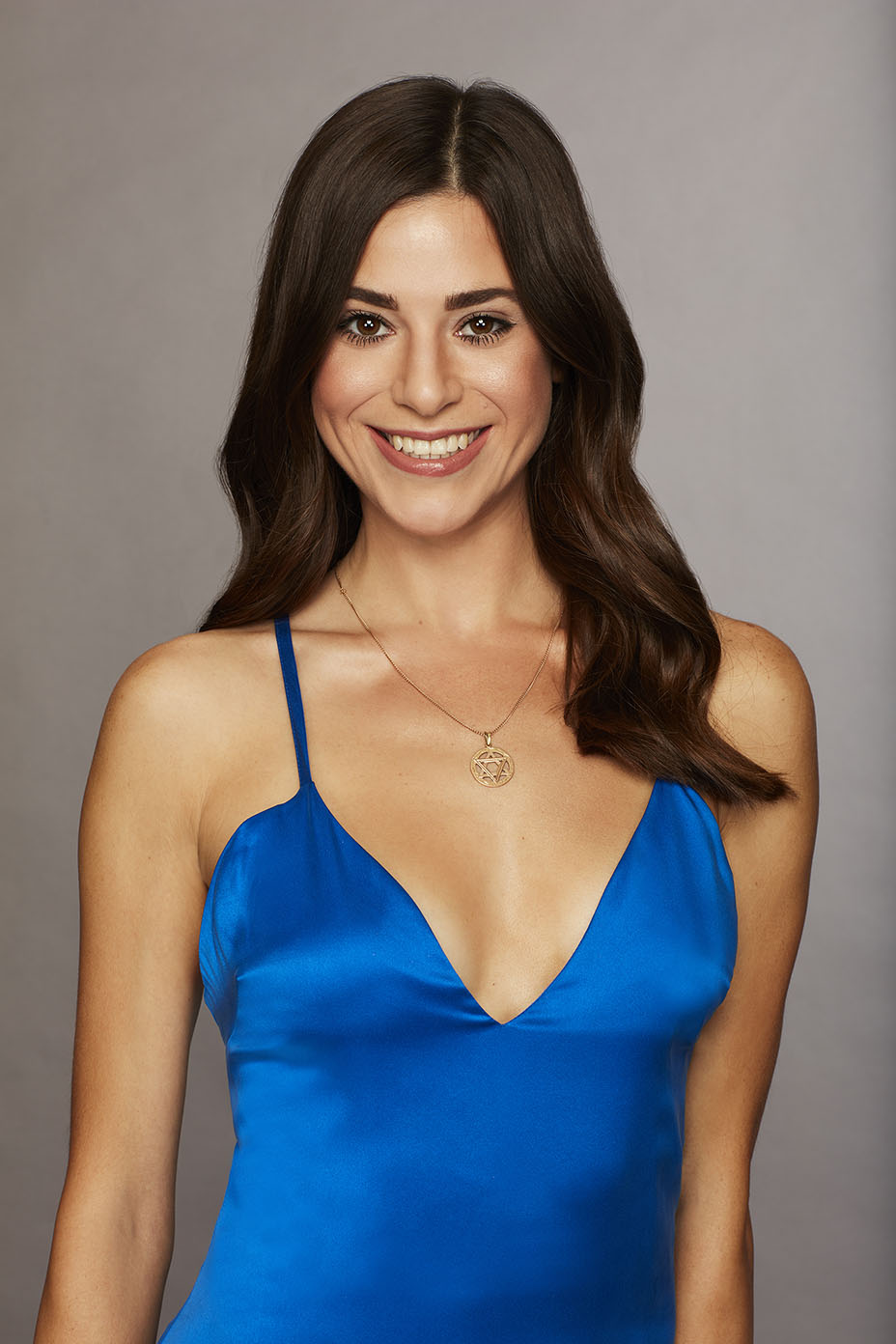 “A lifelong dancer, Katie attended Louisiana State University, where she competed on the dance team. After moving to Los Angeles to work as a medical sales rep, Katie settled in Sherman Oaks, where she enjoys yoga and sushi. She still dances in her spare time and hopes to teach Colton a few moves.” 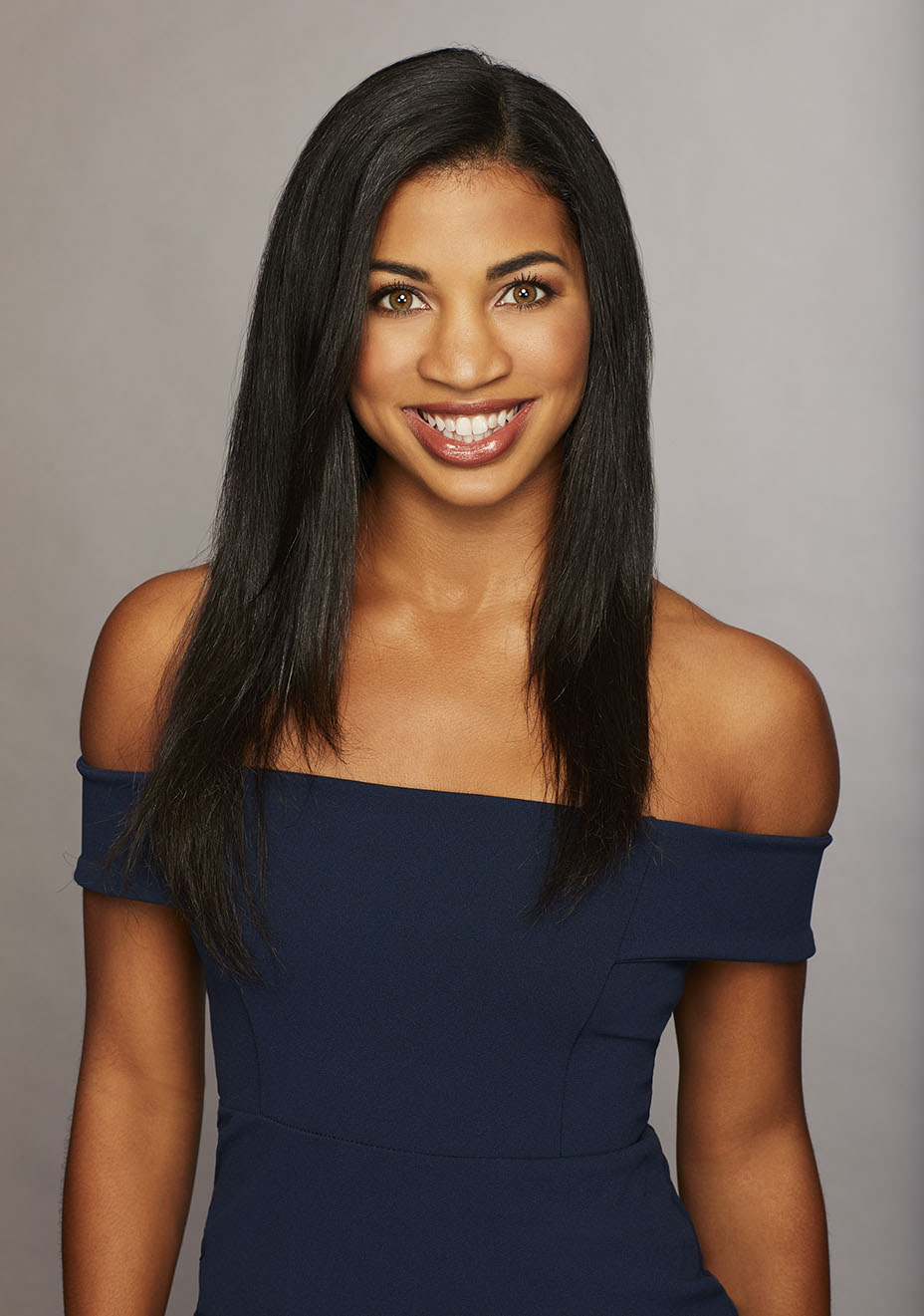 “This beautiful and spunky California girl works for her dad’s dentistry business as a dental hygienist. She loves hiking, reading, cooking and swimming. Her one deal breaker? Colton better floss.” 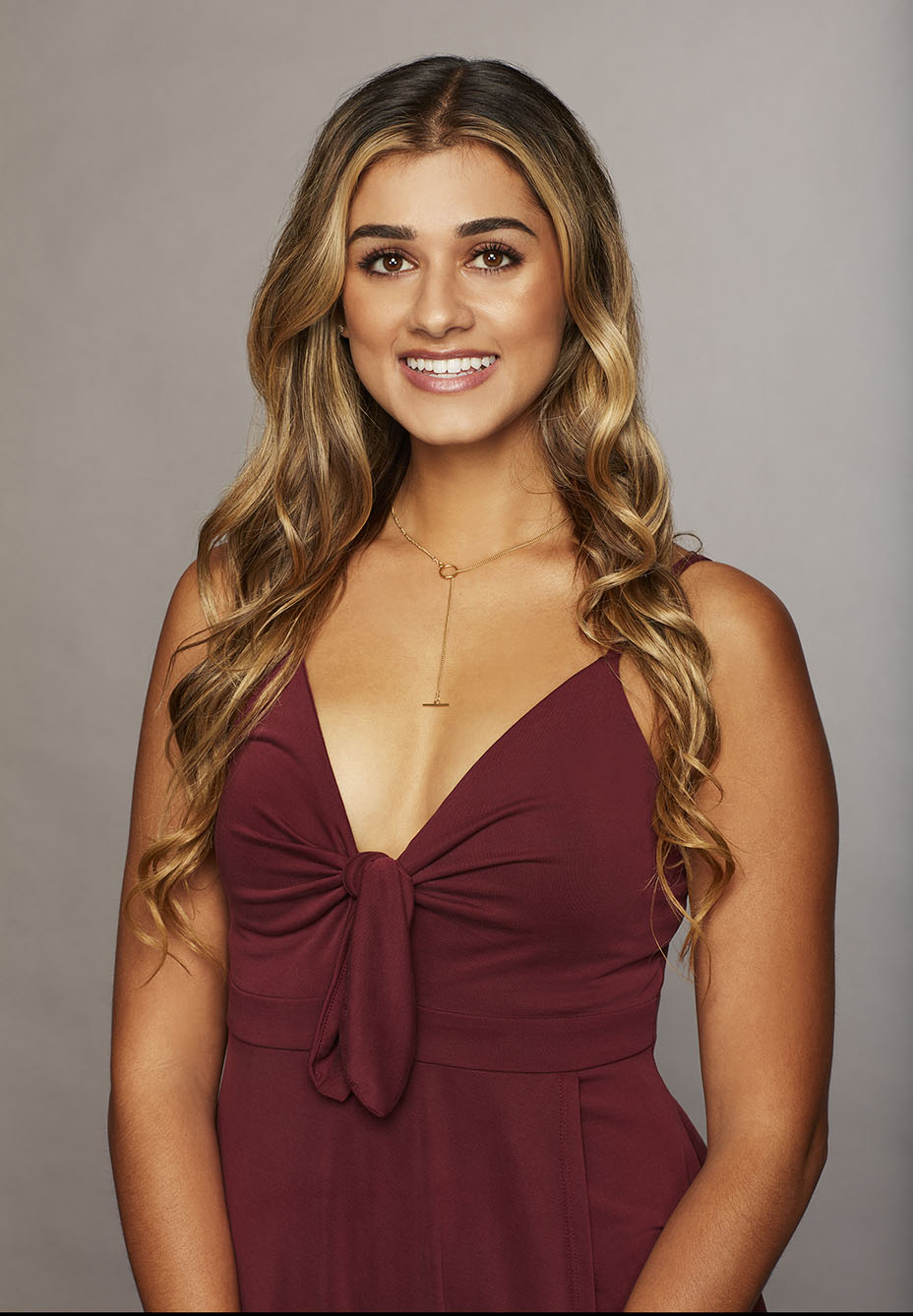 “Originally from El Paso, Texas, this beautiful girl next door once moved to Spain on a whim. Luckily for Colton, she moved back and is ready to put her heart on the line for love.” 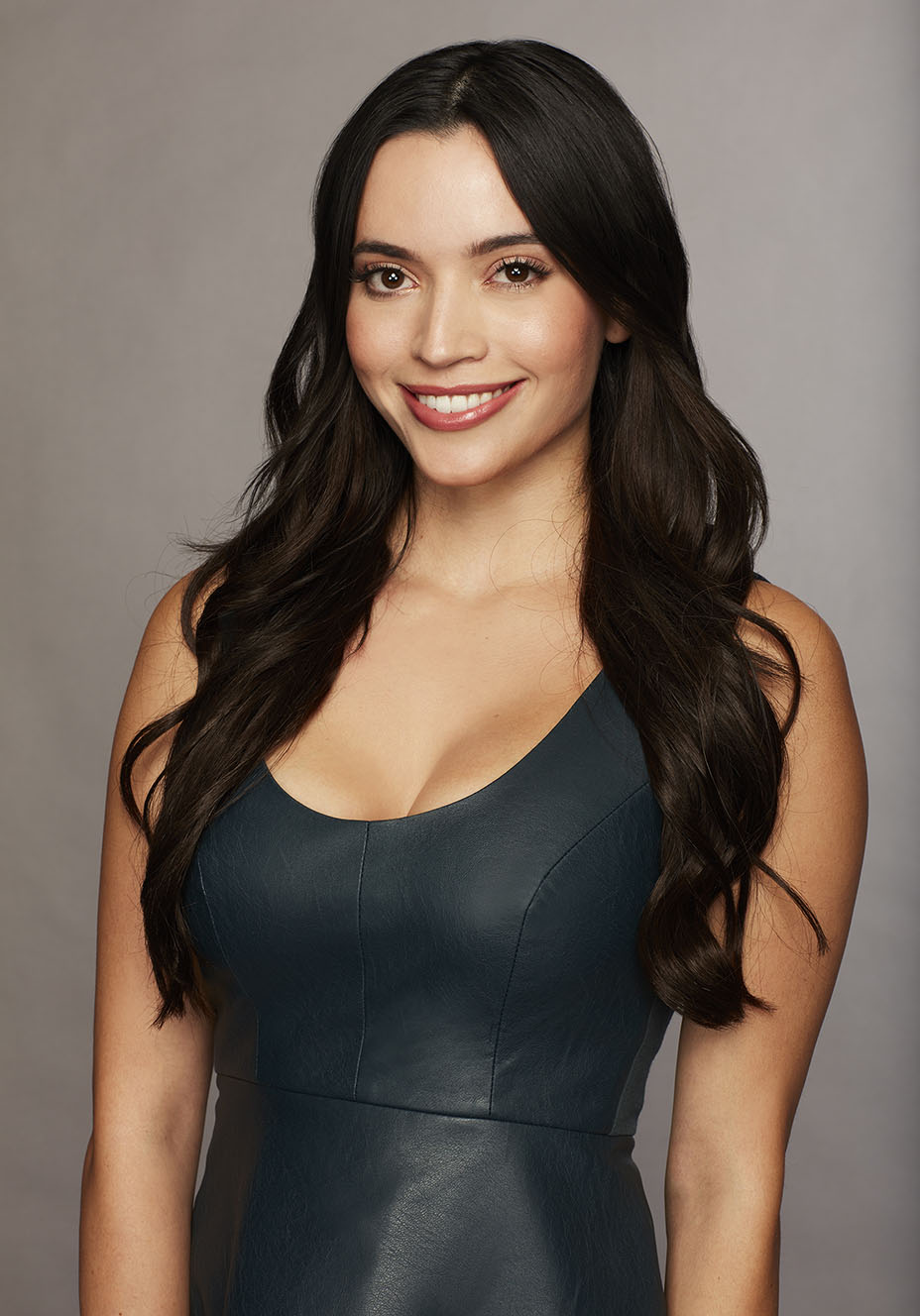 “Nicole is a fun and energetic Miami native who loves salsa dancing and singing a capella. Her family is originally from Havana, Cuba, and she’s extremely proud of her roots. She lives at home with her brother, mom and grandma, and can’t wait for Colton to try some of her grandma’s cooking.” 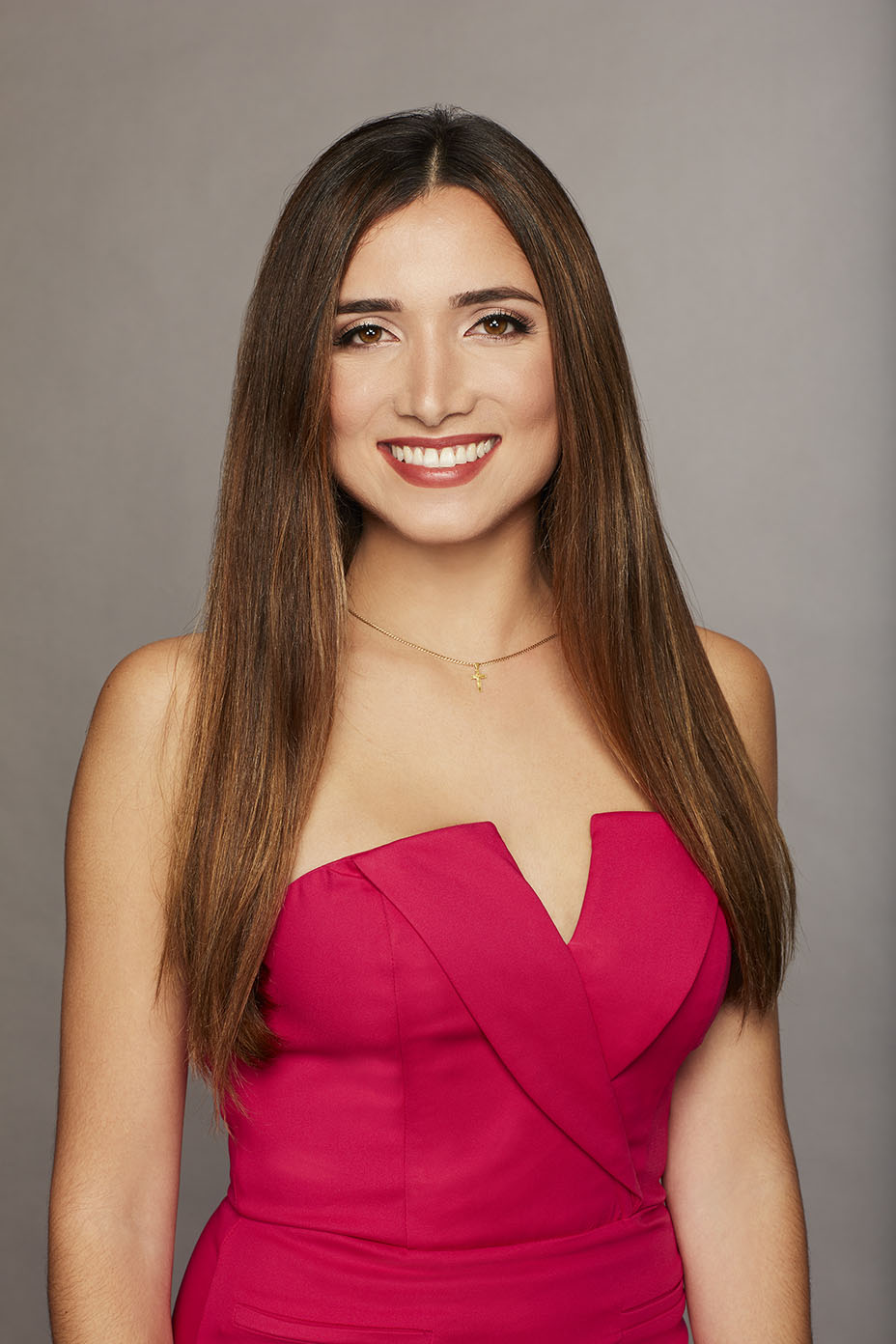 “Nina was born in Croatia and moved to the United States with her mom when she was 9 years old, fleeing the conflict there amidst bullets and bombs. Amongst her many hobbies, Nina enjoys kayaking and hiking. She’s also watched The Bachelor with her mom and grandma for years.” 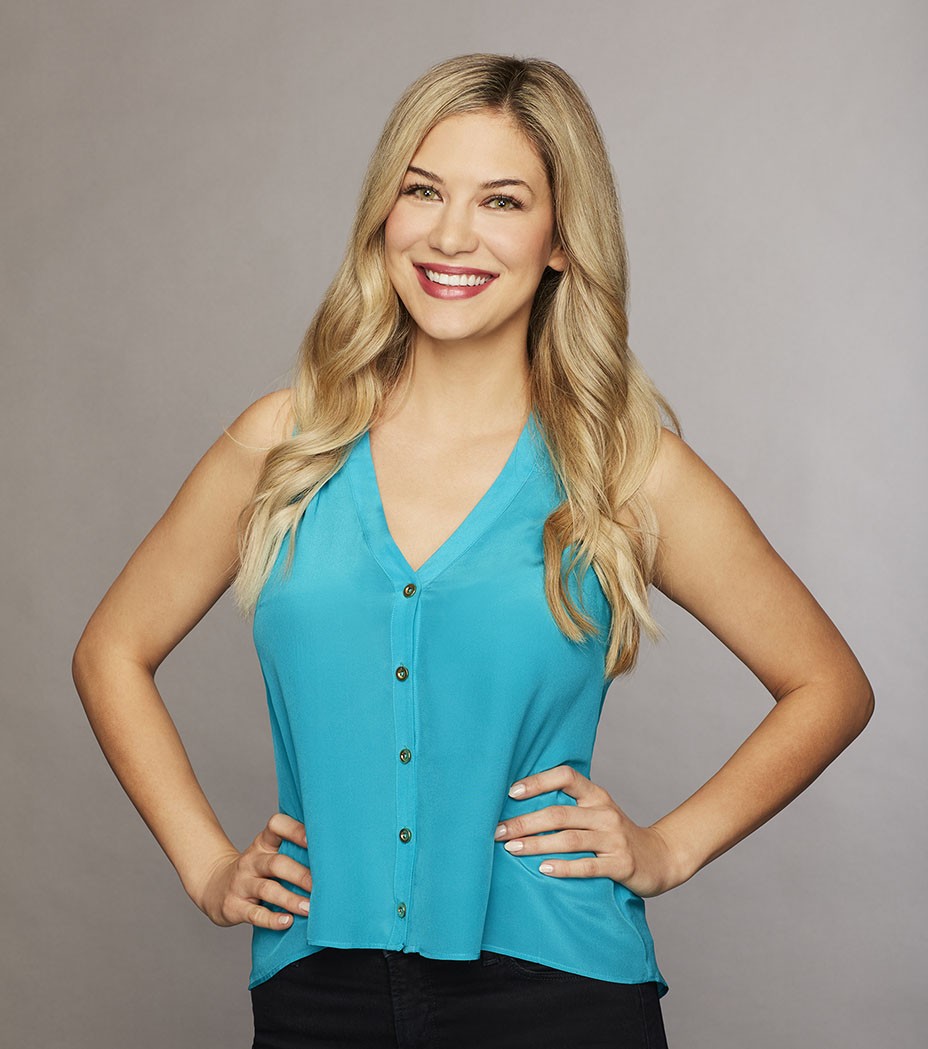 “Onyeka grew up in Manhattan, Kansas, in a loving family. Her parents are originally from Nigeria and have been married for 35 years. Fun fact: Her parents got engaged after just two weeks. Onyeka is hoping to have that same kind of luck with Colton.” 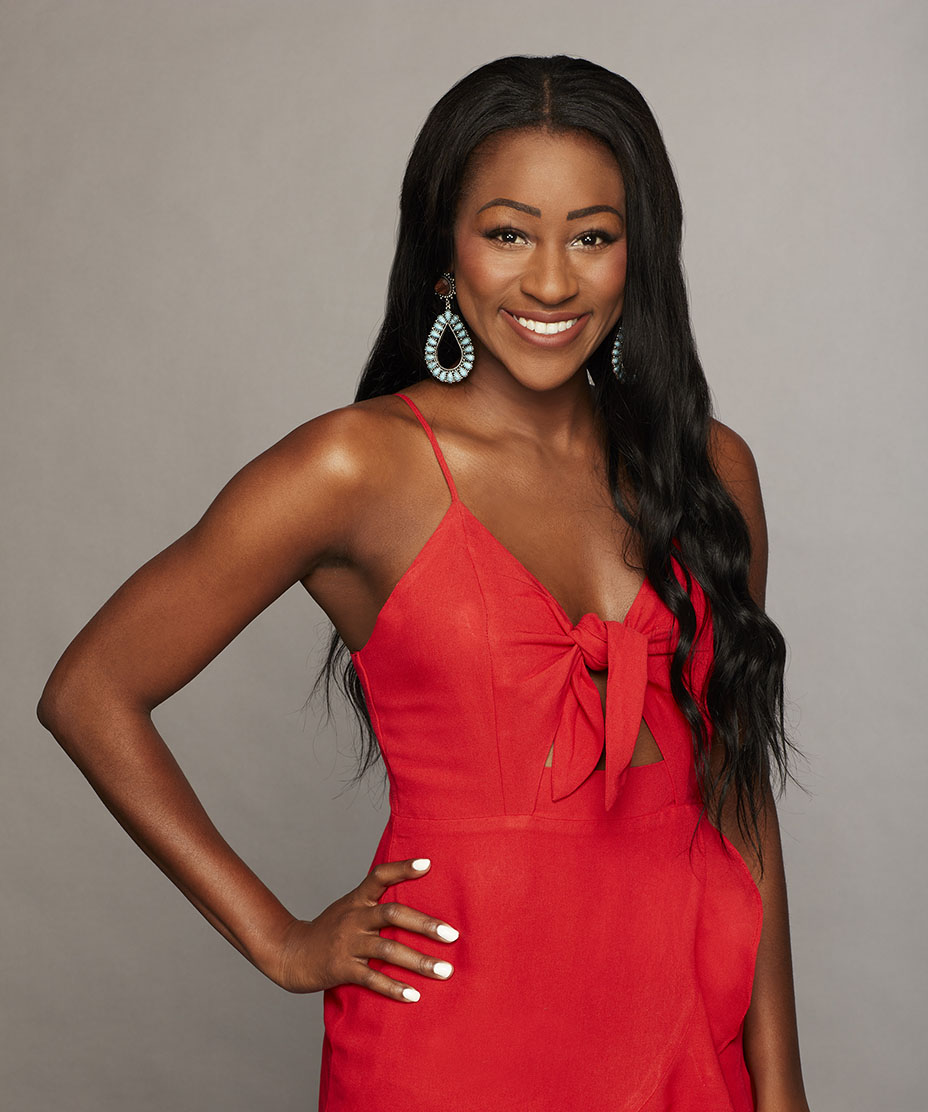 “Revian is an aesthetician from Los Angeles. When she’s not helping people feel beautiful, she loves to attend music festivals. She’s also fluent in Mandarin.” 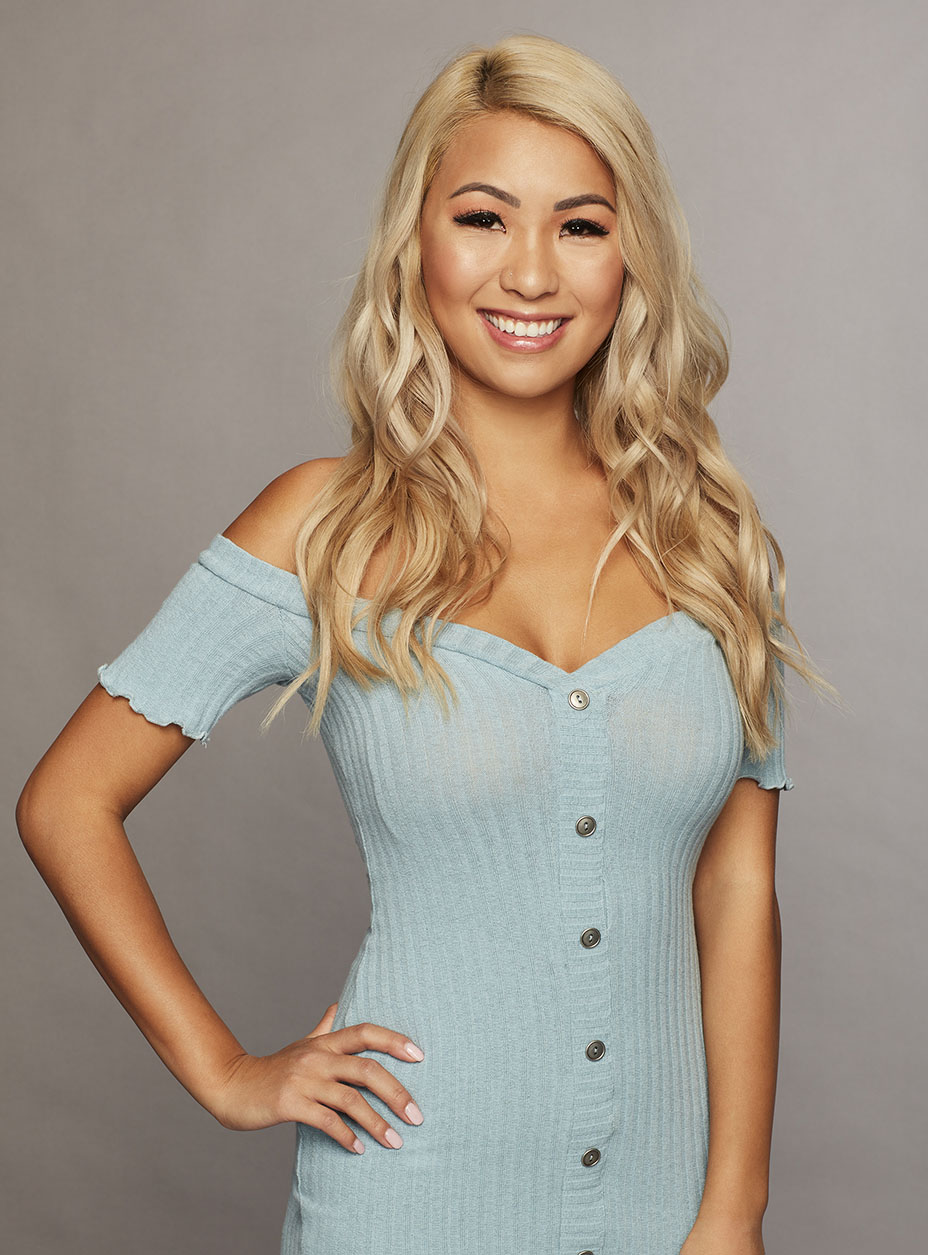 “Sydney has danced since she was 3 years old and is currently a professional dancer for an NBA team. She’s had great success in her career but hasn’t been as lucky in love. She’s never had a boyfriend!” 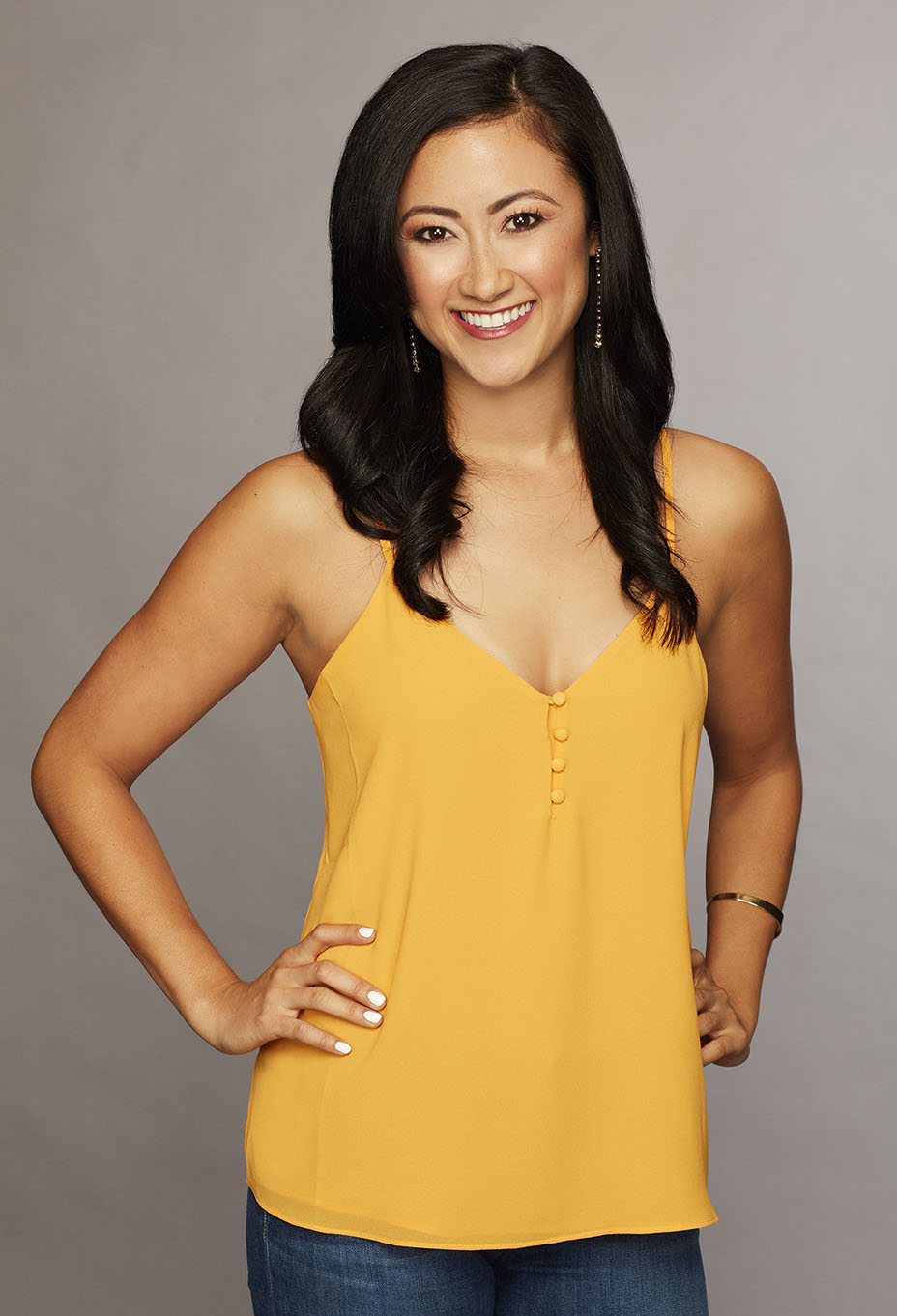 “Tahzjuan grew up in Houston but moved to Colorado with her mom, brother and two dogs. She loves reading, outdoor concerts and shopping with her mom. Fun fact: She has a tattoo that says “I love bad ideas.” Hopefully, Tahzjuan only sticks to her good ideas when it comes to Colton.” 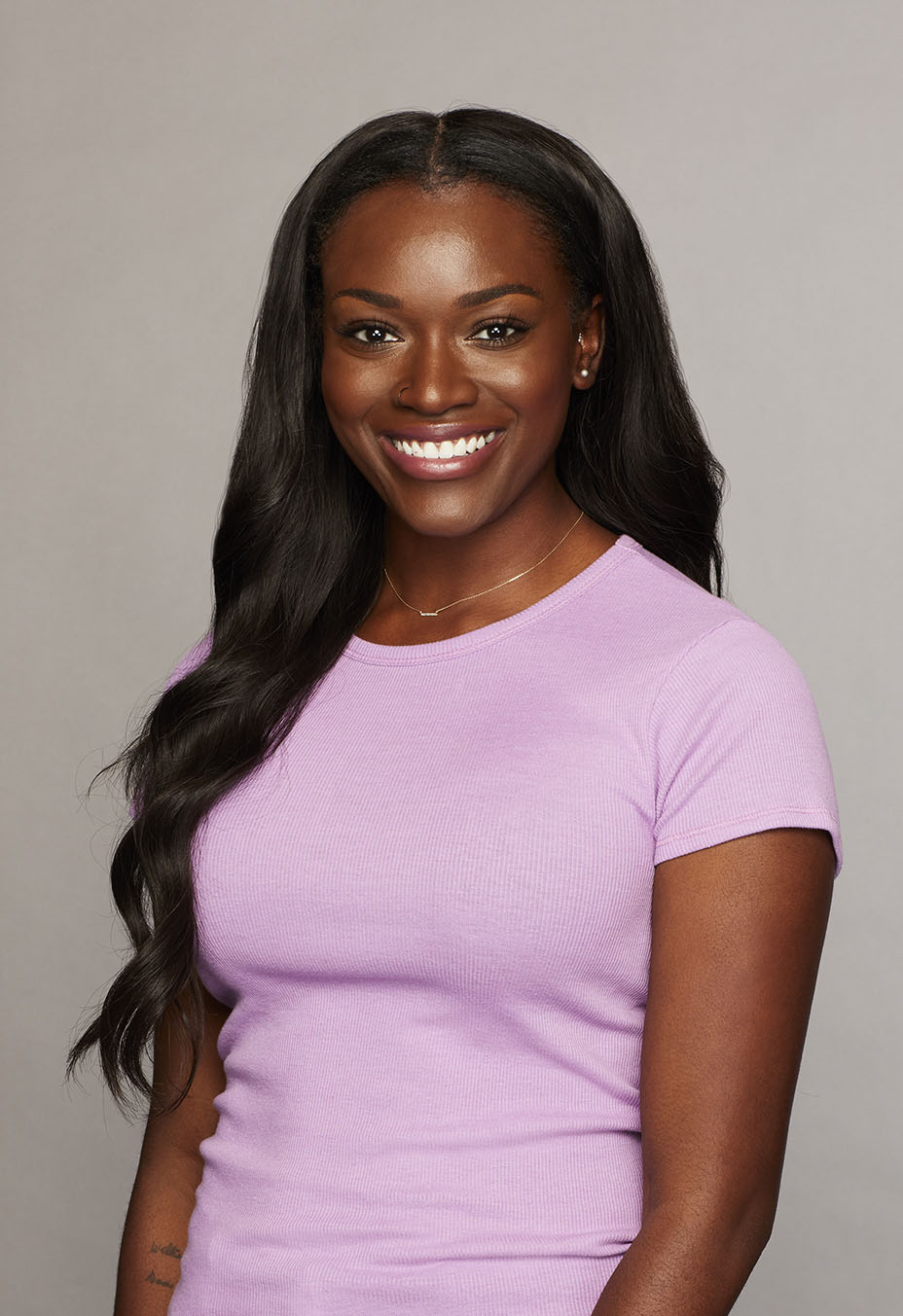 “This Southern California girl is definitely not the squeamish type — she draws blood for a living! When she’s not filling up vials for her patients, she volunteers at her church and goes wine tasting. Unlike her patients, Tayshia hopes Colton feels faint when he sees her!” 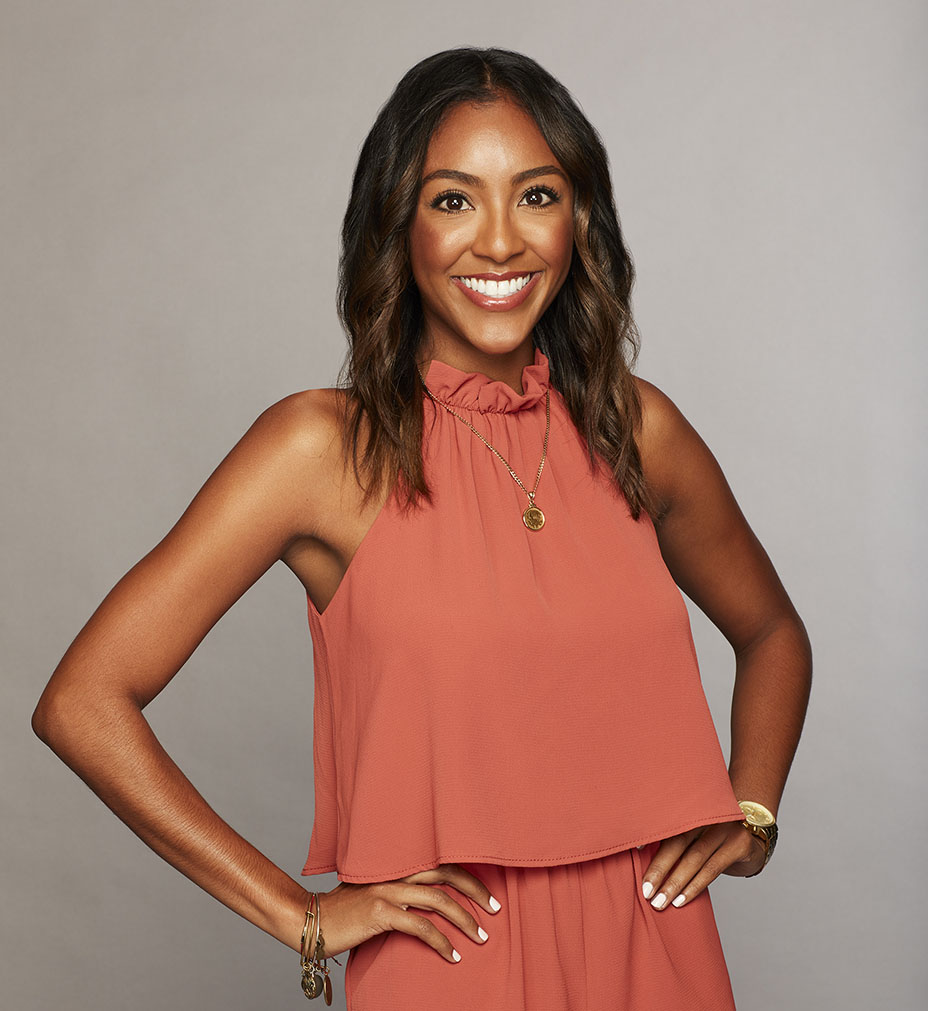 “Originally from New York, Tracy relocated to West Hollywood to pursue a career in wardrobe styling. When she’s not helping celebrities look their best, she’s traveling the world with her sister. She’ll be helping Colton with fashion tips all season long.” 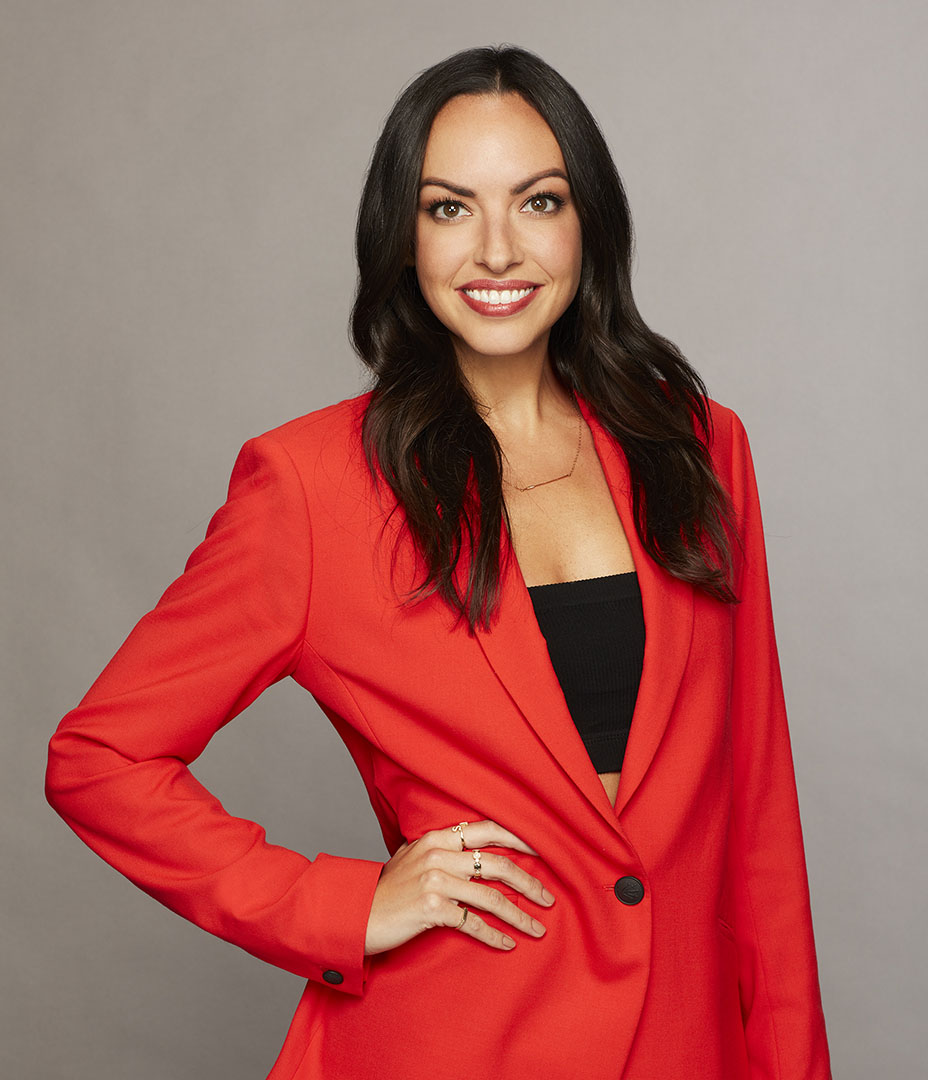