[Warning: This story contains spoilers from the season finale of The Bachelor.]

Viall, who was a two-time runner-up on The Bachelorette and walked away single from his turn on the franchise’s summer spinoff Bachelor in Paradise, finally got down on one knee and proposed to his winner, Vanessa Grimaldi.

“I will never forget the first moment I saw you,” began a nearly shaking Viall. “Every moment since then I’ve been falling more and more in love with you. There have been plenty of times where I’ve tried to fight it, and I don’t want to fight it anymore because I do love you. I’m in love with you. So much about me being here has to do with the past. When I look at you, all I see is my future.”

Throughout the episode, Viall had consistently voiced fears that he would once again be rejected mid-proposal. “My only fear now is: What if she says no?” he asked moments before Grimaldi’s arrival at the proposal site in Rovaniemi, Finland.

Grimaldi, too, had shared her doubts with viewers.

But when she heard Viall’s pre-proposal speech, she appeared to shake her doubts.

“You’ve noticed every part of me,” she replied. “Nick, when I’m with you, I’m the happiest I’ve ever been. I knew this kind of love existed, I just never thought it was going to happen for me until I met you. So thank you for taking another chance on love.”

She continued, “I know things are not going to be easy. I know I can get emotional, get a little crazy, and I can overthink things when things get hard. But I promise to remind you every day how happy you make me.”

Viall then got down on one knee to ask Grimaldi to marry him, pairing the question with a Neil Lane diamond engagement ring.

She accepted with a resounding yes: “I’m the happiest I’ve ever been.”

“Should we go start our life?” he asked her. While kissing him, she replied, “Let’s go do it — literally.” 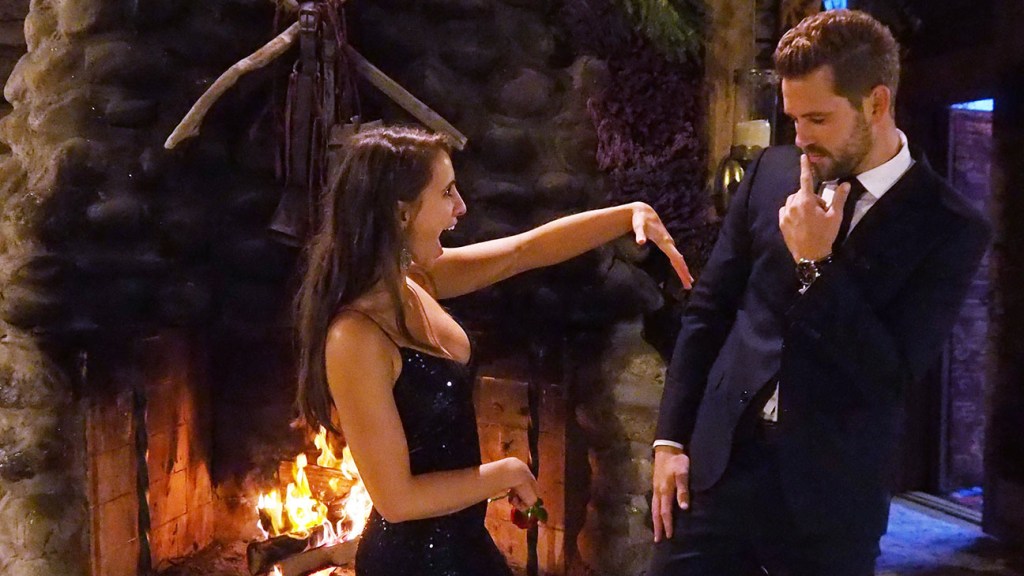 Though Viall finally found his happy TV ending, his long journey to the finale was no easy ride.

Grimaldi beat out runner-up Raven Gates, and Viall struggled with delivering the break-up blow to his second-place finalist, having been in her shoes two times prior.

“I thought a lot about our time together, our journey,” he explained to Gates when she arrived, first out of the limo. “I think about how much I’ve grown to care about you, to respect you. And I feel how much love I have for you.”

But then he began to tear up and look away.

“Thinking about last night and this morning, I just don’t know if I’m in love. I think my heart is somewhere else,” he said. “All I could think about this morning, when I figured out where my heart was, was how much I loved being next to you last night. I’m just torn up inside letting you go. I feel like I’ve been so selfish trying to figure out where my heart is at, and you’ve been so selfless allowing me to do that. I’m just, I’m sorry.”

The 25-year-old boutique owner took the devastating news in stride. Going into the proposal, she said she was ready to be engaged, had no hesitations and had “all the faith in the world that it’s going to end the way I want it to end.”

Still, she told Viall, “I never regret standing here, telling you how I feel.”

She then struck a sadder note in her departing limo, asking, “What could I do different? Is it just that no one can feel that way about me? Why even look for something that’s not possible.”

'The Bachelor's' Nick and Vanessa Defend Their Tense Public Debut

Viall, a 36-year-old entrepreneur who next will compete on ABC’s Los Angeles-set Dancing With the Stars, and Grimaldi, a 29-year-old special needs teacher from Canada, also had their own hurdles.

When bringing his frontrunner home to meet his family, Viall’s father, Chris, had a tearful encounter with Grimaldi, as she and his son had yet to settle on where they will live.

“You have to not just love the person, but you have to be willing to give up — you have to sacrifice,” he told her. “So no, love’s not enough. It’s commitment. It’s selflessness.”

She replied in tears: “I just never thought I was ever going to meet anyone like your son.”

Chris confided to the camera that he could feel her emotion, but also feared that she would hurt his son.

Grimaldi also admitted to Nick ahead of the proposal that she was scared of the unknown of the experience, given that Gates was still along for the journey.

“If you end up with me because my relationship with you is slightly greater than someone else’s, I don’t know that I’m comfortable with that,” she told Viall. Adding to the camera, “It saddens me that he does have feelings for another woman, and I don’t know how strong those feelings are and if they compare. That’s scary. This is not what I expected to feel.”

At the beginning of the episode, Viall admitted “there’s been moments with each of them where I’ve thought, ‘I love you.’”

Given his track record of almost getting engaged — twice — Viall vocalized his own inner struggle and questioned if he was making the right choice in the moments leading up to the proposal.

When breaking down his two final women, he said Gates was someone he knows would say yes but that Grimaldi is someone who could possibly say no. “She wants assurances that aren’t realistic in the hopes that she can have the perfect story, and right now I can’t guarantee her anything,” he said. “This is the moment I’ve been afraid of from the very beginning. This could all still blow up in my face.”

When speaking to The Hollywood Reporter ahead of the finale’s airing at the Women Tell All taping, Viall insisted, “Any guy would be lucky to have [the final two women]. I was lucky enough to have the two to choose from — but I hate to say the word ‘choose.'”

Providing some insight as to what was going on in his head during those final moments, the Bachelor admitted that it was difficult to go back in time to that moment, which took place three months prior.

“A lot goes into that day,” he said. “Once I was able to make a very difficult decision, to see how that decision played out. I was just nervous the whole way through.”

Playing into his fears on whether or not he would find true love in the end, Viall said his past failed attempts were not thoughts he could simply push aside.

“I was hopeful, but you never know,” he said. “Anything is possible in the Bachelor world. I was prepared for anything.”

What Nick and Vanessa Revealed During Their 'Bachelor: After the Final Rose' Visit

The Bachelor and Grimaldi made their first public debut during the live After the Final Rose special, which aired immediately after the finale on ABC. Though the couple remains engaged, both Viall and Grimaldi spoke honestly about the struggles they’ve faced since the televised proposal.

“We know we have a long way to go,” Viall told host Chris Harrison. “We’re still getting to know each other, that’s the reality.”

The two discussed their future plans, which doesn’t yet include a wedding date but will see Grimaldi moving from Vancouver to the U.S., which is also where they plan to get married. When Viall said they are making sure to go through the proper channels, Harrison delivered a quick dig to President Donald Trump and his controversial travel ban: “Not as easy as it used to be.”

Still, going into Monday’s finale event, Viall insisted to THR that he had no regrets and that the fourth time is officially the charm.

“I’m definitely done with The Bachelor franchise,” he said. “But I’m very grateful for my time. It’s had its ups and downs. It’s been a long journey. And I’m ready to say goodbye to it.”

Delivering on ABC’s promise that the live special would also see a franchise first, Harrison surprised Bachelorette Rachel Lindsay, the second guest of the night, by introducing her to four of the contestants who will be competing on her upcoming season.

“The Bachelorette starts right now!” he exclaimed. Lindsay was then introduced to two African-American and two white contestants. “I’m ready to go black and I’m never going to go back,” said one hopeful.

Lindsay breaks show barriers as the first black lead in a combined 33 seasons of The Bachelor and The Bachelorette. Her season, which hasn’t begun filming, is expected to premiere in late spring.

Keep checking in with The Live Feed for updates on Viall and Grimaldi as the pair make the TV rounds Monday night and Tuesday. Are you happy with the ending? Tell THR in the comments.