At one point during the premiere of The Bachelor, Matt James confesses to the audience: “I just want to make sure I am everything they are hoping I am.”

Now speaking with The Hollywood Reporter, the historic star of the ABC series unpacks the layers behind that statement.

“Being ‘the first’ at anything in life, there’s going to be an extra level of eyeballs and you setting the standard for what that looks like,” he tells THR on Monday, ahead of his highly anticipated debut as the first Black Bachelor in the ABC franchise’s 18 years. “I didn’t want to put unrealistic expectations on that experience for myself in terms of, ‘Matt said this or does this in relationships, so all Black people think this.’ I’m speaking for me and from how I was raised. And I hope that story resonates with people because it’s real and it’s authentic.”

James has a unique journey to the screen. After developing a Bachelor Nation social media following due to his proximity to pal Tyler Cameron (the fan-favorite runner-up from Hannah Brown’s season of The Bachelorette), the 29-year-old North Carolina native was cast as a high-profile contestant on Clare Crawley’s pandemic-hit season of The Bachelorette. When Crawley’s cycle was initially delayed due to COVID-19, however, producers plucked James from the cast and offered him the starring role for The Bachelor’s 2021 season.

“I knew enough about the franchise to know that there hadn’t been a Black Bachelor before, and it was the last call I was expecting to get,” James recalls of the surprising offer. “The hesitation was that I was excited about going out to meet Clare. We went out [to California to start filming The Bachelorette] in March and then they sent us back because of COVID, so this whole time I’m thinking I’m doing something and then the day comes where they ask, ‘How would you feel about this?'”

He continues, “I needed a second [to take it in]. But then I realized how much of an honor it was. I never thought that being the Bachelor would come from being on The Bachelorette. It was a humbling thing, because of the times that we’re in and being the first Black Bachelor. I was very excited from that point on.”

The call came over the summer during the country’s racial reckoning and sweeping Black Lives Matter movement. Amid a push to diversify the majority white franchise, ABC and producers Warner Bros. TV got to work so the show could become more inclusive, starting with Crawley and Tayshia Adams’ joint season of The Bachelorette and materializing further with James’ cycle, which is the 25th season in the long-running series.

Crawley, who is Latina, and Adams, who was the first Black and Latina star, each picked winners who are outside of their race, giving the franchise two interracial couples (who are still together) heading into 2021. The show gave racial issues a platform during Adams’ time as star and James’ contestants will be the most diverse grouping in franchise history.

When accepting the role, James stressed to production that casting such a group of women was top of mind. “There’s not one type of woman that I’m interested in and that’s what you see on the first night,” James says of the 32 women who began the journey with him on the premiere. “You see an array of color, shapes, sizes, personalities and just representation.” 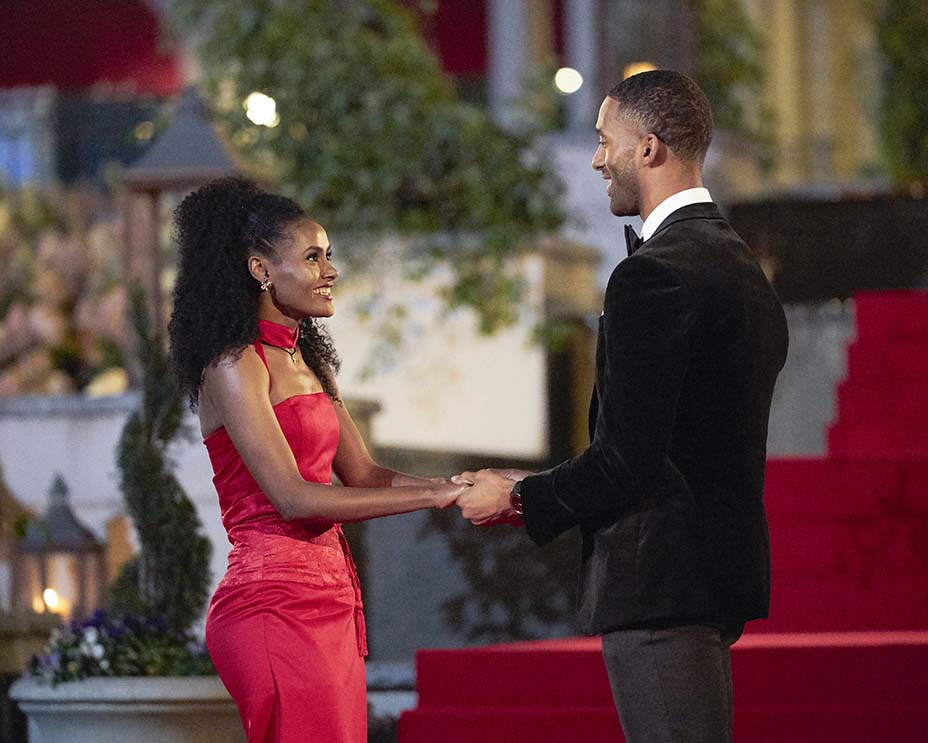 But changes were also made behind the scenes; more people of color were hired in producer roles, and a “diversity team” was brought in to train and work hand-in-hand with James and the contestants, as well as the crew.

“You need to confide in people who have a shared experience and who can speak to what you’re going through or what you’ve been through. And if there’s no one there who can speak to that or who knows what it’s like to date interracially, then how can you confide in that person? It would be like going to a marriage counselor who had never been married,” he says of the behind-the-scenes support he found while filming. “Any time I had a question or if something didn’t make sense, I had the option of reaching out to that team. I talked to them a bunch and we have a great relationship, and they provided all the resources that I needed to be successful.”

James is a commercial real estate broker in New York City who, as a former college football player at Wake Forest, joins a long list of Bachelor athletes. He also runs a nonprofit, with Cameron, called ABC Food Tours, which introduces kids from lower-income communities to healthy-living activities and experiences. Having never appeared on the franchise, or on any TV show for that matter, James turned to former Bachelors, like Sean Lowe, and Rachel Lindsay, who was the franchise’s first Black Bachelorette in 2017, for advice.

“How can I meet somebody doing this? You are skeptical,” he admits of looking for love on a reality series. “But, you can also think that about meeting someone on an app or in a bar. I’ve seen relationships work from this show and I reached out to those people. A lot of the people who have gone through this have successful relationships, and then there are people who don’t, and I’m taking in both sides to see what the best practices are.”

It was Lindsay who offered him the best advice, he says. The attorney and media personality faced similar external pressures during her unprecedented starring turn. (She ended up picking Bryan Abasolo, who is Colombian, and they wed in 2019.)

“You’ve got to be fearless in who you are pursuing and what you want,” James shares of his outlook. “A lot of that came from the conversation I had with Rachel because that was her approach. Some of the best advice that she gave me was just to be yourself and don’t try to please anybody else, because you never will. That sounds like a simple thing to say, but it’s real. And that’s what I doubled down on.”

When James introduced himself to viewers on Monday’s premiere, his upbringing took center stage. Explaining how his parents split when he was very young, James said that he struggles with being vulnerable to love. And he said he is well aware of the pressures being placed on him as a biracial star.

Speaking to THR, Harrison says James carries the weight of his platform throughout the season.

“He feels the pressure of representing a community, representing his family, representing himself,” says the host in an interview ahead of James’ debut. “He’s very cognizant of that and very aware. If you’re expecting the frat boy you see with Tyler Cameron on Instagram, that’s not exactly who you are getting as our Bachelor. There is a lot of depth and realness to this man and I can’t wait for everybody to see that.”

What ended up blindsiding James was just how much he would open himself up to the process. “I never would have imagined that I would have been as vulnerable as I was. But I did it. And these women did, too,” James tells THR.

For Harrison, that comes as little surprise. The host says James and his contestants follow in the footsteps of Adams and her finalists, who opened up to each other in conversations about race, addiction and mental health. “Every Bachelor and Bachelorette will tell you that they never expected to go as deep as they do,” says Harrison. “I told Matt, ‘You’re going to cry. You’re going to want to punch me in the face. You’re going to go through a range of emotions the likes of which you’re never seen before. You just can’t skate through this.’ And that’s why this show and the process works. It really does strip you down and makes you dive a lot deeper than you anticipate.” 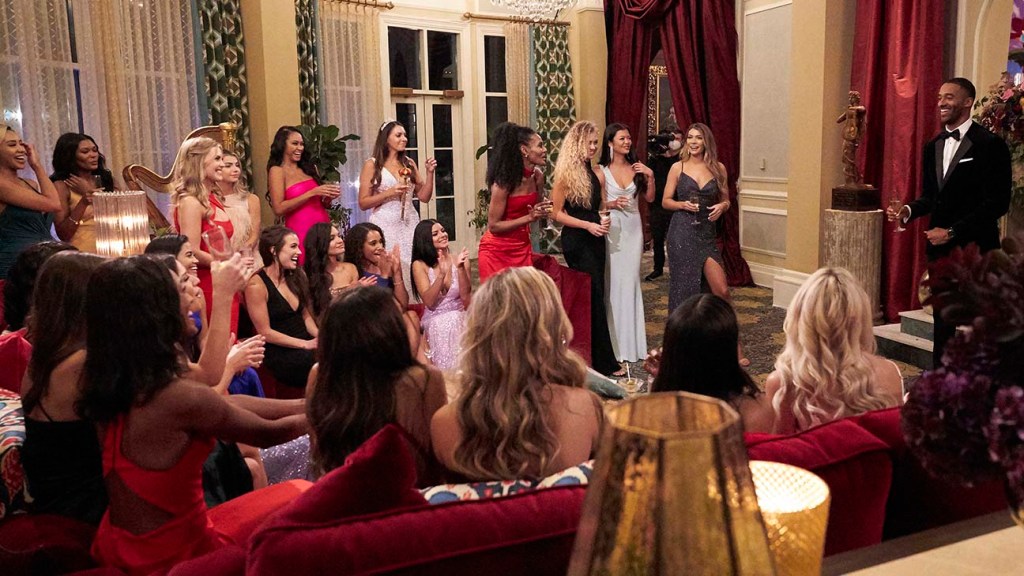 The shift of seeing more contestants who are serious about finding love could be explained by the circumstances of 2020. Filmed in a bubble at the sprawling Nemacolin luxury resort in Pennsylvania, producers brought the entire Bachelorette blueprint over to production on The Bachelor in order to film another COVID-safe. They filmed in isolation in the fall and wrapped in late November.

“We didn’t know if The Bachelorette would work when we did it this summer; there was some trepidation and worry. We took every precaution we could, but you just didn’t know until you did it,” says Harrison. “But once we went through the entire Bachelorette season without any issues, we knew that if we went back to that formula it would work for The Bachelor. We actually took it one step further and were smarter about testing before we left. Other than that, we went by the book and it worked 100 percent again.”

Strict protocol was in place, including quarantining and testing every few days — highlighting the effort that James and the contestants went through in order to film. When asked if that made the experience more serious, James replied, “Substitute ‘serious’ with, intentional.”

He explained, “There’s an extra level with quarantine. There are a bunch of different things you have to do now so it’s like, do you really want to put yourself through all of this if you’re not serious or intentional about it? It would be a lot for someone to do to not be intentional about what they wanted. And that was reassuring.”

During the premiere, James admitted that reflecting about life amid the pandemic helped him to prepare for the possibility of a proposal. And, as the trailer for James’ season shows, hearts are certainly on the line.

“The soul-searching had started to take place throughout quarantine because I knew that I was going into a position where the end result is going to be an engagement,” he now says of shifting from the mindset of being a contestant to being the lead, where an engagement is more likely. “I was trying to think about things in my life that were holding me back from getting there with somebody. I had already been doing this type of thinking [for The Bachelorette], in terms of being mentally prepared to be in a relationship and to be married.”

James — like many before him — is staying mum on how his season will end. But ultimately, the star says he was able to overcome external pressures, be vulnerable and follow his heart. “You are going to see authenticity, you’re going to see someone who is real — and I’m very happy right now,” he teases.

The Bachelor airs Mondays at 8 p.m. on ABC. Follow along with Live Feed’s season coverage here.