[This story contains spoilers from the Bachelor in Paradise season six finale.]

After paving the way as the first queer romance to be featured on the long-running ABC franchise, Burnett and Haggerty ended the groundbreaking sixth season of the summer spinoff as the first same-sex couple to get engaged. Across 44 combined seasons of Bachelor in Paradise and main staples The Bachelor and The Bachelorette, this is the first same-sex couple to be celebrating the finale milestone.

“I know that this has been really hard. I’ve put you through struggles and you were always there for me regardless of how much I didn’t deserve it at the time,” said Burnett while proposing during the pre-taped portion of Tuesday’s season finale. “I never knew that someone could be that patient. There were a lot of things that came between us, mostly myself and my own struggles. Like you said, I came here to find myself. But I found myself in you.”

The three-hour event included a cast reunion that was taped at the end of August and attended by The Hollywood Reporter. During that studio-taped portion of the show, Burnett and Haggerty updated Bachelor Nation that they are indeed still engaged — and Haggerty offered her own down-on-one-knee proposal and ring to Burnett: “I know that last day in Paradise was the best day of my life and I wouldn’t want to do this life with anyone but you,” she said.

“I know it’s a big deal that it was the first same-sex [engagement] on this franchise in the U.S., but we weren’t thinking of the significance of that at the time,” said Burnett when speaking to THR after the reunion taping. “It was just about us loving each other and that’s really what the focus was.” 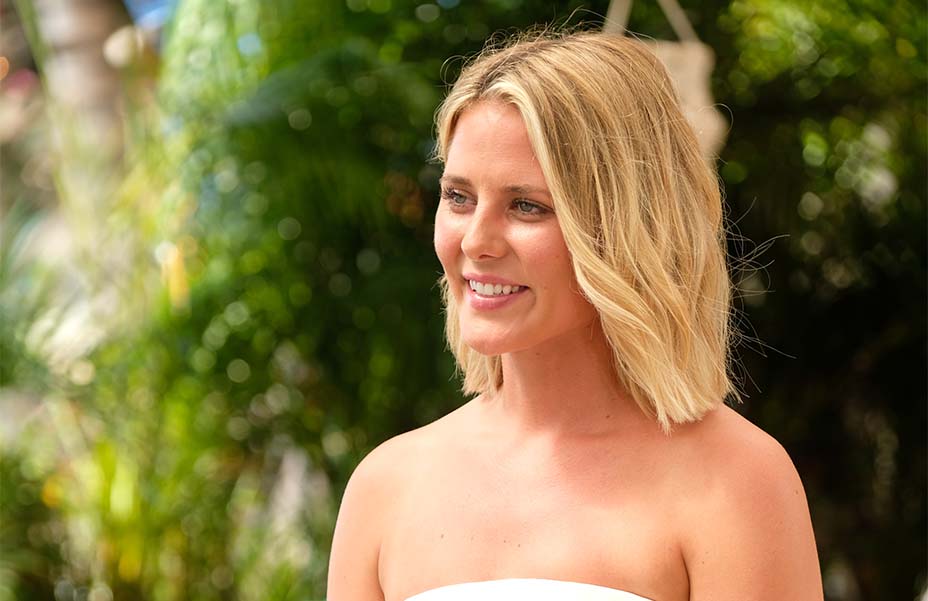 Burnett and Haggerty’s TV romance was unconventional by franchise standards. Burnett became a quick breakout star for the franchise after her debut on Colton Underwood’s season of The Bachelor, and follow-up cameos on Hannah Brown’s Bachelorette, earlier this year. When she returned to the franchise to find love this summer on Paradise, she came out to producers and viewers at home as sexually fluid and, though she at first explored a relationship with male contestant Derek Peth, she confided during one-on-one interviews that her heart was with Haggerty, a woman she had been dating before Paradise.

Haggerty, however, was an outsider who had never appeared on the reality franchise and when she arrived at the beach on the Aug. 20 episode of Paradise, her addition to the cast appeared to take Burnett by complete surprise. “I was so shocked. I could have never expected that,” Burnett told THR recently of Haggerty’s arrival.

Offering an honest portrayal of Burnett’s coming out journey thus far, the franchise continued to explore the steps the new couple was now facing once Burnett decided to commit to Haggerty, and had come out to her fellow cast and to America watching at home. For example, Burnett would overcome public displays of affection and ultimately come to accept herself and her relationship by the end of the season. The ABC franchise has been praised by GLAAD for allowing Burnett to speak “honestly and openly” about coming to terms with her sexuality.

Host Chris Harrison had previously explained to THR that the producers decided to bend traditional show rules for the potentially historic romance. “When this situation presented itself to us with somebody we really love and care about in Demi, I think our initial instinct was the right one: ‘Let’s lean into it. Let’s go there. Let’s explore this,'” he said. “It was a pretty easy but big decision to go down that path with Demi, especially since it’s with someone who is outside of our franchise and our family.”

Now, Burnett and Haggerty join the ranks of the Bachelor franchise’s engaged couples, including two other couples from their Paradise season: Chris Bukowski and Katie Morton, and Hannah Godwin and Dylan Barbour. Burnett is now living in Los Angeles near Haggerty and is open to the idea of filming their forthcoming nuptials for TV (“I’m down — weddings are expensive!” she told THR.) Meanwhile Haggerty is still getting accustomed to her newfound reality TV spotlight, with Burnett showing her the ropes, as they navigate reality TV fame and still focus on their relationship.

“I don’t want to carry the torch and say how [the franchise] should handle all of this representation and what not,” Burnett told THR about the impact her story can have on the franchise. “I think that with time it’s just going to be normalized and just going to be people loving each other, whatever way that comes.”

GLAAD offered more praise on Wednesday. “Demi Burnett and Kristian Haggerty have shown audiences that LGBTQ couples go through many of the same romantic joys, trials and tribulations on the road to finding love,” said Sarah Kate Ellis, president and CEO, in a statement. “Seeing two women get engaged on Bachelor in Paradise is a groundbreaking step forward toward including LGBTQ couples across reality television. Reality TV is finally moving towards storylines that LGBTQ audiences and allies have been craving for quite some time.”

Tuesday’s finale also featured the anticipated Bachelor announcement, which revealed that Peter Weber from Brown’s season of The Bachelorette will be taking on the starring gig. The Bachelor returns Jan. 6, 2020.

Kirsten Chuba contributed to this story.