After arguably more drama off-screen than on, Bachelor in Paradise season four has wrapped.

For those outside of Bachelor Nation or who need a refresher, ABC’s Bachelor spinoff faced an internal investigation of sexual misconduct, a midseason production shutdown and a cast shakeup before resuming its run. (More on that here.)

After five weeks on the air, Monday night’s finale of The Bachelor‘s raunchier, boozy summer spinoff saw a surprise engagement for one couple, while another left Paradise in tact. Much to Taylor Nolan’s surprise, boyfriend Derek Peth popped the question before a live studio audience, while Raven Gates and Adam Gottschalk vowed to stay committed in the real world while sitting down with host Chris Harrison.

“I choose to love you this minute, this hour, this day and everyday from here on out,” Peth told a stunned Nolan before popping the question in front of an ecstatic live audience. Through happy tears — and raining rose petals — she said yes, marking another success in the Bachelor couple books.

In four seasons, only two other couples have stayed together after the BIP cameras stopped rolling: Jade and Tanner Tolbert (married and with a child) and Carly and Evan Bass (who married earlier in the season and are now expecting).

Beyond the spinoff, other franchise shows have not had the most successful results in the post-TV match-making game. There are only seven couples from the Bachelor and Bachelorette’s 34 combined seasons that are still together: Rachel Lindsay and Bryan Abasolo from the most recent season of Bachelorette, JoJo Fletcher and Jordan Rodgers, Kaitlyn Bristowe and Shawn Booth, Sean and Catherine Lowe, Ashley and J.P. Rosenbaum, Molly and Jason Mesnick, and Trista and Ryan Sutter. Most recently, two Bachelors called off their engagements: Ben Higgins and the most recent star of the cycle, Nick Viall.

With those odds, how realistic is it to find love in ABC’s reality TV setting?

Despite the Bachelorettes faring better than their male stars, Harrison told THR the success rate is really on a couple-by-couple basis. “I don’t think it’s necessarily The Bachelor vs. The Bachelorette. I think it’s each relationship,” he said after the Paradise finale, which was pre-taped.

Harrison, along with Gates and Gottschalk, Amanda Stanton (who revealed her split with Robby Hayes) and their co-star Jasmine Goode (who walked away single, but did fall for one of the contestants), all speak to THR about why they believe this process works, many of their statements echoing Bass’ memorable love letter to the show. 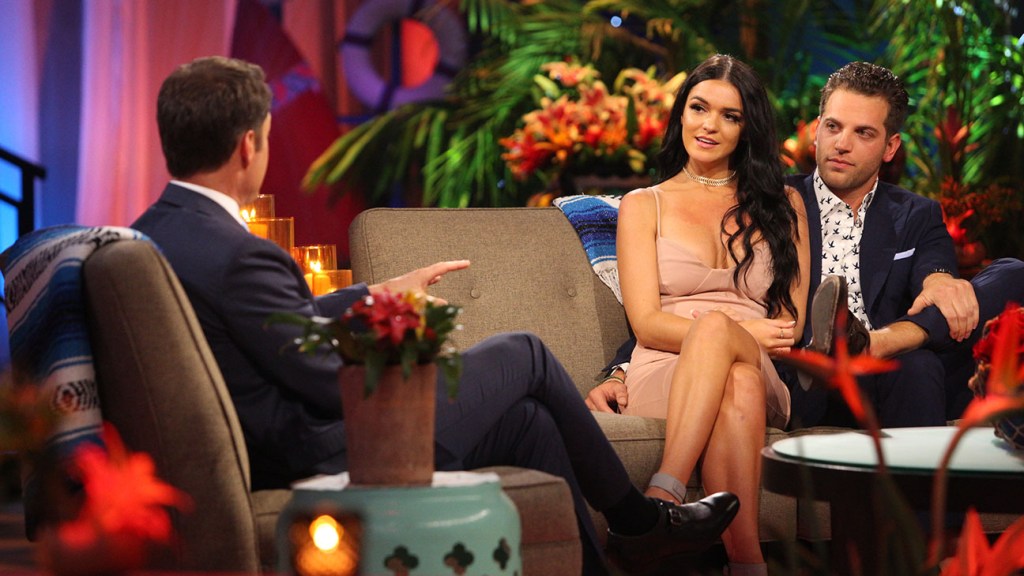 In what ways does Paradise work when it comes to finding the one? Did you go in expecting to come out with a relationship?

Raven Gates: I definitely was looking for something serious.

Is it easier to find love on certain franchise shows over others?

Chris Harrison: I don’t know, necessarily. You look at Sean Lowe [Bachelor season 17] and then you look at the guys who come out of Paradise and who have done really well. So I don’t think it’s necessarily the The Bachelor vs.The Bachelorette. I think it’s each relationship. You really have to take each relationship differently, and look, relationships are hard. It’s what makes the show so relatable and why it’s probably so wildly popular. There’s this sensational appetite for all things relationship because we know how hard it is. Look at all the range of emotions we ran through tonight. From crazy to funny to sad to beautiful, and then a proposal. Will Derek and Taylor make it? Will they have their dream wedding and live happily ever after? Who the hell knows? I wish them well and I hope they do. Same thing with Adam and Raven.

Adam Gottschalk: With Bachelor and Bachelorette, you work so hard for one specific person and if it doesn’t work out and you don’t have closure, then you’re asking yourself, “What happened?” And in Paradise, there’s so much fluidity with people that if something doesn’t work, you can figure it out with someone else. At first, my gut feeling was that I really didn’t want to do it. But then I figured, why not? Anything can come of it and we’ll see where it goes. And I wasn’t a part of the original cast like Raven, but I came along a week later after the shutdown and all that stuff. And we’re here now so anything is possible.

Gates: You get to move around and if something isn’t working, you get to try something different.

Amanda, Bachelor Nation heard the sad news that you and Robby Hayes did not last off-air. We watched a similar situation last year during your breakup with Josh Murray. What do you think it takes for a Bachelor franchise couple to transition into the real world?

As a two-time Paradise contestant, do you have any advice for incoming contestants?

Stanton: Be realistic. Don’t get too caught up. It’s really easy to get caught up. And just be yourself.

Adam and Raven, would you be open to a couple spinoff show like Ben and Lauren’s Happily Ever After?

Gottschalk: Oh, God — [looking at Raven] — we didn’t even talk about that yet.

Gates: It’d be too wild. Our lives would be so crazy. It’d be good TV.

Was it a surprise when Raven’s parents came out on stage tonight? What was that like?

Have you talked an engagement or wedding yet? Taylor and Derek got engaged on stage tonight, so what’s next for you?

Gates: Yeah, Chris Harrison said, “Wow, they really showed you guys up.”  So I said, “Adam, where’s my ring?”

Gottschalk: I plead the fifth.