[This story contains spoilers from the Feb. 22 finale of The Bachelor Winter Games.]

Chris Harrison promised more than one international romance would blossom out of The Bachelor Winter Games. After the show’s three-hour finale on Thursday night, The Bachelor host’s vow held true — and even came with a ring.

The Winter Games experiment proved to be a success when it came to producing couples for the long-running ABC dating franchise. After filming for only a few short weeks in December — and airing its four episodes over the last two weeks — the 25 international castmembers had morphed into five couples heading into the final episode, with four of those pairs hailing from differing countries.

The final competition of the Olympics-themed challenges was Couples’ Ice Dancing. American Ashley Iaconetti and her Canadian beau Kevin Wendt were crowned the winners of Winter Games, but taking home the golden rose proved to be a consolation prize compared to re-emerging as a couple when the cast returned, months later, for the post-finale reunion show.

Four of the five couples survived the finale, with only American Bibiana Julian and New Zealand’s Jordan Mauger calling it quits. During the reunion show, which filmed last week in Los Angeles, it was revealed that one additional couple fell apart after the show wrapped: American Luke Pell and Sweden’s Stassi Yaramchuk.

Their reunion during the taping, which The Hollywood Reporter attended, was icier than the slopes of the Vermont resort where Winter Games filmed. While Bibiana made the difficult decision to call it off with Jordan before filming wrapped, saying she felt rushed and unable to commit, Luke had left the show telling Stassi that he wanted their future to be together, despite the distance. 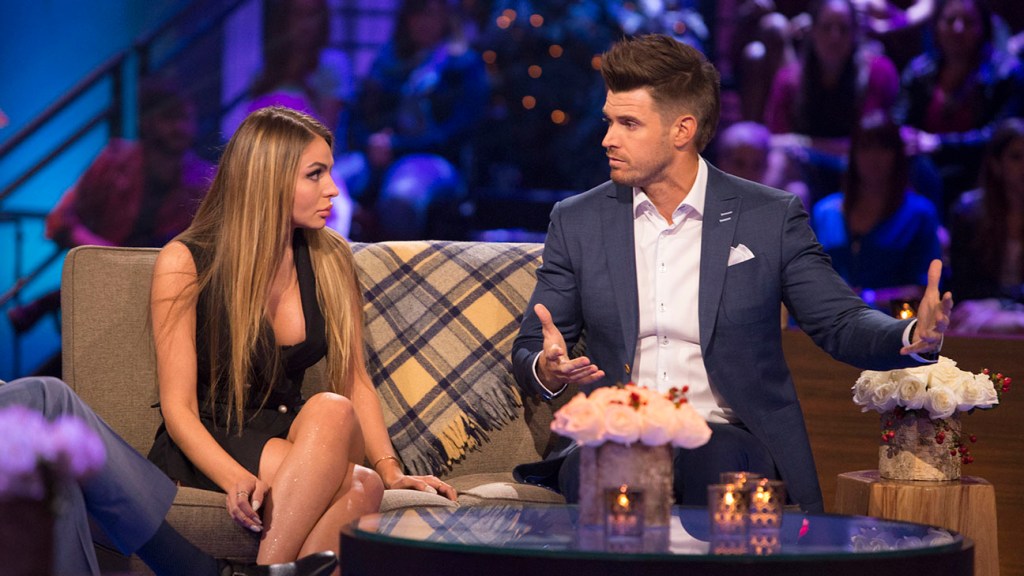 “After the show, it was nothing,” Stassi revealed. Not only had they not spoken, she said Luke never even asked for her number. When Luke joined her onstage, she re-introduced herself as a jab, while castmember Clare Crawley accused Luke of only going on the show for his social media following.

“I think for both of us, as suddenly as we had the chemistry and the connection that we did, all the cameras shut off and we’re back down to staring down the barrel of life,” he sputtered. “It’s not just geographical difference, but sometimes your life might be in a different place, and I felt like we were kind of getting to that point during the conversations that we had right after the show wrapped.”

Stassi was so flabbergasted that she asked him if she was “conscious” when they had this so-called breakup conversation. Her recollection was starkly different. “You didn’t even try,” she said, then asking through tears to no avail: “How after this could [you] cut a person from your life completely?” During the commercial break, she continued to call him out for treating the experience like a game; all he could say was, “Yeah.” He was booed by the audience as he walked off the stage.

After the taping, Stassi told THR of the encounter: “I am now more confused than I’ve been before.” She added, “Real love has no boundaries. But if it’s not love, you will find a thousand excuses.” 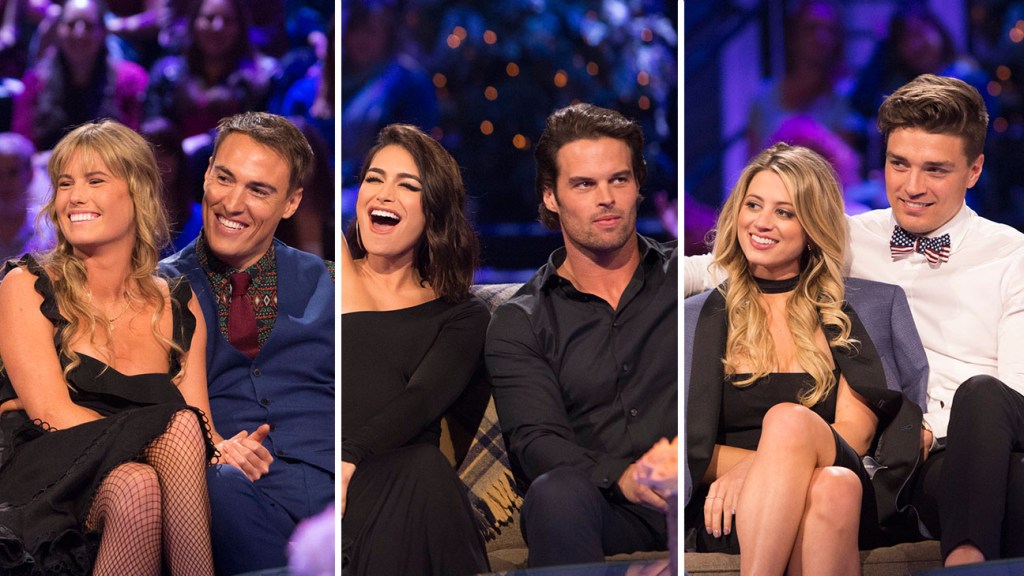 The remaining three couples (above), however, revealed that they had only grown stronger since the cameras stopped rolling. Ashley and Kevin revealed they are still happily dating and making the distance work; Australia’s Courtney Dober and New Zealand’s Lily McManus have moved, together, to Los Angeles; and Americans Dean Unglert and Lesley Murphy decided during the show to take the next step and move in together, also in L.A. “We’ve done a good job at setting time apart for each other and making each other a priority in our lives,” Dean told THR of his future with Lesley.

During the show, Ashley, who has been open about being a virgin on all of her Bachelor stints, explained that she wasn’t waiting until marriage but simply for the right person. And after going in the Fantasy Suite with Kevin, she’s closing the door on talking about her sex life. “If you see the amount of emails and tweets that I’ve gotten about my virginity, their stories comfort me about my decision and my decision comforts them — it inspires them to continue to wait until they find somebody who they feel like really deserves that,” she told THR.

Why Trump Played a Part in 'Bachelor Winter Games' Casting

But it was another former couple who stole the show with their surprise engagement.

Despite breaking his heart when filming Winter Games, Canada’s Benoit Beausejour-Savard got another shot at his American crush, Clare. The pair revealed that Benoit reached out to Clare after she left the show and, after two months of secretly dating, Benoit got down on one knee to propose to a surprised Clare — who excitedly said, “Yes.”

“I’ve always wanted a man that wouldn’t give up on me — you truly have changed my life,” said Clare before the proposal. “I would never, ever give up on you,” he said, before popping the question with a custom Neil Lane ring.

THR spoke with the newly engaged couple after the taping about how they defied the odds and avoided many of the post-show pitfalls that have doomed past franchise winners.

“We spent hours and hours each and every day talking to each other,” said Benoit, who lives in Montreal, while Clare resides in Sacramento.

“I’ve been in long-distance relationships before and what matters is your investment in the relationship,” said Clare. “I’ve had relationships in the same city that have not worked out at all, and have been a struggle to even meet up and see each other. So it’s about wanting it and I think that can overcome anything. When I finally said, ‘I’m going to make myself happy,’ that’s when the best thing comes along.”

She also didn’t rule out a TV wedding in their future: “After my dad passed away, the wedding wasn’t important because that’s when your dad gives you away. So I never thought I’d have a wedding, but it’s a celebration of love and who knows? I never thought it would happen for me even on the Bachelor shows, so [now] it’s not out of the picture.”

Time will tell if Winter Games returns for another season; in the meantime, The Bachelor continues to air Mondays at 8 p.m. on ABC.

Update: As of April 6, Courtney and Lily are the only remaining couple. Ashley and Kevin were first to announce their split on the Almost Famous podcast; Claire and Benoit released a joint statement on Instagram and THR can confirm reports that Dean and Lesley have also called it quits.

What did you think of the finale and reunion special of Winter Games? Sound off in the comments, below.