[This story contains spoilers for The Bachelor: Women Tell All.]

When the former contestants of Arie Luyendyk Jr.’s season of The Bachelor reunited, some got answers but others raised new sets of questions.

The cast get-together, which was filmed last week in Los Angeles, played out over two hours on Sunday night. Hosted by Chris Harrison, the episode saw several of the breakout women from the season get their chance to come face-to-face with the Bachelor who dumped them on TV, including fourth-place Tia Booth, 22-year-old Bekah Martinez and villain Krystal Nielson.

One of the most confusing moments for viewers was no doubt when a never-before-seen clip was played, showing a bleeped-out version of what Krystal said about the infamous bowling date that likely led to her exit from the show. Krystal was so angry with Arie that she called him a “needle-dick” and referred to her fellow castmembers using the c-word. Though ABC censored both terms, Harrison and the women continued to bring up Krystal’s offensive words throughout the reunion special.

“I was not expecting that to be played,” Krystal told THR after the taping. Though her castmates knew what she had said in the moment, none of them knew the producers had caught it on camera. “I was having a private conversation in the bathroom with my roommate. I didn’t anticipate that being public, I was very upset with someone else who was very upset.”

The Hollywood Reporter attended the taping, and though it didn’t make it to air, the women also mentioned how Krystal had called Arie “not Peter” that same night — referring to recent Bachelorette finalist Peter Kraus, who had been in the running for the Bachelor gig. 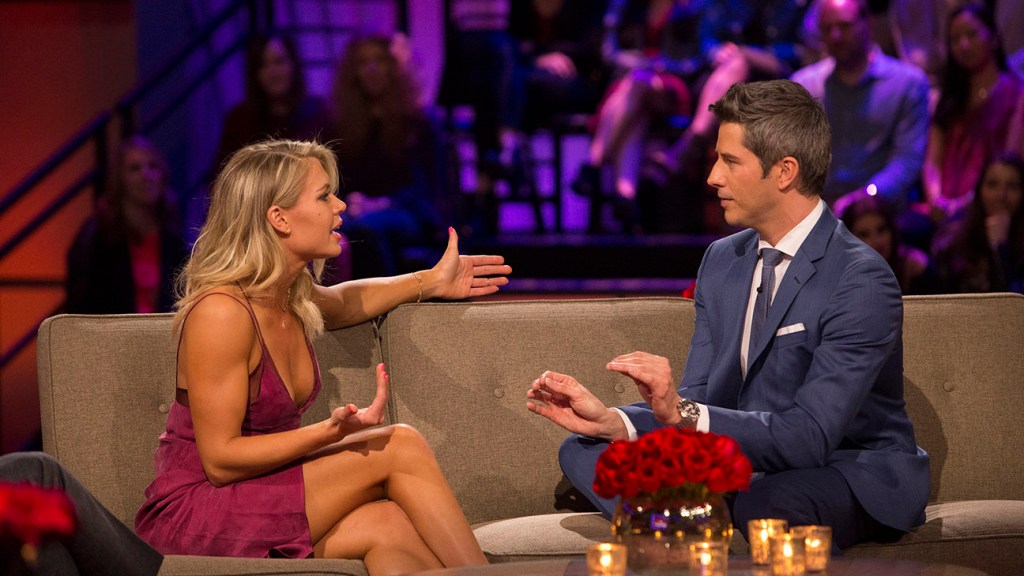 During the taping, Krystal mainly stood her ground, failing to own up to her behavior in a manner that fully satisfied her castmates. And she maintained that stance after the cameras stopped rolling. “I didn’t bully anyone on the season,” she said, emphatically. “I was bold and abrasive in my actions — I was very assertive and the boldest, but I wasn’t a bully. When did I talk down to someone, or hurt someone? I never, ever maliciously hurt someone or sought that out. I was focused on my relationship and people had issues about that.”

Arie also weighed in on his reunion with Krystal, where he told her rather bluntly that he regretted not sending her home earlier after seeing how she behaved when he wasn’t around. “You see one side of someone and watching back you see a whole different side,” he told THR. “With Krystal, that is the case. It was hard to watch all that stuff back, but in the end I made the right decision so it’s all good.”

Though Krystal said she came out of the experience “broken” and referred to the social media backlash she received as cyberbullying, she is still leaving the door open to appearing on summer spinoff Bachelor in Paradise: “If I’m single this summer, maybe!”

Arie’s decision-making led to the other moment of the night that left much to be desired — when Caroline Lunny confronted him about the end of his season, telling him, “I know what you did and I don’t know how you could do that.”

After the taping, Caroline told THR that she was referring to what will be “probably the worst heartbreak” in Bachelor history.

“I’ve spent some time with someone recently and I felt like I had to get this off my chest,” she said, referring to one of Arie’s finalists who will, presumably, get her heart broken by the star. “You hear the story, but when you physically see the person breaking it hurts my heart. So I happened to walk into this reunion show and I couldn’t help but light Arie up.”

She added, “It was so much worse than anything, ever, in Bachelor history.”

When Caroline confronted Arie, all he could say was that what she was referring to will play out in coming weeks. After the taping, he explained his response. “Caroline feels really strongly about something. I really wanted to react to it, but I think Chris really made sure we waited on that,” Arie told THR about not saying too much so as to not spoil the season’s ending. He added, “It’s not anything I wouldn’t want to express to everyone and you’re going to watch that unfold.”

During the taping, Harrison referred to the end of Arie’s season as one that will leave all of Bachelor Nation in shock. Doubling down on earlier comments he has made about the three-hour live event, Harrison admitted that even though he has said this before, March 5 will bring “the most dramatic ending in Bachelor history.”

Despite a finale that will no doubt be controversial, at least for some of the parties involved, Arie said at the reunion taping that he has no regrets. If he could go back and have the option to do it all again, he would because he’s “very” happy.

“It’s always difficult — for me it was especially difficult because I was so open and let myself fall in love with two people and I think that made the whole experience really difficult in the end,” he told THR, adding, “I have no regrets and am really excited about my future.”

Will 'The Bachelor' Bring the Worst Heartbreak in Franchise History?

The penultimate episode of The Bachelor airs Monday at 8 p.m. on ABC. How do you think the finale will play out? Sound off in the comments, below.

Will 'The Bachelor' Bring the Worst Heartbreak in Franchise History?