[This story contains spoilers from the Nov. 5 episode of ABC’s The Bachelorette.]

While America continued to wait for the results of the 2020 presidential race, ABC took a break from election coverage on Thursday night to air a highly anticipated episode of The Bachelorette.

Luring viewers who needed a two-hour escape from the national uncertainty, along with the franchise’s loyal fanbase known as Bachelor Nation, The Bachelorette did indeed deliver its biggest episode of the season. Thanks to spoiler reports, one big question had been looming over the show and now, in week four — as Chris Harrison had promised to The Hollywood Reporter — viewers got their answer.

In an unprecedented twist, star Clare Crawley wrapped her journey early by getting engaged to her frontrunner, Dale Moss, and exited the show. In her absence, former contestant Tayshia Adams made her debut as the show’s new Bachelorette, becoming only the second-ever Black lead of the female franchise.

Only one other cycle in 16 years of The Bachelorette has featured two female leads. The 2015 season began with both Kaitlyn Bristowe and Britt Nilsson competing for votes from the contestants on who would go on to be the star. By the end of the premiere, Bristowe was voted in to lead the season.

This time, however, the shake-up news blindsided the contestants, who had been invested in Crawley for an extra-long amount of time. Filming on the season had been set to begin in March, but was then delayed due to the novel coronavirus pandemic and Hollywood-wide production shutdown. The men had to quarantine and get multiple COVID tests in order to be cleared to appear on the show once production picked back up, and many of them were not pleased to hear that their time with Crawley was coming to an end.

“I’m not going to apologize for love. I truly did not want to waste any more of your guys’ time because you guys have given up so much to be here, and it means everything to me. I’ll apologize if I wasted your time. I’ll apologize if I hurt you. But I’m not going to apologize for love,” she told the group of men, who expressed shock, disappointment and some anger before ultimately coming around to collectively wish her the best.

The episode then played out like a mini-finale, with Moss getting down on one knee after their own version of a Fantasy Suite and time alone without the cameras. The franchise’s resident jeweler, Neil Lane, even appeared on FaceTime and supplied Moss with an engagement ring for the proposal. The pair was last shown cheers-ing with champagne and celebrating their engagement, per show tradition.

After the men were told by Harrison that Crawley and Moss had gotten engaged and left the bubble (the season was filmed in seclusion at a resort in Palm Springs, California, amid COVID-19-era on-set safety protocols), the sequestered contestants were offered a chance to stick around for a second shot at love.

A new Bachelorette had arrived to the bubble — but they weren’t told her identity. 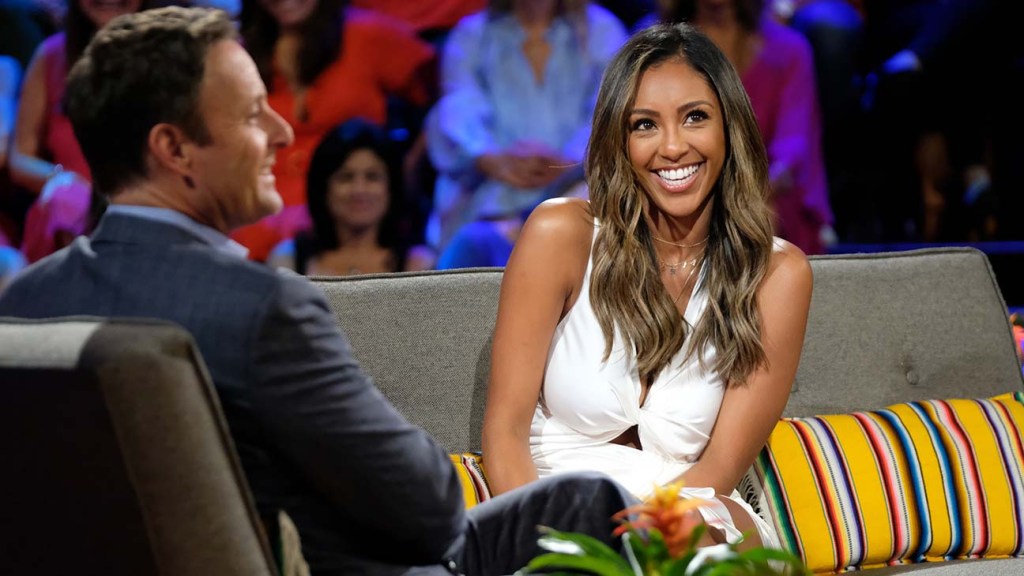 “After months of thinking only about Clare, I have to now switch that? I have no idea if I can do it,” said contestant Riley Christian, echoing some of the group’s concerns. Others, however, were excited. Only a few of the men had spent any reasonable amount of time with Crawley, who had focused her time on Moss. “Clare’s gone. Dale’s gone. Personally I’m very, very excited about a possibility that I never thought was going to happen. Now, we get a fresh start,” said Bennett Jordan.

The men had one day to decide if they wanted to stick around and, ultimately, all 16 did. Outside of where they had gathered, Adams was arriving for a welcome chat with Harrison. “Seeing you makes it more real,” said an excited but nervous Adams after emerging from being sequestered at the resort. “I wouldn’t be standing here, I don’t think, if it wasn’t meant to be.” The episode then ended with a “to be continued” title card as Adams prepared to greet the room of eagerly awaiting singles. Previews for next week show Harrison seemingly introducing another twist when the show returns to its regular Tuesday timeslot.

Bringing in Adams, who hails from the 2019 seasons of The Bachelor and Bachelor in Paradise, was no small feat, given the COVID-era safety protocols surrounding the show. When speaking to THR, Harrison said that there wasn’t one moment that sparked them to recruit Adams into the bubble and get her safely on deck, but rather a gradual realization that Crawley had tunnel-vision for Moss, and that the season might not be able to go on as planned.

“There was nothing about this season that wasn’t extraordinary and stressful and insane,” said Harrison of pulling off the swap. “As producers, you always have to go with the flow and be ready to embrace change, and drama and whatever happens. And we’ve done a really good job of doing that over the last several years. Clare brought us a different circumstance and we had to lean into that.”

Crawley has been viewed as a nontraditional lead for shaking up the show. While Harrison and the producers have defended her for finding love, viewers had been looking forward to the heavily teased and reported shake-up. Before the season, spoiler reports circulated that Adams would replace Crawley.

With many in Bachelor Nation knowing what was coming, the response to Crawley’s run as the lead has been one of support, but also impatience. “If the goal is to fall in love, then you definitely can’t say she did a bad job. She may have done the greatest job ever!” said Harrison, defending Crawley. “If you are angry or mad, are you mad because she fell in love with somebody and are you mad because she’s following her heart? It’s her life and her heart.”

On Thursday’s episode, Crawley defended her choice to throw all her roses in Moss’ basket. “There is that fine line between respecting the process, but also going for what you want. And Dale is what I want,” she told the camera. As the credits rolled on Thursday, the pair was shown enjoying each other in home video. The show will also catch up with them next week for a tell-all.

When speaking to THR ahead of the season, Crawley did not consider her exit to be a shirking of Bachelorette duties. “I can promise you I did not leave early,” she said. “I stayed for my entire journey and the entire process for what worked for me.”

Meanwhile, Adams’ arrival ushers in a more inclusive shift in the franchise, which will air its first-ever Bachelor season with a Black lead when Matt James’ season debuts in January 2021. (Filming on The Bachelor is currently underway at a secluded resort in Pennsylvania.) There is also a diverse group of men still remaining in the competition.

Adams has been a fan-favorite during her time on the franchise, which put her in the running for the this season’s starring role, which ultimately went to Crawley. After placing third on Colton Underwood’s season of The Bachelor, she and John Paul Jones emerged as a likable couple on the summer cycle of Bachelor in Paradise. The pair went on to announce their split the following fall. “You rang… ?!” the star had teased on Instagram, with a wink face, leading up to her debut. The post garnered more than 250,000 likes.

After the west coast episode aired, The Bachelorette marketing team went full steam ahead on promoting Adams on social media, with promos and a full season trailer for Bachelorette Part 2, still ahead.

As for how Adams and the big twist will be received amid the country’s election uncertainty, that’s up to Bachelor Nation.

“The main thing to be happy about is that The Bachelorette has and is always trending No. 1. It’s an escape,” Harrison told THR heading into the week. “People are definitely leaning in and taking it for what it’s supposed to be, which is this great journey. It’s a love story and drama and entertainment. I think people are able to break away from all the politics and the COVID, and all the crazy things happening in the world. There’s enough time to handle all of that — we can take a two-hour break.”