Less than 24 hours since the couple’s first public debut on the annual After the Final Rose live special — which also featured an awkward reunion with runner-up Peter Kraus — Lindsay and Abasolo told reporters on a Tuesday press call that they are focused on their future — and are no longer concerned with any drama that played out in their past.

“When it comes to Bryan, you obviously see that we’re very passionate with each other, but you don’t see the depth our relationship had,” she told The Hollywood Reporter during the call. “There was no drama. It’s crazy the chemistry that we have between each other and how compatible we are. I really wish you could have seen more of that. I wish you could have seen the essence of Bryan.”

Abasolo added that their relationship was drama-free, which is why most of it didn’t make it to air.

“There were no arguments, so that’s not really interesting TV,” he told THR. “There’s a lot of drama on the show, so I think they decided to air that and leave out in-depth conversations.”

The ABC star has quickly come under fire from viewers for breaking up with Kraus the night before Abasolo got down on one knee. The main issue at hand: Kraus’ hesitance to propose after just a few weeks of dating. Through tears, they each shared that they were in love before parting ways. Their split marked yet another first for the historic season, as never before on a season of The Bachelorette has a runner-up not made it to the proposal site.

Even worse, all three were forced to re-watch the drama play out live during the ATFR show.

“I knew that I was already going to send him home, it wasn’t that I had to come to that decision that night,” she said of her and Kraus’ goodbye. “It was hard. I did care about Peter, but it didn’t make me change my mind or question whether Bryan was the one. I questioned whether or not this is too fast, but I never questioned the person. Bryan was the person. I’m only in love with one person through that entire season. I wanted that proposal to be all about Bryan. I wanted him to be the focus.” 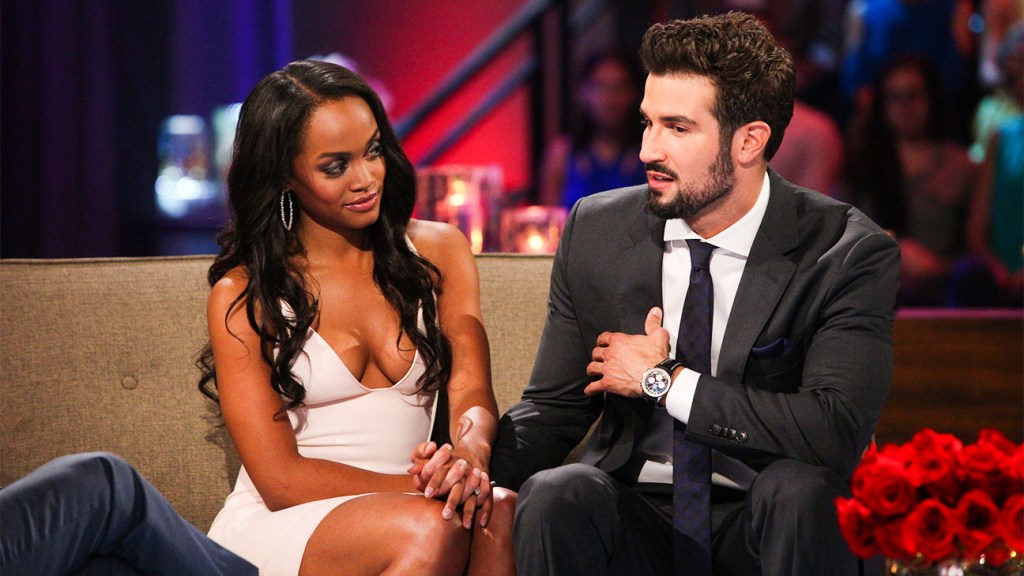 Lindsay continued to defend her decision to break up with Kraus and say yes to an engagement with Abasolo in such a quick turnaround. On the day of, she described her head space: “I told myself how much I was in love with Bryan and how he was the man for me. I wasn’t going to let anything else take me away from this man. I wasn’t going to run away from him.”

She continued, “The proposal became such a focal point, but that was not the reason I decided not to choose Peter. As far as when I started to realize it was Bryan, it was in Geneva when it really hit me. When I was defending him to my family, I truly realized he was the one for me.”

She said that the focus on the proposal is actually giving Kraus an “out.”

'Bachelor' Debate: Who Will Be ABC's Next Star?

She also spoke to any criticism from fans that Abasolo, 37, was her second choice — and not the best one, at that. “I learned a long time ago that nobody knows your relationship like you do,” she said. “I really was smart about navigating these relationships. Bryan is extremely sincere. He’s definitely the most sincere guy in the house. You hear me say he was the most steady and confident man in the house. It baffles my mind how you can still say he’s not sincere.”

Abasolo also offered his take of what it was like to watch his fiance’s dramatic finale. “We’re both very mentally strong. I knew she would only be in love with one man and that happened to be me. It was tough but at the same time … we talked about every single episode. I wanted to see everything [and] if I had any issues, I would straight up bring it up to her.” He said that if he did get annoyed by anything, he got over it in a couple of hours. “We’re well-equipped to handle everything that comes our way.”

Lindsay, a practicing attorney in Dallas, and Abasolo, a Miami chiropractor, plan to tie the knot in December 2018 or January of 2019. In the meantime, the reality TV lovebirds will move in together, but have yet to iron out whether that will be her hometown, his, or perhaps Los Angeles, as Abasolo and Lindsay said they are flexible to work from any of those cities. “I’m thinking a white wedding,” said Abasolo. “I’m going to let Rachel handle all the details of the wedding. She’ll just tell me where to show up and I will be there.”

The Lindsay family has yet to reunite with Abasolo since their tense hometown meeting, but Lindsay did confirm that her father, a federal judge who did not appear on the show, met Abasolo during the show visit. Their encounter was not featured on air. Lindsay also said she has a one-on-one date planned with Abasolo’s mom, who warned her harshly not to break her son’s heart when they met on the show.

“If I had a list, Bryan would check everything off that list,” she said on Tuesday. “He was exactly what I wanted. That’s why I put him through the wringer a little bit.”

'Bachelorette' Rachel Lindsay Defends Her Final Picks: "I Know I Can't Please Everyone"

Lindsay’s engagement to Abasolo in Rioja, Spain was marked by three-carat, pear-shaped diamond ring and one of the more dramatic finales of the series. After a season spent adding many historic firsts to the 15-year-old franchise — and one that has been accused of race-baiting by highlighting race-fueled arguments this season — Lindsay’s choice remains a trailblazing one, as Abasolo, who is Colombian, joins a small handful of diverse winners in the show’s combined 34 seasons.

Before breaking things off with Kraus, Lindsay also eliminated Eric Bigger, the only black contestant of her three finalists, during the triple hour. But it was her reunion with Kraus that left more to be desired.

“He was true to himself, until the very end,” she said, defending her ATFR encounter with her ex and explaining why he might not be the best pick for the next Bachelor. “In this world, in this experience, you have to take a leap of faith. He wasn’t willing to do it. If that’s the person that he is, that’s great. It just doesn’t work for this.”

In the end, she says that’s why she let Kraus go, even when he caved and said he would propose in a bid to not lose her.

“Peter did say that he would propose at the end,” she said. “He said he didn’t want to lose me, and I still said no. At that point, I had already made up my mind that I was sending him home. I did not want to bring two guys to the proposal if I knew what I was going to do. It’s confusing to me that people think I would settle for such an important decision just to get a ring on my finger — I didn’t do all of this just to get a ring at the end of this.”

As for who she does think should be the next Bachelor, she praised Bigger but ultimately went with a lesser-known contestant: Alex Bordyukov.

“You didn’t get to see enough of him,” she said of the Russian contestant. “He’s funny. He’s quirky. He’s very, very smart. He’s a serial monogamist and I think he would be great.” Abasolo seconded: “He would be the most interesting season — and he can dance!”

As for Kraus, he also spoke with reporters on Tuesday and said he is still processing his thoughts about taking the Bachelor leap. “Consider? Sure. As of right now, am I thinking about it? No,” he said. “Last night was really tough. This entire process has been tough on me. I know as soon as I get back home, I’m going to jump right back into it to process all of this and not get there just yet with that potential step.” Read his full interview here.

What do you think of the finale and how Lindsay’s journey played out? Tell THR in the comments below and head here for full Bachelorette coverage.