As The Bachelorette rounds its final corner before the season finale, eyes are on the ABC franchise to see how the reality dating competition will address this season’s off-air controversies.

The 14th season of the long-running dating franchise had much hype heading into its April 3 premiere. Lead Becca Kufrin had been blindsided on national television during the prior season’s The Bachelor and America was rooting for her to find love in response. Shortly after its debut, however, her season was hit with lingering stories about two of her contestants.

Early frontrunner Garrett Yrigoyen — who is now a top-two finalist heading into the show’s Aug. 6 finale, along with Blake Horstmann — came under fire for offensive social media behavior in the show’s first week. Since contestants don’t do press until they are eliminated, Yrigoyen took responsibility for liking “hurtful” posts in an Instagram statement. Kufrin briefly addressed the situation, since the information came to light after production had wrapped on the finale. “I came into this knowing I was going to meet a handful of men who came from different backgrounds and different walks of life, and I wanted to just be open to everyone, and I hope that the viewers can do the exact same thing,” she had told The Hollywood Reporter.

The incident sparked conversation about the show’s casting process, since Yrigoyen was not the first contestant in Bachelorette history to later be exposed for social media views that would be problematic for the lead. But that conversation was accelerated after another one of Kufrin’s contestants, Lincoln Adim, was convicted of indecent assault and battery after he filmed the show. News broke of his conviction while Adim was still a contestant on the season and he has yet to comment, despite his elimination on the July 2 episode.

The Hollywood Reporter attended the recent taping of the Bachelorette: Men Tell All reunion episode in Los Angeles, which reunited Kufrin with her exes and will air on July 30. All of the notable contestants who were eliminated were in attendance — except for Adim. The contestants who are still in the running — Yrigoyen and Horstmann — are also never present.

With both Yrigoyen and Adim absent, the reunion steered clear of the off-air controversies and instead focused on the drama that viewers have seen unfold on the cycle, which has been gaining in viewers in later weeks. In their absence, veteran franchise host Chris Harrison wanted to make one distinction clear.

“I want to be very careful about people that put Garrett and Lincoln in the same sentence because they do not belong in the same sentence,” Harrison told THR after the taping. “What Garrett did is something that people disagree with. What Lincoln did is illegal. It’s against the law. He committed a crime. He was convicted of that, so that’s very different.”

He continued, “And it’s been very upsetting that people have been lumping them together as if it was all just one thing or it’s all the same thing and it’s not. That’s not to say that I agree at all with what Garrett did or if he stood for that or what he stood for, but I’m very careful to differentiate those.”

The reunion episode tapes in front of a studio audience, and in the past the franchise has used the show as a floor to address controversies that have unfolded after production on the season wrapped. This season, viewers will have to wait until the live post-finale special, After the Final Rose, to get more answers.

When speaking to THR, Harrison did not have any specifics to reveal in terms of how ABC or producers Warner Bros. TV plan to change the show’s vetting process. After Adim’s conviction broke, WBTV said they were investigating with a third-party company as to why Adim’s background check didn’t turn up the case.

“We’re always diligent, we always do our best to protect everybody and keep everybody safe, and to get the type of people that you would want to be represented on this show,” said Harrison, who is also a producer on the show. “The folks at Warner Bros., the folks at ABC, people farther up the food chain than I am, are going to make those decisions if any changes are made.”

'Bachelor in Paradise' Couple Opens Up About the Franchise's Casting Woes

Yrigoyen’s situation, however, is more complicated than Adim’s on another level. He came under fire for liking questionable posts on Instagram, not for posting them directly. That behavior, as Harrison acknowledges, is harder to track.

“Social media, I’ve said from a father’s standpoint, is the worst thing in the world,” said Harrison, who often doubles as a mentor figure for contestants during the show. “If I could have one wish, I would take Facebook, Twitter, Instagram, Snapchat, all of it, and throw it in the trash. I think it continues to do more harm than good, especially now. You get a lot of yelling, you get a lot of the lowest 1 percent — the vocal minority, as I call it — and that’s usually who you hear from. Regular people are out living their lives and raising kids, and just hoping to make their life better from day-to-day.”

Still, he adds, “But the fact is, it’s a way of our life and it’s something we have to deal with on the show.”

This season has seen an unprecedented amount of contestants taking to social media to address backlash they have received online and through various platforms. Contestant Chris Randone said he received hate mail and death threats over his “villainous” behavior, top-four finalist Colton Underwood asked followers for their respect after revealing his virginity; and former Bachelor star Tia Booth took a weeklong hiatus from social media after the backlash she saw from her Bachelorette cameo. Kufrin even took to her Instagram story in Booth’s defense because of the intense response. (All three of those contestants will also be appearing on summer spinoff Bachelor in Paradise.)

Harrison in the past has highlighted some of the social media and slut-shaming that participants encounter, as was evidenced by his 2015 Men Tell All chat with lead Kaitlyn Bristowe when she was cyberbullied for her sexual relationships on the show.

“Here’s the thing — I don’t know if anyone’s ready for that kind of spotlight,” Harrison continued. “I don’t think that anybody in this day and age is ready for the mob mentality and that’s what it’s become.” Making it clear that Adim is a separate situation, he adds of how the contestants’ lives are picked over: “It is a mob mentality of — you’re guilty, your life is ruined, it’s done, you’re gone. That is the scrutiny that everyone is under.”

Kufrin, for her part, still wants viewers to keep an open mind. When speaking to the star after the Men Tell All taping, the lead — who is engaged to her winner — had the same message for viewers as she did when the controversy began.

“I’ve asked this since the journey began, but I want people to stay open to who these guys are,” Kufrin told THR. “I was lucky enough to go on this journey with 28 guys and to really get to know them for who they are — away from social media, away from all the distractions — and so that was something special for me that I got to experience and i just hope that the viewers can be that same way.”

And she still has no regrets: “I think that living day by day, I handled things how I would want to be treated. I really hoped to give the guys any clarity or answers or respect in any given situation, and so overall, I think stayed true to who I was and followed my heart.” 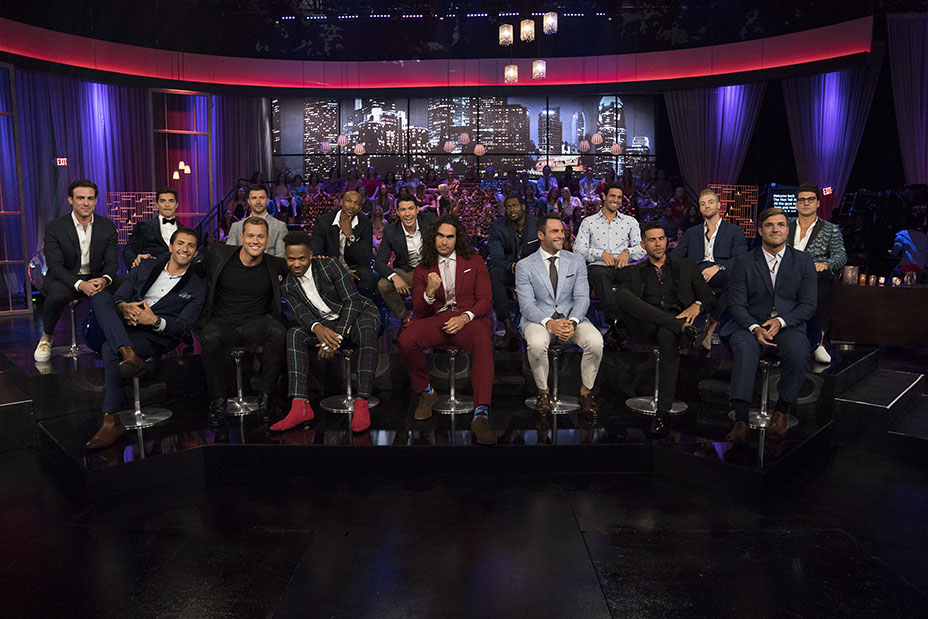 The Bachelorette: Men Tell All airs July 30 at 8 p.m. on ABC. The season concludes with the finale and After the Final Rose special, where Kufrin will appear with her new fiance and runner-up, on Aug. 6.

Chris Harrison on Keeping 'The Bachelor' Relevant After 16 Years