The Bachelor in Paradise controversy might have been the talk of the summer, but when DeMario Jackson returned to the TV franchise on Monday’s Bachelorette: Men Tell All, all Paradise mentions were left on the cutting room floor. The ABC reality franchise instead chose to keep its sister shows separate, and focus on The Bachelorette‘s most-talked-about topic: racism.

A large chunk of the two-hour TV event put Lee Garrett on the hot seat. During his time on the show, the white contestant, a singer-songwriter from Nashville, was accused of picking fights with black contestants. Simultaneously as the show was unfolding, racist and misogynistic tweets he had sent before joining the season — which features the most diverse cast in the series’ 15-year history — were unearthed.

“I’m not in the house and I only know what’s happening right in front of me, so to sit back and see things that I’ve never seen before, it’s very enlightening,” Rachel Lindsay, the first black Bachelorette, told host Chris Harrison of the race-fueled conversations and battles that happened between the contestants when she wasn’t around. Speaking directly to Garrett, she told him that he had an amazing opportunity to be surrounded by different people and cultures that he took for granted: “I hope that in watching it back, you realize that you were a part of something so great. But in case you didn’t, please know that you can exit stage left and meet me backstage and I will be more than happy to give you a black history lesson, a lesson on women’s rights.”

Before Lindsay made her grand entrance, confronting nearly two dozen of her eliminated ex-boyfriends, Garrett was forced to address his racist behavior before a live TV audience, his former housemates and now, the millions of Americans who watched Monday night.

“It’s a hard thing to say that you were, or are, a racist,” Harrison said, prodding Garrett to own up to his offensive words. Harrison even displayed the unearthed tweets multiple times. One, in which Garrett compared the KKK to the NAACP, ignited a collectively inspired response from several of the contestants, including a fiery Jackson.

But it was Josiah Graham, a 28-year-old prosecuting attorney, like Lindsay, who vocalized his feelings most poignantly.

“Why did you come on the show where the Bachelorette was African-American?” he asked Garrett directly, “If, on the other hand, you’re tweeting about black people and groups of black people who fought and died so I can be on the stage next to you. People came before me so that I can go to the same school like you, so I can drink from the fountain like you, and if you’re comparing them to the KKK, people who hanged my ancestors — why are you trying to date a woman who looks like me?” 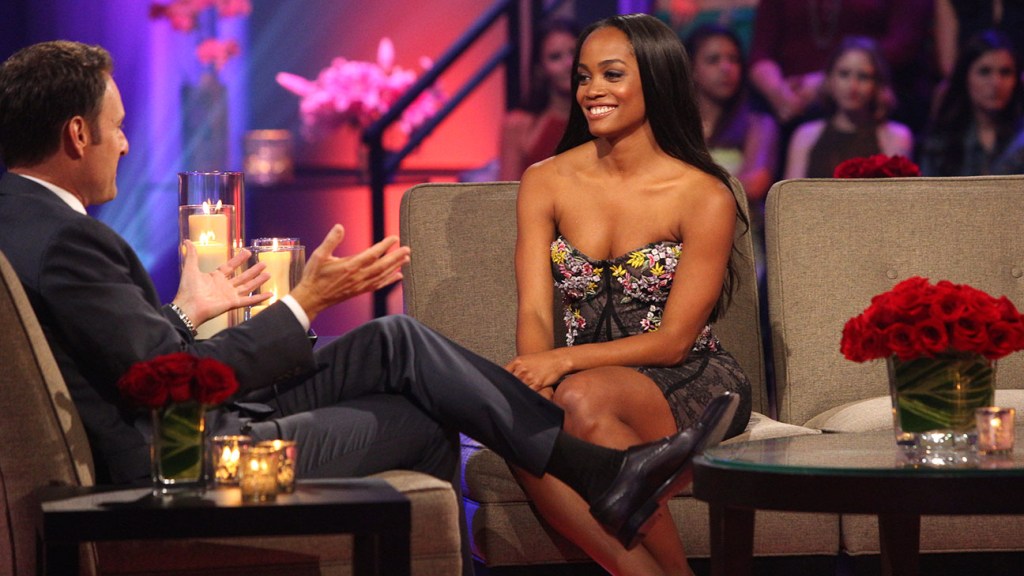 Though Garrett was at first talking in circles and refusing to own his behavior, he eventually listened to what his fellow contestants, many who are black, were saying and finally heard them.

“I completely denounce that, and I denounce that Lee,” he said, shaking, about his previous tweets. “I want to learn. … I’m sorry for saying things when I was not educated and ignorant in those subjects. That tweet was racist and I denounce it.”

For a reunion special that usually reserves its most emotional moments for the Bachelorette to confront her heartbroken and scorned exes, the teaching moment was a powerful one.

“I thought it was interesting and as the host of the show, I allowed it go on for a really long time tonight because I thought it was a really positive dialogue,” Harrison told The Hollywood Reporter, who attended the taping, after the reunion show was filmed recently in Los Angeles. “If it had turned ugly, then I would have put a stop to it because that’s not productive, but I found tonight very productive. I found the dialogue helpful to Lee, and I was really impressed and respected the way the guys responded. The way they were talking — Anthony, Kenny and even DeMario, I really respected the way they were handling it. It wasn’t anger, they weren’t spewing venom and name-calling. They were extending an olive branch and really trying to educate him. So that’s why I allowed it to go, and hopefully something will come of that. Maybe a dialogue here in the country, because God knows we need it. Right? And if nothing else comes of this silly show, maybe that will.”

The men, even Kenny “‘Pretty Boy Pitbull” King, a black wrestler from Las Vegas who received most of Garrett’s antagonism on the series, accepted Garrett’s recognition. Later, Garrett also offered a full apology to Lindsay.

“I know I’m the first,” Lindsay had told Harrison of her historic turn as a black Bachelorette. Still, the continuous thread of racism was something that surprised her as she has been watching the show air, since it didn’t motivate her decisions during filming. Of her final three men, one contestant, Eric Bigger, is black; another, Bryan Abasolo, is Colombian; and Peter Kraus is white. Lindsay has already revealed that she is and remains engaged to her final pick.

“I’m black,” she said to Harrison on the special. “I knew it would be something to talk about, but it wasn’t something that we had to continually go on and on and on about when I had the relationship with the men, which I appreciated. They were trying to get to know me. Race wasn’t an issue for me as I was going through the season. No one made me feel when I was with them one-on-one a certain way.”

'The Bachelorette': Rachel Lindsay Heads Into Finale With a Twist

While speaking to THR, Harrison also praised Lindsay’s handling of the pressures that have come with her groundbreaking journey.

“I don’t think she fully comprehended all it was going to entail until she went through it,” he said. “That being said, I think she handled it like a champ. I have so much respect for her. She handles it with such grace and poise. And what I really appreciate is that she won’t blow smoke up your backside, she’ll tell you it was tough. She’ll tell you it was difficult — the good, the bad and the ugly. I like that she’s so candid.”

He continued: “I think more debate and dialogue like [tonight] needs to happen. We need to be able to say, ‘white,’ ‘black,’ ‘racism.’ I like those conversations, and they make people so uncomfortable. But if they make you uncomfortable, then that’s clearly something you need to talk about.”

Chris Harrison Explains How 'Bachelor in Paradise' Will Change, Post-Controversy

At the end of the Men Tell All special, Harrison finally mentioned the elephant in the room when he asked — to the surprise of a shocked Jackson — who wants to see a preview of the “exciting and already-controversial” upcoming Paradise season, which kicks off Aug. 14? “That’s not going to happen tonight,” he then said, teasing that the preview won’t be airing until Monday, Aug. 7, during the After the Final Rose special. Harrison did, however, offer this tidbit about how the franchise plans to address the controversy that suspended filming for nearly two weeks: “Don’t miss the dramatic Bachelor in Paradise premiere, where we’ll talk about everything that happened — and I do mean everything.”

Next week sees Lindsay picking her winner, and current fiance, when the three-hour live Bachelorette finale event airs Monday at 8 p.m. ET/PT on ABC. Keep up with all of Live Feed‘s show coverage here.

Sydney Odman contributed to this story.

'Bachelorette' Star Dean Unglert on Being the Next Bachelor: "I Don’t Think I'm Ready Yet"

'Bachelorette' Star Dean Unglert on Being the Next Bachelor: "I Don’t Think I'm Ready Yet"