About four months have passed since Bachelor Nation watched Bryan Abasolo get down on one knee to propose to Bachelorette star Rachel Lindsay. After narrowing down the most diverse cast in the history of ABC’s long-running franchise, Lindsay picked Abasolo, 37, a Colombian chiropractor from Miami, Florida, and the pair remain engaged.

While the most recent Bachelor franchise couple prepares to tie the knot, a new star will soon embark on the franchise. Arie Luyendyk Jr., first seen on Emily Maynard’s 2012 Bachelorette season, kicks off his turn on Jan. 1. Ahead of the Bachelor season 22 premiere, The Hollywood Reporter caught up with Lindsay at her recent engagement party in Los Angeles to hear what her and Abasolo’s post-reality TV life has been like, now that the cameras are finally off.

Lindsay opened up about the backlash over her pick of Abasolo, how they powered through to remain one of a handful of success stories from the long-running franchise, and revealed to THR that there’s still one big question up in the air. “Is it Dallas? Is it Miami? Is it L.A.?” Lindsay asked of where the pair will be ultimately settling down.

Below, Lindsay, wearing Vow To Be Chic’s newly released the “Rachel” bridesmaid dress, shares more details about life after the reality dating show and opens up about how she envisions their wedding day — which she now says is set for 2018.

10 Takeaways After Revisiting Arie Luyendyk Jr.'s Turn on 'The Bachelorette' 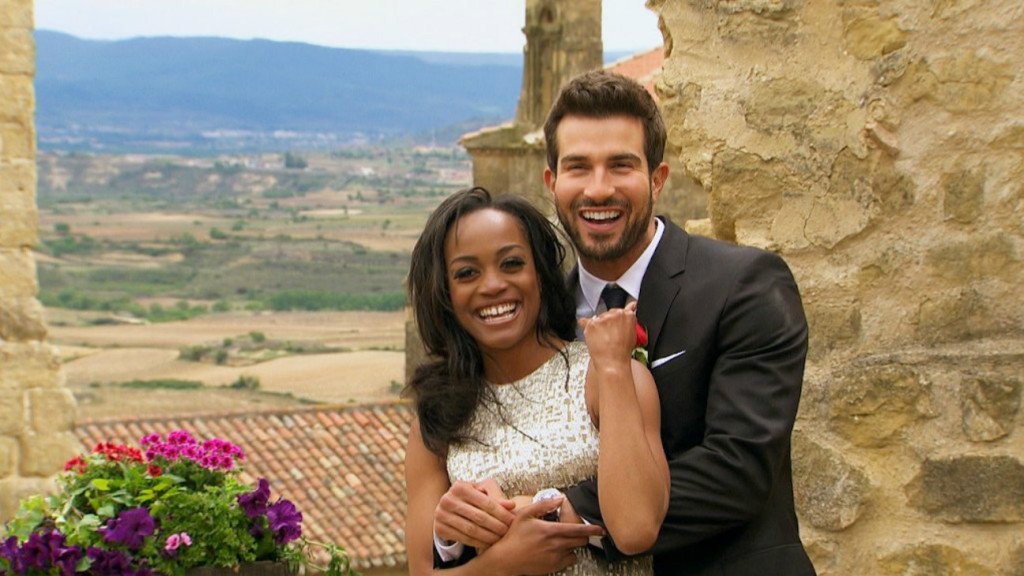 What has this chapter been like for you since Bachelor Nation last saw you on TV?

Being engaged — not that I didn’t see it happening for me — I just didn’t see it being so easy and effortless. It started off as a fairytale, but the way that Bryan and I are with each other, it’s like I found my best friend that I’m in love with at the same time and that’s so hard to find, especially on TV. This is never the route I thought I would go to get what I have, but it’s a beautiful thing and I’m so happy. I tell everyone, “Bryan’s the easy part.” Now we’re trying to blend our lives together. But being with Bryan — effortless.

We’re getting to do so many amazing things together, like a power couple, as best friends. As Bryan and Rachel, the engaged couple. I think that’s so great! We both had professional careers before, and still. He’s a chiropractor. I’m an attorney. Being on TV and all of that has given us a chance to pursue other avenues that we have as well, and we also get to do those things together. I have a platform I can use for women empowerment. I never would have had that opportunity had I not done this whole process a year ago.

So, you and Bryan are maintaining your same jobs?

Yes. So, Bryan actually just got licensed in Texas and then he’s working on finishing the ethics part in California because we are trying to keep our options open. I still practice part-time with my firm Cooper & Scully, P.C. in Dallas. They’ve been amazing in allowing me to have the flexibility to come in and out and work remotely.

What kind of challenges have you faced since the show wrapped?

When the show initially wrapped, it was really hard because we received a lot of criticism about the finale and my choice. People questioned my love and relationship with Bryan. So initially, it was very hard. But we really were just honest with each other and communicated about what we were feeling and how everything was affecting us. That communication was like the foundation of our relationship, and getting through that has made everything else so much easier. We really leaned on each other. We were really honest with each other, and getting over that hump allowed us to be even stronger. That’s what’s been the driving force of our relationship being so great and strong.

'The Bachelor': Age Will Be This Season's Hot Topic

On the topic of women empowerment, I want to ask if you think there is anything you would change about the nature of the dating show, given the current conversation in Hollywood regarding sexual misconduct?

My experience on the show was great. I was the most skeptical person in this entire process. I didn’t watch the show. I didn’t necessarily think this was going to work for me, and I have nothing but positive things to say about this experience and my involvement on the show. From being a castmember in the house, to working on the complete opposite side with the producers, executive producers and CEO, everything was great for me. And if you know me, you know I’d be already speaking out if it wasn’t. I have nothing but positive things to say about the entire Bachelor franchise.

As you’ve developed your own voice in the entertainment industry, how do you feel about individuals using theirs to speak out with allegations of misconduct in Hollywood?

I think it’s great. I think it’s a shame that people before felt like they couldn’t say anything, but I don’t think it’s ever too late. If something happened to you, if you feel like you were wronged, you should speak your piece. And I’m happy to see women brave enough to do that.

Now for a fun rapid round of questions about your wedding. Have you chosen your wedding colors?

No, not at all. Yellow’s my favorite color, but I don’t know if I’ll go with yellow. I’m thinking gold.

What about your flowers?

There will be flowers. There will not be red roses.

Is Copper [Lindsay’s dog] going to be the ring bearer?

Oh you know Copper’s going to be in the wedding. He will definitely be a part of the wedding.

Have you thought about who you’d like to have as your bridesmaids?

It’s hard because at this point I’m 32, and I’ve met a lot of good friends along the way. It’s funny because a lot of the Bachelor girls think they’re going to be in the wedding. I don’t know. I think at this point I might just stick with my sisters. I have two, and Bryan has two brothers. That might be the easiest thing to do. And then I’ll give rows to the others. My sorority sisters will have a row. The Bachelor girls will have a row.

Is Chris Harrison getting an invitation?

What about your engagement ring designer, Neil Lane?

Of course, Neil Lane. I need him to make my wedding band. Are you kidding me?

Do you envision what you will be wearing?

I want to wear a suit. I want to do something different. Maybe a high-waisted pant. Maybe satin, wide-legged, a lace underneath. Clean cut. Very sexy. And then a blazer with like shoulder pads. I’m thinking sleek, long hair and a bold red lip.

If you had to describe the look you’re going for on your wedding day what would it be?

How is Abasolo going to top that? What is he going to wear?

Bryan is sexy in anything. I’m always trying to keep up with Bryan. He is just a very tall, dark and handsome man. So I’m not worried about that.

I don’t know. I want good music at my wedding, and I’m very picky about it. So I really have to think about that one. It has to be special, hopefully a live performer. Well, my favorites have passed away. I’ve always said I wanted Prince to perform at my wedding. So, I don’t know yet.

Are you still thinking early 2019?

No, now I really want to get married in 2018. I just don’t know what time of year. I originally said winter and then our parents said, “Please don’t. Traveling is hard.” Then we said fall, and now I’m like, “I could do the spring.” But you hear me talking. I have made no wedding plans so it’s not realistic. I’m just throwing out dates here, but definitely 2018.

Are you leaning towards a certain location?

Now we’re actually thinking of maybe Colombia. Someone threw that out there and I thought, “That’s a really good idea!” Bryan still has a lot of family there. 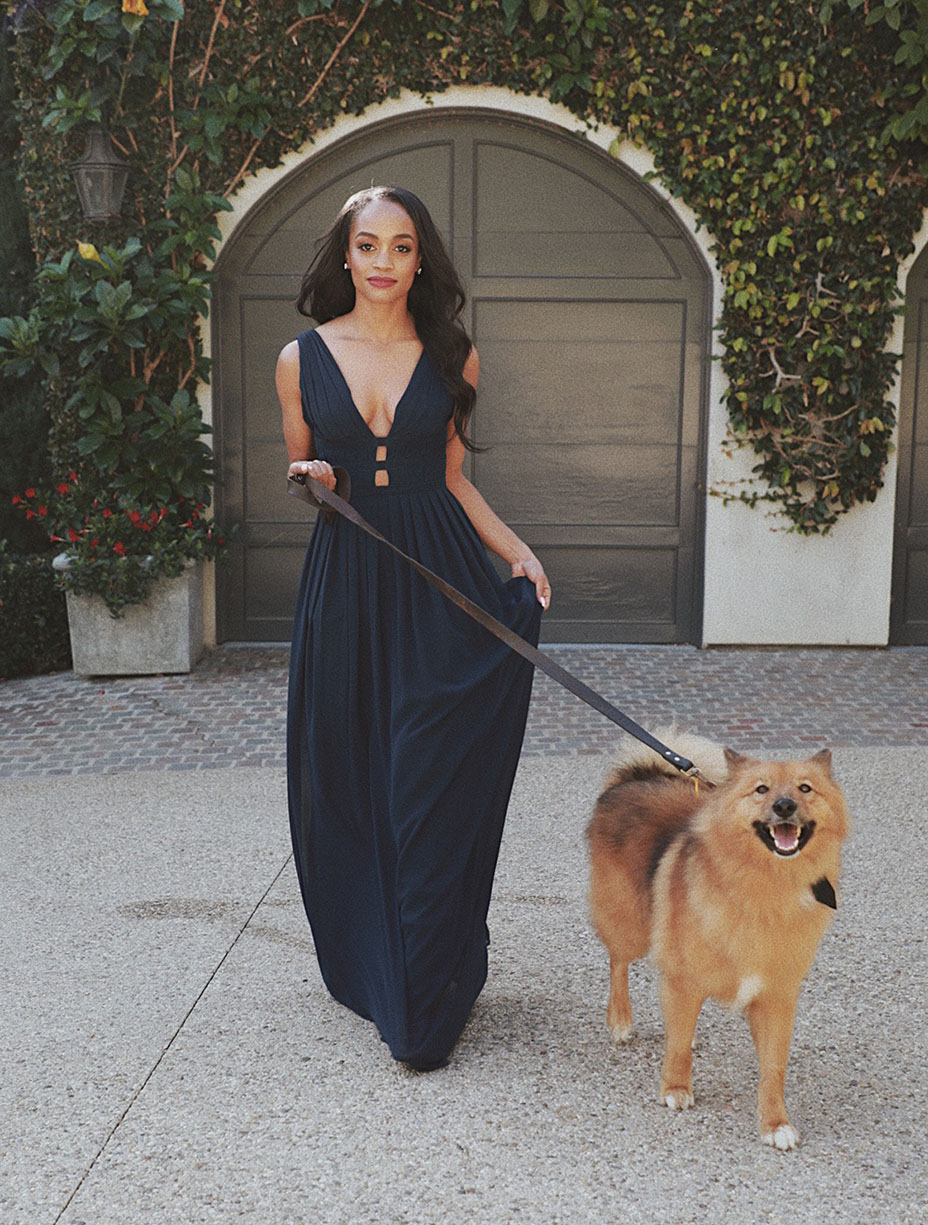